I’ve been a fan of Wolcen: Lords of Mayhem from the start, but with how long things went quiet after the initial post-launch updates, I was starting to get worried. Thankfully, the silence has now been broken with the launch of the first Chronicle, Bloodtrail, which brings with it plentiful polishing as well as new content.

The first thing I noticed when logging in after the Bloodtrail update was how much the game balance has improved. Wolcen always had an issue with spikey difficulty, with certain enemies being wildly more challenging than other monsters of the same level. Soul Demons and those Punisher Exoskeletons were particularly bad offenders.

However, those outliers have now been brought down to the average level. All higher end monsters are now roughly equivalent in difficulty, preventing you from feeling like you hit a brick wall every time you run into a Soul Demon.

Story bosses have also been toned down some. They’re still challenging, but no longer unpleasantly so. I also noticed that player power seems to have increased quite a bit. After the Bloodtrail patch, my main went from being unable to do Wrath of Sarisel challenges at all to earning the highest possible score on my first try.

There are some smaller but still welcome improvements, as well. Something that I didn’t see in the patch notes is that dying and transmoging your gear no longer has a gold cost. This is a very welcome change for the fashionistas among us, as the old costs were prohibitive for low level characters. Now our alts can take full advantage of the account-wide appearance library. 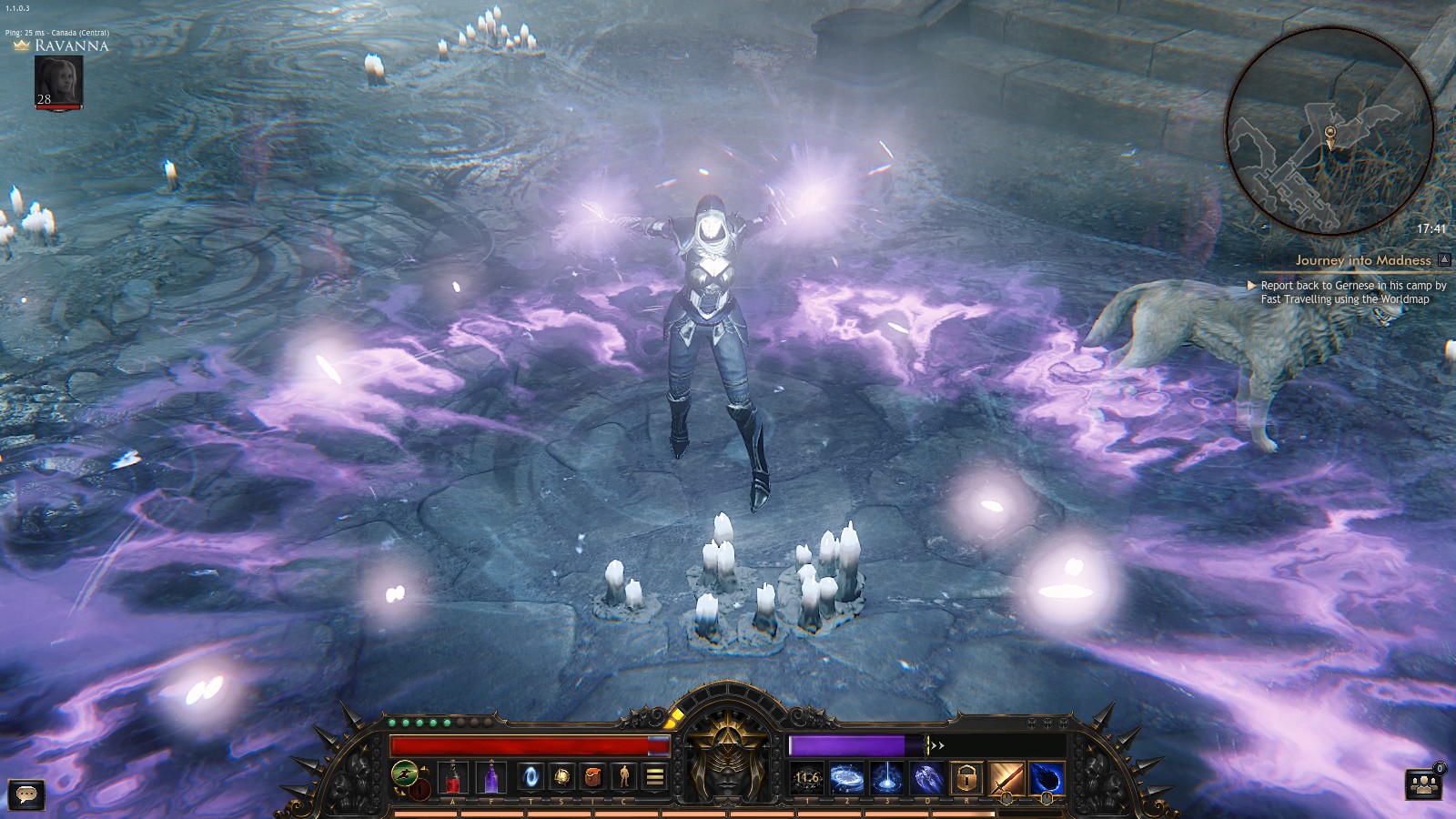 There have also been more maps added to Champion of Stormfall expeditions. Some of these are new tilesets added in the patch, while others are based on maps from the base game that weren’t previously used in expeditions. Adds some much-needed variety to the inevitably repetitive endgame grind.

Across the board the game now feels more polished, less stressful, and more fun. It reminds me of playing after the Reaper of Souls pre-patch, which improved nearly every aspect of Diablo III. It feels like Wolcen is starting to hit its stride.

But of course the real headline of this patch is the new Bloodtrail Chronicle itself.

Chronicles are Wolcen‘s answer to Diablo III‘s seasons or Path of Exile‘s leagues: seasonal content that offers new rewards and activities for newly created characters. For all the ARPGs I play, this isn’t a style of content I’ve ever really gotten into before. I enjoy leveling alts, but needing to start over from scratch without support from one’s main never sat right for me. However, I enjoy Wolcen enough I was willing to give it a shot this time.

As always, the greatest struggle of leveling a new character in Wolcen is settling on a build, because there are just so many good options. Bloodtrail added new elemental modifiers for nearly every active skill in the game, so the options are now even more vast than they once were.

I eventually settled on a tricksy shadow mage, who uses crowd control and illusions to evade her enemies whilst obliterating them with burst attacks and high crit chance. I modified Anomaly to create two large vortices that continually pull in and damage enemies, upgraded Winter’s Grasp to freeze enemies at range, and then brought the pain with Solarfall, Consuming Embers, and the newly added Talon Shot, all modified for shadow damage.

The enemy could barely move, and even if they did reach me, my active dodges left behind explosive illusions to further trip them up. 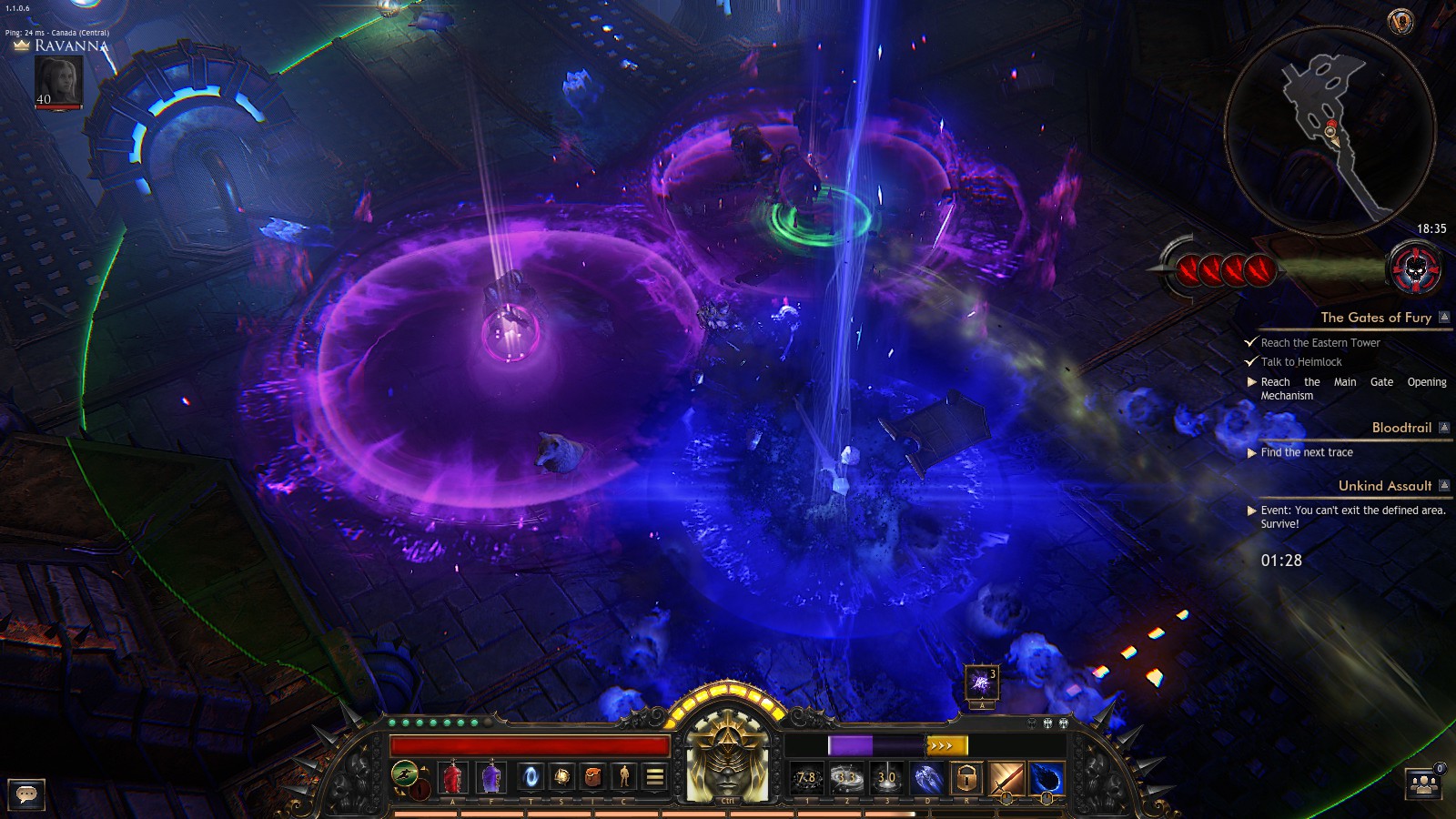 It’s also a very pretty build. Double Anomalies plus Solarfall has a real “the cosmos bends to my will” feel, and I love the aesthetic of Talon Shot. More games should let me swarm enemies with flocks of explosive shadow ravens.

Of course, a new character and a new build demands new content. The big ticket feature of this first Chronicle is the new Hunts system. Appearing randomly throughout the story campaign and Champion of Stormfall, Hunts have you following a path of destruction to locate and confront a mini-boss.

Along the way, you will encounter a number of traces of the boss’s passing. Interacting with a trace allows you to choose modifiers for the hunt. One might increase the boss’s damage in exchange for higher drop rates, while another might trigger an immediate onslaught of enemies but guarantee a rare drop from the boss. There’s quite a lot of them, so no two Hunts ever feel quite the same.

Each modifier also comes with a short paragraph of flavor text, and they often form chains that tell mini stories over the course of the Hunt. It’s a level of effort they didn’t have to go to, but which I really appreciate.

A new update like this also wouldn’t be complete without new rewards. Bloodtrail introduces a new vanity pet system, as well as several new cosmetic gear sets (some of which can be claimed even by non-Chronicle characters).

Furthermore, Hunt bosses have a chance to drop items with new “tributary” affixes. These add an additional bonus in exchange for a penalty — +50 health, but -3% critical strike chance, to use a hypothetical example. In Champion of Stormfall, hunt bosses also drop a currency that can be used to buy tributary gear from a new vendor. 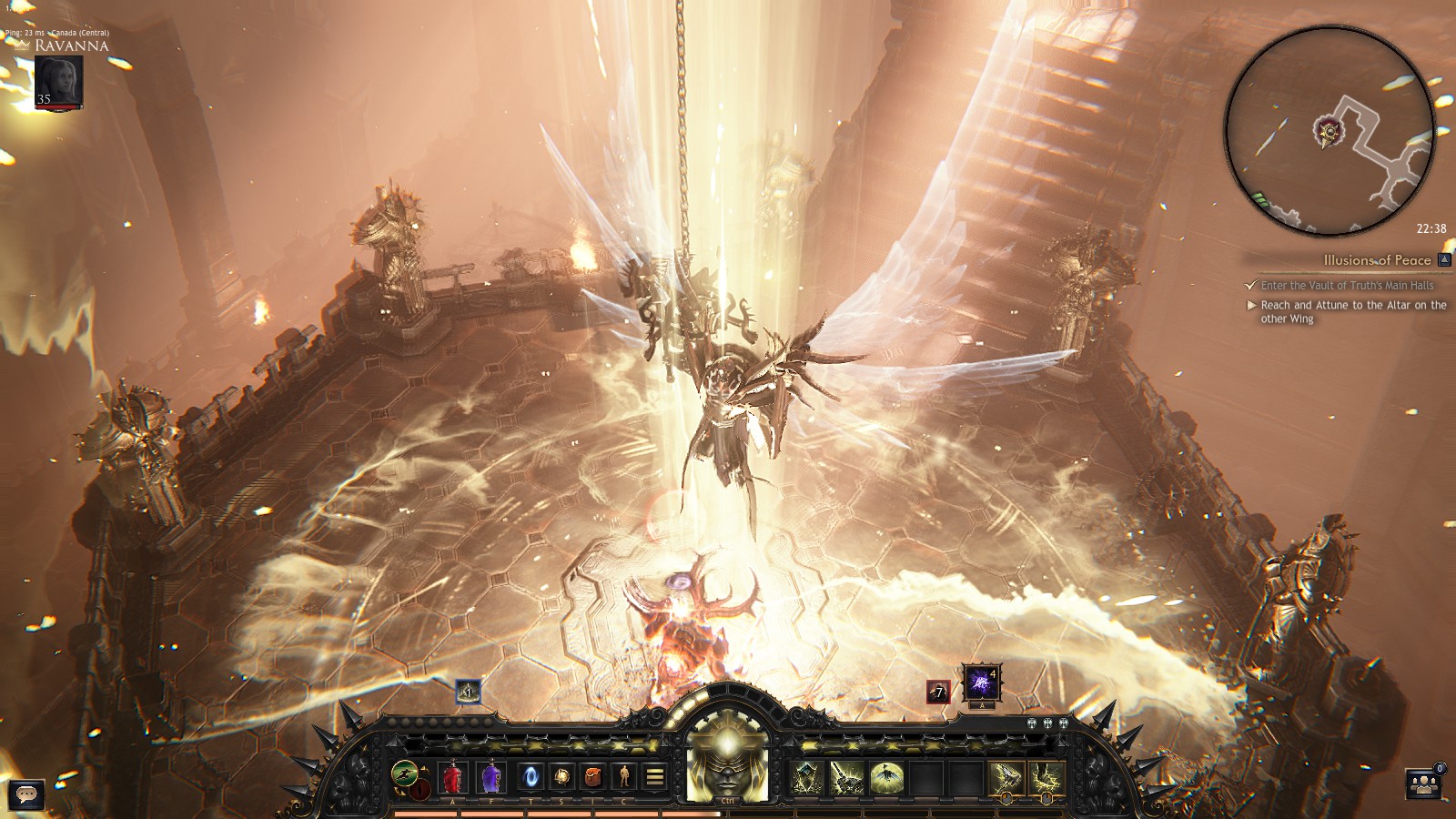 To be honest, the tributary gear doesn’t thrill me; it doesn’t feel that different from regular gear. But overall I do find the hunt system a quite positive addition. It brings some welcome variety and unpredictability to running familiar content, and the mini-stories add some nice texture to the world.

Speaking of story, Bloodtrail brings with it some new story content. There’s a short new quest in the main campaign that introduces a new faction, and once you reach Champion of Stormfall with a Chronicle character, you can explore a new storyline featuring said faction.

Unfortunately, this new story does not resolve the cliff-hanger left by the base game, but it is a good ride in its own right. I initially took it as a bit of a sidequest (albeit a quality one), but the ending hints that these events might become important to the greater story in future.

I wasn’t keeping an exact count, but it’s about 3-4 hours of new story overall, which is pretty good for a free update.

I do have a few problems with the delivery of the new story. One is that it’s only accessible to Chronicle characters, and you can’t jump into Champion of Stormfall on a Chronicle character until one of them has beat the campaign. I kind of wanted to redo the campaign anyway, so it didn’t bother me so much this time, but I wouldn’t want to have to reroll from scratch every time there’s new story. Hopefully future story updates will be more friendly to veteran characters.

Also, the final boss of this new storyline is a bit of a pain, which is frustrating given how much Bloodtrail improved balance elsewhere in the game. The boss has become a bit more manageable following some bug fixes, but it’s still leaning more towards exhausting than fun. 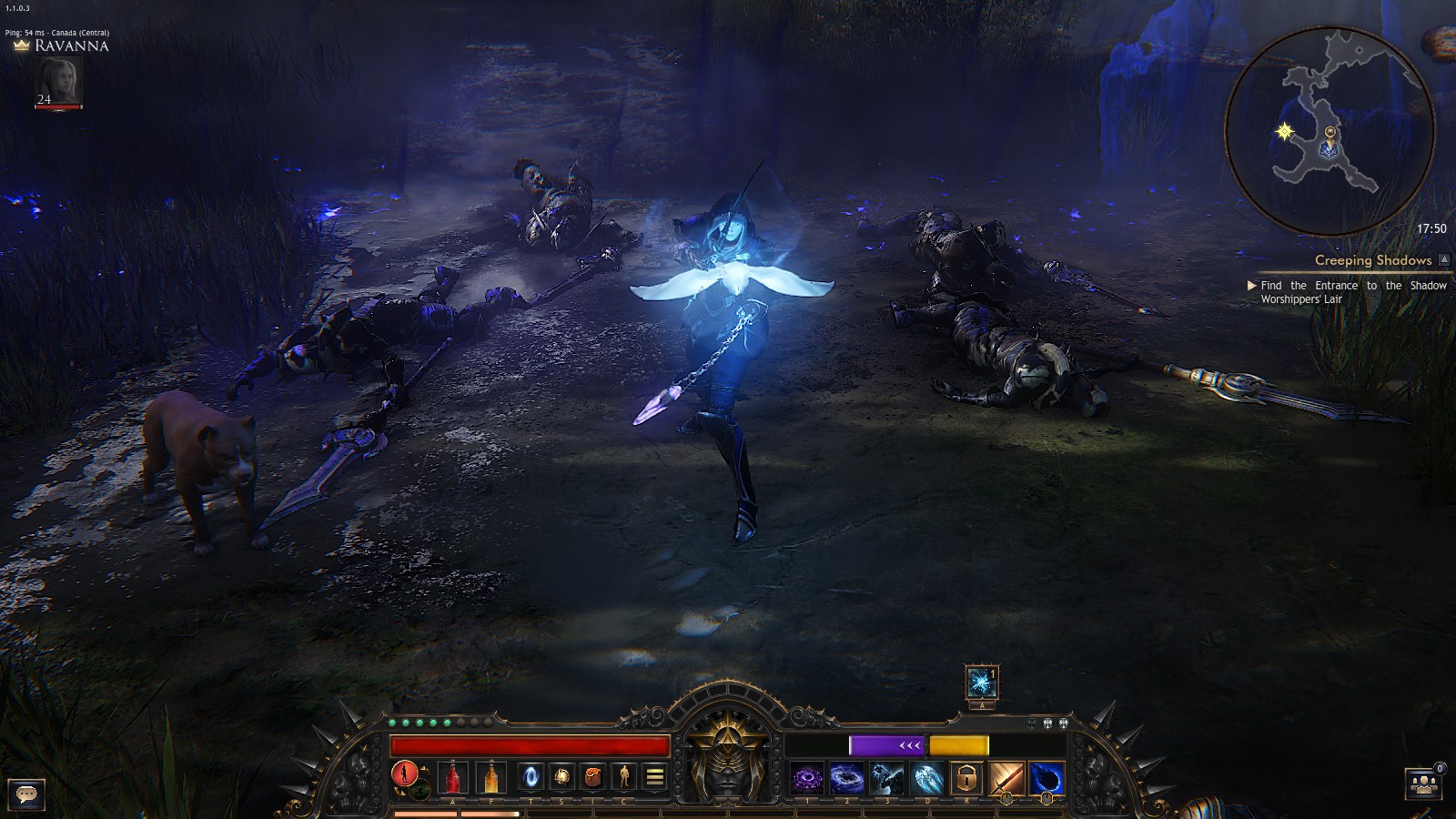 Those minor hiccups aside, this is a strong update that has elevated an already solid game. If you were waiting to give the game a try or have drifted away, now is the perfect time to dive in, again or for the first time.