Rome wasn’t built in a day, and neither will Wolfy Starflight Concern. The time I spent this week on the Legends rogue server of Star Wars Galaxies pretty much reaffirmed once more that this sort of thing is absolutely a marathon, though I had to do a few more arbitrary steps beforehand.

The plan was to both craft a few things for my new houses as well as dig a bit into deeper gathering matters like chasing resources and placing harvesters, but before I could really chase any of those pursuits, I had to first go after the ability to rotate furniture, which was gated behind the completion of some Collections. It was basically a scavenger hunt where the clues weren’t clues but specific coordinates to various furnishings that were placed in skewed directions at pretty much every planet in the galaxy.

On the one hand, this really felt superfluous. I was asking questions like why this would be a feature that was locked behind an item hunt if the item locations were just being fully shared, or why I had to write a couple dozen macros in order to use furniture movement features. On the other hand, I also am a player if FFXIV, and so I’m kind of used to both kind of gnarly and not fully featured furniture placement as well as basic quality-of-life features like haircuts, dyeing, and gear customization being gated behind a quest line. So, not a dealbreaker, but certainly a mild annoyance. 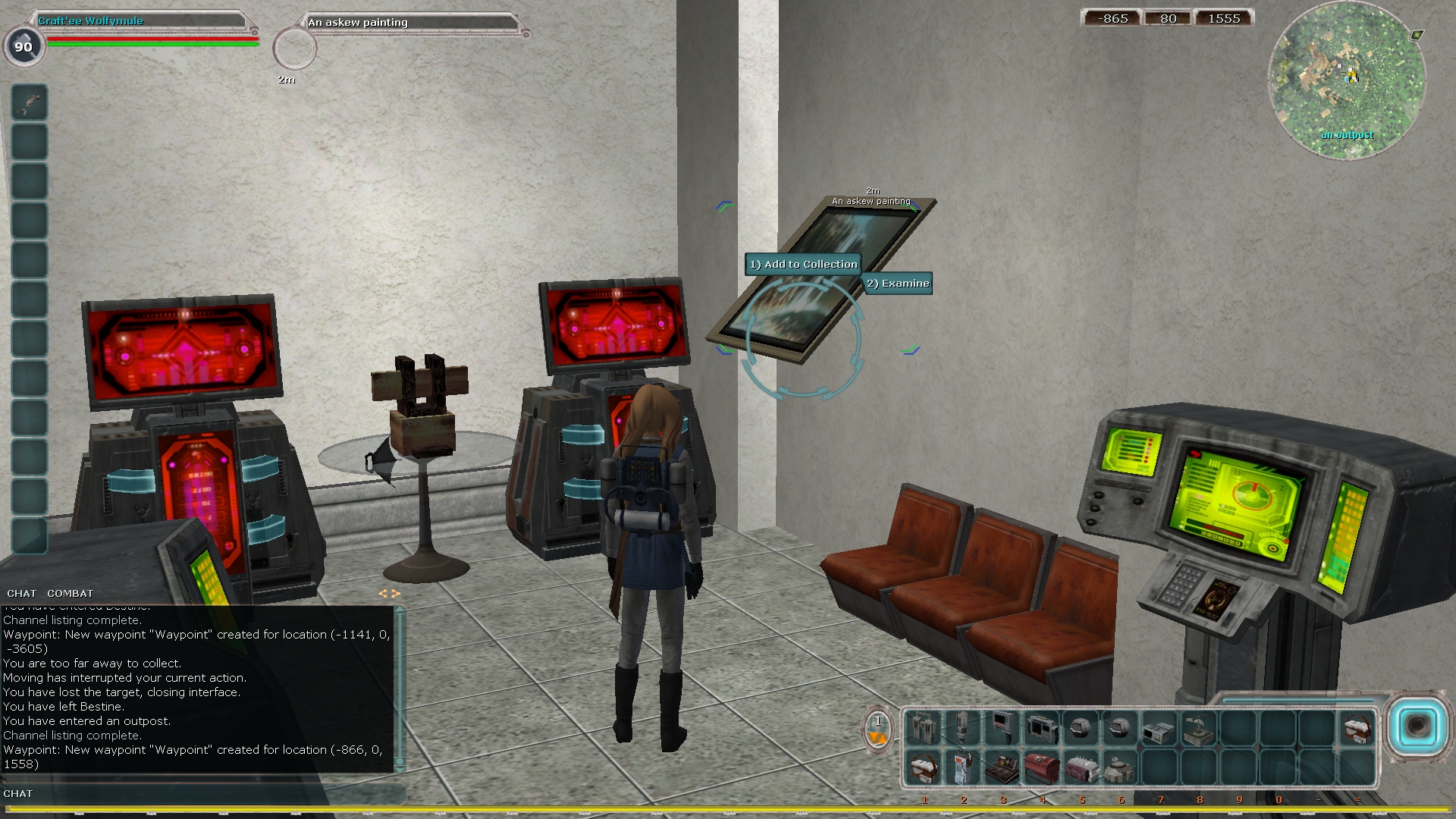 Once I dashed around on my grand tour of several cities and outposts in SWG, I decided to take a few moments and make use of my newfound skills. I figure I should start small and put together my personal house first, which means a little bit of living room decoration. The matter of crafting a few furnishings was a dawdle since I didn’t really need to worry about material quality, and the macros I wrote up and added to my hotbar made placing items and arranging them where I wanted pretty easy. It was, basically, a lot of foreplanning and forward work that ended up making my decorating life easier.

To this point, I’ve got a nice little bookshelf, a comfy lounger, and even a couple of lamps that I rotated and placed on the ceiling to create a pair of swanky-looking little chandeliers. I’m planning on seeing about putting a long planter along the wall and perhaps a fish tank nearby, though I’m pretty sure that will require some further futzing with furniture pieces, arranging them in ways that they’re probably not initially intended.

But that’s part of the fun for housing, and ultimately all of this makes me connect with my character and my place in the game that much more. I seriously can’t stress enough how nice it is to be doing MMO housing again and how much access to that kind of system makes me feel connected to a game. It’s probably fluff to most, but it’s what makes a game world a home world to me. 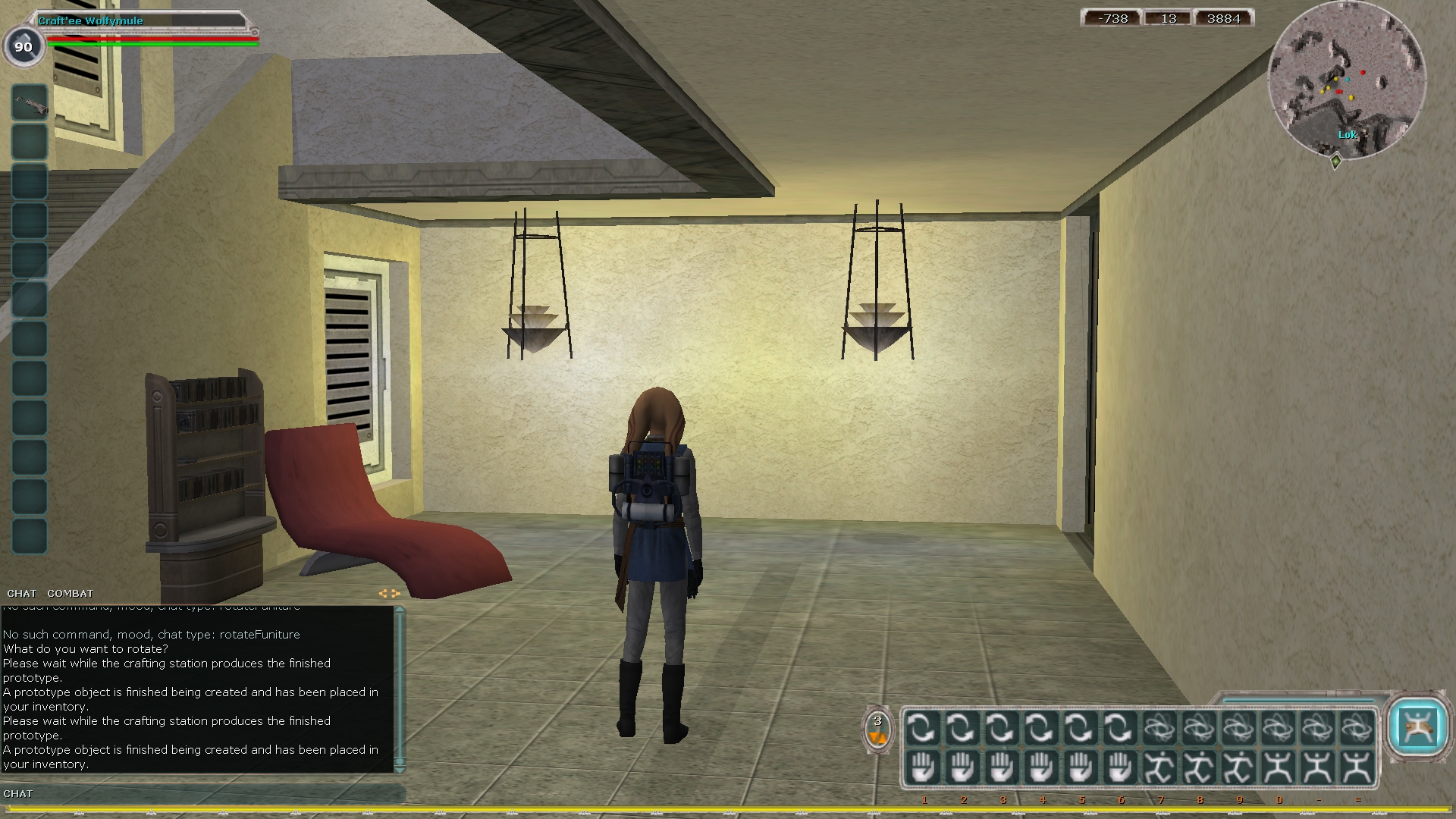 I could probably sink hours into creating furnishings, twisting and sliding them around, and arranging them into ways that are (probably) creative, but the polls said I needed to do more crafting things, and while furnishing my house kind of links in to basic crafting, it was about time to start exploring more into the crafting system. The long-tail pursuit I have is to create starship-related items, so the first job was to head to the nearest bazaar terminal and try to see what the market looks like.

A bit of rooting around the related sections of the bazaar found that there were not a whole lot of items being offered in this category, and the few that were seemed to be making a pretty nice little pile of change. As a test, I cobbled together an item to see how fast it would sell and ended up with a quick 5K after just a day on the market. I don’t want to count my chickens before they hatch here, but it would appear that I could possibly corner a market, or at the very least serve a starving one.

So now it’s a lot of research into what sort of items starpilots value. Which kind of led me towards looking for common materials to harvest. Which led me once more into the field to get into some gathering, only this time using harvesters that Bree had kindly gifted me. I first decided to go after some chemicals, which got me acclimated to using the SWGAide tool to try and track down some of the nicer sorts of that material. My digging brought me to Tatooine, and through use of my survey tool I found a location with a 90% resource yield. I eagerly whipped out my chemical harvester but was given no love as the placement grid was glowing bright red. 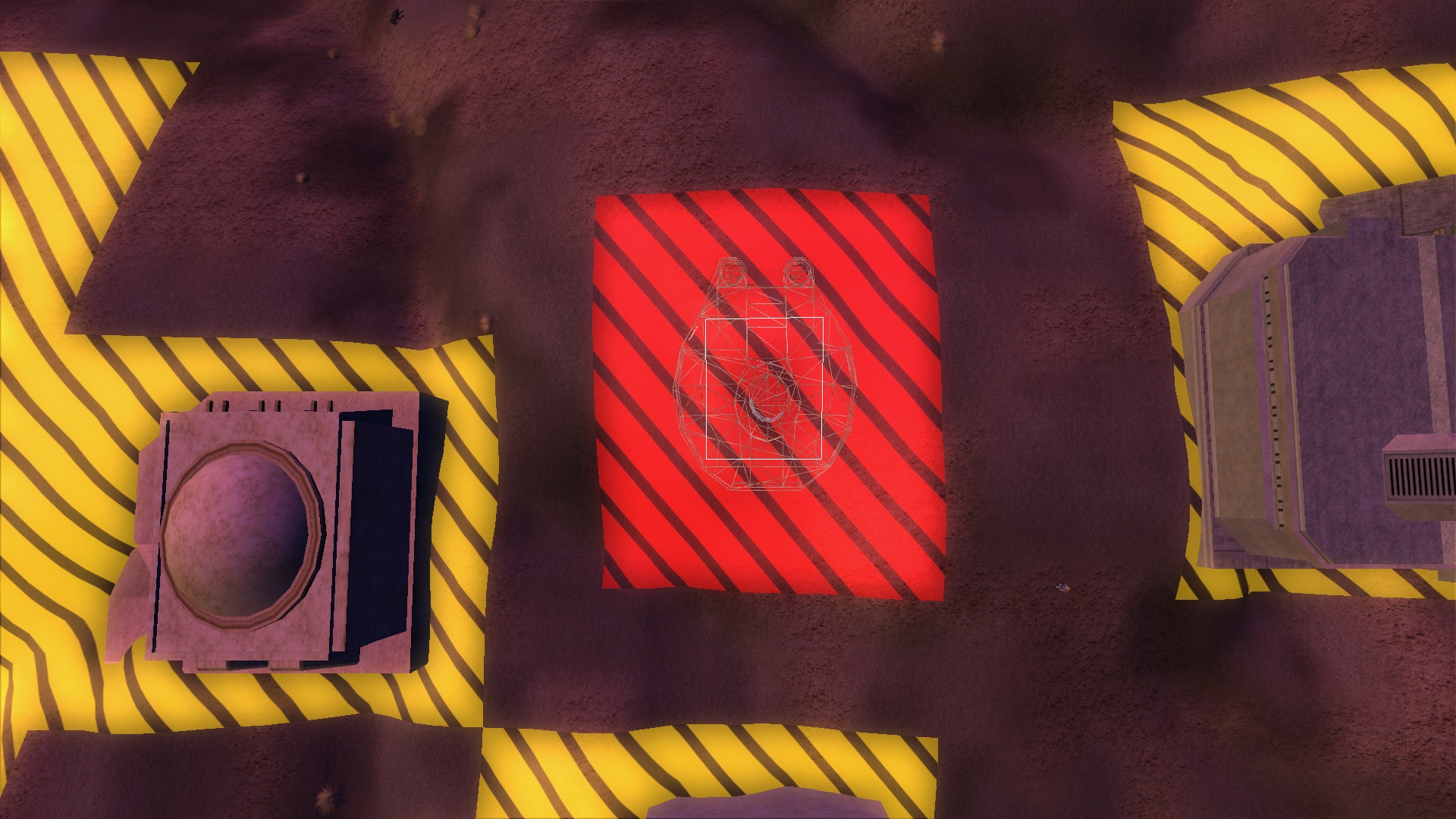 This brought me once more to Bree for another whine session (that I’m sure she just adores) and another Q&A on what I was doing wrong. Simply put, the ground was apparently too bumpy for my harvester. Another little contrivance to add to the pile, then, on top of the fact that resource maps are constantly moving around every spawn, though on that latter point Bree did talk me down from my frustration by explaining that the RNG-based material movement keeps things from being monopolized by veterans. Which I get, but it still meant I was stuck hand sampling for a bit.

The next day, Bree alerted me to a juicy aluminum location, which Aide illustrates is a useful material for crafting starship engines and boosters. On top of that, this resource was on much flatter ground. Additionally, she taught me the ways of god harvester placement; planting on the 90% yield spot isn’t necessarily the only answer, since these things slurp up gobs of material. To that end, I went to the location she had discovered, successfully plopped down my harvester, powered it and paid its rent, and now I’m slowly raking in huge piles of goodies. I now understand just how Bree got the masses of materials she handed over for me to build my own things.

These are all first steps into the grander plan, and it all is starting to gel together in my head. I’ll soon be working on planting my own factories, setting up schematics for items, and kicking out factory runs of parts. And as hands-off as much of this still feels thanks to automation of things like factories and harvesters, I’m still eager to push forward in putting together my in-game business. Once again, I’m starting to feel like I have a place in the SWG Legends world. It’s just one harvester. It’s just a couple of sold items. It’s just four pieces of furniture. But to me, they’re me digging into the earth of the game’s world and establishing roots. 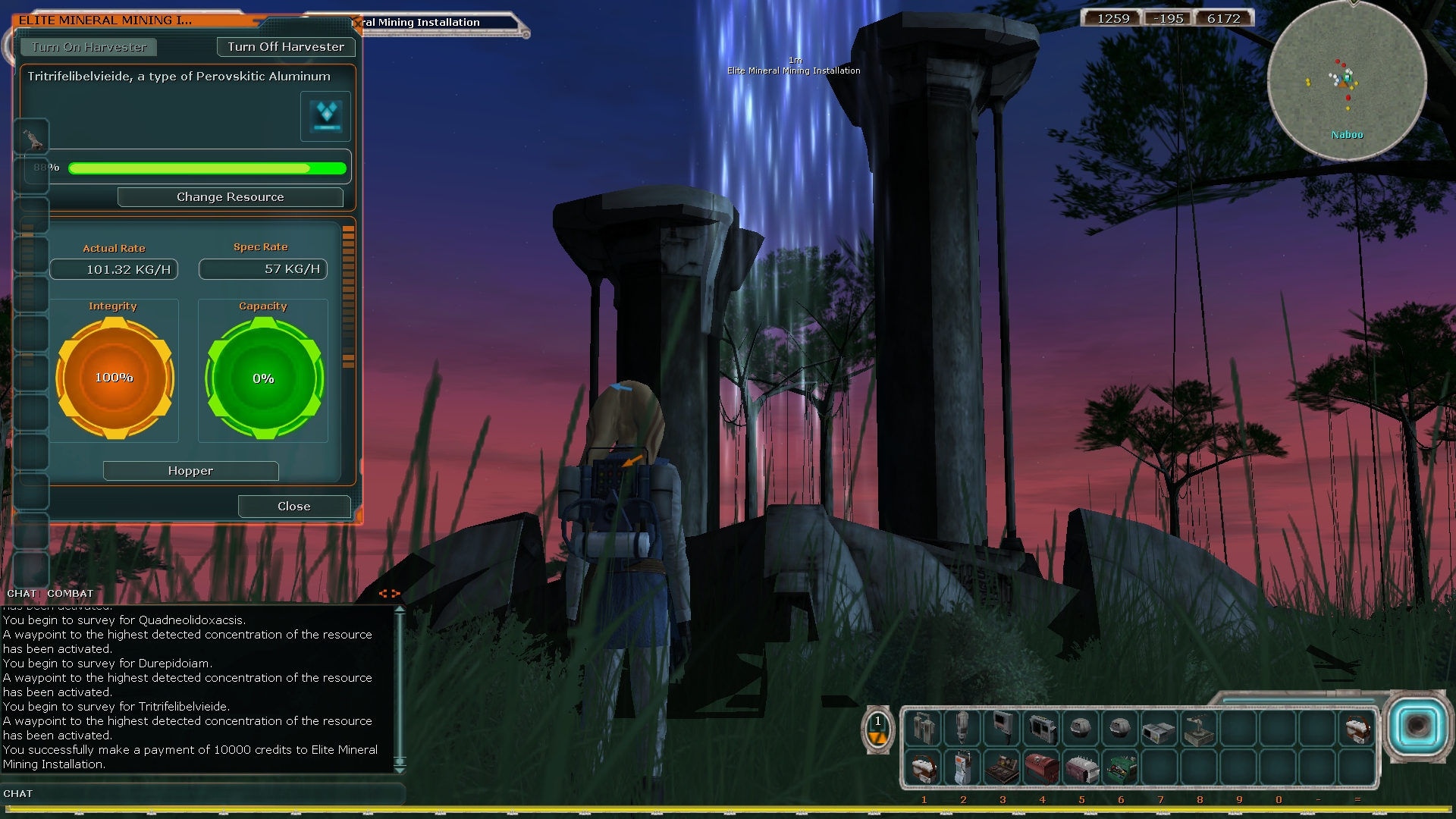 So now let’s talk about polls for a moment. This last week’s poll was running at a 50/50 split between more crafting and starship things in SWG for so long that I feel like it’d be a disservice if I ignored those calls to write about those experiences, so that’s what I’ll be doing for next week. Yes, I did write before that my time in this game is winding down, but I think I can get one more week out of this thing. Especially since I’m enjoying myself!

As for the next month’s game, that one did end up in a tie between Wakfu and PlanetSide 2. After some consultation with a friend who plays a lot of PS2, I get the impression that there’s barely a paragraph that can come out of that game, let alone an entire column, so I’ll be putting that choice on the back burner for now and instead focus on Wakfu. That said, I still might bring PS2 back up to the fore if things in Wakfu kind of hit a wall. Until then, it’s time to choose my first class in Wakfu.

What class in Wakfu should I start off with? 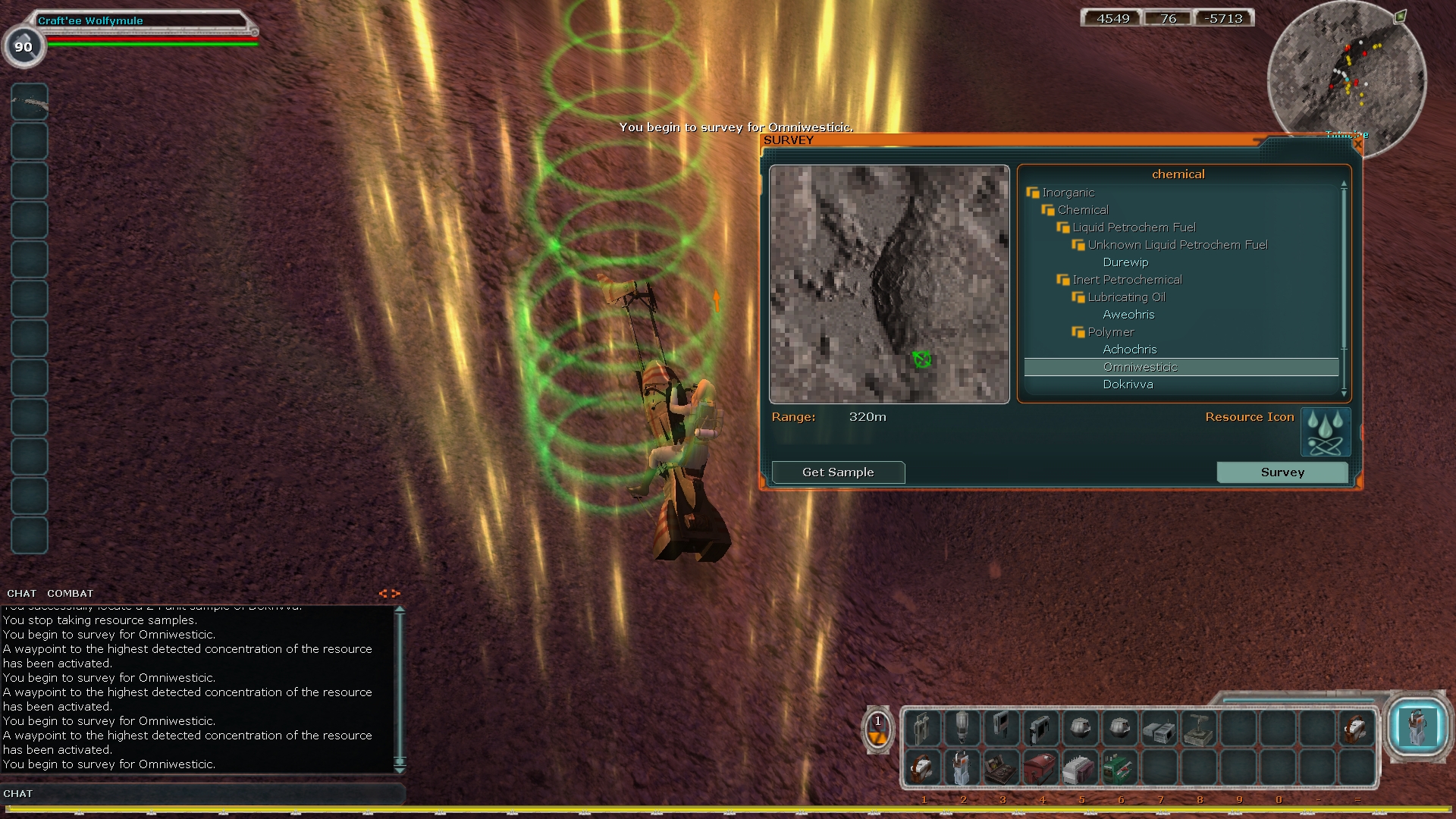 As ever, polling will wrap up at 1:00 p.m. EDT this coming Friday, July 2nd. Until then, I have a harvester to coddle, a market to sniff at, and furniture to place. In short, I’m pretty sure I’ll keep busy.

Enutrof is probably the most interesting class in the game.

Travesty that the month series is over and you didn’t once touch space. Then I read you will continue! feel liked you would’ve like space. And if not, would be super interested to know why not.

Careful, Chris, you keep coming to Bree for crafting counsel she’s gonna create a coup, take over and do the crafting for herself!

“Ken, you’re taking too long. Just go to your room and I’ll make it.”

Whoa! Where did that flashback come from?! 😱🤣🤣🤣