The day is finally here: We’re getting our first look at Cantha Cantha Cantha! Yes, Guild Wars 2 is taking the wraps off its long-awaited third expansion, End of Dragons. We’re crossing our fingers for some launch details (as the expansion was delayed from 2021 to 2022 already), plus ArenaNet has promised “expansion features, a new trailer, details on the story and setting, elite specialization beta information, interviews with the development team.” And of course, we’re eager to hear from the team – and the new team leads, including a returning Colin Johanson – directly.

END_OF_DOCUMENT_TOKEN_TO_BE_REPLACED
The official kickoff for the stream is at noon EDT on Twitch and YouTube, a few minutes after this post goes live. We’ll be following along and updating this post with the big reveals as they come! • Colin Johanson and Andrew Gray are up and talking about how it’s been 15 years since since Guild Wars 1’s Factions. 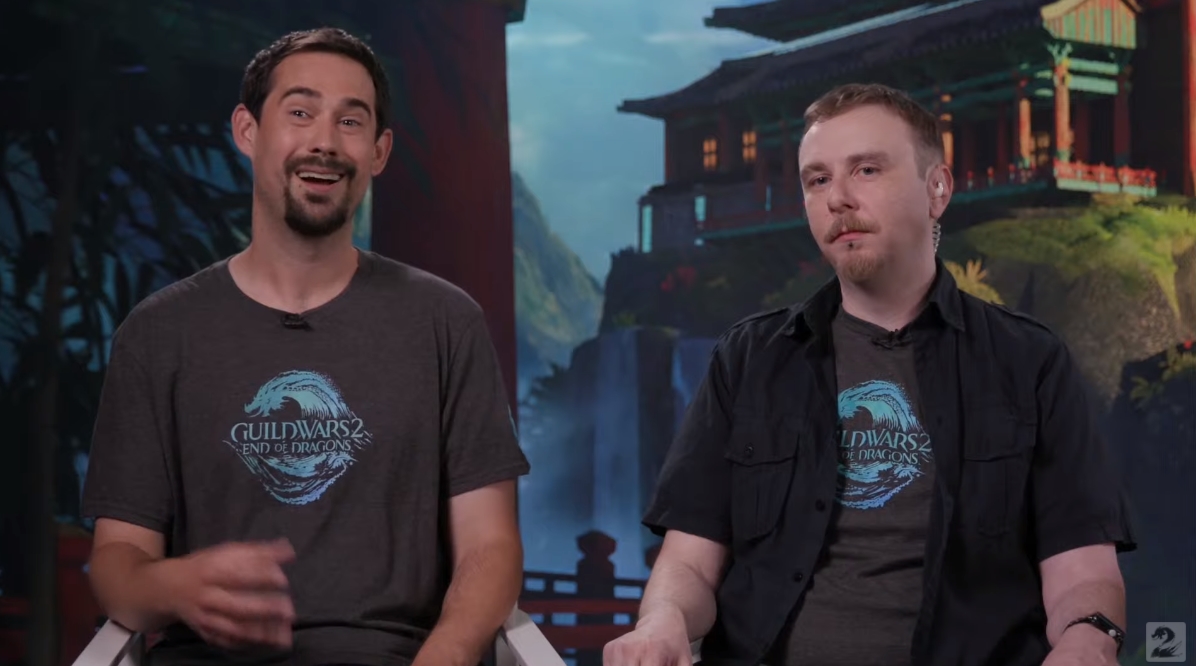 • Yes, “Cantha when” has been a thing for so many years now.
• Kicking things off with the trailer!

• Devs noting that the last storyline in Cantha came during Classic Guild Wars 1’s Winds of Change, but the continent hasn’t remain locked in time – it has progressed affected by the major upheavel players have seen too.
• Allies are back – Marjory and Kasmeer are back. Yes, Jory the Detective will be a big deal again. Aurene figures prominently as well.
• Highlighting different maps – Echovald looks gorgeous. Oh yes, my friends, verticality is here to stay. Shing Jea is topographical different, but still familiar. They’re trying to make everything usable long-term and mount-explorable.
• Siege Turtles! Pew pew. Yep, they’re back as a multiplayer co-op mount, so you can pick up your dudes and drive around, though passengers can do stuff too. And they point that the Cantha tech has evolved a bit. 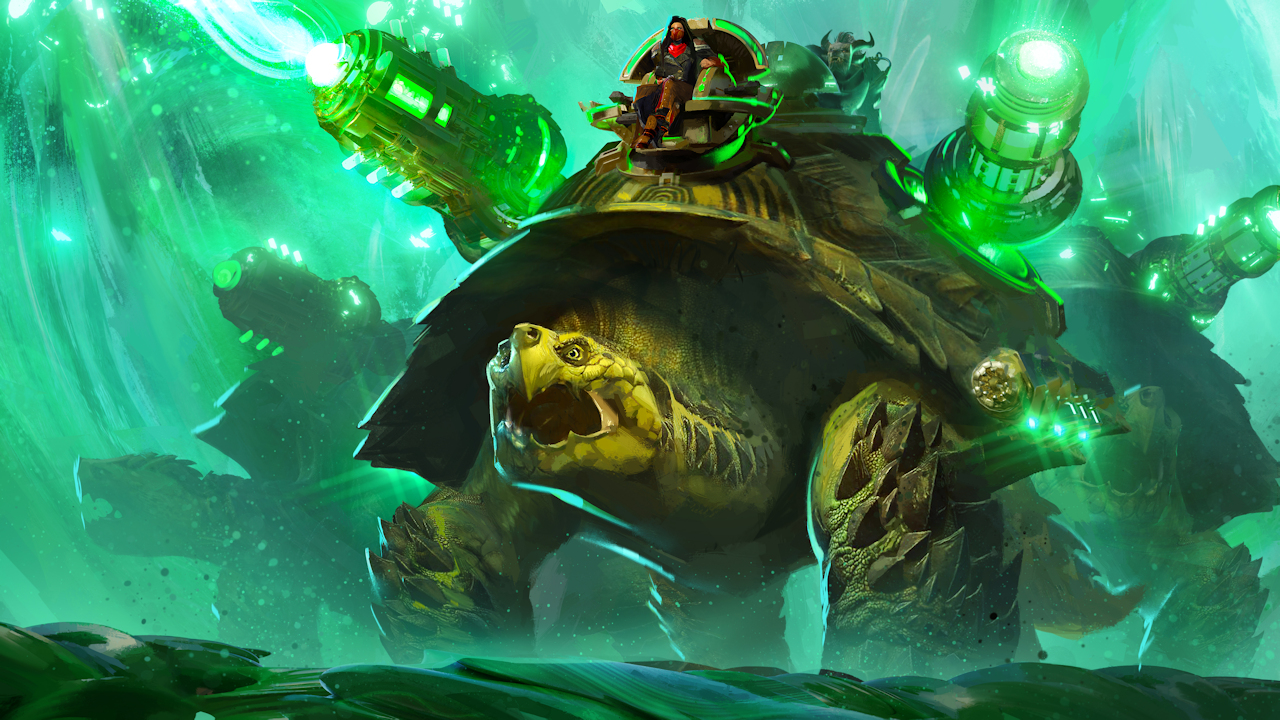 • Fishing is coming! It’s one of five new mastery tracks, along with turtles and skiffs. The other two are apparently not being revealed today. Yes, you can fish in every zone in the game, not just Cantha.
• Oh yeah, skiffs are also a thing! They didn’t dwell on this.
• Sixteen new Aurene-inspired legendary weapons will launch with the expansion. Precursors are baby Aurene; Legendaries are adult.
• Strike missions are changing things up with challenge modes available shortly after launch. Associated rewards are getting a simplification/standardization pass across the game.
• There’s a new guild hall, this one in Shing Jea. It’s stunning, with gobs of water for fishing. The expedition for this hall is better-scaled and is achievable for smaller teams.
• Elite specs are Cantha-inspired of course and Anet says it’s “broken a lot of its rules.” The one they’re showing today is for the Mesmer – it’s a Virtuoso with a dagger. It’s not exactly a bard, but it does use bladesong mechanics in lieu of clones, so kinda! Anet says it thinks the Virtuoso plays like a different class. They’re going to hold off on the other class specs for now. 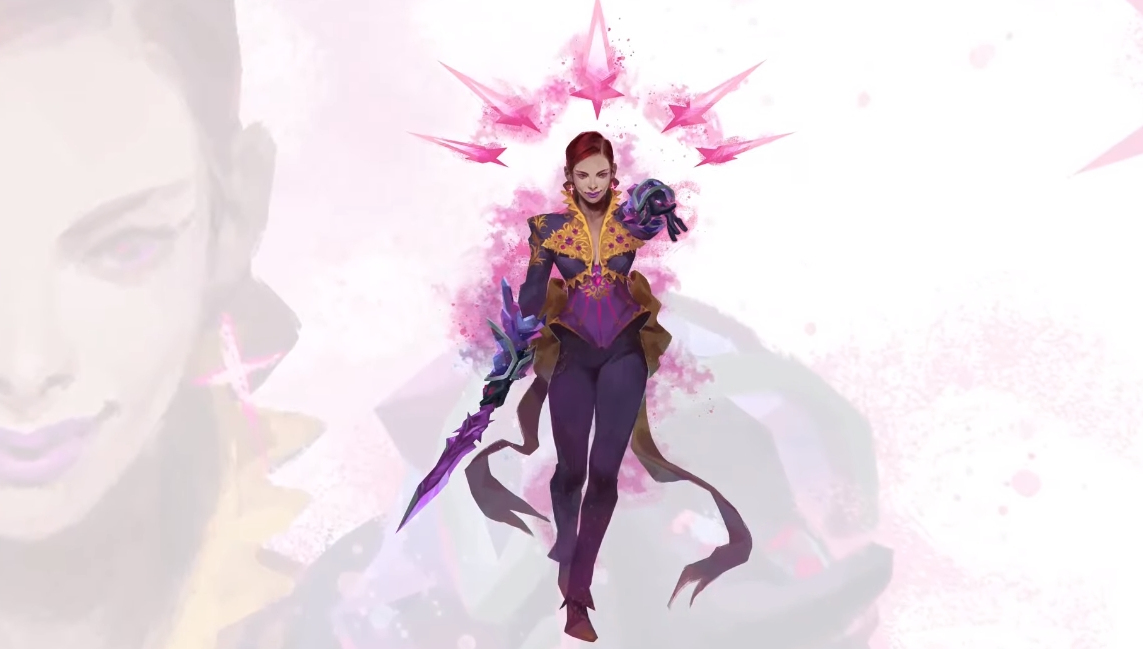 • Colin Johanson stresses that End of Dragons is not the end of the game. It’s just the next big step for the franchise.
• The team is upgrading the game to DX11. Expect beta for this later this year. More info in August. 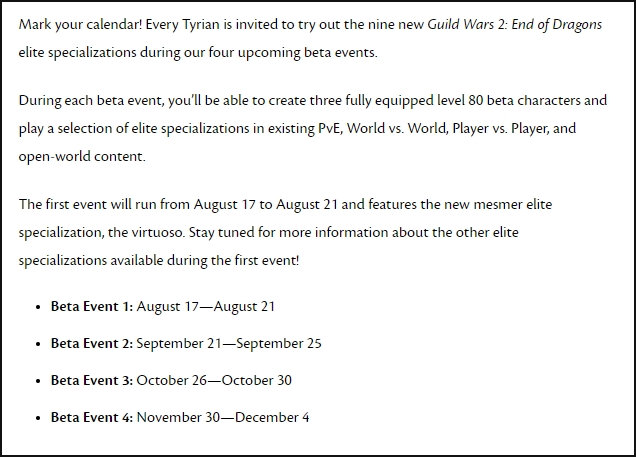 • There will also be four beta events for the elite specs, open even to F2P accounts. The first one starts August 17th, with the Virtuoso and two more. They tease one of them: 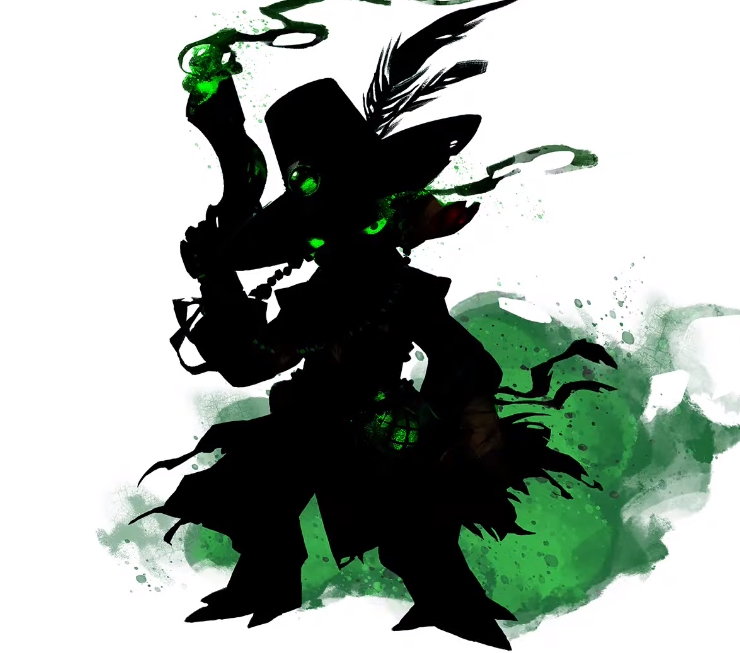 • Couple of promos here for a gaming chair and Aurene statue.
• End of Dragons launches in February 2022 with prepurchases open later today. We’ll include the preorder info shortly.
• Quick tease for “new looks” for characters too.

Guild Wars 2: End of Dragons Whisks Players Away to Mysterious Land of Cantha With New Expansion in February 2022 on Windows PC

BELLEVUE, WA – July 27, 2021 – Today ArenaNet and NCSOFT provided the first look at Guild Wars 2®: End of Dragons, the third expansion for the award-winning and critically acclaimed MMORPG Guild Wars 2. Featuring a host of new gameplay features and epic adventures set in the lost land of Cantha, End of Dragons will enrich the vast, subscription-free online world of one of the most enduring and beloved PC games of all time.

The new Guild Wars 2: End of Dragons™ trailer can be viewed HERE, while further screenshots and concept images can be found at the online press kit.

End of Dragons™ will feature an all-new story set in the mysterious island realm of Cantha, a multi-ethnic land of magic that is home to the oldest nation of humans in all of Tyria. First seen in 2006’s Guild Wars Factions, this lush region dotted by islands and exotic architecture has been closed off and isolated from the rest of the world for over 200 years in the aftermath of The Jade Wind, a magical curse that petrified everything it touched and devastated the southeastern coastal regions. Canthan innovators have long sought practical applications for the material now known as “dragonjade,” achieving solutions undreamed of elsewhere in the world thanks to this vast store of magical energy. But the dragon cycle that has sustained and blighted Tyria for ages is collapsing…

“We’re incredibly excited to bring players back to the realm of Cantha for the first time in 15 years,” said Colin Johansen, studio director. “End of Dragons represents the realization of the entire development team’s passion for Guild Wars 2, and our continued commitment to creating quality content for players old and new.”

Players will take their first steps in rediscovering this hidden land when End of Dragons launches in February 2022. A roster of new voice talent, including Erika Ishii, Noshir Dalal, Ry Chase, Rina Hoshino, Tina Huang, and Sarah Sokolovic will serve as guides, allies, and foils on a new adventure that promises to reveal some of the Guild Wars franchise’s oldest canonical secrets.

End of Dragons will introduce a wealth of new features, activities, and storylines to the game, including the triumphant debut of the game’s first multiplayer mount, the Siege Turtle. Capable of hosting two riders, this walking war machine will bring co-op gameplay to Guild Wars 2’s renowned and acclaimed selection of game-changing mounted beasts.

New personal watercraft called Skiffs will serve as a mobile ferry for friends and guildmates, and for the first time fishing arrives in Guild Wars 2, providing a new way to interact with the fauna of Tyria, be it catching up some dinner or taking part in tournament events for new anglers.

On top of a new set of Masteries, a new suite of third generation Legendary Weapons inspired by the iconic Elder Dragon Aurene will be available for players to seek out at launch, offering the ultimate heroic character reward, while new Strike Missions provide challenging encounters to tackle with a squad of 10 players. For the first time, challenge modes for each of the new Strikes will be enabled shortly after End of Dragons launches, which will put even the most battle-hardened groups to the test.

Additionally, to commemorate the launch of End of Dragons, ArenaNet is making available a special edition premium statue of the Elder Dragon Aurene, the player character’s stalwart in-game companion. Sized at 8-by-10 inches, this translucent crystalline sculpt of Aurene in her regal Eye of the North pose will be available for pre-order from the Guild Wars 2 web site between July 27 and August 20 for $120 plus tax and shipping. She will also come with a digital redemption for a unique in-game character cape with her logo emblazoned upon it.

ArenaNet and NCSOFT will reveal more about the expansion throughout the summer on their Twitch and YouTube channels via a series of Friday live streams, with many more surprises in store throughout the remainder of 2021.

The preorders are live now too! 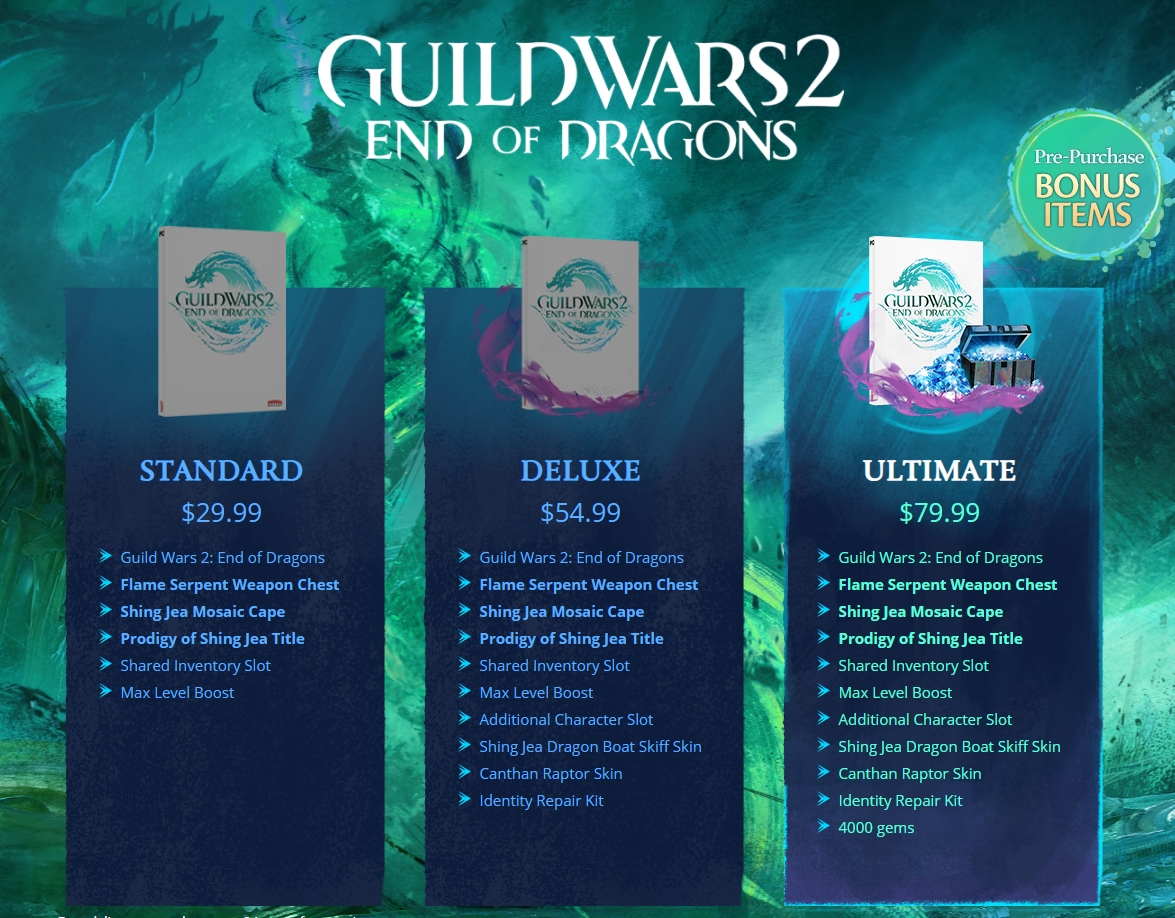 There also appears to be a collection bundle if you need the earlier expansion set too. 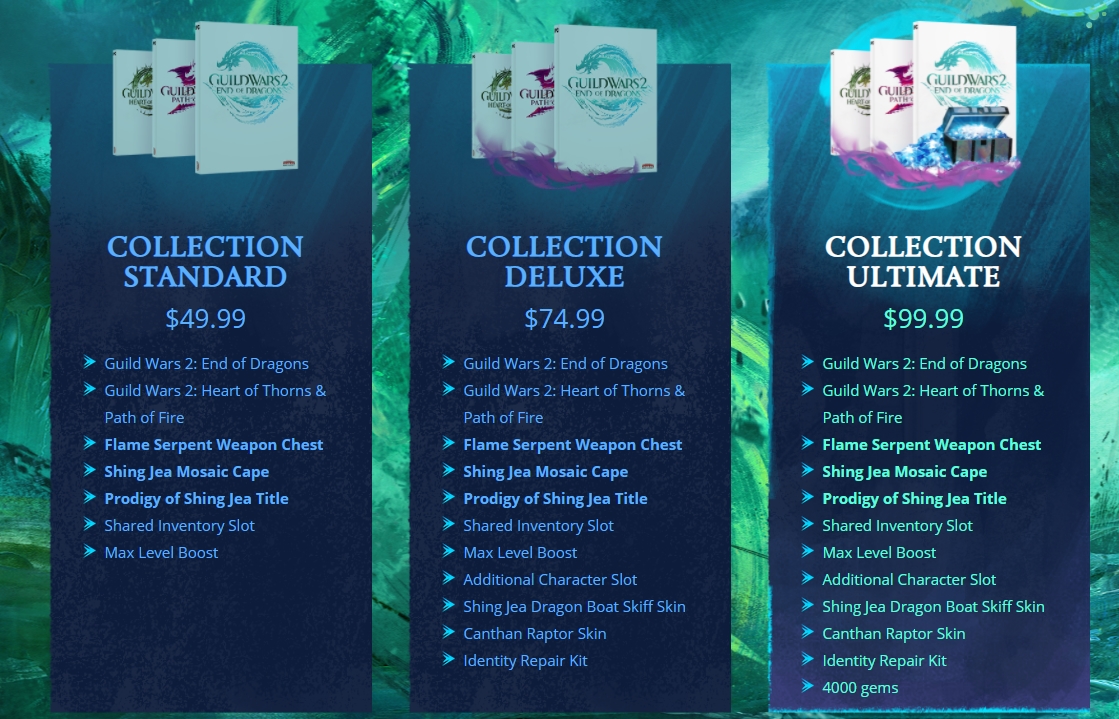 Thank you #GuildWars2 community for joining us for today's livestream! Guild Wars 2: End of Dragons is available for prepurchase now–get bonus items and begin the journey to Cantha: https://t.co/ZwBIxeMcC8 pic.twitter.com/UtoNlYlFwb

The Daily Grind: What was the most important innovation in MMOs...

The Stream Team: Grouping up for more Zariman missions in Warframe