Homestead who? Dungeons what? Player-made items? Don’t need ‘em. The pinnacle of player creativity in Trove, without any peer or equal, is the Club World excursions I’ve been on. Seriously, the things people are making are insane.

END_OF_DOCUMENT_TOKEN_TO_BE_REPLACED
The fact that these things are a thing that isn’t lauded openly and brazenly on the game’s loading page is, frankly, an embarrassment. The only reason I knew about these things is because Bree told me, and the only reason I was able to visit the places I did was because of a big giant list of Club Worlds that were collected and handed over to me. Unless there is some sort of obvious in-game UI element I’m missing, it really is a shame that this feature isn’t more obvious or prominent.

But hey, the game would rather slap you with a calendar of events and store sales information when you boot it up first instead. I get it. You have a business to run. 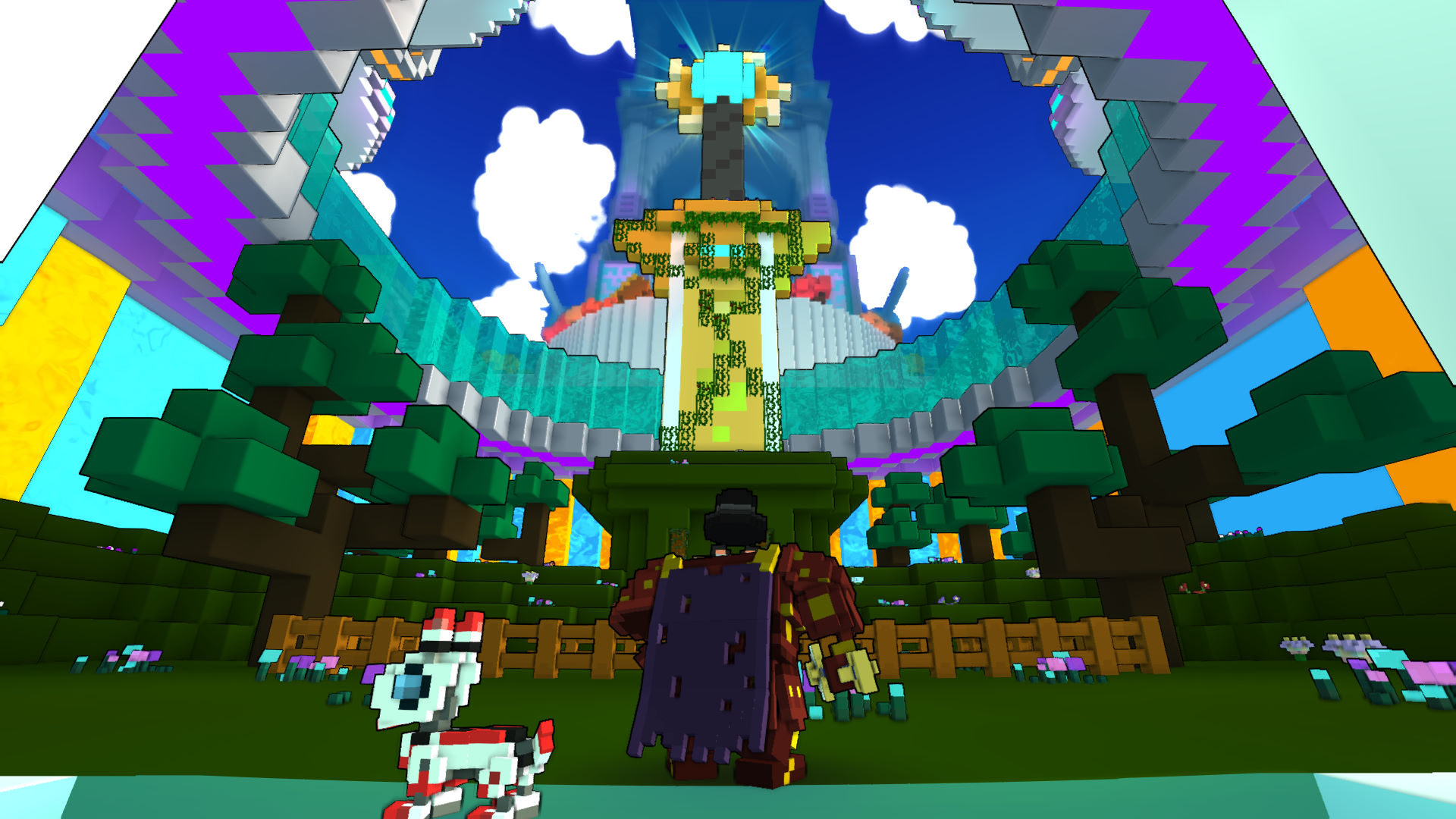 Back to the delightful topic at hand, these locations couldn’t be simpler to visit once you know what to do. I simply typed in a slash command followed by the world’s name and I immediately ported over. Bree had pointed out that this sort of thing was the game’s true endgame, but even that didn’t prepare me for the scope of what people have been putting together in this game.

When they’re called “worlds,” that really isn’t a boast in the case of nearly everywhere I visited. Most of these locations were built from the ground up to feel like entirely unique and distinct dimensions much like… well, like the housing system in RIFT or even in WildStar, though I think the scales that Trove players are working in are far, far grander. I’ve visited a world that had multiple biomes and what looked like continents. There were massive palaces. Escape islands. Huge headquarters. Sprawling villages or cities. This stuff is astonishing.

Yes, the heavy, boxy voxels that Trove works in means you’re kind of walking through pixel art under a microscope, but then on the other hand there are genuinely brilliant pixel artists out there. The houses, palaces, castles, arenas, and other things of whimsy like floating islands, giant teapots pouring water on an island, or dragons or airships hanging in the sky, were truly majestic. 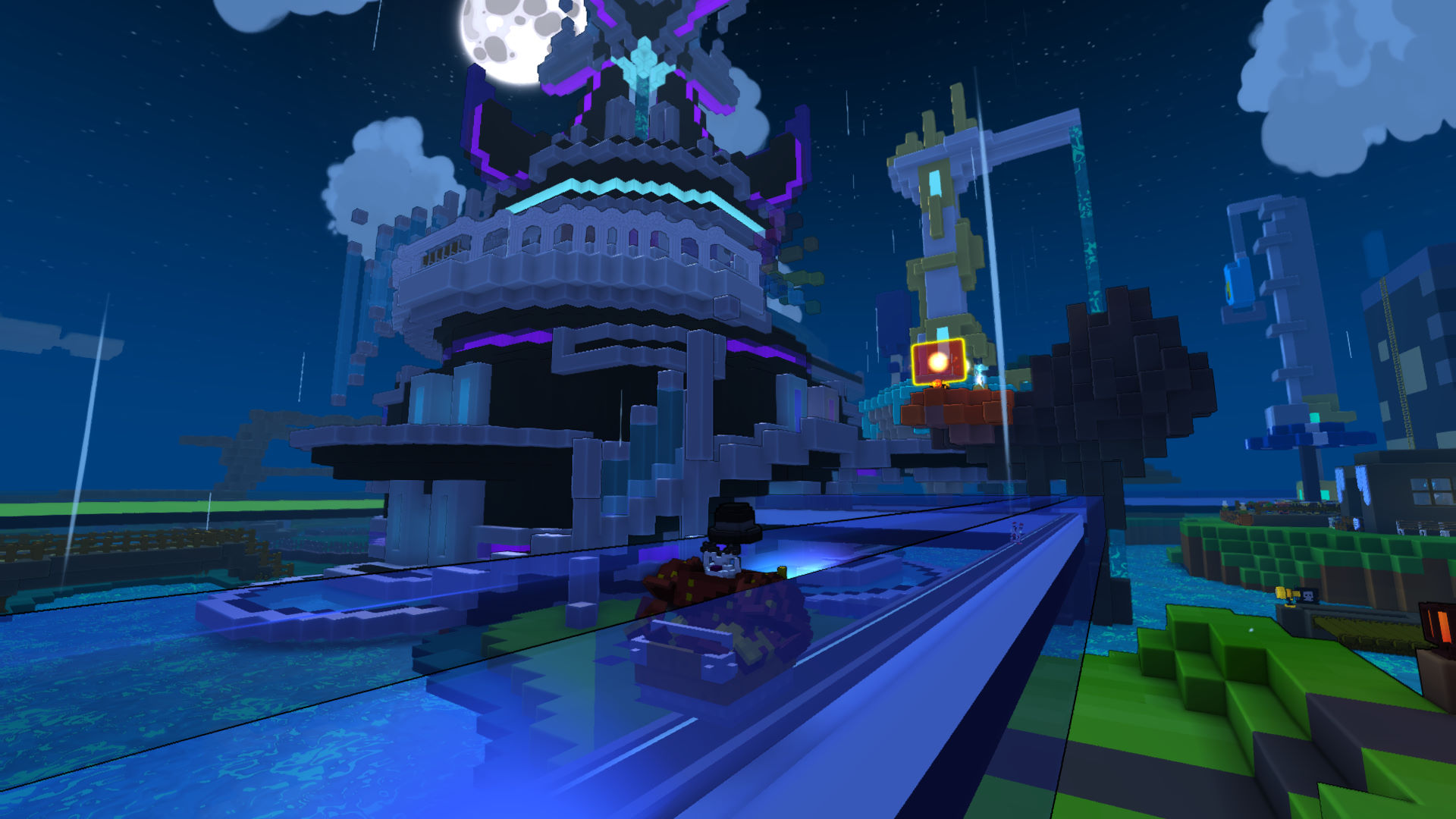 The little details weren’t forgotten by a lot of people, either. In at least a couple of Worlds that I visited, people had built elaborate Maglev tracks to help travel from location to location. People are playing SimCity in Trove – that’s how well designed and well laid-out these things are. More than a few of them had a whole overarching theme, and at least a couple felt like they were lived-in or had a visual story to tell. Even those that were a bit more utilitarian in where they place things like crafting tables or storage chests had a level of care to them.

And that’s not taking into account the fact that people are using music blocks and Maglev tracks to craft entire songs. There were a couple of Worlds that had areas where whole songs could be played when you hopped into your little minecart. And these weren’t just basic MIDI songs either; they were carefully built and arranged to include depth of sound, full ranges of instruments, and harmonies where appropriate. I never thought I would find a game where I could hop into a minecart and ride it to listen to songs like Feel Good Inc., The House of the Rising Sun, or To Zanarkand from FFX, but here we are. 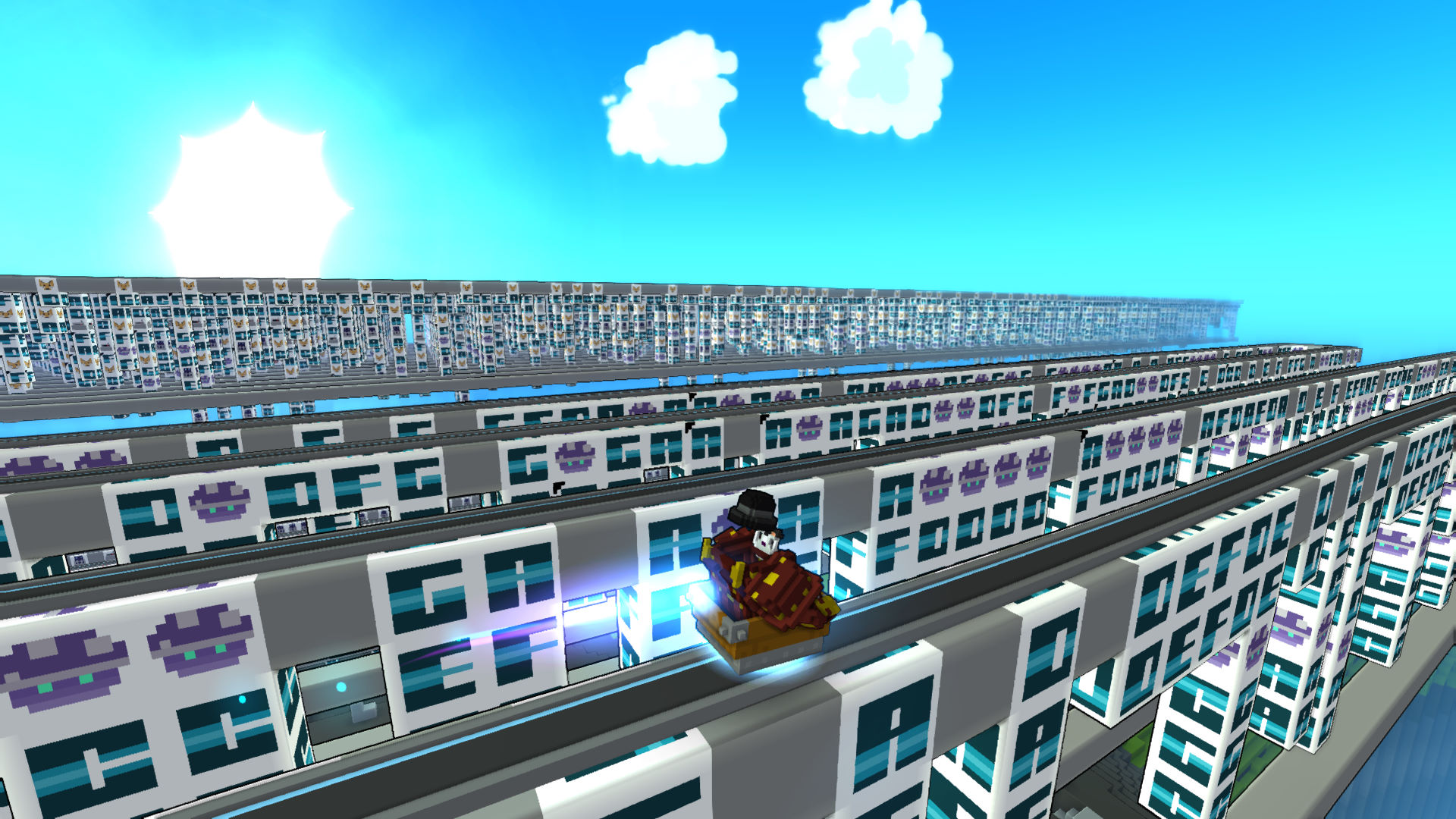 None of these Worlds is going to come close to the exploration of locations that I enjoyed when Landmark was a thing. None of these will have that level of visual fidelity owing to their chunky blocks instead of smoothed voxels. None of them are going to feel as approachable as building and designing in that game did. But that all said, it’s hard to deny how very happy Club Worlds in Trove made me, with that same distinct, unique, and previously untapped form of joy that exploration in Landmark gave – a sense of genuine awe and discovery, particularly since these are things that other players made.

Who needs a homestead? Who would want a square parcel of land when you could, apparently, build an entire universe? Assuming, of course, you have the likely obscene amount of time devoted to make it happen. But even if you don’t, visiting these worlds is just about as good. Bless player creativity. More games need to do this. 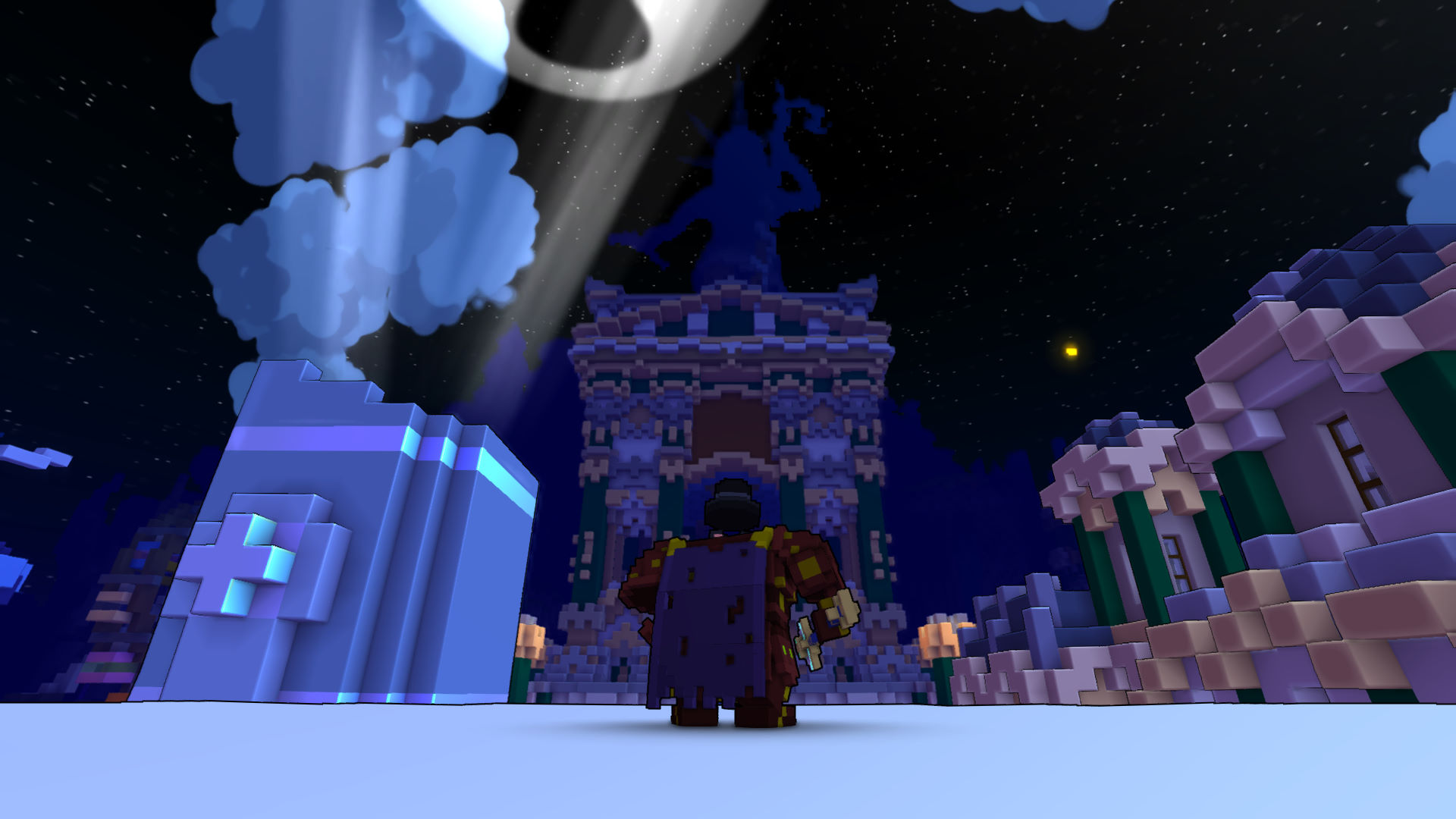 So as I promised, we’re going to be hopping into DC Universe Online for next month, and that means character creation questions to answer. So here are this week’s two poll choices.

Should I become a hero or a villain in DCUO?

What powerset should I use? 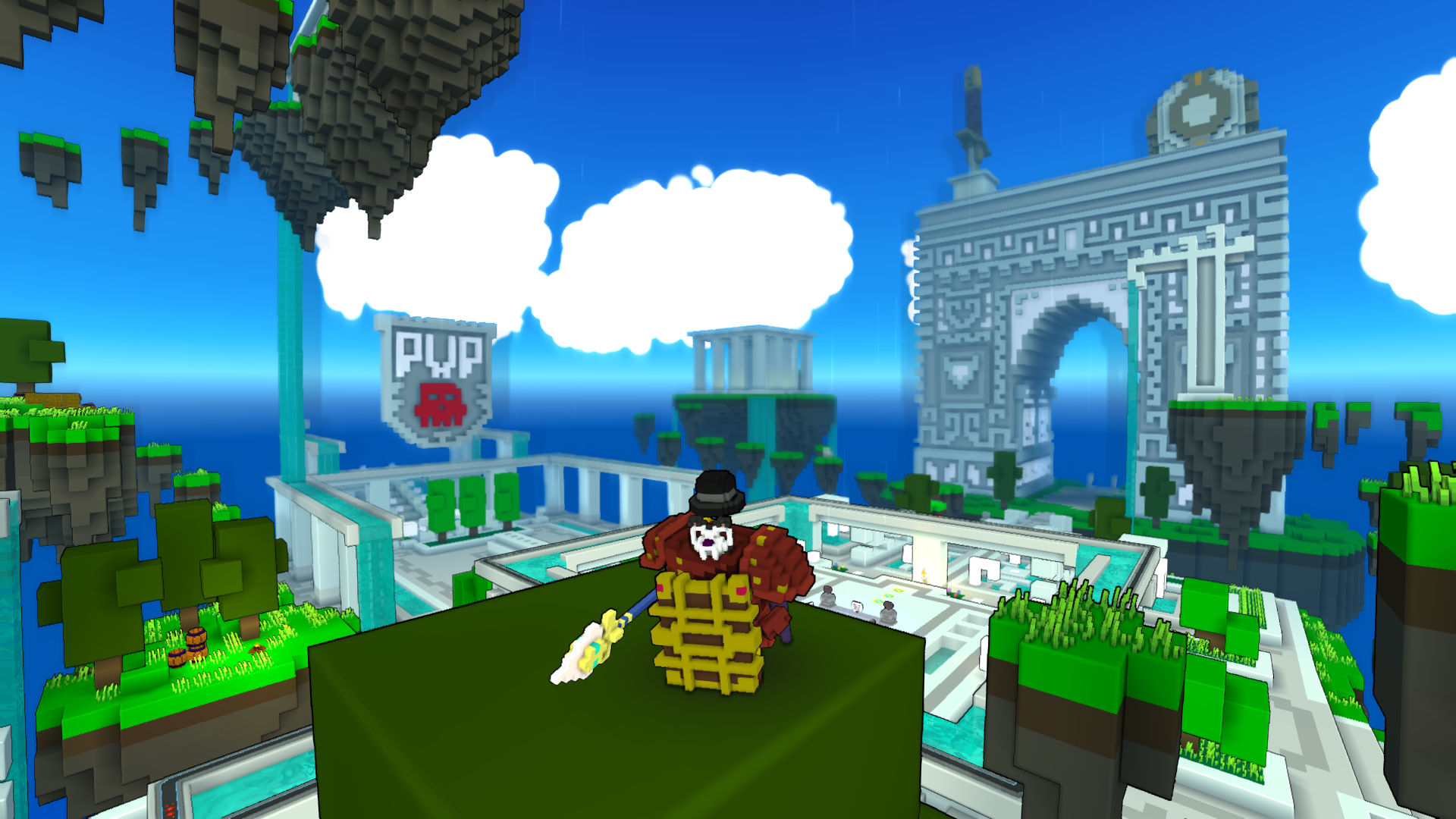 As ever, polling is going to wrap up at 1:00 p.m. EDT on Friday, September 3rd. In the meantime, I think I’ll get a few more levels on this Revenant. I don’t know that I’m hooked on Trove, but I can’t bring myself to be completely rid of it, especially since it provides so many unique gameplay experiences.