After more than 20 levels’ worth of time in New World, you’d think I’d have a pretty good handle on why this game has me enthralled, but the more I examine the game at a mechanical level, the more I’m confused about why I’m enjoying myself.

Let’s get right down to it: New World, from a gameplay standpoint, is absolutely one of the safest MMOs going. Amazon Games’ documented penchant for chasing trends and copying what already works is definitely on display here. Questing is themepark hub-based, a lot of the weapon tree choices and skill point allotment is very reminiscent of Elder Scrolls Online, and combat has some shades of TERA in terms of its active model and animation feel.

I can also pick out where the PvE parts of the game are sitting on top of the original PvP design. It’s prevalent in the server size. The animation lock of attacking feels very much geared towards people fighting one another. And the storyline, such as it is, doesn’t exactly grip me – I couldn’t even begin to tell you the name of any of the NPCs I’ve run into. 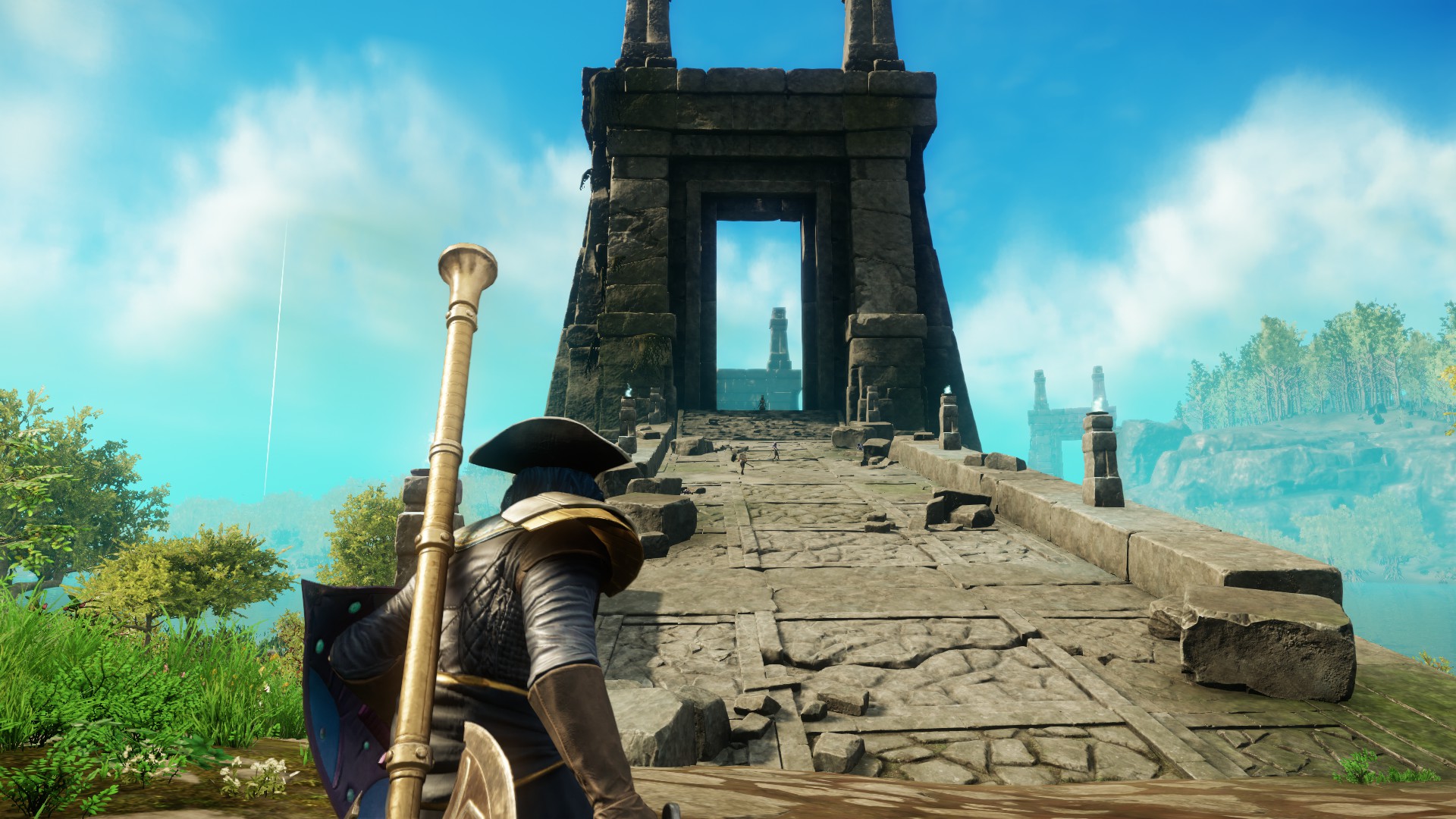 But even knowing and recognizing all of that, I don’t think New World is a bad game. It doesn’t make me clever that I can see the bolts of the design shift, nor does it make the devs of the game bad at their job. In fact, the integration of PvE into the game, while not seamless, is not nearly as tacked-on and sloppy as most would have you believe. It might seem a little bit inelegant, but there was a lot more effort put into making this game fit PvE and PvP together. Incidentally, the systems the game does copy are applied here with more craft and detail than one might expect. It’s easy to assume the tonal shift would have been done haphazardly, but it’s not. New World doesn’t feel rushed out of the door. It feels crafted together.

Before I continue, I should point out that I can’t speak to how New World feels in PvP. Someone more skilled in that arena than I will likely offer those impressions. Speaking as a pure PvE player, I’d say New World hits safe but comfortable switches for me, managing to keep itself above a copy-paste job that still keeps me engaged despite some otherwise middling story beats and questing. 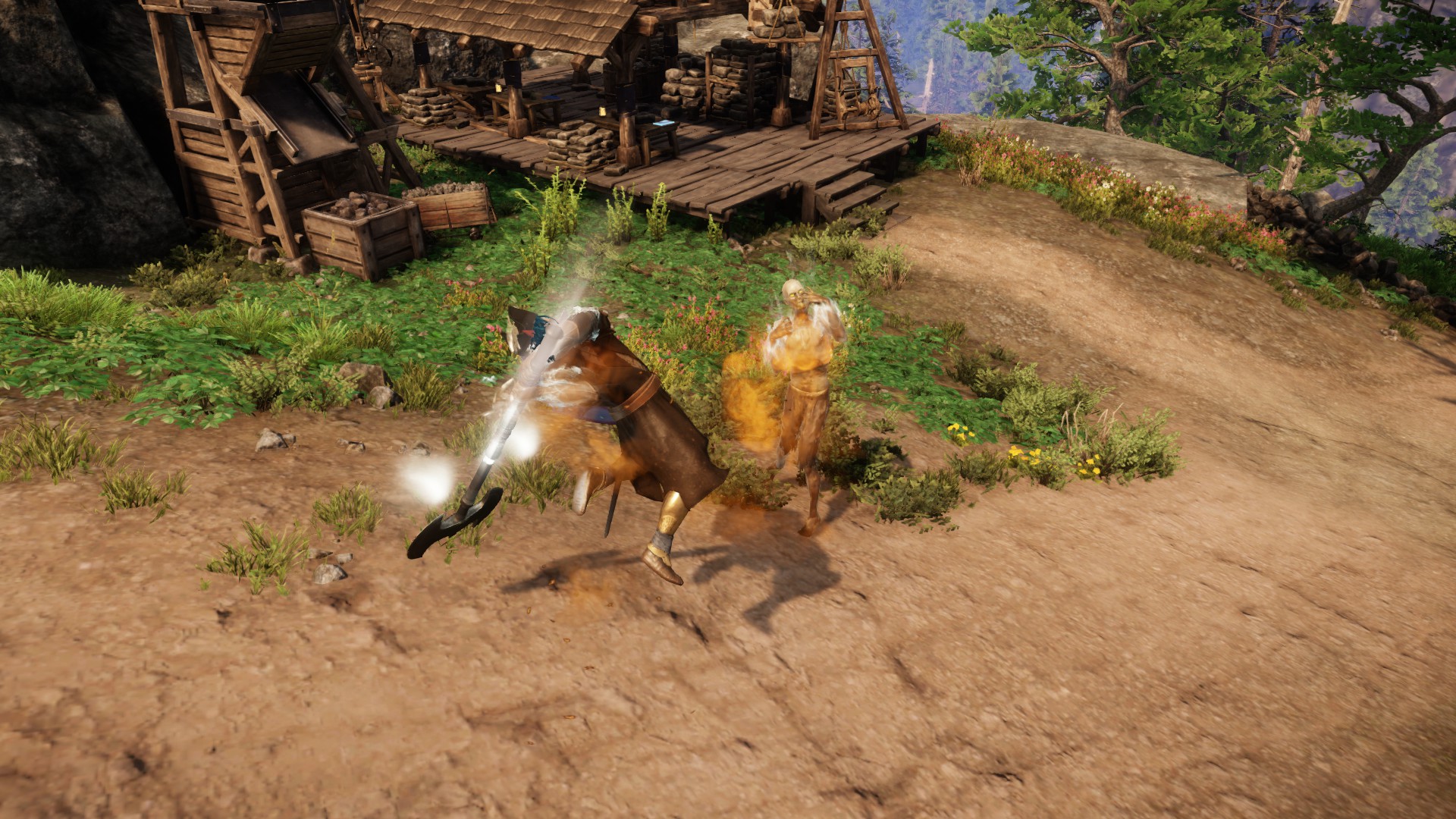 A lot of the heavy lifting is done by combat, which hits a slower, more measured, and deliberate pace than mouselook action combat would have one assume. There’s left-clicking, long presses of the LMB, right clicking for blocking, and three skills that are engaged. That’s it. It’s extremely limited, but it also means that timing attacks, blocks, and skill use at the right moments is more crucial.

This does mean that your chosen weapons (and by extension your built class) does show its hand early, but the weapon tree advancement unlocks still make me feel like I’m growing in power. And sure, you could spam LMB like a mindless goon (and some weapon trees kind of encourage this a bit), but by and large I’ve found fighting to be better when you abide by its speed limit. In fact, I’ve survived fights against multiple mobs that were four levels above me when I carefully chose when to strike. 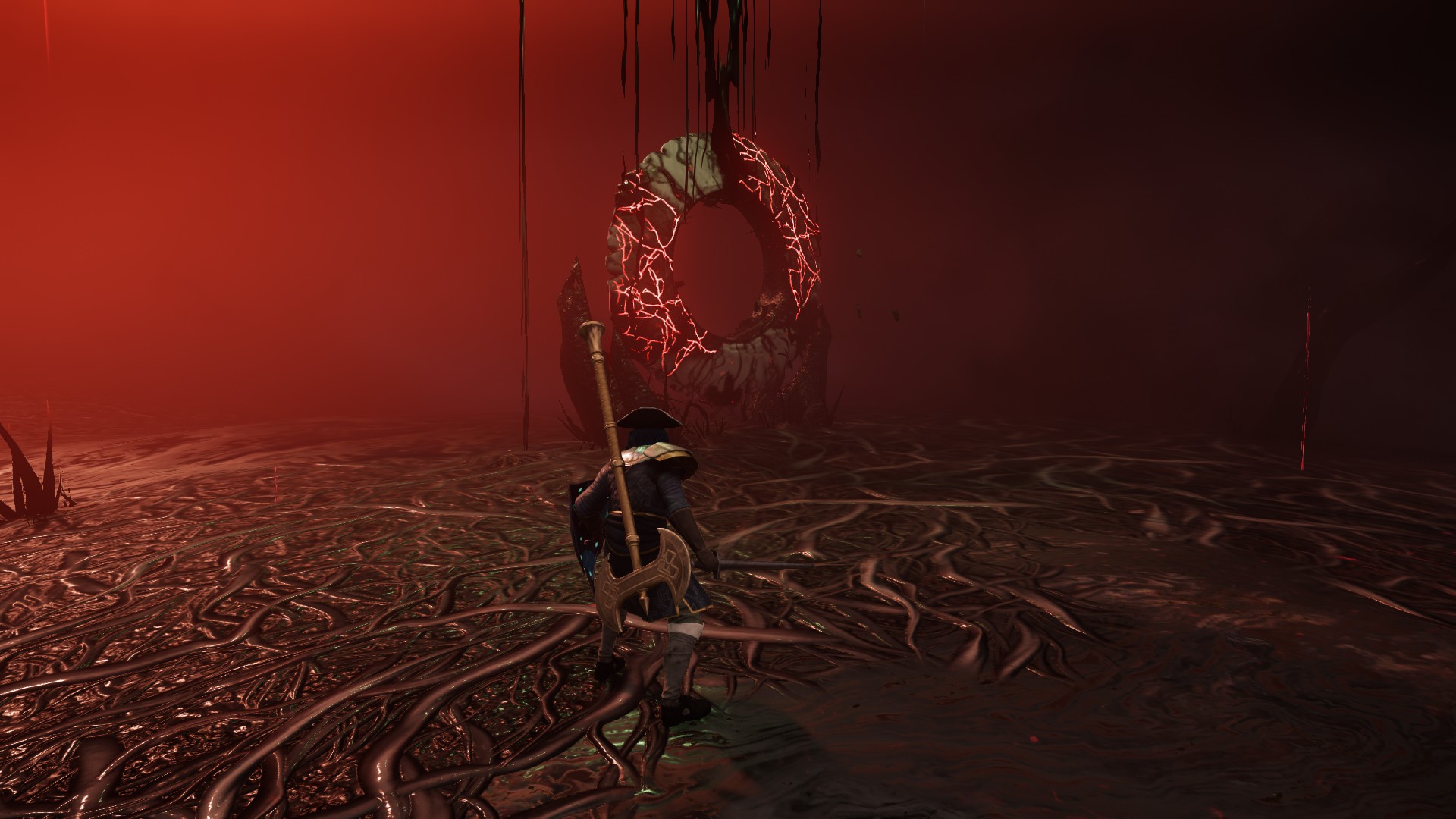 The progression also does a lot to keep me invested here as well. More than just simple leveling, there’s lots of gathering levels, crafting levels, and individual weapon trees to unlock, and all of it seamlessly works in tandem to sort of encourage roaming the world a bit more instead of running the roads from point A to point B and then back to point A again.

I’ve managed to make more progress and feel more character advancement by veering off of the beaten path, harvesting things, fighting animals and zombies and skeletons, and ransacking random points of interest for goodies to bring back home and craft into things. I’m rewarded for chasing shiny things, mapping the world, and packratting literally every single piece of crap that drops off of everything. No material is wasted. Nothing is useless. Even materials that I was avoiding like flint, which is lying literally everywhere, is vital to me because it’s needed to make gunpowder.

On the subject of crafting, approaching it less like a way to become a master craftsman to make huge piles of gold and more like you’re playing a survival game seems to be the right course of action right now. Everyone can learn everything and max out every craft on a single character, with no demands of interdependency for the most part. Some material needs will require some luck, but the vast majority of New World’s crafting is about self-sufficiency.

That, of course, means that if there is going to be an economy in this game, it’s going to be… well, very strange. Or almost non-existent. I’m hoping by the time I’m at the higher echelons of crafting there will be a need for the trading post, but I’m not finding one right now. Wait and see, perhaps. 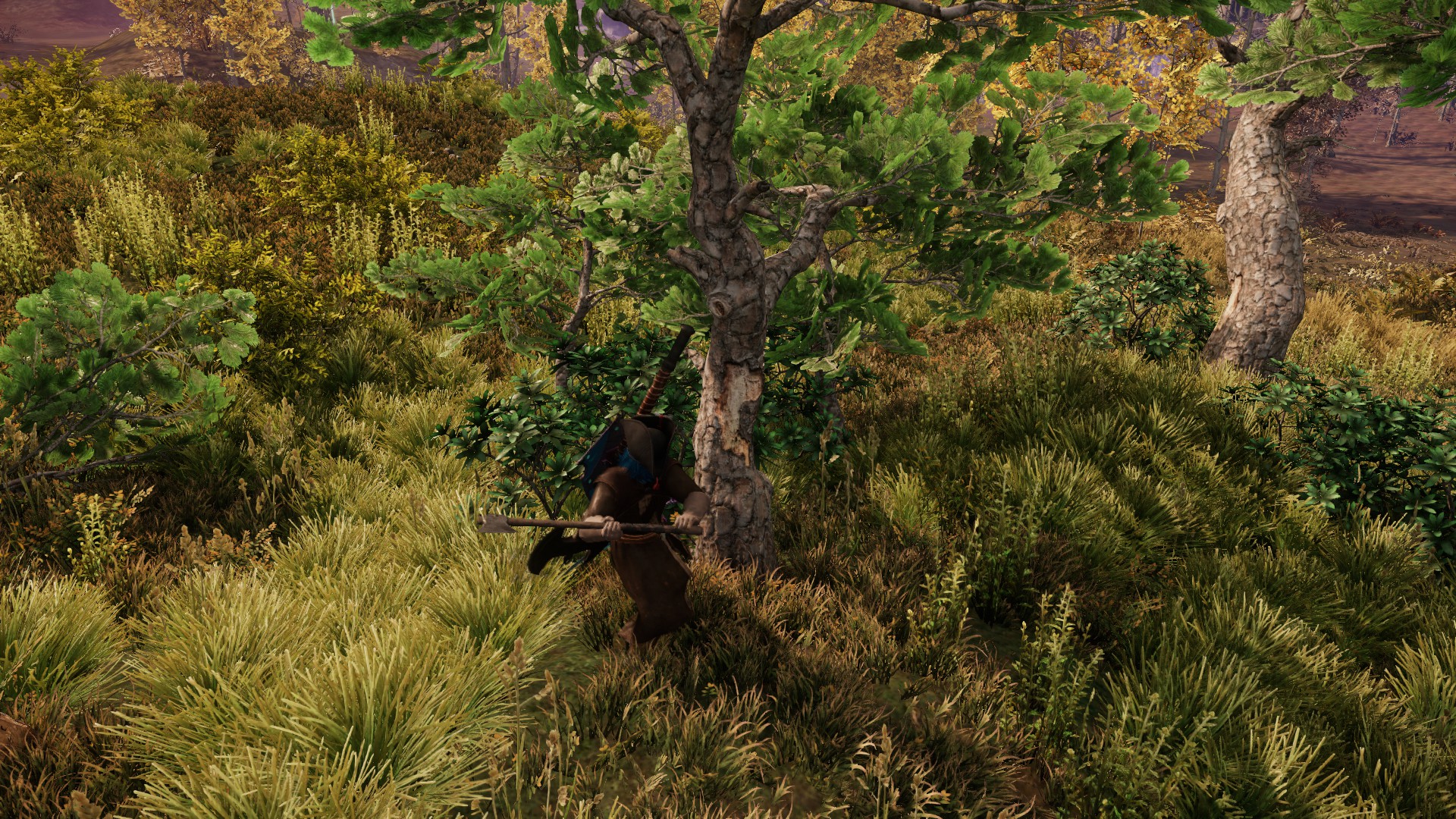 I will also admit to some other problems with the game as well. Some of the grinds for those crafts and gathering disciplines, for example, can feel absolutely monstrous; plant gathering has become a particularly high hurdle for me, with very specific plants advancing my skill, and I felt a sense of relief when I finally got to level 50 in woodcutting instead of a sense of accomplishment.

If I can circle back around to the game’s PvP for a moment: Territory control has some reported balancing issues. This can be alleviated a bit by PvE players like yours truly taking up faction quests to maintain standing (and there are some tasty rewards for doing so), while held towns have specific quests that players need to take up to level up a settlement’s crafting stations require players to take up quests to fill out material needs. Both of these systems require a lot of coordination and communication among players in a server, but right now most people are just focusing on their own personal advancement. So there’s a little bit of a gulf in design philosophy here and there; not all of the PvE and PvP gears link up together.

Even with that in mind, and even if this game isn’t blowing minds with its originality, what it is doing is done with a lot of care, some thoughtfulness, and enough barbed hooks that I keep hopping in-game night after night. Earning just a few more levels. Learning just a few more crafts. Exploring a bit more of the world and climbing the faction reputation ladder a bit more. I’m not mainlining the game; I’m not racing to get things. I’m just rolling around in the sand. 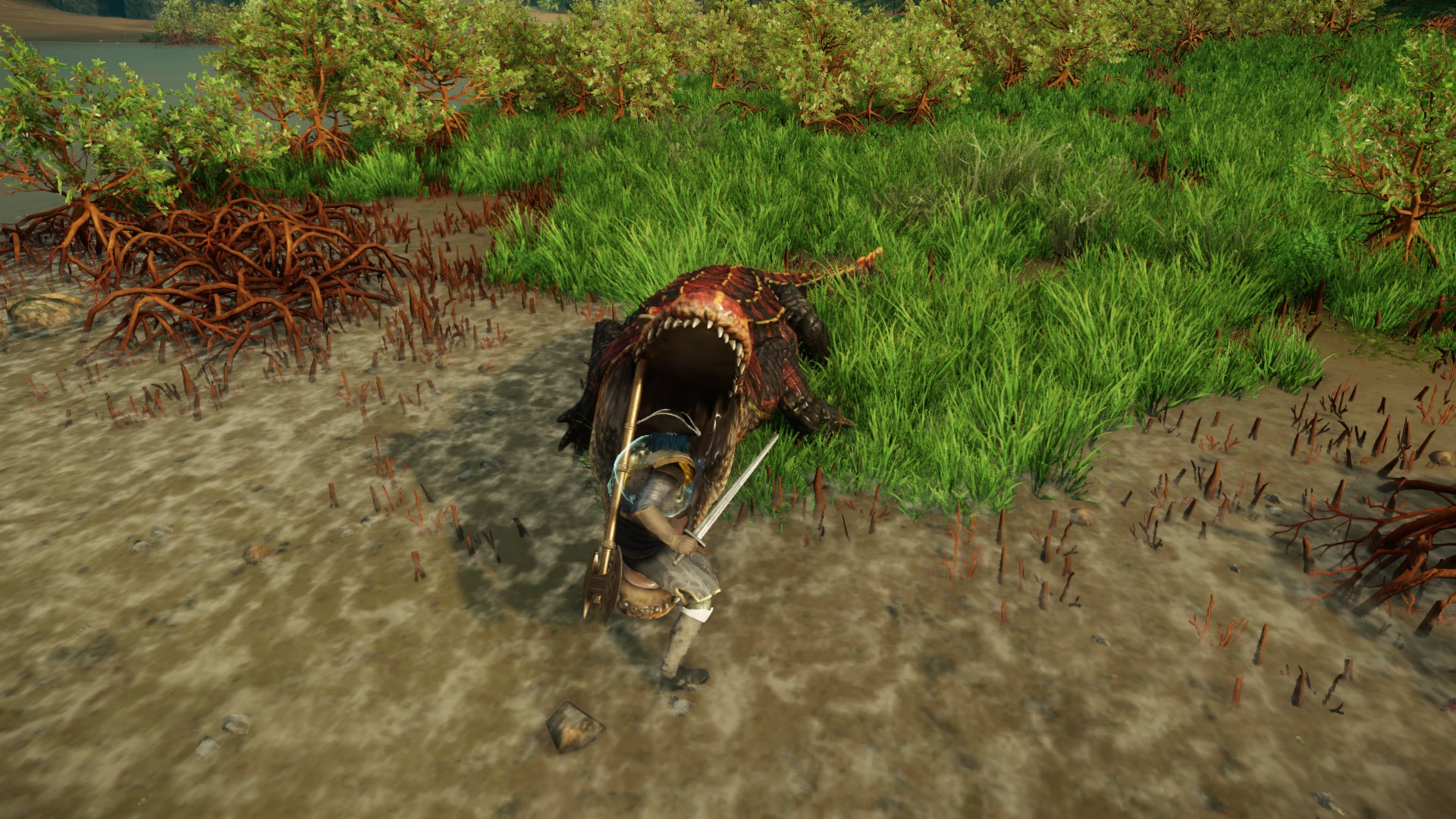 And I still have some things to experience. I’m just now beginning to push the edges of the central section of the island. I’m just now putting together the Azoth Staff, which I think is required to take part in island events that clear out huge clouds of corruption. I haven’t plumbed the game’s first dungeon yet, and the few times I have done things with friends and other random passers-by has me intrigued to see what that’s like on the tanking side of things. Also, I might just chase a random whim to learn some entirely new weapons, though that might be asking a lot of me considering my current gear and point allocation.

New World, by all accounts, should have been the most middling thing out there. It could have just fallen hard on its face. And if Amazon Games doesn’t treat this runaway hit right, it could topple over just as easily as it could grow. Still, I’m eager to keep on climbing on those various level grinds. I’m intrigued by what else I could run in to. I’m having a good time just running around, feeding whims and nibbling on all of the content leaves.

I can’t stop playing. I can’t stop enjoying myself. New World has me under its spell and I wholly accept my fate. It’s nice to enjoy a new MMO again.

October 3, 2022
You are going to send email to
MOVE COMMENT