Leading up to New World’s original launch, I had virtually no interest in playing. Even after Amazon Games pulled the ol’ switcheroo and added a bunch of PvE to the game, I still wasn’t sold. Hell, even after playing in a couple of betas, I still wasn’t on board. But then the final launch date was set. I began to hear the chant of the collective. “It’s a new MMO.” “It’s going to be a real MMO with a AAA budget.” “Amazon isn’t just throwing this out the door; it’s really put some time into it.”

Then came the feeling, that build-up of hype, that excitement to play a brand-new game on launch day with thousands of other players. So, the week before launch I bought in. Just like so many of the other writers at MOP, I’m in it. And I am having so much fun!

Several of MOP’s writers have covered the game so fantastically in this column already as well. From Tyler’s thoughts on customization options (or lack thereof), Chris’s masterfully written piece about how the game’s hooks sneak under your skin and pull you in, to Ben’s point of view from an Elder Scrolls Online and EVE Online player, we have covered a wide range of the New World experience.

So I’m going to try to complement their work today by coming at it as a PvPer who’s somehow gotten lost in the game’s PvE.

Leveling is a wholly PvE experience

I’ve cried, I’ve moaned, and I’ve whined incessantly in our Fight or Kite MMO PvP column about PvP games that hide their PvP until endgame. And so far as I have seen (through about 20 levels), New World’s more or less gone and done it too. I just can’t fully understand it. You want players to fight it out, but you don’t start encouraging and rewarding it until way down the line. In fact, I don’t know that PvP’s availability has even been mentioned by the game itself aside from when I chose my faction.

In New World, not only can you level up totally safe and free from any PvP, but everything basically leads you to playing more PvE. You start out on the island following your typical PvE MMO quest givers. Those quests lead you to other PvE quests and lead you further on to other PvE quests. Honestly, if I didn’t really know that this was originally intended to be a PvP game – or if I had turned off faction chat – I wouldn’t even know it was a big thing.

When you pick a faction, a bunch of splash screens fly by telling you about why you picked a faction and that there’s some PvP to do, but there isn’t anything really pointing the player in that direction. There are some PvP faction quests, but those don’t stand out any more than the PvE ones. The maps keep announcing that there’s a war and “this group” or “that group” is fighting – but so what? The game doesn’t go out of its way to explain how its PvP scaling works, so typical MMO players are going to assume they shouldn’t risk taking their level 15 newbies to get smoked in PvP, and if they aren’t paying attention to the war chants in faction chat, they’re going to miss the game’s warfare until much later in the game.

So if anyone is still out there, sitting on the fence on New World because you’re a PvE player and you just don’t want to deal with the PvP side of this game, rest assured it really won’t get in your way, certainly not while you’re leveling and gathering at least.

But personally, I’d say the presence of PvP, factional and beyond, should be dialed way up. If there’s more to do while leveling other than those random faction quests, then they need to be more prominent. If there’s not, then we need more. I think players would like local arenas that have a level restriction to join that fit the general towns level – something like classic Guild Wars had.

Flagging for PvP has been lonely experience

The only thing I’ve seen that New World does attempt to do to encourage you to PvP is offer you some bonus experience if you flag yourself up in the open world. Now, I’m a PvP boy. However, there’s nothing worse than finding a PvP hair in my PvE soup.

When I’m hunting, gathering, and killing regular old mobs, I’m usually kicked back relaxing and just enjoying my time. When you’re flagged for PvP while doing these activities, though, that isn’t the case because you can’t ever fully relax. You never know when someone might gank you. And my thoughts on ganking have been well-documented.

Now, I do try to think back to the before times (prior to the PvE overhaul) when presumably there wasn’t any flagging up or down for PvP. I can see how, if everyone is open to being ganked at any time in the open world, that PvP would happen spontaneously and naturally. Not only would that somewhat solve my issue above (although I do wonder how quickly players leveled without quests back then), but it also would prevent the real issue that keeps bugging me, which is looting. Don’t jump to the comments to freak out over flag PvP because I’m definitely not saying that we should have open PvP at all times. It’s just that I can see how switching from that system to this without actually handling interdependent features has caused the problems I’m having.

Since there is a mismatch between flagged PvP and unflagged players when you drop a beast or find a node to harvest, you just might be totally out of luck if another player snatches it before you. Now, for gathering nodes, I kind of get it. In a PvE game that doesn’t have player nodes, it’s going to be a first-come, first-serve kind of situation. But few things make me more angry while hunting a buffalo than hitting it with an arrow from yards away, only to see some random player run over and start skinning it – and I have no recourse to stop this.

Back in no flagging days, you probably could just beat them over the head with your sword, but now if they’re not flagged, you are out of luck. There really needs to be some kind of locking that occurs for these instances because it’s frustrating. 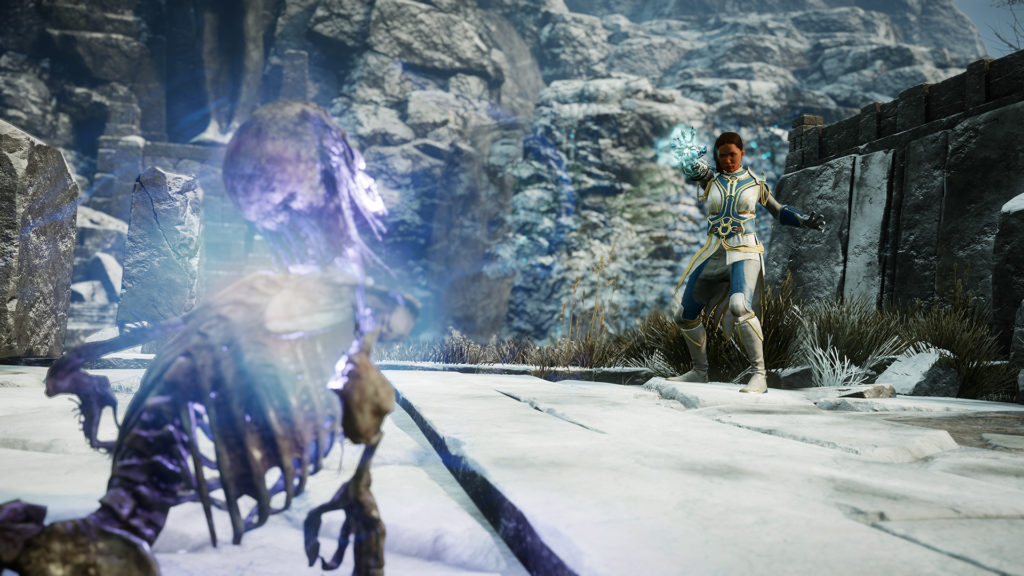 Another thing I wanted to point out after playing several nights flagged for PvP is that I haven’t encountered another player in the wild to fight. Granted, these are low-level zones, but it’s actually been very surprising. So I’m not sure. Maybe most players really aren’t interested in casual or open PvP at all, or maybe they tend to feel like I do and would rather not leave the option to be attacked open while they run quests and gather, preferring to compartmentalize their PvP moments for faction warfare.

Leveling with a friend is a frustrating experience

One last note before I wrap this whole shebang up. I’ve been playing New World exclusively as a duo team, and it has been kind of awful, at least in terms of syncing with one another person. I have absolutely no idea how it could have been so poorly handled, but it’s terrible.

For starters, despite creating accounts at the same time and joining the server together, we spawned in two different starter zones – there’s no way to choose to spawn together. Since I had no idea this was even a possibility, I just as well figured once we got through a few starter quests, we’d be sent to a matching zone, but that didn’t happen. Even once we both joined the same faction, the quests were different since it was a different town. Then, going over to the other town didn’t help a lot because all the quests to start were ones my partner had already completed. So, she can rerun some quests with me so that I catch up, and eventually the main storyline will get us on the same page and by endgame it won’t matter. But as a starting experience, it’s just needlessly messy and I don’t love it.

Despite all this, as I said at the top I’m really having a lot of fun playing. I see there being quite a few things that I don’t love, and I’m not sure if there’s really going to be enough depth to keep me playing long-term. Certainly right now, though, I can’t wait to log back in.