By now you are no doubt familiar with the guild halls arriving in Guild Wars 2‘s Heart of Thorns expansion. What you probably didn’t expect is that the expansion is available for purchase as of tonight and is already stirring up controversy for its $49.99 standard rate that comes along with a copy of the base game whether you’ve already got it or not. The deluxe version will run $74.99 and come with an extra character slot and several cosmetic goodies, while the ultimate edition runs $99.99 and is just like the deluxe set only with 4000 gems in addition to the fluff. All editions grant access to weekend beta events slated for the game, and many of the in-game goodies will be unlocked on accounts now instead of when the expansion launches.

But earlier today, ArenaNet wanted to dish on the guild halls coming to the game, and it was worth the flight to LA! I sat down with ArenaNet Game Designer Link Hughes, Design Lead Crystin Cox, and PvP Test Lead Jessica Boettiger here at E3 2015 to get a look at and talk all about guild housing. Here’s the scoop (and a video, too!).

What are guild halls? Let’s just say they are not your grandma’s dainty little houses… unless your grandma’s teeny tiny abode sits on a massive swath of land that encompasses half the county! Even as a veteran MMO housing aficianado, I was shocked and awed by the scope of these halls. Seriously, players will need to rethink the scale of housing; they are less halls and more zones. Don’t take my word for it: Check out the grand scope of them in the video below.

Another great aspect of these halls is that they exist as an integral part of the world in this expansion instead of as some tacked-on afterthought that is instanced away with no connection to what is going on. In fact, players will have to follow through the story and game play to earn one of these beauties (more on that below).

The halls are more than just one standard hall; there are two to choose from, Guilded Hollow and Lost Precipice, and as you probably noticed from the visual tour, they aren’t really “halls” at all! Each one is an outdoor zone with its own distinct style. Benefit-wise, there isn’t a difference between the two. They are both gargantuan, and both sport the same bells and whistles. The key differences lie is in their decidedly distinct aesthetics and theme.

Guilded Hollow, a monolithic cavern underneath the jungle, is connected to an abandoned outpost called The Forgotten Golden City. This hall is filled with hidden caverns, tunnels, and beautiful waterfalls, and it’s carved out of huge chunks of solid gold. The Lost Precipice, on the other hand, is a hidden canyon located northwest of the jungle. It features an abandoned secluded canyon settlement composed of a river, a temple square, and small buildings carved into the sides of the canyon. With so many sheer drops, Hughes called this style a “love letter to cliff diving and hangliding.”

Both halls are enormous, and guilds can select which they prefer. But guess what? Guilds are not locked into that decision! If your gang decides to explore the other one, you can switch between the two maps anytime without losing any progression.

Why would anyone want access to a guild hall beyond wanting a cool place to call home? Because like other zones out in the world, these halls are feature-rich with gameplay opportunities. Do you like crafting? There’s a brand-new crafting discipline (the scribe) being introduced with the Workshop to create decorations and guild-focused tools. If WvW is more your thing, the Warroom is your place; it’s decked out with new crafted upgrades and tactics that can help in those battles. (I’m drooling over the Charr car transformation that looks like a Mad Max like motorcycle and acts as a siege engine!). Do you like socializing? There’s a tavern, which also gives buffs. If you’d rather fight, there’s an arena your guild can host matches with other guilds at. And of course, there’s plenty of space for those who like to decorate to flex their creative skills.

As for the buildings, there are six different ones that relate to styles of gameplay that can be added to a guild hall. Hughes explained, “[These buildings] are taking the place of our existing discipline progression. We are moving the upgrades into these buildings and of course adding a host of new upgrades for players to unlock.” Don’t worry, though: Players who have already unlocked upgrades in the current system will still have access to them, with the exception of those that are permanently retired. 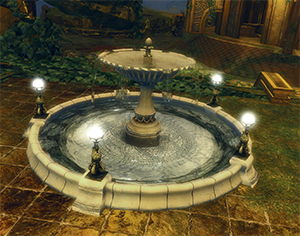 Back on the topic of decorating, there is a difference between the buildings and general decorations like tables, lampposts, and fountains. While the buildings must be placed in specific locations (players are basically just rebuilding the ruins), the decorations can be used freely. I can’t wait to see player creativity with this system and this space. It’s really almost as if players will be designing their own map. Fun fact: Hughes revealed that decorators can be active during an arena match, adding traps, turrets, walls, and other elements to the battle. He told me, “We’re really looking forward to how players will use their creativity to make their own new types of play. It should be really exciting.”

So the big question is just exactly how guilds can get their hands on these halls. Heart of Thorns is introducing a new organization into the world. Called the Guild Initiative, this organization was created by the world governments to mobilize guilds against the threat of the elder dragons that still survive in the world. Players who’ve noticed the scaffolding in Lions Arch have already caught a glimpse of the new headquarters where they will go and sign up to take part in this initiative, which will give their guilds certain benefits, including support staff and research projects.

More than that, however, is that guilds who head out to the recently discovered dragon minion hotspots around the jungle have the chance to take ownership of said spots if they eradicate the dragon threat and can hold it. (Good news: Guilds will get the ability to fast travel to their hall once it is unlocked — sound familiar, classic Guild Wars vets?.)

Perhaps one of the greatest parts about this new feature is that it is not going to be the domain of just the mega guilds of the game. Cox made it clear that the guild progression system is set up so that small guilds won’t get left behind and lose out. She mentioned that much of the progression is time-based, so a tight-knit group of 15 could progress a guild just as quickly as a giant guild. And for those who aren’t in a guild, visitors can be invited in to check things out, visit, or even participate in arena battles.

Hughes emphasized that ArenaNet looked carefully at the three CDIS that were done on guild halls and took the feedback to heart. One example is being implemented in the form of cross guild chat, something players have long asked for. Another example will take shape in the form of making sure progression is balanced for larger and smaller guilds. However, ArenaNet’s reps stressed that although they’re listening to everything, limited time and resources does affect what is launching now. “We can’t do everything tonight,” Hughes said. Emphasis on tonight! Cox emphasized that the guild halls are considered a core fundamental feature, and they will enjoy more developmental attention as time goes on.

You can prepurchase the expansion as of tonight.

I left this game because WvW while an amazing concept is just simply boring as shit … Hopefully the obvious fix of making it worth defending the capture points will make WvW more than a revolving cap fest.

rgkeydet
I was around for World of Warcraft’s attempt to incentivize guild recruitment with the Cataclysm expansion’s guild leveling system, and I don’t envy any Guild Wars 2 player who will encounter the coming automated recruitment spam for the first time when these guild halls need to be built.

A terrible debacle over this.  Their public relations has handled this very poorly.

Midgetsnowman AvatarOP Rozyn i don’t think the environments are “meh”. i think they are quite good. opinions…

Superbrak Eolirin  Well, there are a few changes that have been made, or are in the process or being made, that’d suggest that’ll be much less of a problem in the future.

Megaserver and the changes to map rewards should help keep map populations more balanced, and they’re definitely making it so that all of the story content can be completed solo; that dungeon you got stuck on is being changed in a coming update so that it’s a story instance that can be soloed. I can’t imagine they’d make the mistake of repeating that kind of forced group content to complete story related material given all the effort they’re putting in to removing the one instance of it that’s currently in the game.

And I’m not sure that you’ll be locked out of the Living Story unlocks because you don’t have the expansion; you might not be able to play them, but if they don’t restrict the unlock to people with the expansion, you’d still be able to log in with the vanilla client and unlock them, even if you couldn’t play them just yet.

Eolirin Superbrak Yeah I could… but its always been my experience that you either get in when the new content is fresh or you risk never being able to see all the content. Nevermind the LS releases I’d miss in the interim that I’d have to pay for if they interested me.
It took me over a year to finish GW2’s living story because I leveled too slowly and by the time I got to that point no one was running that dungeon anymore.
I don’t think I’ll start HoT months behind everyone else waiting for a sale.

Rustybladez  You don’t get another copy of GW2, that is just for new players.

Nreff tobascodagama  How would providing gems result in increased gold inflation? Gems don’t create gold, they just take it away from other players.

SoMuchMass Nreff BobDobalina  You know for a fact that there are no raids in HoT? Cause I’m pretty sure we don’t know what “challenging group content” means just yet.

Now to be fair, Anet REALLY should have announced all that stuff *before* announcing the pricing, but right now it’s really impossible to know what the value proposition is for HoT in terms of PvE content.

Superbrak  You can always wait for the inevitable sale?