The fact that WildStar is transitioning to a free-to-play model this fall is old news now. Folks have been hashing out their opinions on the matter for the last month and have indeed been talking about the possibility for far longer. So what more could be added to the conversation by talking to Carbine at E3?

Information — lots of information! Sitting down with Creative Director Chad Moore and Product Director Mike Donatelli, I learned more details about the both transition itself and the mega content update coming with it. The pair also announced that WildStar will be releasing in China soon, its first step in expanding globally.

More than just a business model

Perhaps one of the key points about this upcoming change is that it involves so much more than just converting from subscriptions to free-to-play. What else is on deck? A lot of it’s what players have been asking for. Donatelli told me, “What we’ve done for the last few months is execute on player feedback.”

Different systems have been completely revamped; player stats are completely retooled, and itemization on everything is altering accordingly. The team has also made adjustments to get more people into dungeons (and at an earlier level), a new arena has been added, and the story instances are accessible even earlier. Various quality-of-life improvements have also been implemented, from an always-on sprint (outside of combat) to moving Prime monsters — those mega group bosses — to their own lairs on the edges of maps so that players don’t unexpectedly roll into them while dodging regular mobs. Another very helpful feature is the sell junk button! On top of all that, a new navigation system will be implemented so players can track a waypoint on their minimaps.

But these changes are not totally set in stone. Even though the game has launched, Donatelli emphasized that this new update will spend time in beta. In fact, the reason the conversion is happening in the fall is precisely to give players time to beta test and offer feedback. And the team plans incorporate that feedback into the final launch of the new F2P version to make sure the changes made were the right ones. And Donatelli says the team expects to make changes: “We expect people to test our transition and be like, ‘We like this more,’ or ‘If you guys do that it will be better,’ and we’re going to make those changes.”

How many times has a veteran player who has put in countless hours in a game wanted to skip the nonsense of a tutorial? After the first few alts it becomes more than tedious to experienced players. Carbine agrees and has a solution for WildStar’s tutorial that will better cater to the individual needs of gamers. Moore stated, “We added different experiences based on your MMO knowledge.”

When players enter the game, they will have the option to choose between three levels of tutorial experiences. The novice level is a holographic simulation designed for those totally unfamiliar with MMOs, people who need to know about movement, how to talk to NPCs, etc. The intermediate level, on the other hand, bypasses all that and takes players directly to the arkship, which has been streamlined to get players into combat faster and provides details on WildStar specifics like sprinting and dodging. The final choice is the expert level that just jettisons the player directly to the first planet to begin his or her adventures already equipped with the levels and gear collected in the other tutorials.

In addition to this new tutorial selection, players are given much more information at character creation so they can make better-informed choices when getting ready to play. All races are clearly visible with important information on the selection screens, including which race/class combinations are allowed and which aren’t. As for choosing the classes and paths, the devs have also embedded videos that demonstrate aspects of these so players can see exactly what each does. The whole point, Moore said, is that “when players make choices, they understand what they make.”

And then there were four. If you’ve ever been in the position where you weren’t exactly sure which stat would be best for your class (who wouldn’t want Moxie just because?), you weren’t alone. Donatelli noted that more than a few players found the current system a bit confusing, with stat names and uses not readily apparent to players. That’s why the system has been revamped. Current stats will be replaced with four primary stats: armor, assault power, support power, and health. With names like that, you can pretty well tell which one will be most valuable to which class. Pretty simple, right?

For those long-time players who delight in getting the most out of builds by tweaking every last thing, this system seems too simple. Fortunately, the new system also includes secondary stats that will allow players to fine-tune their characters to fit the playstyle they want to embrace. For instance, there is vigor: Vigor will allow players to do more damage the higher their health is. That definitely changes the dynamics and strategies in battle, as a healer would want to know to keep this DPS character’s health topped off so she’s dealing the optimal output of damage. Other secondary stats include life steal and crit; they all allow for more specialization within the classes.

Donatelli told me that the team has worked on this system for six months to make it both easy to learn and hard to master, offering players a wide range of individualized play experiences by specializing within the classes. “You can tweak your character in really interesting ways that weren’t available before,” he said. Previously, every Stalker was a crit Stalker, and that’s just the way it was done. Now, you can broaden your horizons. It’s the best of both worlds: The new players will understand the basics of the system straight away, whereas those who want to master the intricacies of all the secondaries can min/max to their hearts’ content or experiment with unique combinations.

Donatelli explained to me that even though WildStar dungeons “are some of the most lauded pieces of content in the game, with really cool mechanics and unique and creative boss fights,” the team still “had trouble getting lots of people into that content.” Since there was really no grouping before the first dungeon, which opened at level 20, it felt like hitting a brick wall. Dungeons had such a steep learning curve that needed to be addressed. Fun fact: Donatelli says the internal project name for all this was Dungeon Smoothies.

Recently, the team earlier opportunities for players to familiarize themselves with group dynamics, starting with the ship hand min-dungeons at level 6 and then the training dungeon at level 10. Come fall, players will find that current dungeons have had their levels adjusted in order to bring people in sooner. Stormtalon is lowered from 20 to 15, and the dungeons will be available ever five levels thereafter. Donatelli pointed out that “you will now actually level through group PvE dungeon content, whereas before there were big gaps where you couldn’t.” Plus, he argues, “the pacing of the entire dungeon experience is way better now. It’s a lot more fun.”

Besides the dungeons, the story-driven instances have also been releveled, and a new one was created for level 15: Alpha Sanctum. The fact that the big overarching story that tells what’s going on with the planet Nexus was locked behind instances that players couldn’t access until level 35 meant that many players never got to the point they could experience that part of the game or even have a feel for what was going on. Now they get a sense of the story and purpose much earlier on in their play. On top of all this, the new PvP arena teased back at last year’s Gamescom will finally be added. Cyro-Plex, the biggest arena to date, is an ancient Eldan ruin covered in ice and has lots of verticality in the gameplay.

Housing: Welcome to the neighborhood

After the free-to-play transition, another new feature will hit WildStar. Whether you pop into your home only occasionally to harvest a node or spend countless hours decorating and redecorating, you might be excited by the new news on housing. Donatelli and Moore revealed neighborhoods, a new way for communities to come together. A neighborhood is a mega housing island consisting of five plots as well as communal space that players can decorate and hang out in. A player and four friends can take their existing housing plots and just plug them into the neighborhood map, and up to 20 players total can have decorating permissions as members of said neighborhood. Just think of the block parties! As Moore said, “Housing is the best feature in the whole wide world.” 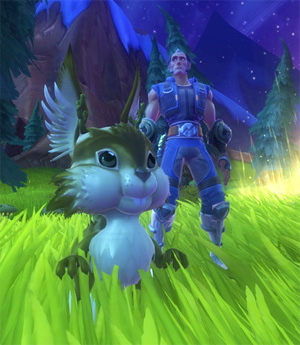 To the loyal go the spoils

We already knew that there would be a loyalty program in place, and Moore and Donatelli elaborated on some of what that entails. There are multiple ways players earn credit in this loyalty program. Loyalty items will be unlocked based on the investments players have made in the game; everything from buying the game to time subscribed to buying or using C.R.E.D.D. lets players accumulate points. An important thing to note here is that it isn’t just the folks who pay cash outright that earn loyalty. Free players can also participate in the program, either by purchasing C.R.E.D.D. from other players or using the in-game “sweat currency” — called Omnibits — instead of NCoin to purchase things from the MTX store.

What kinds of things are available? The very first loyalty tier has a furry furrelope pet companion, a totally adorable chipmunk with chicken feet, and an immortal miner skill hat. There’s also upgraded crafting abilities, reduced resurrection timers, and complete access to the social systems the that first tier. “As you build it up over time, there will be additional tiers and even cooler stuff,” said Donatelli.

On top of the tiers there are a few special loyalty bonuses. For those who have subscribed since the F2P announcement, there will be other special goodies. And for the die-hard veterans who’ve maintained a subscription since the game launched, there is an extra special reward.

While the team is obviously expecting a large upswing in players once the conversion takes place, Moore said Carbine has been surprised by how many people responded with purchases of game right now in order to build up loyalty before it goes F2P — apparently there were over 100K beta sign-ups the very first day they were available.

Massively Overpowered was on the ground in Los Angeles, California, for E3 2015, bringing you expert MMO coverage from NCsoft, Blizzard, Ubisoft, BioWare, and everything else on display at the expo!
Advertisement