END_OF_DOCUMENT_TOKEN_TO_BE_REPLACED
I spent all of the last column talking about Final Fantasy XIV‘s most recent patch, but boy, there’s still more to talk about. Who would have seen that coming? The answer is you, probably, if you read the end of last week’s column. I said that this was exactly what I was going to do. It wasn’t subtle, either. Obviously, we’re still going to be talking about the patch and what’s going on therein.

Last week, I hit several of the big points and the stuff that I’d had a chance to experience. There’s still more stuff to discuss, though, and there’s so much patch in general that it’s going to occupy the next several weeks of my thinking at the very least. Heck, there’s at least one very obvious addition that I didn’t discuss at all last week… due, at least in part, to the fact that it’s not actually in the game yet. But it will be in the game soon enough, and I think it’s never too early to start talking about PvP.

The Feast and PvP gear

PvP gear seems to have finally been fully embraced in its role as cosmetic gear. At this point there’s nothing stopping you from picking up any of the PvP gear currently in the game and using that for your glamour if you so desire — nothing aside from the cost in currency, which can be substantial, made more so when you notice how long PvP queue times can be with some degree of frustration.

I’m glad, on some level, to see the rank requirements for this existing gear removed (and the fact that the new gear has none to begin with). Still, at this point, the biggest issue remains the fact that actually getting into PvP requires a bunch of patience. Queues are never particularly well-populated in my own experience, which means a whole lot of sitting around and waiting; the actual play mechanics are still rather heavily dominated by people who are already at higher ranks.

The Feast, on a whole, is another effort to make the community care more about PvP and what it can provide, so it deserves (and earns) my appreciation for that alone. Of course, it also achieves that with the same sort of season-based competition that usually earns a degree of ire and frustration, so it’s a mixed bag. I also think that the game is still not really set up as a particularly good PvP game on a whole, but that’s just a matter of personal preference.

Actual Feast content should be getting added this week, so we can see how well the arena variant works then. I’m hopeful, and I’d be happy to see people getting into PvP as a whole, but I will admit I’m not holding my breath.

Here’s the thing about Hildibrand: I honestly believe that the developers didn’t originally plan to bring him back in Heavensward, but fan response caused a change in that plan. This isn’t explicitly stated, but it was certainly implied through statements at conventions and stands to reason. That’s all well and good, but it’s notable that his return consists of two quests with no major content included that comes about eight months after the expansion launch.

I bring this up because I think it illustrates an important element in how long development on FFXIV actually takes. The game’s content pacing happens because the developers work ahead with a lot of foresight, not simply because Naoki Yoshida appears to have last slept around 2010.

As for the actual quests… well, it’s Hildibrand. If you liked Hildibrand before, you’re going to still like Hildibrand. I adore Hildibrand, but it’s not exactly repeatable content that’s going to appeal to everyone, nor is it designed to be so. Just by saying Hildibrand, you know what to expect. 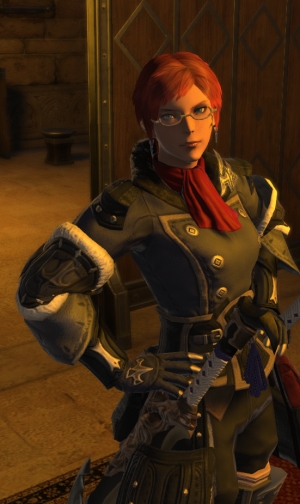 Can I be a mentor? Yes. I fulfilled the requirements before the patch; it’s always been something I could do. Am I a mentor? No. Have I seen people who have no business with the little crown icon wearing that icon next to their heads? Oh, yes indeed I have.

The reality is that this was always going to be an issue with the way that the game is structured and how the mentor program is set up. The Dunning-Kruger effect is in full force, and the criteria established are all those that require a certain amount of patience more than skill. Sure, the fact that you need a certain number of commendations adjusts things slightly, but we all also know that commendations alone don’t say a whole lot about the player. They’re handed out based on individual whims.

Friends of mine who have jumped into the mentor pool have mentioned that mentor chat turned nasty and unpleasant in about fifteen seconds, to the shock of no one. So take that as you will. I think it’s a good idea still, but the actual mechanics of it run into some issues when they involve other human beings.

As a result, I haven’t yet dove into mentor roulettes; I have, however, been taking much advantage of the fact that I can queue for almost everything else as a group now. That makes me happy in ways you don’t even realize. When I want to level something with my wife – a useful prospect, as we both have alts to level – we can just group up and queue instead of finding the best dungeon for a character and hoping that we both have something around that level. That’s all good stuff.

I love these huge walking bugs.

See, the Vundu quests were just plain silly. There were some serious underpinnings, but you can’t have that much of a quest line revolve around dance fighting without the quests ultimately being a comedy. And the developers knew all of this; those fat birds were meant to be chuckled at and enjoyed on that level. This is fine. Out of the first five beast tribes, two of them were very clearly intended to be silly from the start and more or less delivered on that premise.

But the Vath are different. Yes, they are funny… and they’re also poignant, tragic, and relatable at turns. The quests slowly paint a picture of a people that have lost everything except their individual identities, and what it means to give up so much simply for the sake of retaining that individuality. I haven’t capped the tribe quite yet, obviously, but it’s a great bit of storytelling that underscores just how much these tribes can lose and what it means to regard them as something other than simply enemies.

At the same time, it’s also an exploration of ridiculous bugs feeding eggs to goblins. So that’s just plain ridiculous.

Feedback, as always, is welcome down in the comments or via mail to eliot@massivelyop.com, as we always do it, etc. Next week, I want to talk about the materia melding for the new tomestone gear, what should be considered for the future, and why this was at once a really good idea and a really bad one.