END_OF_DOCUMENT_TOKEN_TO_BE_REPLACED
I spent quite a while poring over a recent gem of a video that served as a fantastically nostalgic trip down memory lane through its condensed retelling of the Living World season 1 story. The cleverly constructed movie was made possible by the historic work of several Guild Wars 2 enthusiasts, with several contributions being knitted together in a coherent order by Youtuber Dreamy Abaddon in an almost 3-hour delight. Although much of the content has not been voiced over or personally recorded by Abaddon, the amount of effort that has gone into creating the piece has to be commended. It’s fantastic to remember the roots of the Living World system in this way since we can no longer revisit what many would consider it the best season to date.

In this edition of Flameseeker Chronicles, I’m going to take you through a lighthearted list of particular moments or sentiments I’d forgotten about in the haze of all that story content, which I hope will inspire you to check out the full movie for yourself, especially if you missed out on Season 1. My list is a little spoilerific for those who aren’t up to date with Scarlet’s story, but since it’s such old content I doubt any of you will shout over that. In any case, I hope you enjoy my list of forgotten favourites from Season 1 and will collate your own best moments in the comments below.

If you haven’t already watched the movie or experienced Season 1 yourself, grab some drinks and popcorn and get watching! This article will still be here when you’re done, promise!

1. I forgot how cantankerous Rytlock was

Oh, Rytlock… you know I love you, man, but there was no need to be so callous to Braham and Rox. I get it: Uncertainty and threats to the Citadel were at the fore of your mind when Braham came to you for help, but with the context of what came before Season 1’s unrest, I would expect you of all people to respect safety in numbers. Norns are fine tools when they’re given a guiding hand, even if they are led by a stroppy teen with a chip on his shoulder that’s the size of Eir. And don’t even get me started on poor Rox; she jumps as high as you ask over and over again and still doesn’t get anything more than another dangling carrot for her efforts, yet you don’t hear a word of complaint coming from her direction.

Looking back, I love how Rytlock sticks to his guns throughout the season and that it helps solidify his strengths and weaknesses going forward into the next season and the expansion. It certainly helps us have the context needed to understand how Rytlock could survive in the most hostile environments and ultimately become the first Revenant through sheer strength of will.

2a. I forgot how far GW2 voice-acting has come

I really enjoy the fact that so much of the GW2 content has full voice acting. We’re spoiled now with even more NPC exchanges we can stumble across than ever before, but I really appreciated hearing that older dialogue and realising how much more developed some characters and their voice actors have become as the story unfolds.

2b. And I forgot how good Scarlet’s voicing was!

As an extension of this point, I have to applaud Tara Strong for bringing a wonderfully complex and frankly bone-chillingly insane evil villain to life.  I can’t imagine successfully tackling the fine balancing act that must have been a core part of the role: One mistimed maniacal giggle or overzealous trill could have overblown the characterisation and made a clown of Scarlet.

3. I forgot how cute Baby Devourer Frostbite was

Rox’s adoption of ikkle baby Frostbite was terribly sweet! Shooing and growling wasn’t going to hinder the little albino devourer, who made it far too difficult for Rox to say no to those adorably beady little eyeballs that gazed longingly at her. It isn’t long before Frostbite weans his way into the unflappable Charr’s heart and earns the name Frostbite, which still makes me smile even though the process is rather short and sweet.

4. I forgot just how green Braham was!

One of the nicest touches of character development in Season 1 has to have been how Braham, for all intents and purposes, needed the stability and reassurance offered by Rox in the early days. When you see a character who’s the size of the broad side of a barn, it’s all too easy to forget that he’s young, inexperienced, and much more fragile than you’d expect.

5a. I forgot how politically topical the Consortium/Southsun Cove elements were

When I think of the political climate in GW2, my mind instantly jumps to the humans and Divinity’s Reach, but looking back on Season 1 has encouraged me to take a look at the bigger picture. In Southsun, we’re faced with a scenario that basically amounts to slave labour and the prioritisation of profit over people, and this culminates in the karka attack on Lion’s Arch.

5b. And I forgot how brilliant Canach’s master plan was

Canach is now a lovable rogue that the Commander has come to trust and respect, but it wasn’t so in Season 1. Canach was arrested for his part in Southsungate, which is how he came to be in the pocket of Countess Anise later on in the story. Before his capture, however, Canach hatched a revenge plot against the Consortium that would make even the fanciest mystery writer nod in approval.

6. I forgot just how questionable Scarlet’s intentions for Lord Faren were!

Oh my goodness, I’d forgotten about poor Lord Faren! Although Countess Anise has secured the safety of Queen Jennah in Scarlet’s Jubilee raid, the heroic young lord was not quite so lucky, and he ended up being a brief captive of the twisted sylvan. Fancy red pants, fire-wielding torture machines, and the maniacal laughter of Scarlet made for one of the most questionable cutscenes ever to be seen in GW2!

7a. I (almost) forgot about first encountering E!

This is a little bit of a cheat entry because the existence of this unknown “E” figure has bothered me since forever, and I believe I have mentioned it several times throughout Flameseeker Chronicles’ history. I did forget the specifics of how he entered into the story, however, so it was really nice to have that light-bulb moment of remembrance that helped reconnect story threads in my mind. 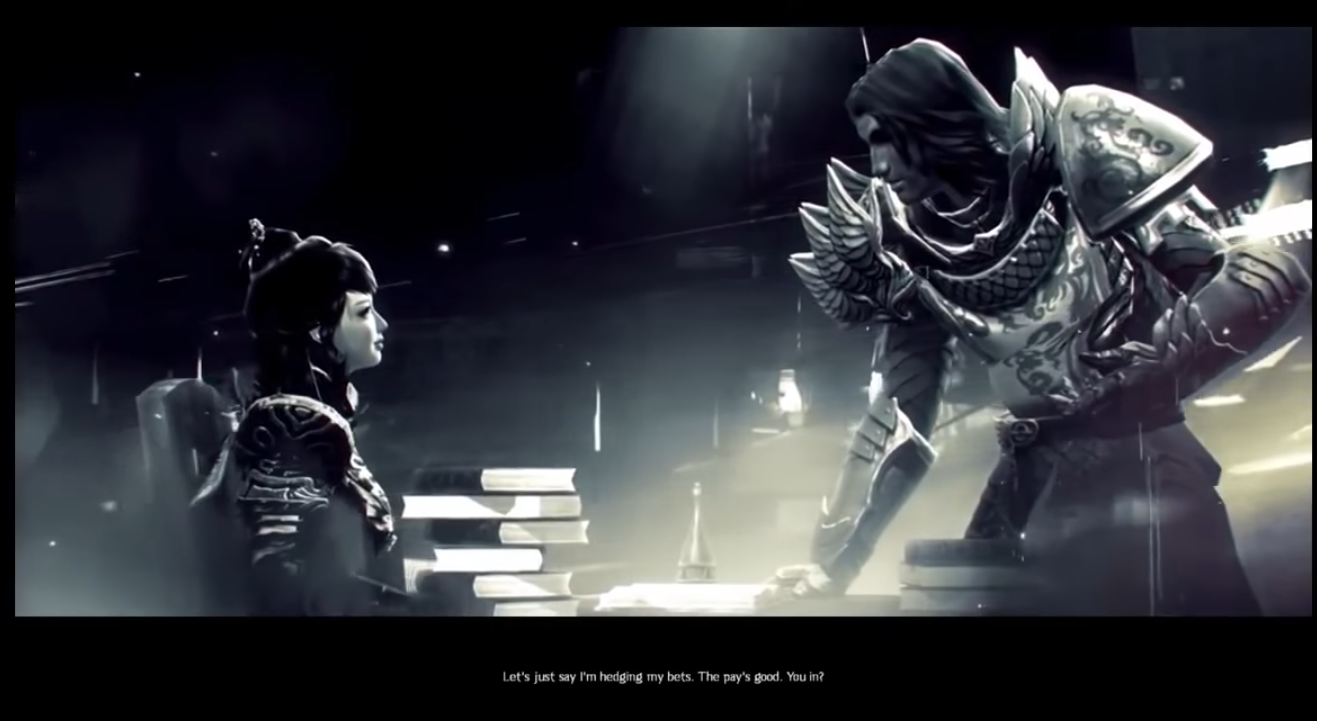 7b. And I forgot how film noir Jory’s intro story thread was

Maybe it’s because of how far she has developed since we first witnessed the combination of Marjory’s profession, backstory, casual airs, and dulcet tones, but I’d forgotten how strongly these elements came across when we first met the necromantic detective. Her crumpled edges are even softened by an upmarket dame with an idealistic outlook and pretty face… could it get more film noir than that?

8. I forgot just how flashy the whole season was

It’s easy to see why Season 1 was such a firm favourite for many players when you watch all the action pulled together in this movie, especially when it comes to Scarlet’s endgame playing out. Without immediately throwing another dragon in our path, ArenaNet managed to make such an impactful, frightening threat for the races of Tyria to rise up against.

9a. I forgot how much of a brat Taimi was at first

I have to confess that I’ve always had a soft spot for little Taimi and all of her eccentric ways, which won’t shock any regular readers in the least. I love that her stubborn, headstrong demeanour was at first turned on those who would become her adopted family of sorts, particularly since her quick wit was used to such great effect in order to keep her close to the action for as long as possible. I particularly appreciate how Season 1 spells out that Taimi’s genius could have very easily been manipulated by Scarlet and the side of evil without the involvement of the Commander and his or her allies. 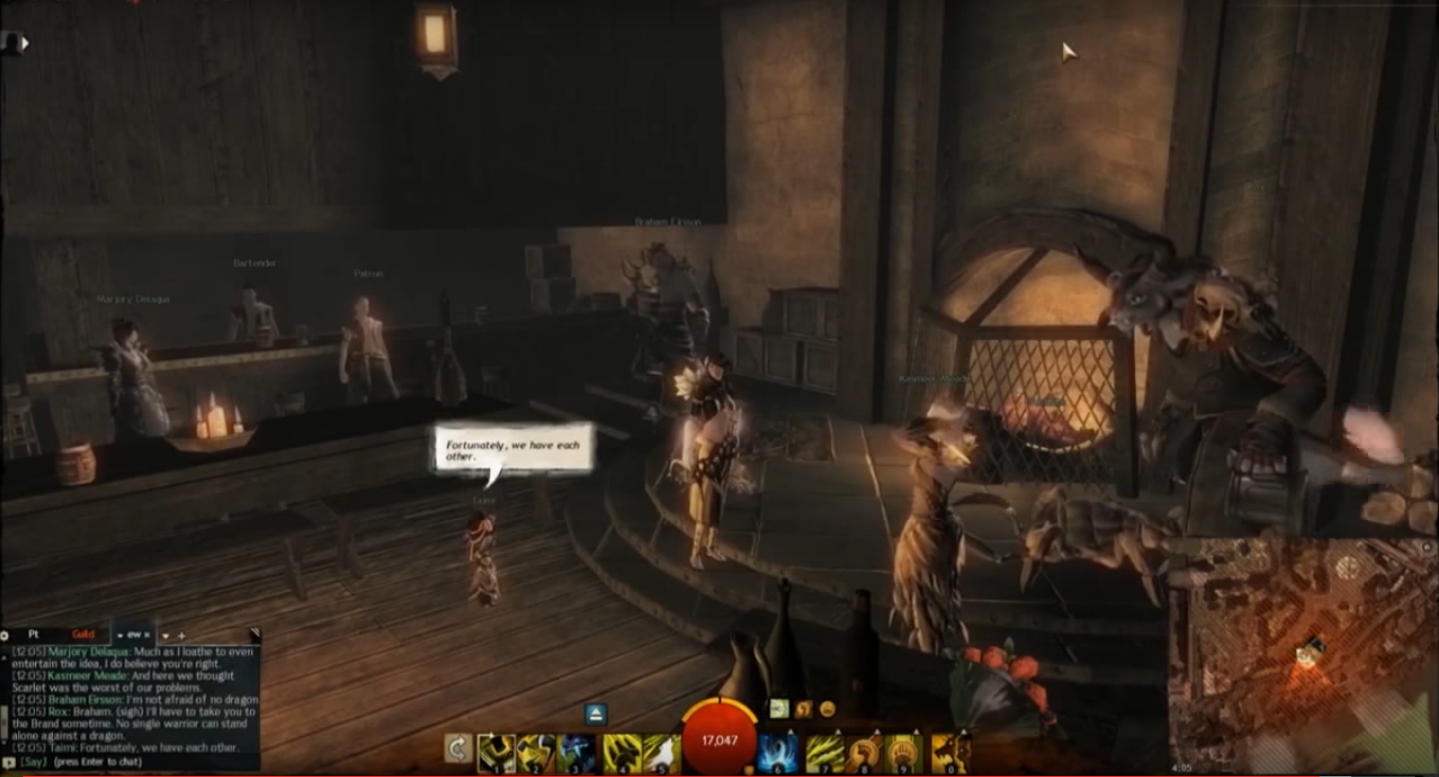 9b. And I also forgot how sweet her exchanges with Braham were

“Uh huh…” seems to be Braham’s catchphrase when it comes to dealing with Taimi’s enthusiastic techno-babble rambles. She doesn’t seem to mind in the slightest, and in fact finds Braham to be refreshingly accepting of her thoughts and opinions due to their closeness in age. It most certainly helps that she thinks she can manipulate the oaf into her way of thinking, but we all know that he cares too much to let her stray too far down that rabbit hole.

10. I forgot thinking that Jory was dead

I really did believe that Jory was killed by Scarlet in her final stand, and I think we all owe Rox a debt of gratitude for saving her life at the cost of her place in a warband. In such a huge encounter that wrapped up a huge chunk of story, it totally wouldn’t have struck me as harsh if ANet had made the decision of off a key character. After all, without a real sense of risk, none of the heroes of Tyria would be at all heroic for going out into the world to face the greatest threats the land can hold. My heart was in my mouth for the few moments that the team left us hanging.

I’ve pulled out my list of great moments from Season 1, but I’d love to know if the movie brought back any particular favourites for you. Let me know your thoughts in the comments, particularly if you sat through the full video.

Magic Legends will reward you for playing its March beta

Path of Exile previews the bug fixes coming with its next...