As I watched Nick Tarabay stand on stage hype up the audience in the Main Theater for PAX West 2018, I thought it was pretty cool that Anthem was able to get find a celebrity to introduce the game. I know Asher from Spartacus. He was great in that series. I didn’t know he was a gamer. As it turns out, he isn’t; Anthem is actually his first video game. Bummer, right? He’s the voice of Haluk in the game, but if he had no real connection to gaming, why was he there?

So I took a breath to listen to the rest of the presentation and panel. I watched the video that we featured on Monday the same as everyone else, and I was hoping to hear what the story was about. I was hoping to get a better understanding of what we were actually getting into, but the video it really didn’t provide it. No, I’m wrong, it did tell me something: The story part — the most important part of the game for a lot of BioWare fans — will be limited to Fort Tarsis.

Anthem is a very pretty game. The world looks amazing, and it might be one that I would want to live in like Mass Effect and Dragon Age. But I have concerns.

It should be great!

I want Anthem to succeed. Truthfully, I want almost all games to succeed. I like games, and even if I don’t like a specific genre of games, it doesn’t mean that there isn’t something valuable in the game’s design. I cannot play MOBAs well, and I don’t do click-to-move with any kind of skill. But just because I don’t like that genre doesn’t mean that I want, let’s say, Torchlight to fail.

But Anthem is my genre! It’s multiplayer. It’s sci-fi! It’s BioWare! If you mention those three things in a row regarding the same game, I don’t care if it’s called Littlest Petshop’s Springtime Funtown, I’m playing that game! Similarly, I already know I’ll be buying and playing Anthem – but that doesn’t mean that I think it’s going to be good.

I wasn’t at E3 last June, but I have read the articles from those who demoed it there. Most talked about how fluid the action is and how much better everything felt over the previous third-person shooters that BioWare has been in charge of. And regardless of anything else, I believe that the mechanics of gameplay will likely hold up. I am genuinely interested in how Strongholds are going to work, and I’m concerned that, as in Destiny or Star Wars: The Old Republic, players are going to quickly run out of things to do. 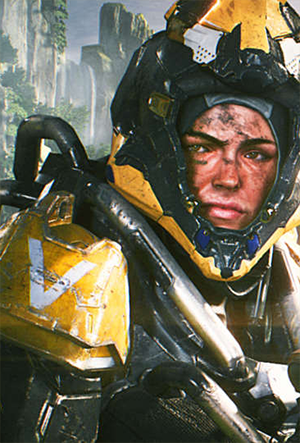 Why would you call something a mistake that wasn’t actually a mistake? During the gaming pre-panel session, one of the members of the press asked what lessons were learned from SWTOR that helped with Anthem. And the answer that the developers gave was “the ability to have to vote on the choice you make.” They went on to say, “That’s where ‘my story’ came from. We didn’t want to do that. We found that players didn’t like when the group decided on choices that didn’t work with how they were trying to play their character.”

For me, that was a fundamental misunderstanding of how the group content in SWTOR even worked. You did vote on how the story played out in the flashpoints, but it didn’t affect the overarching story at all. In fact, the only impact those choices made was on your dark- or light-side points. And the players did like the voting! What was most frustrating to the players was having to wait for those who wanted to play through the story when all they wanted to do was run the dungeon.

Why would you get rid of a BioWare staple in storytelling? BioWare has always had romances in their games. Granted some of them were really, really terrible, but it’s become a staple and frankly a reason many fans play BioWare games. BioWare games were some of the first Western RPGs to actually have compelling love interests.

BioWare, do you even know how to BioWare anymore? That’s like me saying that I don’t like Star Wars anymore. During the panel, it was even played off as a joke. They played it off as if romances would somehow create generic characters, that it’s better to get to know the characters without adding the romance interest.

Why are key people leaving Anthem? We know for sure that two writers and a producer left BioWare Austin over the last couple of months. We also know that two BioWare writers who were instrumental in the creation of SWTOR will not be back. Drew Karpyshyn and Hall Hood left a few months ago, and James Ohlen left about a month ago.

Other than minor rewrites, it’s most likely that Karpyshyn’s and Hood’s work was done on the game a year ago, but that means that the continued story that Producer Mike Gamble was talking about being so important to the game during the panel will be written by someone else.

With the departure of Ohlen, that means that all of the BioWare old-guard with maybe the exception of Casey Hudson (if he’s considered old guard) have left the company for other work.

And I don’t know if it’s widely known, but Alexander Freed would periodically come back to write for BioWare because he’s really good at it. But now that he’s joined former BioWare Lead Writer Daniel Erickson at FogBank, I suspect we will likely never see him on a BioWare writing team again.

Those are the people that we know about. Who knows how many others have stepped away under the radar.

I want Anthem to work, and I want it to be good. But during this convention season, the only people who have seen the game in action are a select group of press sites and the people who are creating the game. The game launches in less than a year, and there is really not much seen other than tightly controlled viewings. Usually, when we see such tight control, there has been trouble with production. Given BioWare’s recent history with Mass Effect: Andromeda, and the other things I mentioned before, I have concerns.

What are your thoughts? Tell me that my worries are unfounded in the comments below.