Let’s cut to the chase: There was quite a bit to learn and celebrate about Paladins during the Hi-Rez Expo this fall. Announcements, reveals, and teaser trailers abounded. Add to that the panels and interviews, and there was more info than I could shake a single feature at, but I’m going to round the lot of it up right here for you. We’ve already covered Imani and the Assembly of Champions community leadership council, so this will touch on the rest of the 2019 plans. Those plans involve new champions and maps, quality improvements, fan-requested features (cheer for clans!), story and lore, and more. This all will make 2019, at least according to Evil Mojo Games, Paladins’ best year ever.

The popularity of Paladins

I like Paladins, and it always made me sad to see its smaller fanbase at the Hi-Rez expos over the years. Yes, the game was newer, but I worried if it would gain traction — especially after Cards Unbound looked to drive everyone away. Apparently, I needn’t have worried. Hi-Rez CEO Stew Chisam said, “Paladins really found its legs this year. It’s also had a phenomenal year — its best year in pretty much any metric we look at.” Really?!

As I learned over the convention, while SMITE has a larger fanbase in North America and Western Europe (better represented at the expo due to easier travel), Paladins has a massive fan base in Latin America and Eastern Europe. Paladins’ launch on Switch earlier this summer added millions more gamers worldwide, and the shooter is sitting at 30 million gamers now. Yeah, that number did surprise me.

Part of that allure could be that Paladin’s offers a character for everyone, no matter what genre you come from, from FPS shooter to MOBA to RPG to MMO. The devs are proud of this and intend to keep fostering this. During one panel, devs discussed how the game has traditional shooter champions (check out them guns!), hybrid champions (combining FPS mechanic with something fantastical), and non-traditional shooter champions (fantasy features and ability-driven). See? Something for everyone. The hybrids are noted to embody the Paladins brand, capturing its uniqueness.

When most evil things have plans, you should watch out! Not so here: You can still watch for these Paladins plans, but more with anticipation instead of trepidation. First off, the shooter will be getting a new thematically linked update every month. Spread over these updates players will find a total of six new maps (three of which will be siege maps), six new champions, and the shooter’s very first ultimate skin. A new battle pass will also happen every two months. 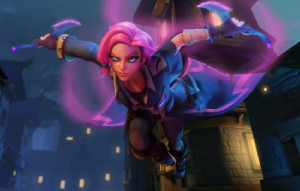 But it’s not all about shiny new content; it’s also about smoother, less buggy new — and old — content. 2019 is the year new updates will hit the PTS earlier so that more bugs can be found and squashed, and polish can be better applied. Players will have more input there was well as from the Assembly of Champions. This input, along with all the feedback gleaned across social media, content creators, Reddit, and such (important, as the CMs emphasized how the different communities had different responses to announcement), is complied and presented weekly or bi-weekly to the entire team in order to address and respond to it.

But back to content. Imani will be the first new champion, going live around January 16th, 2019. Players who want to test her out, however, can jump on the PTS in just a few weeks; on December 17th, Update 2.01 hits that test server. Brand Manager Alex Cantatore told me that there was talk of releasing Imani nearer the expo, in December. However, with so many different tech challenges with her and the dragon, the team wanted take the extra the month to make sure she was good and ready. In that same patch Imani joins the roster, a new siege map flavored in her art style also opens up. A unique feature of this map is that instead of being symmetrical visually, each side will have a different look. One will be the warder temple while the other is a warder temple taken over by the forest.

After Imani, new champions will drop every two months, with one exception of a three-month wait near the fall. Of these, Cantatore said that two were projected as frontline champions. This is important as the team believes a better variety of frontline fighters is healthier for competition. “We have some cool ideas for front lines so we hope players like them when they come out,” he shared. Then he teased the next champion, another frontliner, that is already under development. This guy is, in Cantatore’s words, “A more traditional gun-driven character that maybe echoes a little bit more with shooter fans, but at the same time has some really cool new abilities that we’ve never seen before.” He further described it saying, “I think it’s going to be a good shooting experience, with some abilities you are maybe more used to seeing in a MOBA or MMO than a shooter game.”

With the apparent focus on fantasy in this next update and beyond, you might wonder why the upcoming champion is back to guns. That’s very purposeful. Cantatore elaborated:

“To play a shooter, you need to have that shooting experience. Especially as a transition thing for players that come from other shooters, right? You need to give people something to play to start to learn what the game is all about, and start to see the fantasy as they play against other characters, and then maybe they’d like to branch out. “

But fantasy really is the thing, at least story-wise. And Paladins is more about the story now; it’s one way the shooter is really branching out. Cantatore admitted to always pushing for more lore as well, but it was such a change of pace for the company whose experience was SMITE with its built-in lore. “We were trying to do a fantasy game without much fantasy behind it other than the setting and the characters,” he said. All the other devs expressed how surprised they were at the community’s response to the first one-off lore event. Paladins fans wanted more! They wanted to know what happened in the story. Devs, who hadn’t planned that initially, have now made a point to not just incorporate story into the game but to interweave the entirety of the year’s updates with it. As Cantatore said, “Seeing the response to that, it’s been great. And it really helped us set a direction for the year to come.”

So one of the biggest changes players will see over the course of this year is the thematic tie of all the updates. And the game will evolve as the story progresses. The monthly releases were likened unto a comic book series. Cantatore continued, “We have this really cool story, I think, that evolves over the year, and every month there is a character or there is a map or there’s something that continues the story and you can play part of the story.”

You asked for it…

What player requested features will be making an appearance this next year? How would you like some clans? And now let’s throw in clan warfare. In-game tournaments will also be a real thing! Persistent lobbies are in the works. New game modes are on the docket as well, as is a revamped items store. We don’t have a ton of details of many of these, but they are in the works and all slated to come into the game during 2019.

A word on Cards Unbound

Before closing, I want to take a moment and broach the Cards Unbound debacle. After all the panels, interviews, and discussions with devs, it was quite apparent that most of the staff were no more fans of that experiment than players were, and they said as much. In fact, they actively campaigned against it! There was definite disagreement between devs and management on this and monetization strategy both (which really comes into play because of the difference in cultures that the Paladins fan base represents). But something had to be tried, and management went one direction. Thank goodness you can backpedal!

The panel discussed how the idea behind Cards Unbound was to increase player engagement (people in earning cards) and helping monetization (people buying cards). As we all know, none of that was well received, and staff and devs were just as happy as players to toss that failed experiment out, giving Paladins its identity back. The community managers reported that through this all, the very vocal and passionate fan base stuck with the game. General Manager Chris Larson noted that when he moved into that position right after this debacle, he was asked by Chisam to take what he learned from SMITE and apply it to Paladins. I think everyone can be happy that skins took over much of the monetization instead of cards. Cantatore also noted how players were understanding after devs went on stream to explain why voice packs were now monetized.