Yes, it’s back, the day when you can believe absolutely nothing and MMO studios are cranking out faux patches that you kinda wish were real. Yeah, I might still be salty over the old World of Warcraft bard joke. We’ve already covered a few of the pranks from games that got started last week, including Guild Wars 2, World of Warships, Champions Online, and Crossout. Here are a few more.

Elder Scrolls Online might be taking the cat people thing too far, but we’re here for it. 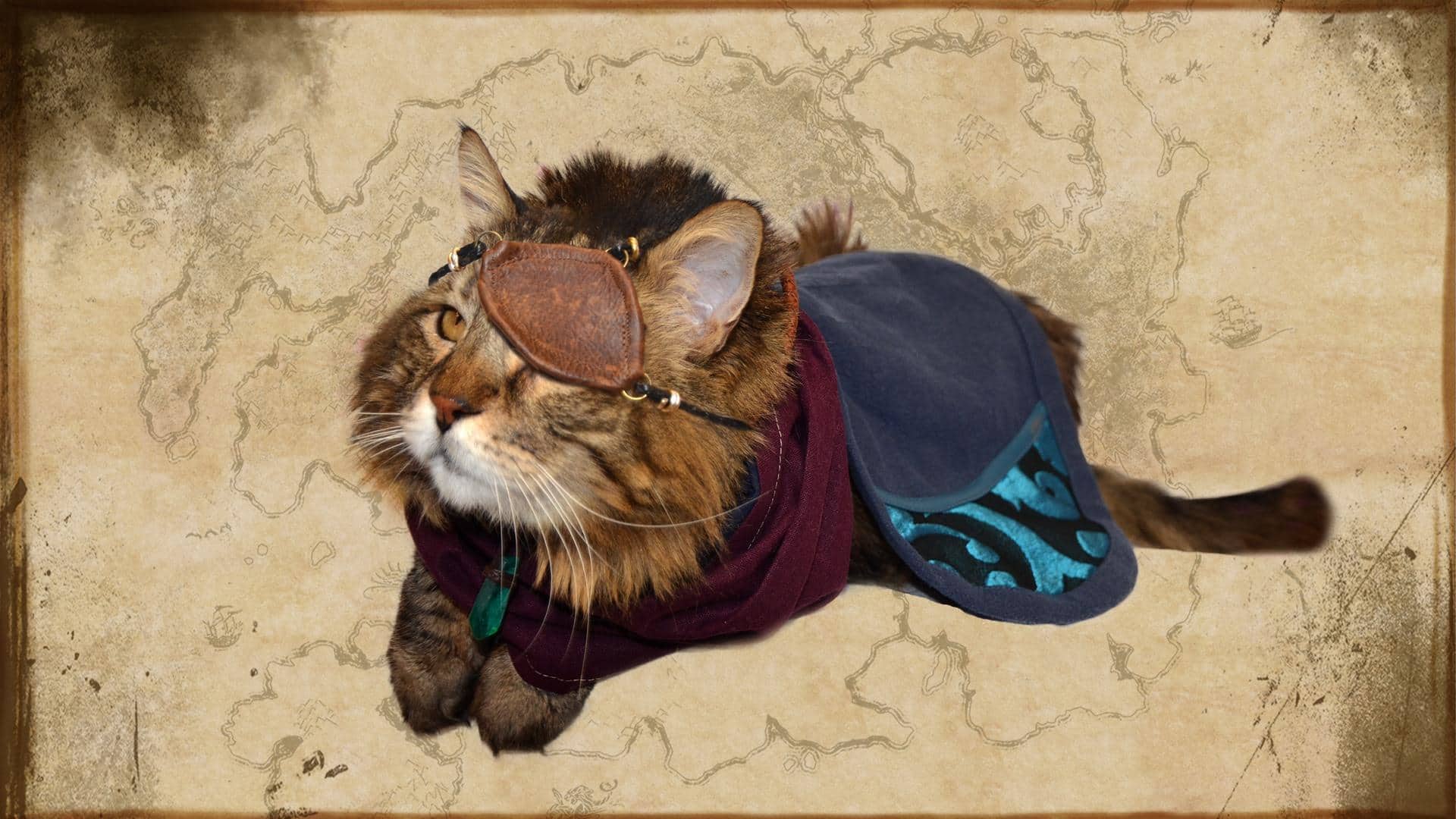 World of Warcraft’s requisite “patch notes” are up. (Blizzard usually has more than just patch notes, so stay tuned. At the moment, WoWHead’s “datamined” patch is better.

Final Fantasy XIV has introduced a new smart home assistant from hell and a FFXIV manga.

War Thunder has gone Earth Thunder for the week.

“Gaijin Entertainment invites everyone to take part in EARTH THUNDER, an intergalactic tournament about to begin right now. The tournament sees talented cyber-athletes from all corners of the universe take control over one of the galaxy’s less advanced civilizations, forcing them to man the Universal Fighting Orbiter and to fight until death for the galaxy’s amusement. For the next stage of the tournament, its alien organizers have chosen Earth – and from April 1 until April 5, the flooded city of Green Hills will turn unto the fiercest battlefield of human history.” 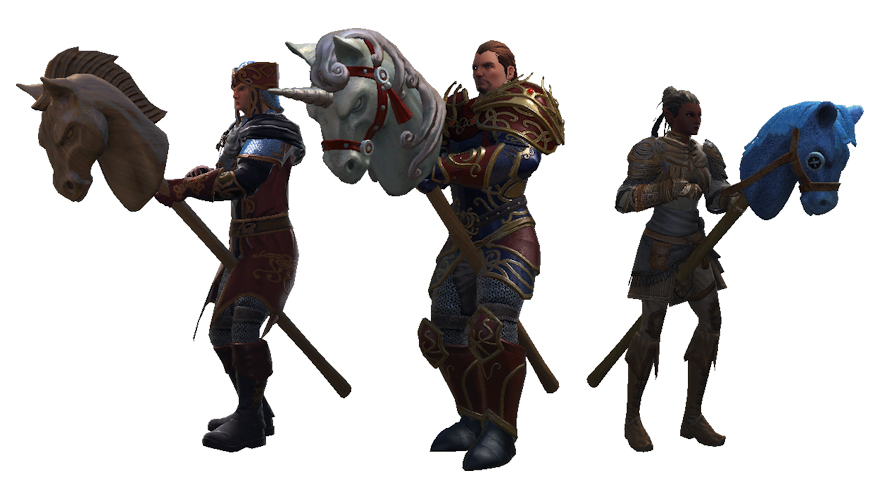 Something tells us that Neverwinter is horsing around.

“Well, Lukan’s a neigh-sayer, and he’s ready to knock Halaster off his high horse and show all of Neverwinter who is really the maddest around! Some may think it’s a foal’s errand to challenge a mage like Halaster, but Lukan is willing to make a foal of himself to prove that he’s no one-trick pony. But we’ll stop stalling and get to the mane event! In a spur of the moment decision, Lukan has cast a spell on all the mounts in Neverwinter. And we mean all the mounts! Not just the mare mounts, but the whirlwinds and the constructs mounts too.” 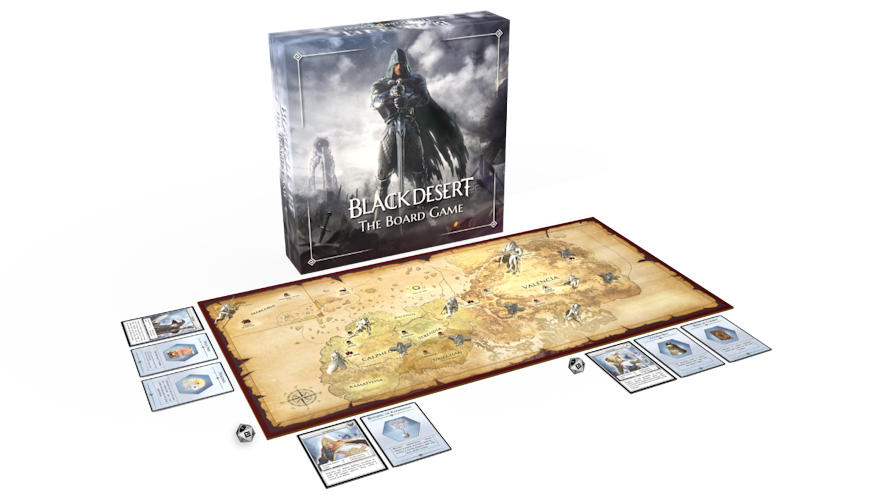 If you thought Funcom has a few too many Conan games cooking, you won’t like this one: It’s Conan Chop Chop! Which, again, I would play on my phone if it were real.

Prosperous Universe has an “honest trailer.”

This week we have absolutely nothing to show you… April Fools!

We’ve actually been working really hard and we’ve got a tasty selection of changes to talk about: https://t.co/HI0W9gbmhs

EverQuest II is celebrating with the return of Bristlebane Day, “a holiday that honors the Grand Prankster Fizzlethorpe Bristlebane who puts having fun first.” It runs until the 11th, so you’ve got no rush. Even time-locked expansion server players can get in on the fun and the new quest.

It's no joke – Bristlebane Day has returned! Pranks, laughs, and a squeaky cockatrice are headed your way for the highest of silly days! 🐔

“Let’s see how good you are at overriding your muscle memory! For 24 hours, starting at midnight UTC on April 1st, the O-X Quiz is being run with a very minor change: You have to select the wrong answer. Get it ri- wrong and earn double the Kay Coins with each win!”

Guild Wars 2 influencer Jessym has an epic art piece for a game that we would totally play if it were real: an expansion for the side-scrolling Rytlock’s Critter Rampage.

That’s in addition to the return of Super Adventure Box, of course, and the fake patch notes.

How about a SWTOR/Anthem crossover?

League of Legends… well. It was always about the skins.

Revelation Online has been taken over by Brother Rabbit (what did I just type?): 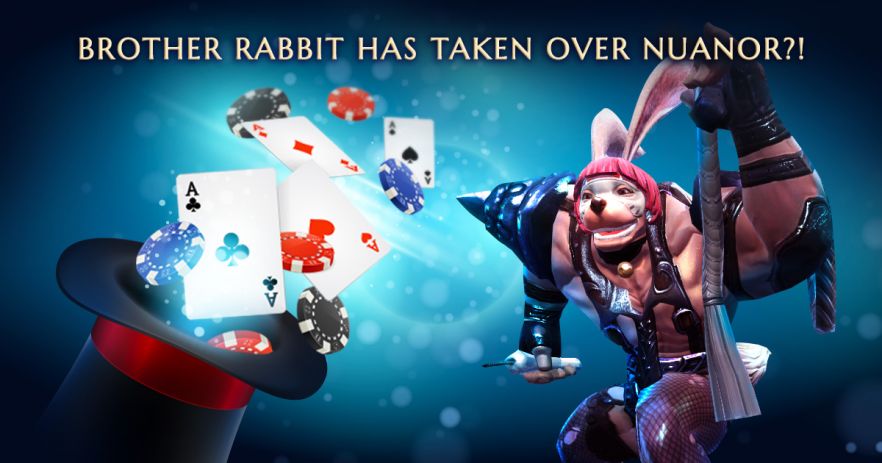 OK, this one genuinely made me laugh: Cuisine Royale is making players hunt for not just weapons and armor but body parts so you can Frankenstein your own toon. “But there’s no need to worry, as you won’t start out being nothing more than a torso (in fact, you lack that, too),” the devs vow. “The mannequin you are joining the battle with does have some human resemblance, but you won’t be able to make the most out of the items you find before constructing yourself in true Frankensteinian manner. Without a proper head, for example, you won’t be able to eat, giving you no chance to replenish lost health. And while your weak mannequin hands may be able to hold a light weapon, you won’t be able to haul yourself over walls and obstacles without a proper set of biceps.” 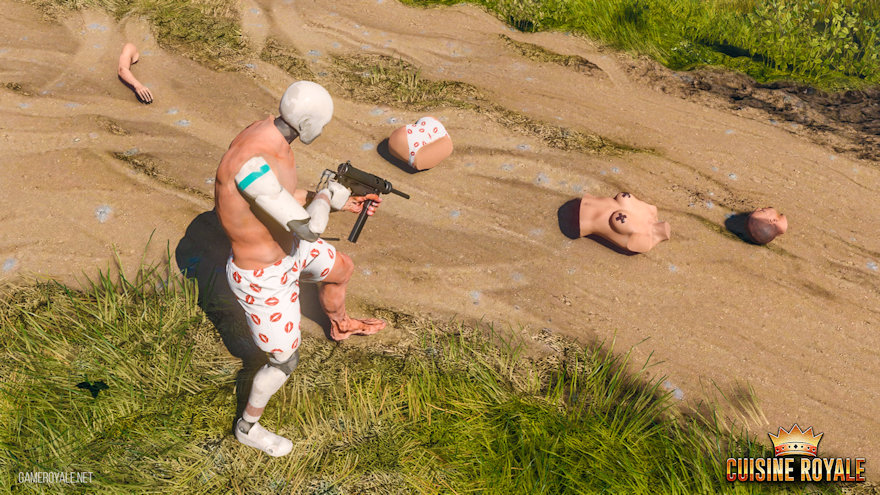 It’s such fun! The free mask will have you perfectly geared for pulling some pranks on your friends for April Fools. Will anyone recognize you?

Grab your mask between 1st April at 11 AM and 2nd April at 11 AM CEST from the ingame shop and put it on right away!#AprilsFool pic.twitter.com/L5DnMaUGfw

Even Star Wars Galaxies Legends has an April Fools’ event this year:

Dr.Fool is back! He is at it once more and causing chaos across the entire galaxy! More details within the link below: https://t.co/4tWX84Omzi* #SWGLegends #StarWarsGalaxies pic.twitter.com/qHDmL2fyEW

And don’t miss the World of Warships and Crossout jokes from last week! They’re not just jokes; they’re actual modes.

On a more serious note, /r/games decided to go the other way today and shut down for a day. That’s not a joke. The mods compiled an album of the worst “transphobia, homophobia, islamophobia, racism, misogyny, pro-pedophilia/pro-rape, and vitriolic personal attacks” they’ve seen on the sub by way of asking gamers to do and be better. Hear, hear.

As for us, well, you’ve seen the first part, with more tucked away for eagle-eyed readers over the course of the day. And a gold star for those of you who found MJ’s secret stream calendar joke!

We’ll be updating this post throughout the day as we spy more – feel free to leave them in the comments too!

Champions Online: Noir is the “dark and gritty update to Champions you’ve been longing for.”

It's been a looong time coming, but we're finally ready to REVEAL our next big project: ATLAS CARDS, a @WorldsAdrift collectable card game!!

Check out the official pitch below…

EVE Online’s getting new pirate implant sets. Why not.

We're happy to announce the proposed details of 72 new pirate implants coming your way this summer! https://t.co/CCuBYmivIj Let us know what you think in the forum thread. #tweetfleet #eveonline

Saga of Lucimia is moving to be a full loot PvP MMO with a cash shop. No, not really.

With the pre-order store now closed as of March 31st, and our transition to Stage Two and Alpha complete, it's time to announce our move to PVP with full looting rights + a cash shop to boot. https://t.co/1Fj53sceRd#sagaoflucimia #mmorpg #gaming #indiegamedev #indiegame pic.twitter.com/DQMwXwvdzZ 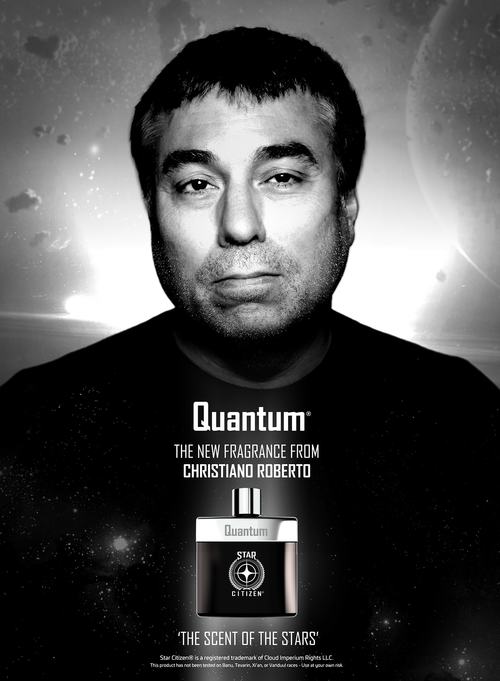 City of Titans has a new look for its character creator. 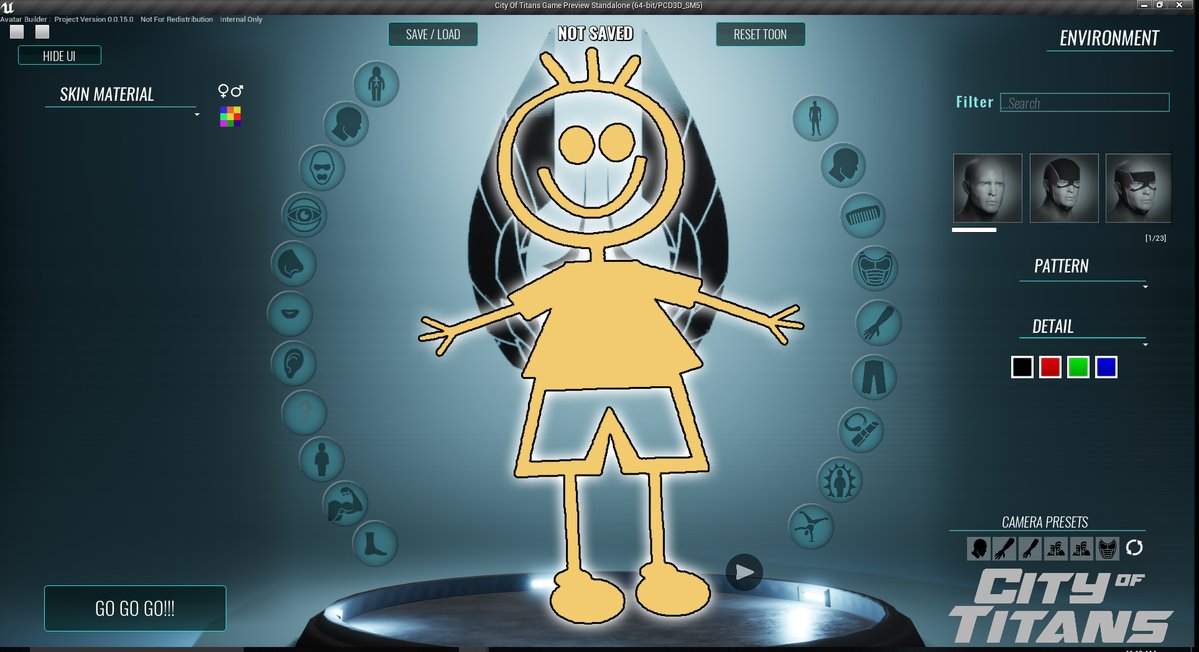 Path of Exile and Warframe have joined forces for an epic collab, Path of Warframe (with two of the best studios in this industry!). Can we have this? 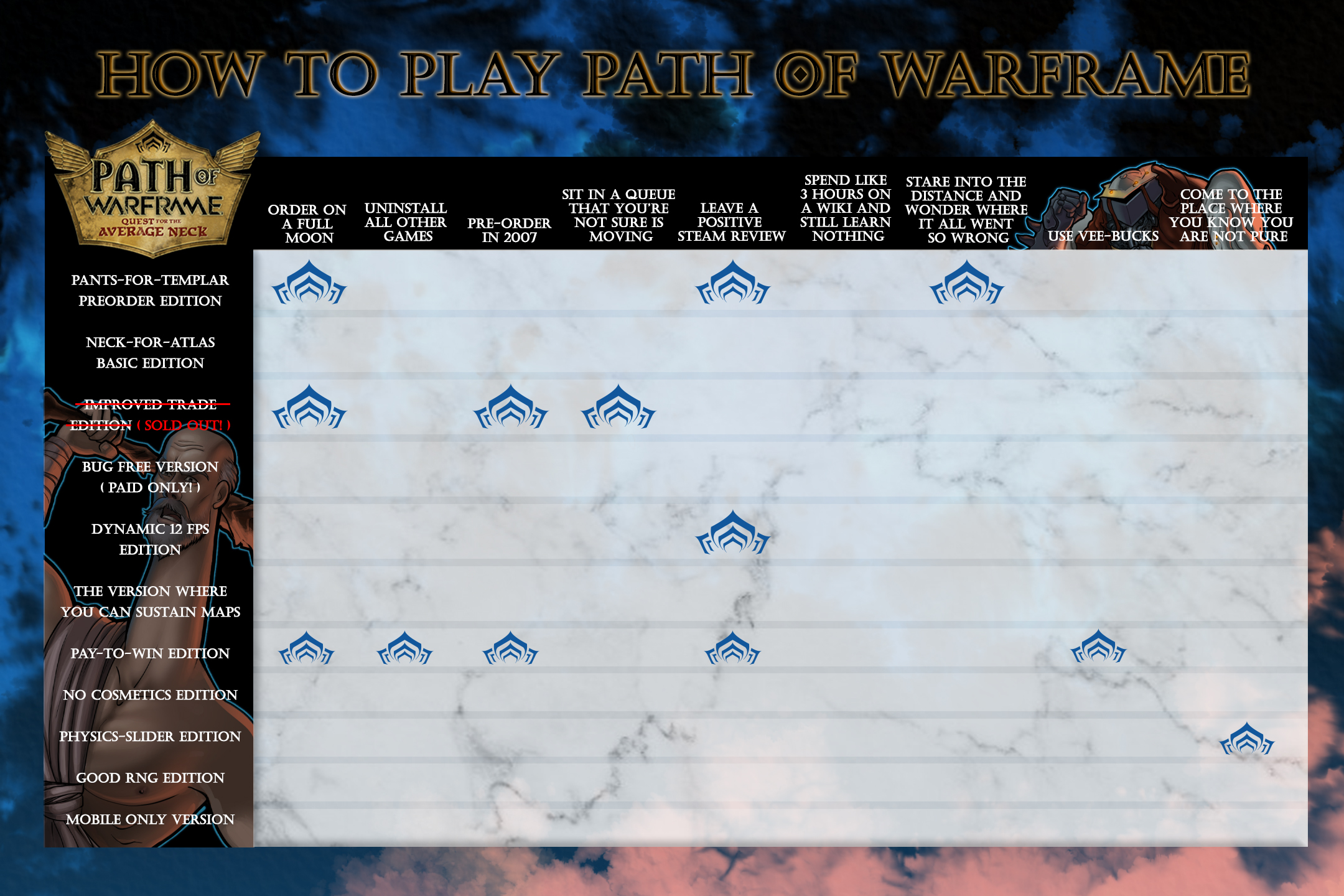 Star Trek Online back for another bite.

We're so proud to announce the next step in our ongorning journey: Star Trek Online: Gorn of Discovery.https://t.co/71E570jT0f pic.twitter.com/DSFnUYInJq

Very serious gear has arrived in the Depot – Kazoo Horns, Failsauce Horns, and The Schnoz are now available for only the most serious of soldiers.

Sadly I think that one is real and not a joke.

And you mean I can’t get those kitty outfits from Elder Scrolls Online for real? Awww….

I was just thinking that it seemed to fit so well with their business that… it might just be real.

I love this bit from the Path of Warframe announcement:

i log on games to yell at my pals and annoy ppl, not PLAY; huff

Do note the balance update, in particular “The Drake Herald’s internal computer core has been replaced with a traveling oven capable of keeping pizzas hot and fresh in the deepest space (except stuffed crust, which gets weird when you reheat

I liked the Path of Warframe (it’s rare that two companies collaborate like that), Conan Chop Chop, and Quantum from Christiano Roberto.

I was really enjoying CrossOut until the grind set in.

Champions Online getting a update is the real joke.

The FFXIV one killed me at the ‘play romantic music’ part, even though I knew what was coming.

Grinding Gear Games is elated to announce that we've partnered with the @PlayWarframe team to bring you the most ambitious of all crossovers, Path of Warframe: The Quest for the Average Neck. Naturally, it's free to play but will somehow steal your wallethttps://t.co/Zl4TMDJYQG pic.twitter.com/swiFvxkm6w

An Anthem-SWTOR cross over? Heh. Hit’s to close to home. Holy sheezus. And don’t put it past EA/Bioware either.

Best to keep such thoughts locked away before the devs think it is a request.