Do you ever get that feeling that you spend all of this energy and time in MMOs trying to get to the next zone or planet, and then when you do arrive, the first impulse is to get to the one after that? We’re all tourists — or in Michael’s case, an intergalactic tourist of the highest calibur.

“Here’s a screenshot of my Imperial Agent playthrough in Star Wars: The Old Republic that I completed last Sunday,” he said. As far as we know, he’s still wandering around that desolate wasteland, looking for the nearest Starbucks vendor so that he can be refreshed with a mint double chocolate frappie. Venti, of course. 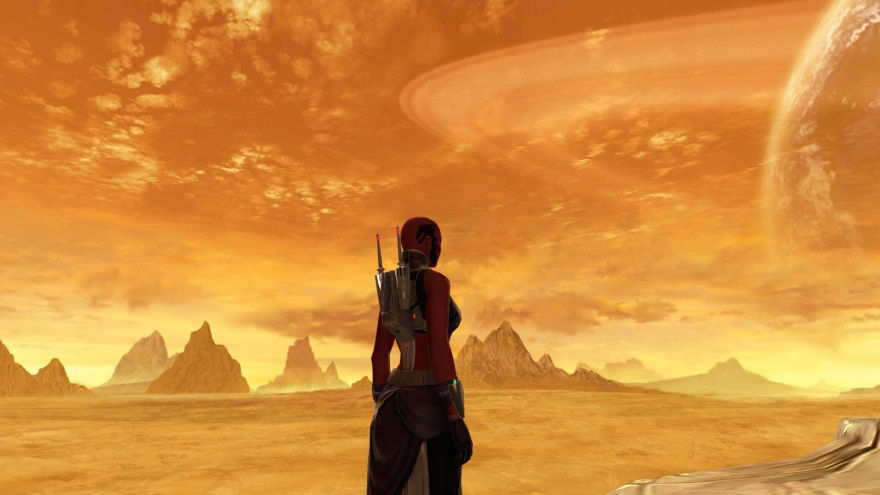 If there ever was a game made for grouping, City of Heroes is it. With its resurrection this year, plenty of new and old players are having a blast combining their powers to make… well, a dizzying light and sound show that will make your dog fall over, dead, if it looks at your screen.

“My favorite group is always going to be our Cabal/Guild/Supergroup of 2,” said Hikari, “When House of Light made it’s shining way to City of Heroes again for the first time, it did not disappoint. (And yes that is a Peacebringer, Eliot.).” 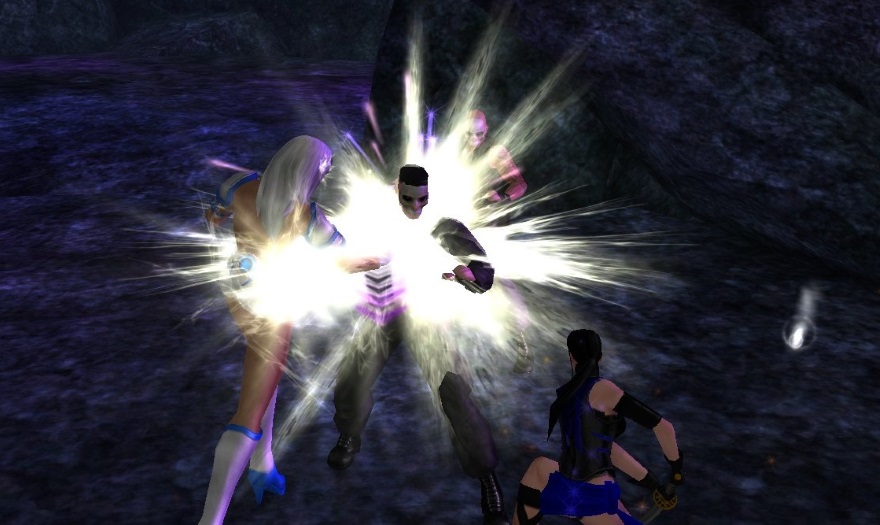 You may not realize it these days, but World of Warcraft offers a version that isn’t the Classic beta! In fact, Utakata can be found there with her Gobbo having all sorts of adventures. And apparently she’s watched over by the world’s ugliest Cupid. 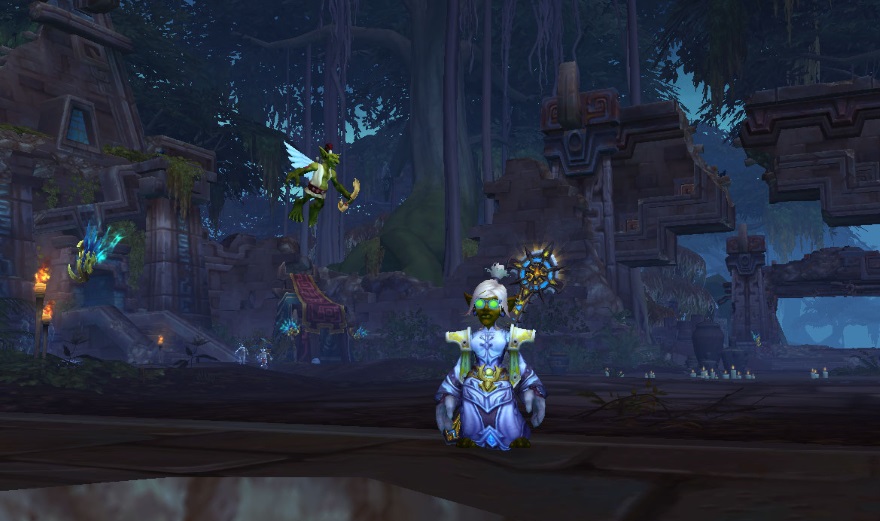 So. Hurbster. My friend. I know you’re having great fun in RIFT playing your little recorder and recalling your glory days of third grade music class, but dude, that lava flow is about to overtake you. In about two minutes, you’re going to be melted down into a non-Hurbster-shaped lump of coal and musical talent, and the world will forever be deprived of your gift. So maybe move a few paces to the left while you play Hot Cross Buns? 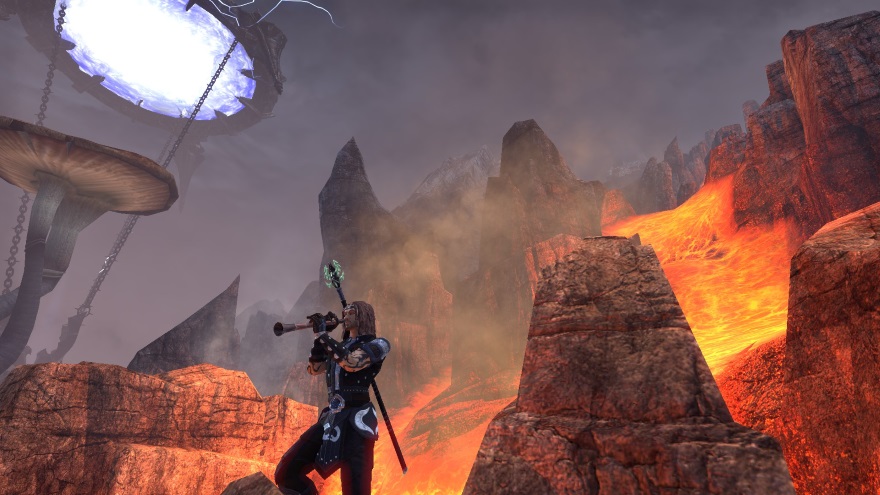 And hey, Rafael is back, and he’s actually expanded his horizons to include Black Desert! Lookin’ fine there, Raf!

“This is Yolie, my Archer,” Rafael posted. “I love this pic because of its simplicity. You don’t need to do anything to make caps look great in Black Desert.” 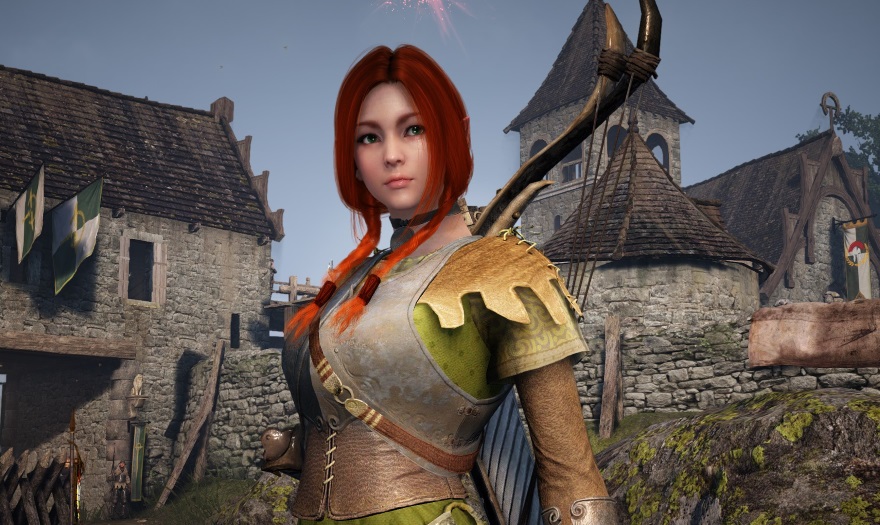 Go ahead and post your favorite in-game pics from the past week or so in the comments, but if you need a special screenshot challenge, then I dare you to share a picture that turned out far better than you had expected it to when you took it!

I was up at 2am local time to catch the first wave of Shadowbringers in FFXIV. I’ve been having a blast and made sure to take some time for my Warrior of Darkness to soak in the beauty.

Pondering the elephant in the room Conan Exiles style and, to stay on topic, an intergalactic tourist shot from Empyrion: Galactic Survival.

After inadvertently involving myself in one of Eliot’s columns (involving representation and inclusivity), I apologised, and promised to take a leave from MOP. I was quite simply not qualified to comment, didn’t completely understand, didn’t convey my point (if there was one) well at all, and was embarrassed. That was six months ago. And so I reckon I’ll just stick to One Shots and WRUP, like I used to ordinarily (and hope everyone has forgotten).

I’ve been enjoying Neverwinter quite a lot recently. I realise the Undermountain expansion has been a bit controversial, but there are at least as many good changes as the stuff people are fussed about.

Regardless, the game seems very heavily populated. Dungeon queues are short, my guild is very active and friendly, and there’s a good deal of fun to be had. This screenshot was taken in one of the new zones (Wyllowwood), a heavily forested vast underground cavern, complete with the illusion of sky. Lovely colour palette.

My level 80 (max) Rogue has some pretty good gear, but I’ve chosen to reskin some of the outrageous looking high level outfitting with a more conventional level 20-ish set. It’s cleaner, and more…well…appropriate. It also better matches the new Mountaineer Dagger and Stiletto, which are properly pointy, without being overly elaborate.

I hope everyone is having a lovely summer in the northern hemisphere, while some of us down here are suddenly a bit worried about New Zealand’s chances in the Cricket World Cup.

I wish more people had the grace to be embarrassed. You’re all good here Rees. :D

Indeed. There’s no need to self-exile, Rees. We all have a post or fifty that we wish we could retract. :-)

Your presence here is most welcome, and I hope to see more of it.

I may never understand the arcane mysteries of cricket, but I appreciate that you explain it to me as if I could. :-)

Not a screenshot, and not mine, but I wanted to share it anyway.

So it isn’t all River Dance steps you learn? o.O

Simply enjoying the return of the Dragon Bash festivities after 6 long years in chilly Hoelbrak! ^^

Bonus: How many dragon heads do you count on this shot? ;P

Still trying to offer some “change of pace” pics to The Justin Show. They can’t all be Star Trek Online. :-)

Here are some pics from Fortnite: Save The World (The PvE co-op version of the game).

Apologies for the UI, but if there’s a simple way to remove it from screenshots on the PS4, I haven’t found it.

My current main is a retro science-fiction space captain (hmmm …); an actress who used to star in a popular space TV show. I wonder where Fortnite got that idea???

A very fun, and funny, game.

How about the scene turned out far better than the content is was taken in? o.O

“Err…what’s are those blue condom thingies doing stuck over your heads, Uta?”

Oh…we had to wear those so the locals don’t eat our faces while hanging out there. I think they’re some sorta living cephalopod. >.<

I remember having some sort of similar squid-thing on my head when I played the undersea zone stuff in World of Warcraft. I guess it’s a fashion statement in the underwater world? :-)

Well this zone is sans-underwater. Meaning it was all under water until they released the patch last Tuesday for it. o.O

PS: Oh…I just realized a pic of mine did get posted for this week’s One Shots. Thanks Mr. Justin! <3

Here are 2 shots that turned out better than I thought from AIR.

I knew something cool was about to happen, but I was not sure how it was going to play out. I hovered my finger over the screenshot button hoping to hit a good timing right before some impending big booms blinded me.

Not knowing the game in question, I took I took your pics here as a sequence:

1) Hooded Hero: “Hmmm. A strange mechanical circle thing. I wonder what happens if I press these runes on it?” *CLICK*

Hope you found all the bits of your character afterward for the resurrection spell! :-)

That is my char in the pic. No real bow character available, only guns, so I had to play assassin.

You left out the part about for being yanked back & forth in time by a bunny that lives in a hollowed out tree trunk in the middle of a psychedelic space room. Not sure what # that is cause….ya know….time travel and stuff.