Eager players packed the Washington State Convention Center at this year’s PAX West, each greeted with games ranging from high-profile triple-A titles to more humble, two-person projects. There was something for everyone. And while companies like Square-Enix drew massive crowds with foam swords and “I beat Titania” shirts, smaller companies set up shop on in booths tucked away from those much larger games. I’ve learned not to discount those teams and the games they make. The passion these developers pour into these games can be seen in every little thing they add.

One such game blessed with a passionate team was Destiny’s Sword. It’s a sci-fi tactical MMO in the vein of X-Com, but with a focus relationship building and dealing with the effects of prolonged exposure to trauma. I initially knew very little about this game, aside from what Eliot wrote about when he played it at PAX East 2019 earlier this year. But there was something very personal about this game to me, as it deals in such a realistic way with trauma and people’s mental state. I could go on for hours about trauma: It’s actually a topic I spent a ton of time studying this year. 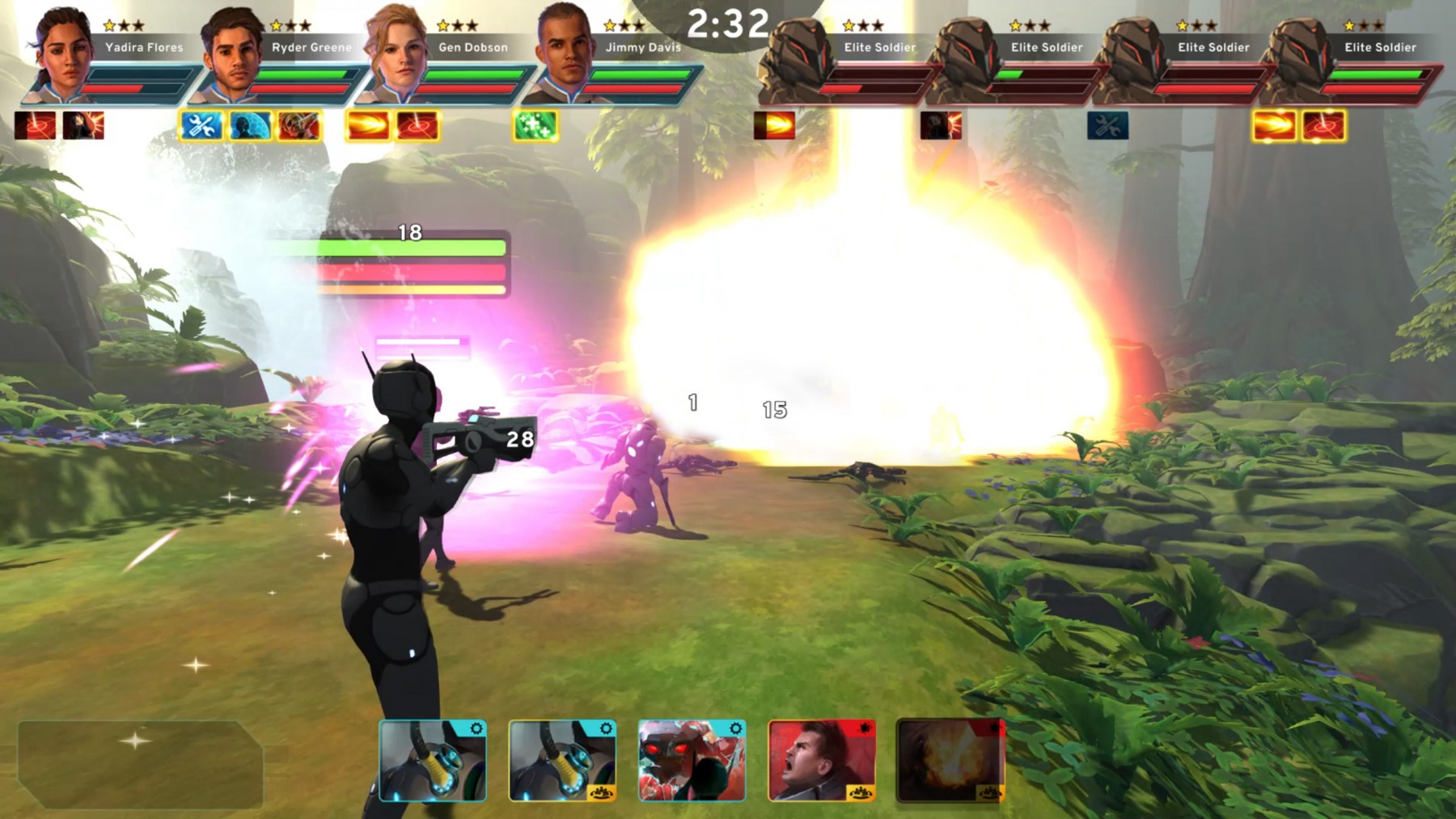 I had a blast playing the pre-alpha. None of the characters was animated, and this stage of the game still uses generic models and early effects, but the gameplay itself is fun and engaging. Imagine your squad as a party you build, and you get to cast each individual’s special abilities to handle the different situations and mechanics that arise in combat. It had that very familiar MMO feel that I enjoy. It was all in real time too, so timing the right attack at the right time was essential.

Even more intriguing was what happened after the fight. I lost my first bout with the enemy, and some of my troops sustained injuries. 2Dogs Games’ Ken Hall showed me how to cure the person during my playthrough at PAX. At first, I thought I knew what I had to do; I simply thought I had to keep clicking on a portrait until the health bar filled up.

But it was much more than that. I had to assign another person from my roster of troops to help the soldier recuperate. Hall explained to me that doing this builds relationships between the characters, which is key in maintaining the morale of the troops and victory. So now, the relationship goes multiple ways: the player’s relationship to the character and the relationship characters forge with each other. It’s kind of like Fire Emblem, though the dialogue was less anime-fueled.

As a sat down with Hall after my demo to pick his brain, the first question I had was what inspired him and his team to create this unusual MMO in the first place. As it turns out, it was research with military veterans generated in his past games.

“We did a lot of with veterans in some of our previous titles. I did B-17, which is a historical flight sim, and we really found that the games only really dealt with the few seconds that fellas pulled the trigger during combat, not how they made a life in theater over the past five years or how they got back got back on the aircraft day in and day out when their friends were getting injured, and we really felt that we wanted to make a game that had a deeper level of understanding and an idea of some of the long term consequences of being in conflict. But it also provided a great opportunity for us to raise awareness of mental health in general and provide our players with strategies for communicating with people that are suffering from mental health issues and to help them encourage people that matter to them to seek treatment and to destigmatize having mental health issues and seeking treatment.”

He added that one of the top priorities for this game was building a strong sense of community. “One of the biggest things for us with the game is creating a sense of community, really giving players the idea that when we work together we achieve far more than working individually,” he told me. “So all the mechanics are designed to reward cooperation and collaboration and to make it much easier to succeed when we work together.”

Since we are an MMO website, I wanted to know his vision for the community on launch and beyond. “Hopefully it’ll continue to get excited and continue to grow,” he replied. “We’re aiming for a more mature audience. We’re aiming for the 35-45 year old gender balanced 50/50 male female as a target audience. They’re going to be more interested in a more sedate experience. It’s not that classic twitch-action game; it’s not how fast you can hit the buttons. It’s more a thinking game about how well you can know your characters and understand how you can help them succeed.”

He also mentioned how stories going on between characters will extend beyond just the player’s own soldiers to soldiers from other players in the greater multiplayer space.

“Really, the game itself has so many levels of interactions. So if we go into some of the social functions on the support ship like the parties and the funerals, not only do players interact during those events, but our characters will interact and bring us into their stories. We might have a character who loses a watch at a party and says “I lost my watch.” [Players will have to ask others] ‘did anybody have a character that found a watch?’ Somebody does, and it’ll start a dialogue between players and their characters.”

He also pointed out to me that there are more collaborative events during combat, so the way players play the game will have an impact on the game world. If players do too much damage to the environment during combat, then it will affect the rest of the world, and all the other players will have to deal with the ramifications.

There’s so much to this game already, and I was impressed by the depth of the dialogue in this game. If you’re interested in these narrative-driven multiplayer games, I highly suggest giving this game a shot. They’re shooting for early access in March 2020, so if this all sounds intriguing for you, don’t hesitate to dive in!

Massively Overpowered was on the ground in Seattle for PAX West 2019, bringing you expert MMO coverage on everything (and everyone!) on display at the latest Penny Arcade Expo!
Advertisement

The Daily Grind: What’s the most heroic moment you’ve seen in...