At BlizzCon today, the World of Warcraft team beat loud and often on the drum of choice during the Shadowlands panel, promising that players will have a greater leeway in compelling choices for their game experience. This won’t just happen with the new expansion, Shadowlands, but will start from the very first moment in the game.

According to the team, leveling has been a sticking point of World of Warcraft’s overall experience. It said that feedback from players pointed to several key issues: Leveling took too long, wasn’t that rewarding, didn’t get players caught up with their friends, and missed out on important expansion stories as people out-leveled those zones. Another quirky issue was what the team called the “Warchief Shuffle” — creating a confusing timeline in which the warchief of the Horde (or other key figures) would change depending on various quests and game states that players would weave in and out of doing. 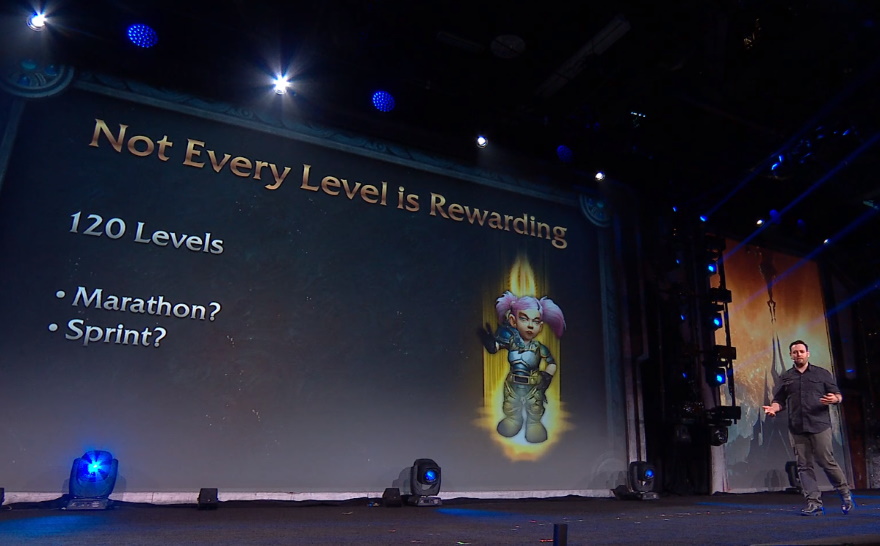 Ergo, World of Warcraft is streamlining the leveling process in one comprehensive swoop. It’s a foundational shift from how players have progressed through the game in the past and how they will when the expansion arrives next year.

First of all, the level squish is indeed happening. The new level cap, come Shadowlands, will be 60 (which was, perhaps not coincidentally, the original level cap of World of Warcraft vanilla). This means that all current level 120 players will wake up one day in the future at level 50, and those under 120 will have their level downsized accordingly. Blizzard was quick to mention that the power level will stay the same and that players shouldn’t feel reduced in any way other than that big number in the top left corner of the screen. 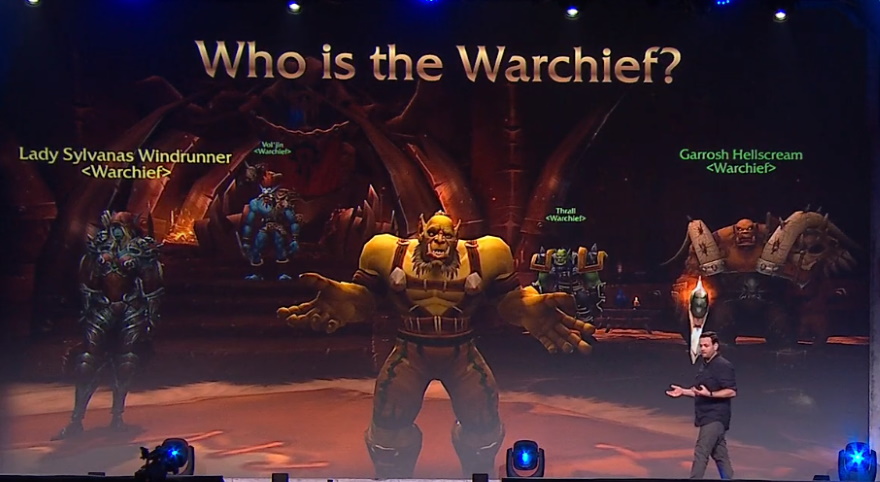 With the level squish, every level will reward a player with something, whether that be a talent choice, a new skill, or some other goody.

Along with the level squish, World of Warcraft’s leveling process will be more like a choose-your-own-adventure than ever before… at least for veteran players and their alts. For brand-new players, however, it’s more of a strict path. These fresh faces will start out in the new zone of Exile’s Reach, which Blizzard said was created to be an ideal introduction to the MMO with many elements — terrain, art, and monsters — that represented the game as a whole. Once new players reach level 10 and finish the zone, they’ll tackle a mini-dungeon with two bosses, visit their respective capital cities, and then be off to a one-two punch of Battle for Azeroth and Shadowlands for their 10-60 run. 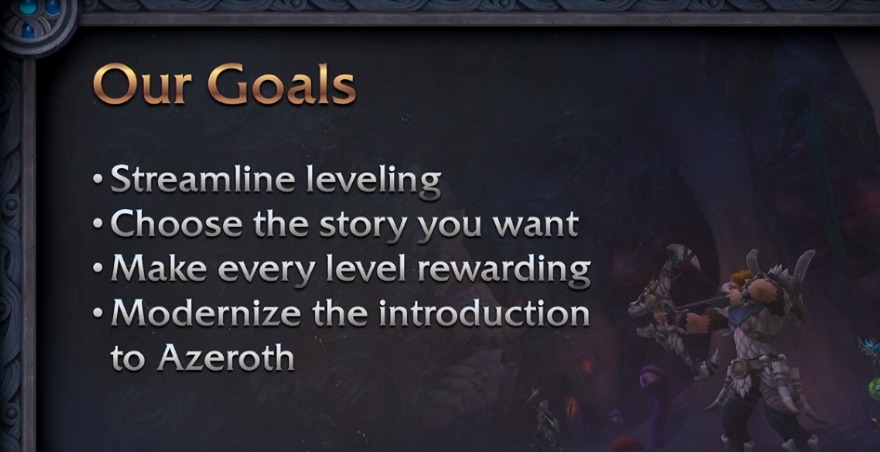 Why Battle for Azeroth for a first playthrough? The WoW team claims that there is power in “shared stories and events,” and as such, wants to bring these newbies through the latest expansion to bring them up to speed alongside of everyone else.

From your second character on, Blizzard has a greater choice of paths for leveling. Every alt chooses a beginner zone (including Exile’s Reach and all of the current ones), after which they’ll visit their capital city. There, they’ll connect with Chromie for a choice of expansion to experience from start to finish as their level 10 through 50 run. This is what the team calls “Chromie time” or “outdoor timewalking,” as players will get locked into a certain game state for this stretch. 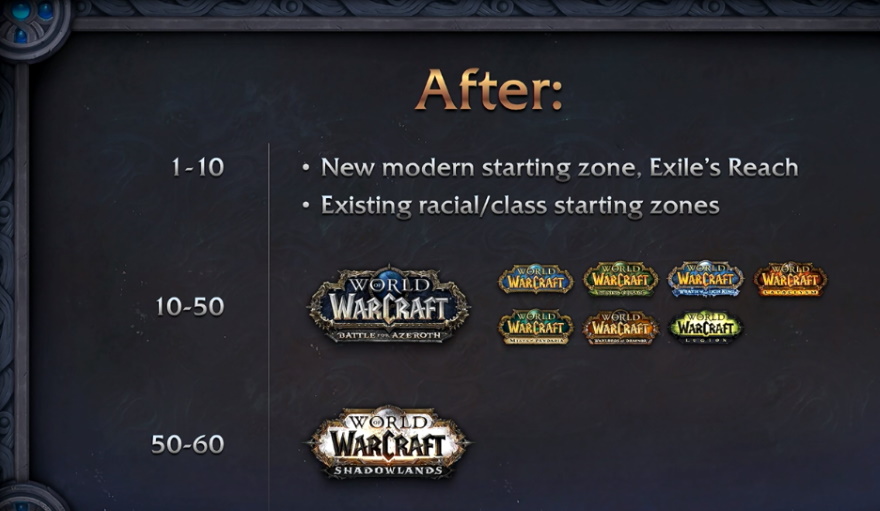 Blizzard isn’t going to stop you from doing what you want. If you don’t really care about doing a specific expansion, you will have the choice to roam the world and do whatever you like. And if you like outleveling dungeons and roflstomping them for transmog, you’ll still be able to do that next year. 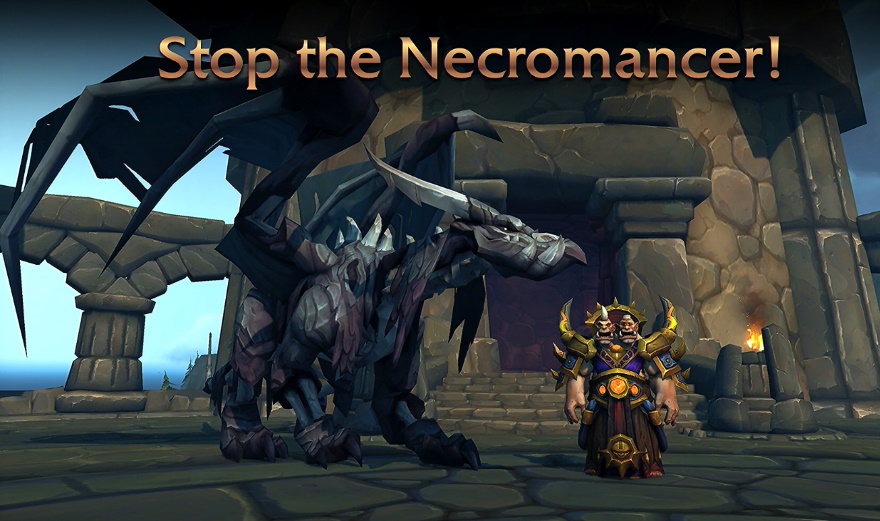 Whatever you choose, once you hit 50 you will enter Shadowlands and join with the rest of the crowd for the road to level 60. And all players, new and veteran, will benefit from a significantly faster leveling experience from 1 through 50 — “significantly” here meaning something like 60% to 70% faster than the current live game. 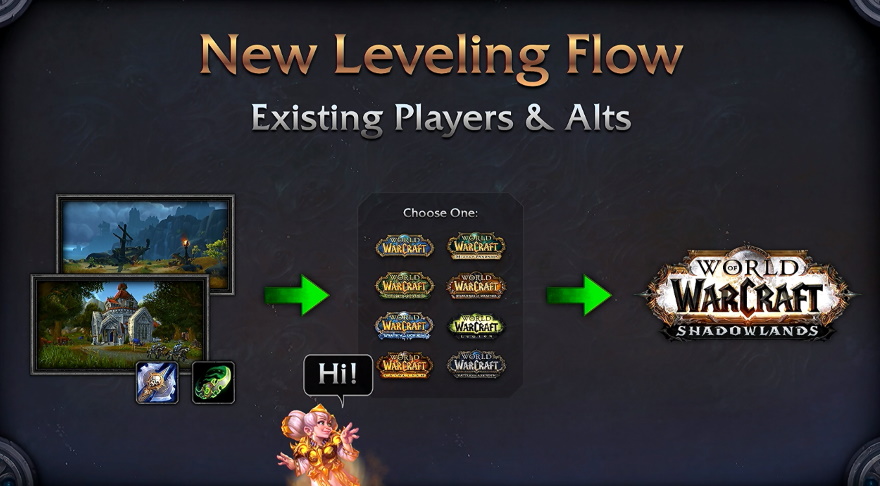 With more progression paths but a shorter road to get new characters and alts to the end, this streamlined World of Warcraft is a bold attempt to make everyone happy — or at least paying and playing the upcoming expansion as quickly as possible.