The other day I showed my kids our wedding video, and while we watched it I was reminded how much sheer work it took to get all of the elements in place for one day. Looking fabulous takes effort, money, and mountains of flowers, y’all.

“We initially started playing together in early 2015, and meant to do this much, much earlier… but didn’t get around to it until April of this year,” Bereman said. “I suppose a picture of my real-life wife becoming my in-game wife counts as a photo of someone striking other than myself?” 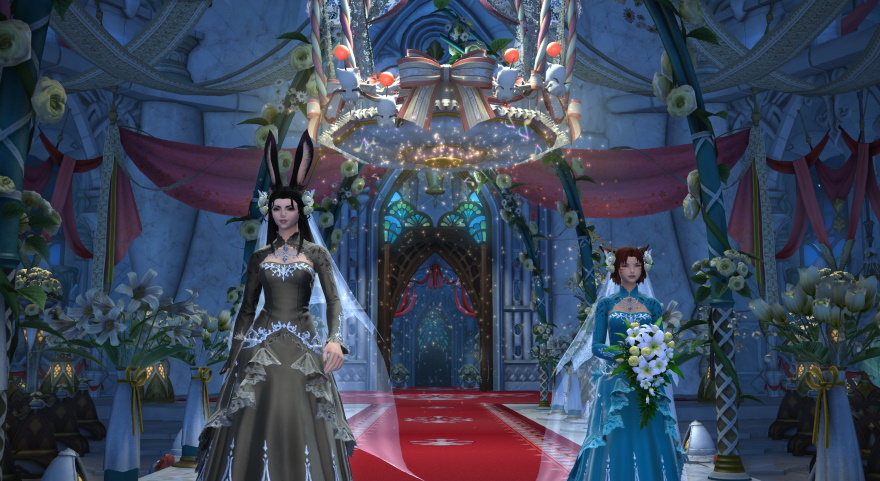 Redbook took me up on the challenge of trying to take a picture of (always moving) other players in Guild Wars 2.

“I really like the color scheme this person used for their avatar,” Redbook said. I can’t but help wonder if the bother of trying to fit clothes around wings and bumping into everything in hallways is worth looking like a grounded angel. 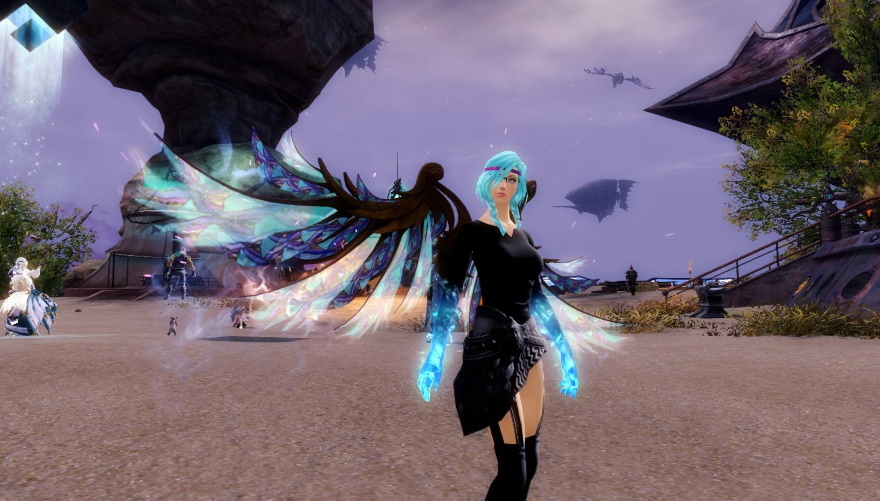 Hikari graced us with this party picture of the old Secret World right before Secret World Legends went online. We should probably put a disclaimer here that firing weapons inside of a crowded rave is not responsible, even if you can resurrect over and over again thanks to the magical bee juice that flows through your veins. 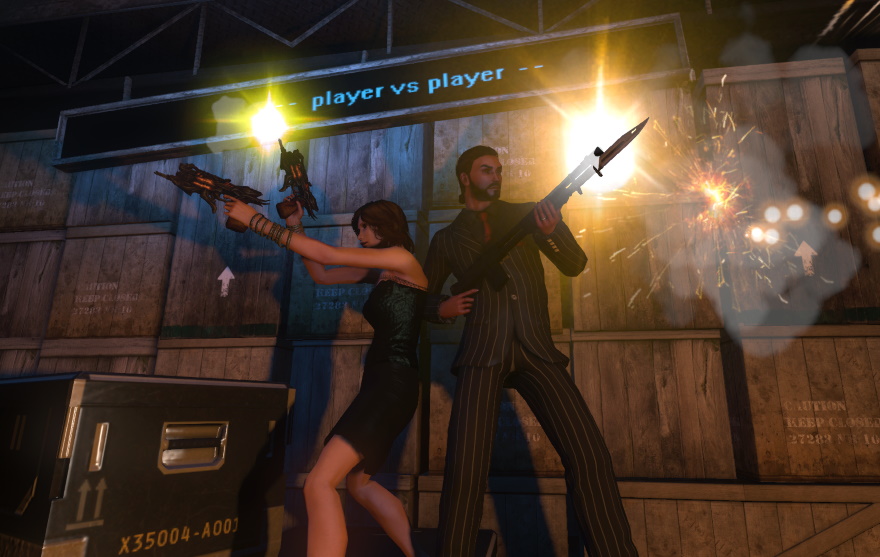 Minimalistway was arrested by the sight of an eight-bit raptor in Guild Wars 2, as one tends to be when the ridiculously impossible casually strolls by.

“The bear on the left is my pet Jeffery, he like to screen-bomb my screenshots!” said the observer. Can I just say that “Jeffery” is the best name for a bear pet ever? I love you, Jeffery! 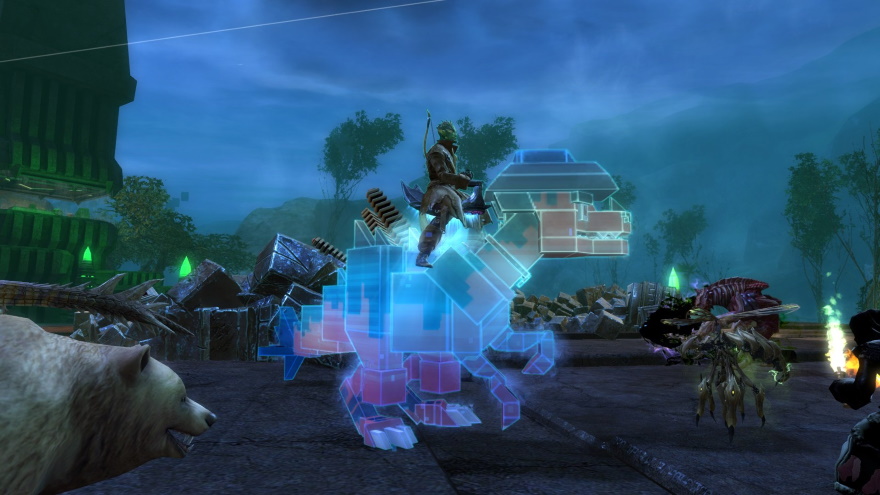 For our last shot, we have this magnificent view of Kugane in FFXIV, courtesy of our friend Vincent. He gave us this massive panoramic shot that I had to trim down, lest it be rendered a thin black stripe on your screen, but trust me, it was even more impressive than this.

You need a screenshot challenge? I’ve got your screenshot challenge right here: Show off a picture of a legendary-like weapon. Something that looks amazing, at least to your eyes. Big, small, your own, someone else’s, whatever — let’s see some artistic instruments of death and destruction.

Hmm not so much a legendary weapon as some weapons plus some bonus of my recent favorite screenshots.

My Asura Ranger got a more discreet look. I’m trying to make him look like a eastern tribal warrior, like a hun or a mongol but most of the good armor is Heavy Armor. The weapons are Faithful, a quite slick, utilitarian axe, and the Zenith Torch. I love the purple fire.

I’ve got a couple. The first is Woeborn, the new Dark Knight Relic weapon from Shadowbringers. The second it’s been glammed into Cronus, the Relic from Heavensward.

Ulthalesh, the artifact scythe wielded by affliction warlocks in Legion looks pretty neat. I wouldn’t mind if they expanded the concept a little further and have other weapons with similar design. It was something new instead of the flashy, hilariously huge jokes for weapons we usually get.

This bad boy is the Gunbreaker weapon aptly named (?) Wakasa Shin…in my eyes it is deemed legendary only because my retainer–being the diligent servant he is–decided to head back into Doma Castle after it was…ahem…liberated and acquire it. I’m sure he heroically faced down many Doman Hoplomachuses, Laquieriuses and Slashers just to get this prize of a weapon.

But he is quirky like that, the day before he brought me back the roof of a house. Go figure. :)

P.S. @Justin, thanks for the shout out this week.

Wow, that is great cap. You have a great eye Vincent. The framing of the eyes with the weapon is perfect.

Somehow my retainers get to the First and get gear from the Qitana Ravel. But mostly they help demolish Hingan-style houses and give me the spoils.

I finally got my Chinese Stealth Armor in Fallout 76. Not only does it protect me from the environs, especially radiation, but when I sneak I go right into stealth mode. And that is when it happens. I become a deadly legendary weapon.

Oh one more. How about a Plasma Gatling Gun? You want to see enemies erode away before your very eyes? That’s right, erode not melt. Try one of these beauties.

Sure it looks like a giant shuttlecock , but when it fires you know you aren’t playing badminton.

It’s not how fancy it looks…

…but the size of it that counts. o.O

She looks great. I bet she is a death dealer with that sword which is twice her height. Heh.

My epic last stand did not go well…

Heh. Been there. Oh man… so many times. LOL

Ya…bangin skills with absolutely no response and then realizing you and everyone around you may have already been dead for a bit.

Stare at the picture for 5 seconds and you could be looking at PvP in ESO in real-time. Not including random loading screens.

The PvP servers in ESO are absolutely shocking.

Hmmm, well, there is the literal sword of legends, Sohothin in GW2.

Flipping the script on charr stealing weapons from humans, the microphone warhorn is always fun.

Regardless of whether it’s legendary or not, it’s hard to argue with how a Mesmer wields giant swords twice their size.

And if you must dress for the occasion, be sure you have matching daggers at your side. It’s a major Fashion Wars 2 faux pas for your weapons to clash with your outfit.

And pay no attention to the Sylvari with the glowing eyes carrying the reforged Caladbolg… that couldn’t go horrifically sour twice, could it?

And just to clarify, that was a posed shot of former DJs Trevalin and Lia I took for The Secret Buzz magazine. Not the last party before the end.

Is Sohothin legendary or lootable? I’m highly sure there’s a visual model for it but i don’t think it’s the same sword.

I’m fairly certain that is from the story mission. So yes, actual Sohothin. Rytlock gives it to you.