Yesterday, Grinding Gear Games held a mini remote ExileCon of sorts to share the reveal of this month’s big new Path of Exile expansion with all players live. Managing Director Chris Wilson shared many details of the expansion during the livestream as well as highlighted the new Ritual league that will accompany it. Dubbed Echoes of the Atlas, this expansion focuses on enhancing end game play, including a rework of all Ascendancy classes and new play dedicated to maps of the Atlas.

END_OF_DOCUMENT_TOKEN_TO_BE_REPLACED
If you didn’t have the chance to catch the broadcast live, or haven’t been able to watch the recording, we’ve got the information here for you to peruse. Echoes of the Atlas and the Ritual league both launch on January 15th for the PC, and on January 20th for consoles.

Attention on the Atlas

As the name implies, Echoes of the Atlas is focused on the endgame content, the Atlas. And as with the expansions, it is a change to the entire game, not just a league. As players delve into the Atlas, they will encounter the new NPC The Envoy, who discloses that other entities have noticed the absence of the Elder. (Notice the use of plural there!) Echoes of the Atlas focuses on the first visitor to arrive: The Maven.

When players come across The Maven in a map’s boss arena, she will watch them fight. Upon success, she’ll give a beacon, allowing players to call her to watch fights in other maps in that region. At some point, she will invite players to her own realm where they will  fight fabricated incarnations of those bosses she witnessed all simultaneously (without any duplication of a boss). When players succeed in destroying the three, then the number of bosses increases until you reach 10. The invitations are quest items, except the 10-boss invitation that is tradeable. Of course, each challenge defeated results in new rewards, including new Atlas passive skill points, craftable watchstones, and The Maven’s Orb.

In addition to the Maven, this expansion adds eleven new types of maps to the Atlas, with environments created by level design teams working on Path of Exile 2. Four areas were highlighted in the content reveal. 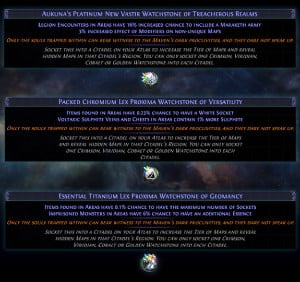 The Atlas gets passive skills

In a new twist, POE players get a brand-new skill tree that is earned in the Atlas itself. With points earned in The Maven’s challenges, players get to acquire up to 10 skills of the approximately 20 in each region’s special skill tree. These trees are tied to previous leagues and give special benefits for doing content related to that league. Here’s a peek at two regions and the branches in their trees:

A Maven and her orb

Something POE is definitely not lacking is currency. And this new expansion introduces another currency, The Maven’s Orb. Only available as a reward from the Maven herself, it allows players to craft influence modifiers when two or more are present on an item, by removing one modifier and upgrading another. When upgrading an influence modifier of the current highest tier, it upgrades to a new “elevated” tier that can have additional properties.

Echoes of the Atlas adds a third type of watchstone (item used to upgrade maps in the Atlas). In addition to non-tradeable quest ones and single-use unique ivory ones there will be craftable ones that do not expire and can be traded. Players can use these Titanium, Chromium, and Platinum watchstones to slowly replace their current base ones.

Items-wise, there are 10 new uniques in Echoes of the Atlas. We learned of Blackflame (a fire and chaos damage-themed amethyst ring that makes ignite turn to deal chaos damage), Hand of the Fervent (Zealot gloves that both adds a quarter of the skill’s mana cost as spell physical damage and damages the player for 150% of the skill’s mana cost over four seconds), and Legacy of Fury (Wyrmscale boots that place scorched ground during travel, applying the scorch ailment to enemies standing in it).

As for skills, the expansion adds the hydrosphere and trinity support skill gems. Hydrosphere is a huge ball of pulsing water that can have cold or lightning ailments added to it. Focused on builds with multiple elemental damage types, the trinity support gem supports the skill by building “resonance” with the other two elements that were not the element doing damage. When the resonance reaches a threshold, trinity grants elemental penetration.

The previous Harvest and most recent Heist leagues will be added to the core game, with a few tweaks. For Harvest, instead of finding a seed cache, players could just encounter a portal to an already established Sacred Grove, all bloomed and ready to reap. Another difference is that players will only be able to pick one of each pair of crafting options. Also, players can can save up to ten crafts for later use at the Horticrafting Station, which is now available in your hideout.

For this expansion, Heist contracts will drop only starting in Act Six. Differences from the league include rogues level up their skills faster, more markers drop, and quest contracts are now dropped at the next smuggler’s cache as soon as that quest is available. Additionally, all of Heist’s progress items are tradeable.

And the league is: Ritual

The upcoming league lets players participate in a ritual that summons monsters and rewards loot. It is aptly called Ritual. Here, players will come across mysterious alters as they play; destroying the monsters around each alter will summon forth an onslaught of monsters in a tight circle around the alter. Of course, the altar itself joins in to influence the battle. Each successive ritual summoning in an area will include the monsters from the previous ones, increasing the difficulty.

Upon defeat of a ritual, players will receive tribute points; these are spent on rewards for the league. Note: The tribute does not transfer between areas, so be sure to spend your tribute before you move on! However, if there is an expensive item you really want but can’t get yet, you can effectively put it on lay-away: spend some points now to defer it. This will make the item appear later in another area at a reduced cost. Players can defer multiple times.

At the endgame, players can collect Ritual vessels. These items allow players to itemize the monsters from their rituals. Up to four vessels can be placed in a map of the Atlas to increase the difficulty and the rewards of it. Additionally, these tradeable items (both before and after a monster is contained inside) can be used to substantially increase monster density in maxed-out maps that have mechanics like Beyond and Delirium present. Essentially the vessels give players control over the risk and reward of the hardest Ritual encounters.

As with all leagues, Ritual has some specific new goodies players can get. In Ritual, the items have a specific upside and an accompanying downside; the trick for players is to try and mitigate the downside and reap only the benefits of the upside. The items revealed in the livestream were Nexus Gloves (reduces mana pool but also refunds mana spent on a skill), Penitent Mask (applies the Crushed debuff to remove physical damage protection but increases fortify effect), and Stormrider Boots (reduces accuracy rating but provides a huge added lightning damage boost to attacks).

A big surprise came with the announcement of the Ascendancy rework. All 19 ascendancy classes were rebalanced, while three of them were significantly reworked: Elementalist, Deadeye, and Inquisitor. Here are those changes in a nutshell:

Of course, all the others received attention, too. For instance, Slayer now has more power  spread over a wider selection of passives, while allowing easier access to the Slayer’s special Leech mechanic. Stay tuned for more details on other classes as the launch approaches!