Just before Christmas, we learned that Citadel Studios and Legends of Aria, originally Kickstarted as Shards Online, were being bought out, along with the game’s proprietary engine, by a company called Blue Monster Games. While that might have sounded like a new lease on life for the beleaguered MMORPG, a quick look at Blue Monster made clear that it is a blockchain gaming company knee-deep in NFT and metaverse awfulness.

Well, now the CEO of Reaper Games (that’s apparently what Blue Monster morphed into back in January), Joseph Rubin, has opened up on Discord about what’s in store for the game. There’s actually some good stuff in the message, including the renovation of Aria “from indie-quality to a AAA-grade game” with a 3-D perspective with an optional top-down camera, new map, boats, custom houses, and mobile functionality. Kickstarter backers will apparently see some rewards, and the two existing servers will be grandfathered in as Legends of Aria Classic, not wiped.

But Rubin also promises some disturbing bits, including “in-game poker tables” and of course a blockchain integration with “ARIA tokens” in the game, although there will apparently be a free-to-play version without most of it.

“The new client, moving forward, will have two game modes: (1) a free-to-play option and (2) a play-to-earn option. The free-to-play mode will not include the blockchain elements, while the play-to-earn gamemode will include them; however, to access the play-to-earn mode, you’ll need to purchase an NFT character. In addition, with this play-to-earn version, the coins in the game will hold real value, as we’ll launch them as cryptocurrencies. If this all seems complicated, we’ll try and simplify things for you over the next few months, holding regular AMA sessions as well as producing a detailed whitepaper/game plan and how-to guides.”

Rubin says he’s aiming to raise $10M selling these tokens, which will go into marketing and game development in an attempt to compete with the likes of Axie Infinity, which preys on third-world play-to-earn gamers. “There is no blockchain game on the market with the intricacy and depth of Legends of Aria, as well as no crypto-MMORPG on the market,” Rubin says. “This means that Legends of Aria will be the first and only blockchain MMORPG to go live in 2022.”

Rubin has been pretty active on the Discord with players this past week; while championing the work of the devs, including former Aria boss Derek Brinkmann, he’s addressed duping, item insurance, PvP, an Ultima Online-style criminal system, auction houses, flat endgames, and so forth. Apparently, the release is slated for Q4 2022.

We’ve written at length about the problems with NFT and play-to-earn games and why MMO gamers should probably not be putting any money into them. 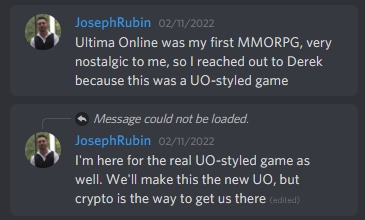