It’s finally here: New World has launched its fall update, and the Soulwardens of Aeternum now venture into the wastes of Brimstone Sands.

This is a massive update, featuring not just the new zone but a new leveling experience, a new weapon, a holiday event, and more. There’s no doubt in my mind that if this game weren’t made by a company that can afford to burn money, this would have been a paid DLC; it seems roughly equal in scale to one of Elder Scroll’s Online‘s $40 annual chapters.

All that is to say it will probably take me weeks to get through all this patch’s content, so what you’re about to read is not a comprehensive review of all it offers but snap impressions of what I’ve gotten to so far. Even so, there’s enough to say that it will take two columns to fully cover my thoughts on the patch. Today, I’ll tackle Brimstone Sands and Nightveil Hallow, with impressions of the greatsword and world revamp tomorrow.

I’ve been a big fan of New World‘s previous holiday events, so the first thing I did when the patch hit was to dive into the new Nightveil Hallow event.

This time, Amazon has shaken up the formula a bit. There are no presents to open this time; it’s all about battling a world boss, Baalphazu, the Marquis of Terror. If you’ve ever done any of Guild Wars 2‘s open world zergs or the golem fights of The Secret World, the event will feel familiar.

I’ve always loved this kind of content, but unfortunately New World‘s less-than-stellar engine can make it a bit of a struggle. I ended up having to turn down my graphics to cut down on the lag, though the good news is I can hardly tell the difference between the low and high settings. 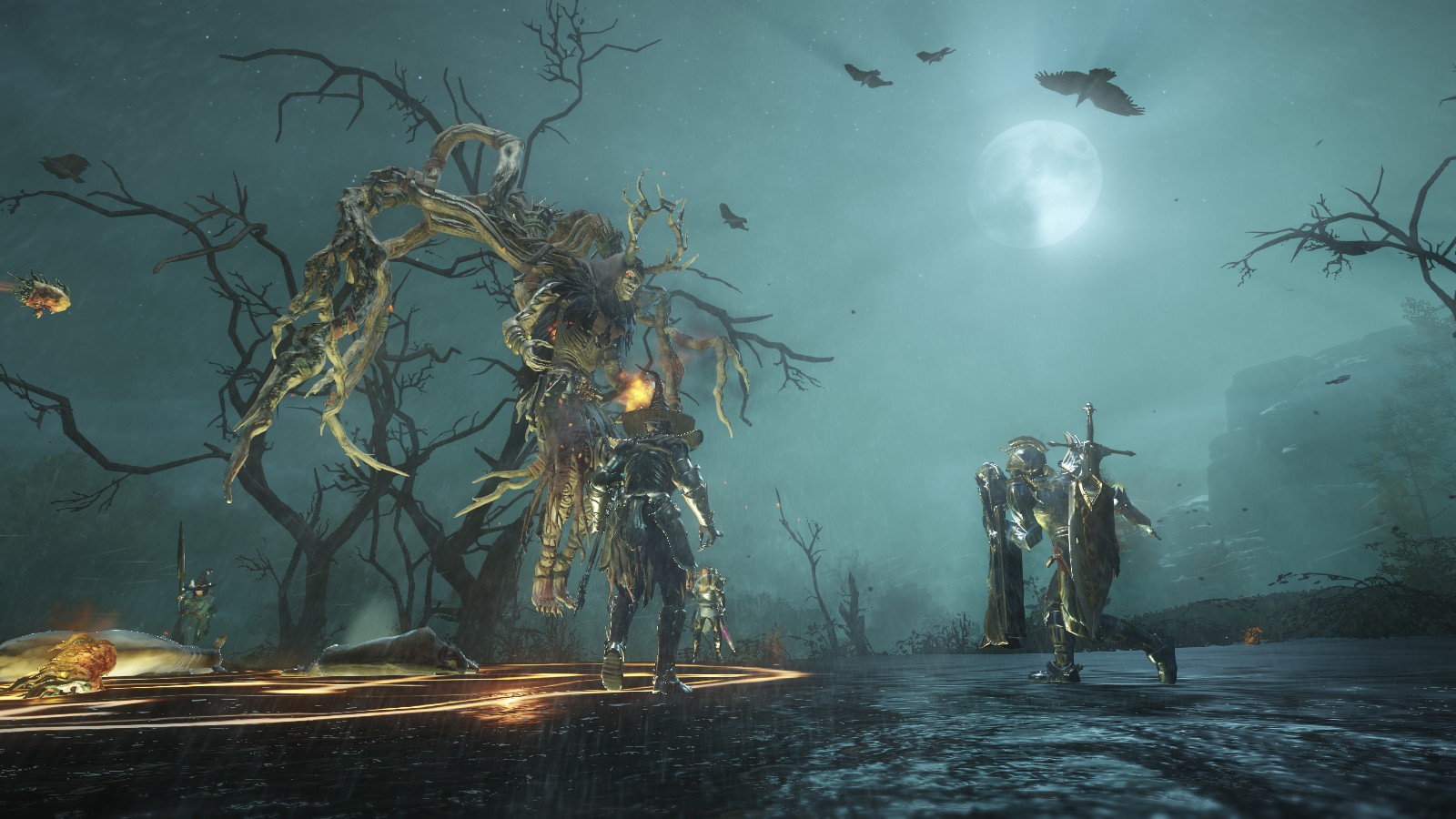 Once I overcame the lag, I found it a pretty enjoyable fight, if a bit overly long. Baalphazu shrugs off most damage normally, but the adds he constantly summons drop pumpkin heads that players can throw at him to deal high damage and deplete his stamina bar. Once the bar is emptied, he will be briefly stunned and take vastly increased damage for the duration.

Another thing to keep in mind is that some adds will drop a pool of slime when killed, and contrary to our normal instincts as MMO players, you actually do want to stand in it, or at least run through it. It will clear a dangerous debuff that stacks up during the fight.

Defeating Baalphazu nets you a little gold and a large sum of event currency up to three times per day. Anyone can fight the boss (though low levels will struggle to stay alive), but you need to be at least level 35 to have access to the quest that unlocks the better rewards on the event vendor.

Open world zergs being what they are, you can are likely to die a lot, so don’t expect to make a profit in gold on this event. The gold reward will barely cover your repair costs, and that’s if you’re lucky.

There’s also fewer rewards on the vendor compared to the summer event, but you can earn enough currency to acquire them all very quickly, and some of the cosmetics are just gorgeous. I’m in love with the witch hat. 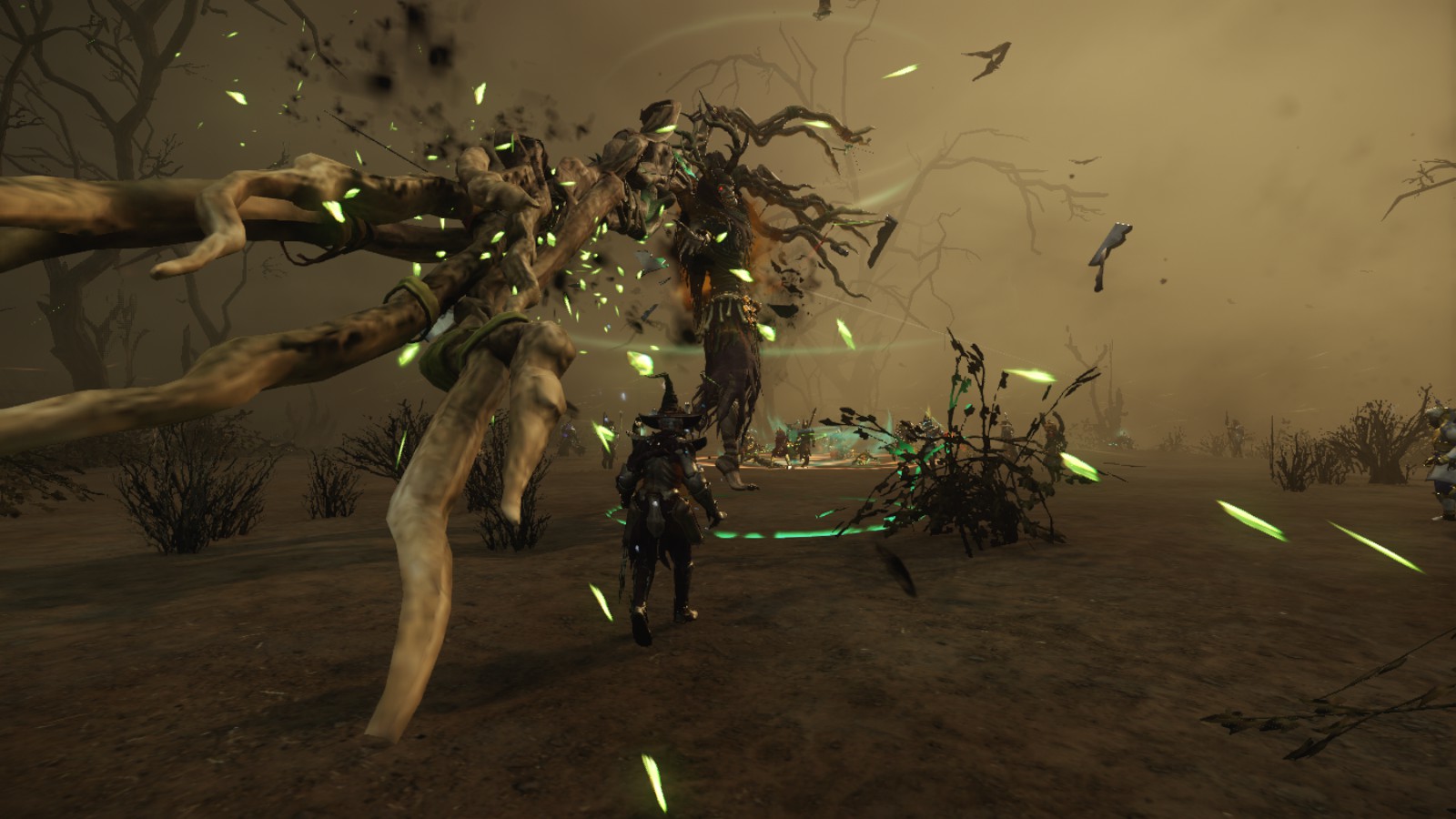 All in all, I don’t think this event is quite the slam dunk the summer event was, but it’s still better than the holiday events in most other MMOs.

As of this writing, I’ve only just started on Brimstone Sands itself. Deserts are among my least favourite video game biomes, and I can already feel the visual monotony starting to wear on me a bit, but the art team has done an admirable job of bring beauty to the desolation. The lighting around dawn and dusk is simply gorgeous.

Brimstone definitely makes me hope we get the newly announced mounts sooner rather than later. This zone is huge, and while the scale can be awe-inspiring, it also makes for a lot of walking.

On the plus side, those long journeys will pay off. The quest rewards in Brimstone are insanely generous. So far I’ve gotten gypsum orbs, housing decorations, and even high-end legendary gear just for doing simple “kill ten rats” quests.

As for the quests themselves, they are so far nothing revolutionary, but they’re competent and certainly a step up from the post-30 content from the base game. Dialogue is once again fully voiced, and there seems to be at least some effort to shake up the gameplay a bit. Reports of platforming quests sent a chill down my spine, but so far the one parkour area I’ve encountered was very easy, so hopefully that holds true for the rest of the zone.

One small touch I appreciate: Some of the lore notes now have voice-over narration, and once you grab the note, you can just let it play in the background as you adventure, similar to Diablo III‘s lore drops. 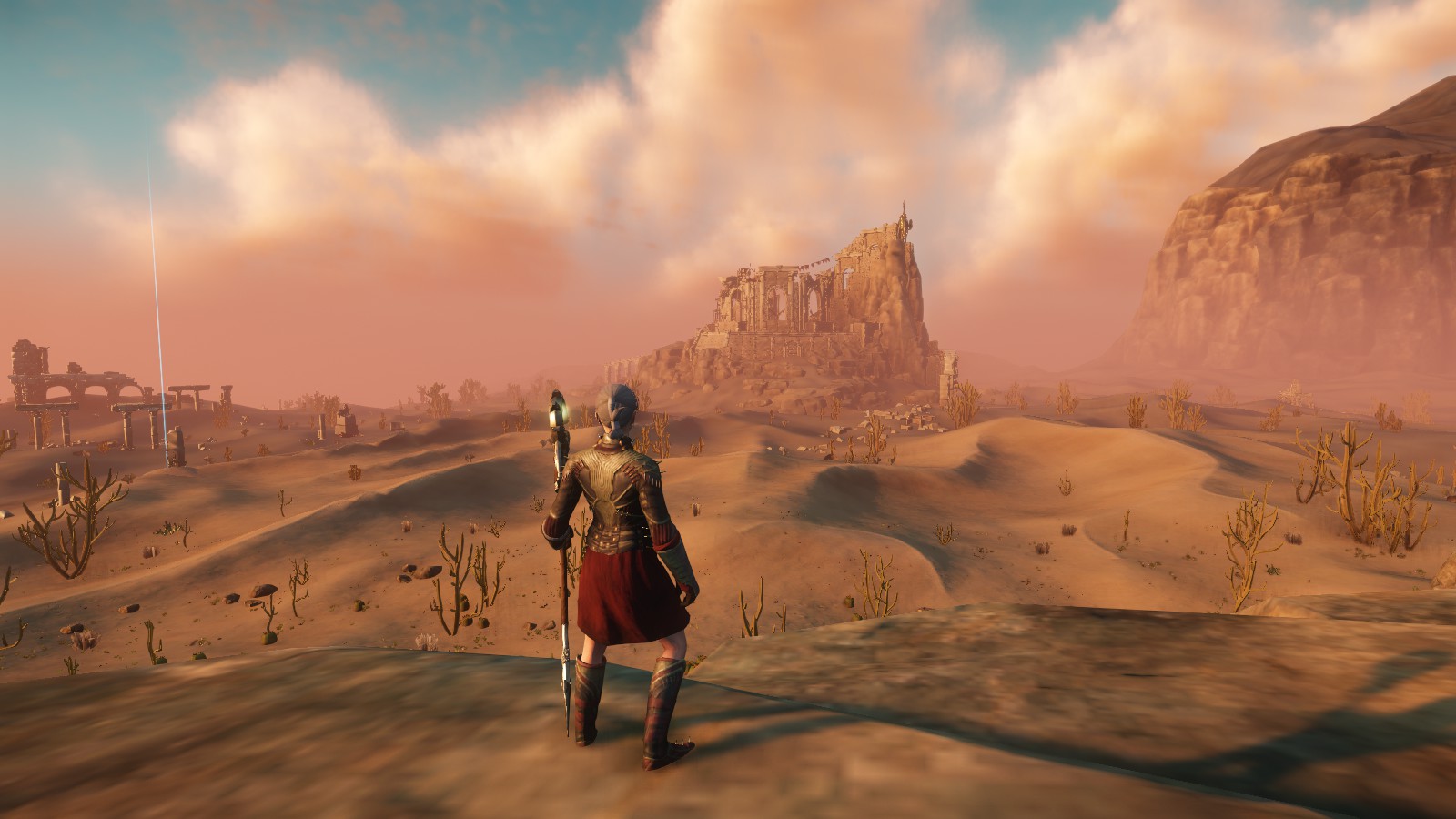 Something else I appreciate is that while Brimstone is mainly drawing from Egyptian and Roman culture, the NPCs still hail from nations across the world and its history, continuing Aeternum’s multiculturalism. It helps the zone feel like a natural extension of the existing setting rather than the same Fantasy Egypt zone every game apparently needs to have.

I’ve seen some concerns about Brimstone’s difficulty for casual players. It’s a dangerous zone to be sure, but as someone who’s only been 60 for a couple weeks and hasn’t set foot in an expedition since Amrine, I can assure you it’s still quite doable for the lesser geared among us. I wouldn’t recommend diving in wearing quest greens, but buying some cheap 590 gear from the trading post should be sufficient to get you ready.

Stay tuned for the followup Vitae Aeternum column, where I’ll cover the world changes as well as the new greatsword weapon.