Usually, I don’t combine two topics into one article, but these two things are important and I don’t want to go another week without addressing either one of them. Unfortunately, both of these items are also completely unrelated. I want to talk about datamining and a Massively OP guild forming on the Ebon Hawk.

First, if you’re a part of the larger Star Wars :The Old Republic community, you’ll know that there has been a large influx of leaks and datamined information about SWTOR‘s upcoming expansion, Knights of the Fallen Empire. I will admit that I’m highly conflicted about datamining, in general, and in this case I believe some lines have been crossed. And I’d like to clarify my position as well as probe your thoughts.

Secondly, as I mentioned in this week’s WRUP, I’ve taken over as leader for my SWTOR guild; I’m no longer just a placeholder. And I’d like to make the guild a semi-official SWTOR guild for Massively OP, which means that Massively OP readers will be welcome to hang out with us when they jump into SWTOR. 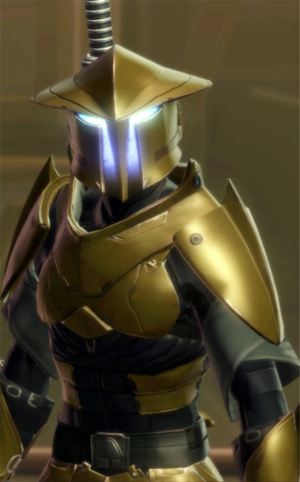 I want to be clear: I like datamining. In Star Wars Galaxies, I loved modding and diving deep into the client files. I’m not above exploring into places I probably shouldn’t be. And I certainly think it’s good for planning things ahead when it comes to guild planning or event planning. In the case of modding, it can actually make the game feel better without giving players a distinct advantage over other players. But after a big mistake early on in my writing career, I stopped publicly posting my datamining efforts.

As many of you are aware, I have written about SWTOR well before the game released. At the time there was a site that specialized in releasing unreleased information about every upcoming MMO. It started by releasing information about the SWTOR beta, including screenshots. People ate it up, and fan sites were livid.

One item in the pre-released version of the game struck a chord with me. I thought it both interesting and off-putting at the same time. And now that the game is released and it’s over four years after that incident, I think I can mention what it was. The leak revolved around the info that your species was related to the backstory of your character. For instance, the Ratataki Bounty Hunter had the backstory of being a former gladiator in the pits of Ratatak. I assume that it would have played into the some of the dialogue of the game. However, the moral of the story is that it never made it into the game, and it caused a bit of a rift between BioWare and me.

Currently, a handful of sites are reporting about some information found in the public test server client. These bits of information could be completely true, and I don’t think that any of the people who are reporting on datamined information are bad people. In fact, I really enjoy talking with the ones I know personally. But I think a line has been crossed by publicly revealing parts of the KotFE story with very little context — and this includes the reveals about companions.

I’m very conflicted about some of the other information that has leaked. BioWare has kept relatively quiet about everything in this expansion that is supposed to fundamentally change major parts of the game. We have two months until the expansion launches, and yet we don’t have much more information than we did two months ago. Two months ago, I produced a video that outlined 20 things that people should know about KotFE, and sadly, it still holds. Sure, there is new information about the game released since then, but it’s been from dataminers. There have been two cantina tours since E3, but we know relatively little more from the BioWare camp itself.

Are you as conflicted about this as I am? Don’t reveal any spoilers in the comments, but do tell me: How reliable do you think the information coming from sites reporting on datamined content is?

In the spirit of Massively OP starting guilds in other games, I thought it only appropriate to invite our readers into my guild in SWTOR. The guild I’m talking about is the one that I raided with on livestreams from Massively-of-old: Nefarious Intent. If you play SWTOR, feel free to join us.

My guild has a little bit of everything. We PvE pretty heavily. Our current raid team runs on Wednesdays and Sundays; we aren’t really looking to grow that team. However, we are looking to make a second, more casual team, and we would also like to have regular groups that like to do PvE content like flashpoints. We are also rewriting the storyline for the guild roleplayers. It’s not a requirement to roleplay, but it is a huge focus for me, personally. We have a great group of people who are super friendly and know the game very well.

There are a couple of stipulations about getting into the guild that I should warn you about. We do ask that members of the guild be 18 years old or older. There are sometimes adult and NSFW conversations that happen in guild and voice chat that older members of the guild will not be comfortable talking about if there are younger people in the chat.

We are an Imperial guild. (Clearly, because the Imps have the best stories.) We maintain a Republic-side guild that we drop our alts into, but if you exclusively play Republic, you could be lonely. If you don’t have an Imperial character, now is the perfect time to level one up as the 12x XP promo lasts for another two months. You can level up at least one character in that time.

How do you join? You could go to the guild website and put in an app. But if you’re reading this, I’ll give you another way: Log into the game, join the chat channel “massivelyop” and let me know that you’d like in the guild. I have too many alts to list here, so that would be the best way to get a hold of me in game.

To join a chat channel, simply type “/cjoin massivelyop”; that will add the channel to your list. To chat in it, you can type /4 (or whatever the corresponding number is) or pick it from the chat bubble icon on chat bar. I am online usually in the evenings EDT, but if I’m not on, I’ll try to have someone online who can invite you to guild.

If you’re already in a guild that you love on the Ebon Hawk, well, feel free to join that chat channel anyway and say hi. I hope to see you all in game soon.