We’ve looked back at 2015 for the launched games EverQuest and EverQuest II, the long-lasting beta of Landmark, and the MIA-and-presumed-dead (by some) EverQuest Next. Now it is time to look ahead at 2016. Instead of noting what we know, we get to speculate on what could be. What is on the horizon for this franchise? How will Norrath weather the next four seasons? Obviously a working crystal ball would be ideal right about now, but without one, we are left with trends, hopes, and outright wishful thinking. In 12 months we’ll see just how many of these were accurate predictions! Here’s what I see happening, what I want to happen, and what needs to happen in this next year for my favorite franchise.

What I see happening

Overall, I can see the franchise having a good year, but it will have to put some work into more than just the development side of things (see below in what needs to happen). EQ and EQII will continue moving ahead in development and keep their loyal fans fairly content with content. EQ Next will wow us with something; the world will see that it is still alive and kicking and has been chugging along steadily in development this whole time. And Landmark will see some updates expanding the building palette and adding at least one other feature (perhaps dungeons). It will also be the proving grounds of at least two more building contests, with one or more being focused on racial architecture. Of course, we’ll also be amazed by awesome creations players have constructed!

Expansions are in! It looks like expansions are here to stay for the first two games. (At least until minds change again, that is.) EQII even has a leg up on its older sibling, having already given fans a hint at work being planned on the next expansion. That same tweet also noted possible spring content, so there might still be DLC-type releases like Rum Cellar. As for what is in the expansion, you can basically count on there being a new zone. However, previous expansions have already gone into the sky, underground, back to the starting isle, and even to the land of the dead. What is left? There is an exploded moon in the sky if we want space travel to start. Although an expansion underground seems to have the highest probability, a surreal experience visiting a realm of consciousness would certainly intrigue the psychologist in me. Perhaps we can enter the mind of an old god who slumbers? Or what about visiting a realm of those gods we worship on Norrath?

Classic EQ will also surely see another expansion. With so many more expansions already covering tons of content, I can see it being a bit dicey coming up with a completely new area, so perhaps an area from before will be expanded upon. What I do not see happening is anything akin to new races or classes for either game. Although those are definitely money draws, the amount of work needed to pull them off (reskinning gear, animations, new loot tables throughout the game, skills, class balance, etc.) is way out of proportion with the resources Daybreak appears to have to devote to them. Better to use the time developing new areas and such. I also see the expansion pricing scheme to continue as it was introduced last fall: a regular version, a pricey version, and an excuse-me-how-much-did-you-say version (with many extra goodies in the latter). 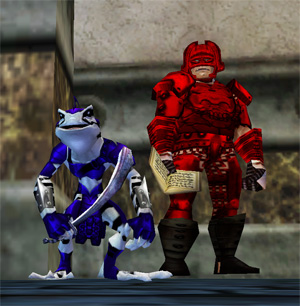 What I want to happen

One thing on the top of my 2016 want list is the return of a convention. It will undoubtedly have to be scaled back, but SOE Live not only did much for player morale but helped strengthen loyalty. And loyalty and morale are hot commodities! A new convention where devs show off stuff and mingle with players will rebuild those connections that were strained or lost during last year’s turmoil. Trust me, players want to believe! And the familiarity and comfort of tradition will be soothing.

Game-wise, I want the storyteller game master system in Landmark. This is one piece that will expand the game into a game, and not just a building simulator, in the minds of many. It is the thing I am waiting for most! And while this almost fits in the needs-to-happen category, I’ll place it here: Landmark’s beta needs to open up. A closed beta for two nearly full years feels extreme.

As for EQN, by the end of the year I want to be able to jump in and test a part of the game. Yes, Landmark has the basis of many EQN systems, but I want to walk around Norrath itself. I’d be happy to be a ghost figure that can’t do anything except just wander the landscapes and streets of the cities, looking at the environment. Even if we can’t do anything in the world yet, let us see how it is coming along.

What needs to happen

I think Daybreak may have had a little more leniency this past year than it will enjoy in the new one. Folks can understand the chaos and shuffling that comes with massive upheaval, from the company change to the personnel changes to even the office change. However, the studio has had a year now to settle in and get things sorted. Whether that was truly enough time or not, public perception is going to think it is. There comes a time when reason starts blurring into excuse; in 2016 Daybreak won’t be able to lean back on the changes as a reason for anything without losing face, or worse, riling fans up. The best way I see to avoid that pitfall is the one thing I see as really necessary for this next year: a return to the open development model that was being practiced so heavily in 2014.

Once you start being so open about development, you can’t just stop! Players got used to hearing about what was going on, even when all of it wasn’t earth-shattering news. It could even be talking about the difficulties and developmental walls that the team had run into. The point was devs were talking, keeping players in the loop. Now for EQ and EQII they still are. And bravo and thank you for that! But Landmark and EQN are still relatively — if not totally — silent. Switching from being open to closed-mouthed really makes it look like there is something to hide. This is surely not the image Daybreak wants to convey now.

I understand with a dwindled team and resources, that as much time that was devoted to community interaction and communication before — be it in posts, livestreams, or even cons — is not going to be happening now. Heck, we want the lion’s share of attention to be focused on the actual development of the games as well. But informational feast versus famine is not the only option here. There’s an awesome message I ascribe to in life: moderation in all things. The lines of communication need to open a bit more, not to flood us, but to provide at least a steady trickle of information. The key here is steady. Devs need to just start talking about Landmark and EverQuest Next again. It doesn’t have to be a massive reveal of major proportions. It just has to be something. I’ve said it before: The silence is deafening. If we haven’t heard anything by spring, I think folks will have officially moved on and just crossed EQN off their list for good. I would love to be shocked by an announcement of the game’s launch this year, but I am not keeping my hopes up that far!

Until devs actually start dishing some EQN dirt, disappointment and even apathy is going to reign for this game. While it definitely isn’t vaporware, that’s not going to stop folks from feeling like it has all gone up in smoke. 2016 can be the year Daybreak reclaims the hype, or it can fall flat by leaving players in the dark too long. Once all the excitement that has been generated to play your game has been redistributed to something else, you’ll never get it all back. And the longer you wait, the less you can retrieve.