END_OF_DOCUMENT_TOKEN_TO_BE_REPLACED
Warframe has been one of those games that I’ve always meant to look into as soon as I had the time. Well, thanks to TennoCon 2016, the opportunity arose to make the time. And I am glad I went! It may have been the first Warframe convention, but I think it rivals the bigger, established cons for feel and fun.

Over the course of the day I toured the Digital Extremes office with Game Director Steve Sinclair, hung out with devs, listened to the soundtrack for the second dream sequence (over and over), sat in on sound and art panels, and mingled with the crowd. From that, I came away from TennoCon with an interest in and excitement for the game and its upcoming plans — and an anticipation for a repeat performance next year. 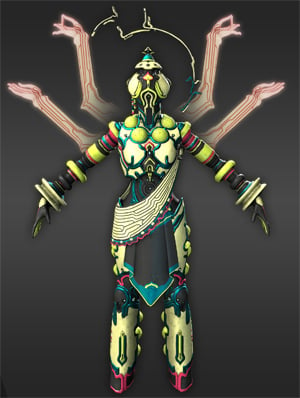 What Digital Extremes was at first a bit nervous about — like how many people would be interested, and who would actually travel to London, Ontario in Canada for a con? — turned out to be a success that, as VP of Publishing Meridith Braun said, blew away the studio’s expectations. VIP tickets sold out fairly quickly, and before the sale period ended, the entire event was sold out. So yes, the fans were coming, and they were excited.

TennoCon may have been small by most convention standards with over 1,100 player attendees, but the atmosphere was top-notch. Everyone was friendly; the whole vibe was of one big family (without any of the squabbles most families and reunions are known for). OK, so maybe there was a jousting arena where players tried to knock each other around with giant inflated tubes, but even then strangers came out of the ring as chums. Concerns about things and requests were delivered to devs politely. Even with long lines for merchandise and sold-out items, I didn’t come across the groaning or impatience you’d normally find in large groups. Those very few who chose to be overly negative or critical (mostly about aspects the brand-new Specters of the Rails update that launched Friday with some serious issues) were quickly told to chill out by their fellow gamers, and they did.

Most of all, I loved seeing the variety of fans in this pseudo-MMO. I met older gamers, younger gamers who brought along non-gaming parents, and everything in between. I saw a one-foot high rainbow mohawk and a very snazzy tuxedo with tails. I also saw my first Grineer! Cosplayed Excalibur, Limbo, the infected, and more also made their appearance at the show, mingling with the crowd and posing for pictures. And every one of the fans that I spoke with was happy to answer questions and share their love of Warframe. This is definitely a diverse community.

The convention itself might have been small, but one thing it accomplished was pretty big. Beyond pulling fans together for a day with devs and fostering friendships, TennoCon also raised a significant sum for a local charity. All ticket proceeds, the entire $78,839 CAD, went to Outward Bound Canada, a program that helps youth, women, and veterans.

The family atmosphere at TennoConn might just be an extension of the atmosphere of the studio as a whole. From devs supplying the voices to a family-style eatery and lounge, Digital Extremes seems to foster the idea of everyone is in this together. Everything is pretty much done in-house, and how much fun they seem to have was apparent in many ways, from the game tables in the lounge to the amusing videos shown during the sounds panel.

Before the official start of the con, I got a glimpse of what goes on behind the scenes during a tour of the Digital Extremes office. (Sorry I couldn’t decipher what was on all those white-boards!) I learned that for the most part, all of the voices in game are employees. A few newer voices are outsourced, but the majority of main characters are all in-house. This was really helpful in the beginning as any time new last-minute lines needed to be recorded, the sound department only had to go grab someone right in the office to get it done in short order. Publishing is also done in house, along with customer service. I got to poke my head into the Q&A room (which the testers like to keep dark), check out the motion capture studio, and even see the build farm, where various machines and operating systems were all testing things looking for errors. Note: You might be glad to know that only one error had popped up on that giant wall of monitors while I was there! A peek into the audio director’s office showed one of the sound studios and a collection of various contraptions used for creating different sounds.

Speaking of sounds, perhaps the best quote of the entire convention happened during the sound panel. Audio Director George Spanos was explaining that many sounds come from the real world. He noted that a recent recording session for the Grineer happened at a sewage treatment facility, prompting Rebecca Ford, the Live Operations and Community Producer, to quip, “So you’re saying the Grineer sound like sh**.” Harsh! Spanos also teased that there is a new weapon sound in development that has never been heard before. This sounds a bit like a new weapon may be on its way.

Optimal primes and other good stuff

There was one point when the crowd got really loud at TennoCon: the prime announcements. The fans sure showed their excitement over the new prime weapons and skins, erupting into cheers when the prime tigris flashed on screen, and again with the prime galatine. Enthusiasm did not diminish when the Necros prime warframe was shown and Nova’s deluxe skin. Also shown during the art panel were some new environments coming in update 19 expected later in July; these environments showed off a bit of the Grineer fortress for the queens.

Although the new warframe concept was revealed at PAX East, fans learned more about the fairy Titania at TennoCon. Her abilities include crowd control through levitation, granting buffs by swiping souls, and making enemies glow so razor butterflies will swarm them. As her ultimate, Titania also has her own archwing; she can also shrink to the size of her butterflies and attack alongside them.

During the Q&A segment, devs revealed more of their thoughts moving forward. They noted they are looking at clan and dojo stuff after getting The War Within done. They also do want to have commands for pets. Speaking of pets, there is a robotic pet being tested, but there is nothing official about it working out and becoming a live feature. There was also talk about a new ardvaark warframe with a weapon that shoots loincloths, but that is still up in the air. (To fully appreciate that idea, you can watch the full TennoLive broadcast from the convention.)

There’s more than gameplay updates in the works. Devs revealed that a cartoon of the first 100 days of Warframe is being developed by Mashed, and they showed off a clip of the action.

But that still wasn’t all. At the end of the convention, everyone was treated to a sneak peak of The War Within, the update expected later this month. The War Within is the final installment of the three-part update that included Lunaro, the competative sport mode, and Specters of the Rail. There were definitely some audible gasps with the ending clip, which features the Operator and the Conclave Master, Teshin. Be sure to watch through to the very end!

The first of many…

After this weekend, I am already looking forward to what Digital Extremes does next year. I’m hoping the convention expands to two days. Even if it doesn’t, I think its popularity and success signals that TennoCon 2016 is just the first of many more to come.

As for me, I am looking forward to diving into the game. I may have to wait to play Titania, but there are others to choose from for now. If you are curious about Warframe yourself and want to get a peek inside, I’ll be showing off those first few steps of a newbie this Wednesday, July 13th, at 8:00 p.m. EDT on OPTV. Join me then!

In accordance with Massively OP’s ethics policy, we must disclose that Digital Extremes paid for our writer’s travel to and accommodation at this event. DE has neither requested nor been granted any control or influence over our coverage of the event.
Advertisement