Superdata’s latest report on the worldwide digital games market is out, and Overwatch owned the month of June on PC, to no one’s surprise, with GTA Online “dominating” (their word) by showing up on both the top 5 PC and console lists.

END_OF_DOCUMENT_TOKEN_TO_BE_REPLACED
The pay-to-play MMO revenue list has held steady through May and June. World of Warcraft still holds the top spot, but the addition of Fantasy Westward Journey II at #2 back in May dropped Lineage, SWTOR, and TERA one place apiece and booted Blade & Soul from the top five altogether, and there they still sit. The free-to-play revenue list has been immutable this summer, with League of Legends, Crossfire, Dungeon Fighter Online, World of Tanks, and Dota 2 maintaining their positions.

The research firm highlights Evolve’s free-to-play re-launch and says it expects more shooters — like Battleborn — to change up their business models accordingly. It also argues that CS:GO may actually benefit from the crackdown on third-party gambling sites and that the mobile market is being hamstrung by severe new regulations in China. “We expect stagnant mobile revenues until Chinese publishers and developers figure out exactly how the new laws will be implemented,” the firm writes.

As always, we must point out that Superdata’s categorization will likely not align with most MMO players’ definitions; it still considers games like SWTOR and TERA pay-to-play rather than free-to-play like League of Legends. 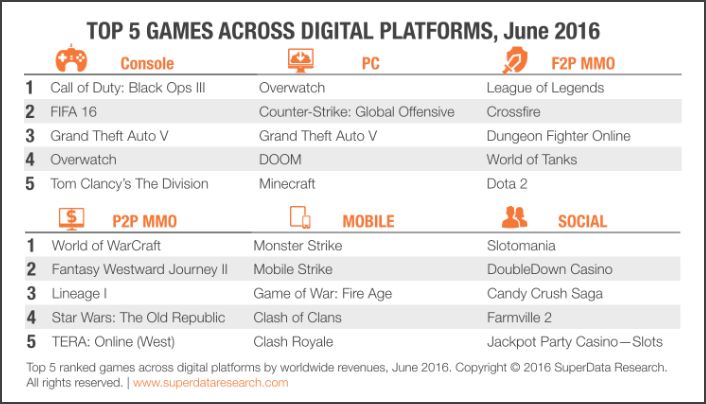