When you’re such an amazing archer, you don’t have to look at your target. When you’re an expert at the bow, you can shoot three arrows at once and have them all hit bullseye. When you’re Vincent, you shoot pure light in Final Fantasy XIV and make everything explode into moonbeams. Katness doesn’t have anything on that. 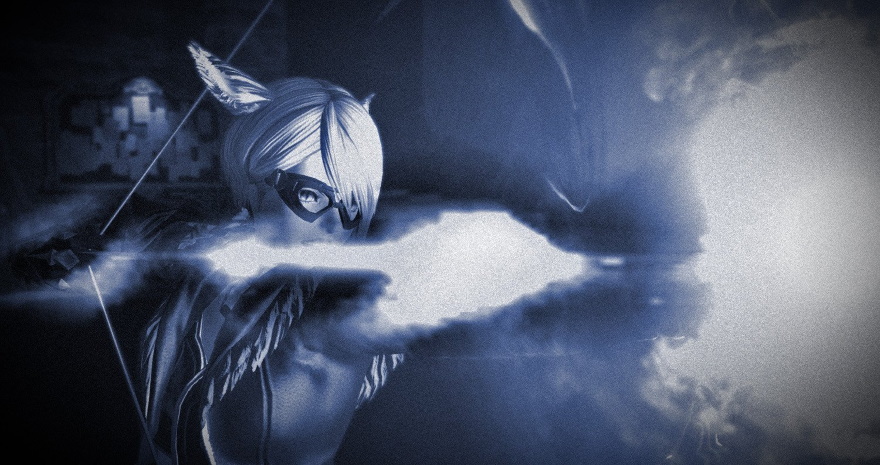 Last week, we asked readers to submit pictures of “impossible architecture” from MMORPGs. Hikari dived into Neverwinter for this extremely precarious house of ill repute.

“Well, if you’re going to build a tavern and brothel in a fantasy world, you might as well build it floating high above the city,” she writes. “The Moonstone Mask is indeed a magical place.” 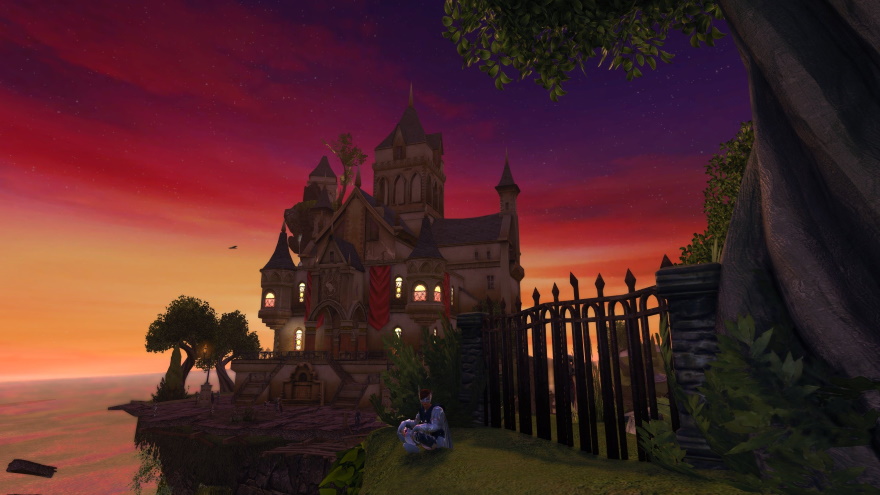 “A couple weeks ago when you asked for forest pictures, I realized I hadn’t taken any screenshots since 2019,” said Stormwaltz. “I happened to be in Elder Scrolls Online’s Valenwood at the time, but didn’t end up submitting anything. I am reasonably certain that skyscraper-sized hollow trees count as ‘impossible architecture.'” 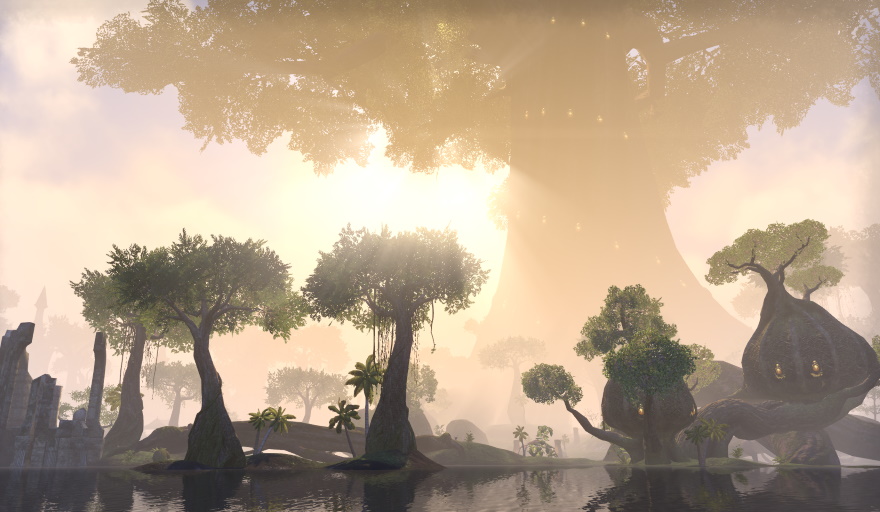 Utakata’s hanging out at Xanadu in Blade and Soul, which I assume from this screenshot is a new shopping mall that’s advertising big sales and spectacular sights. 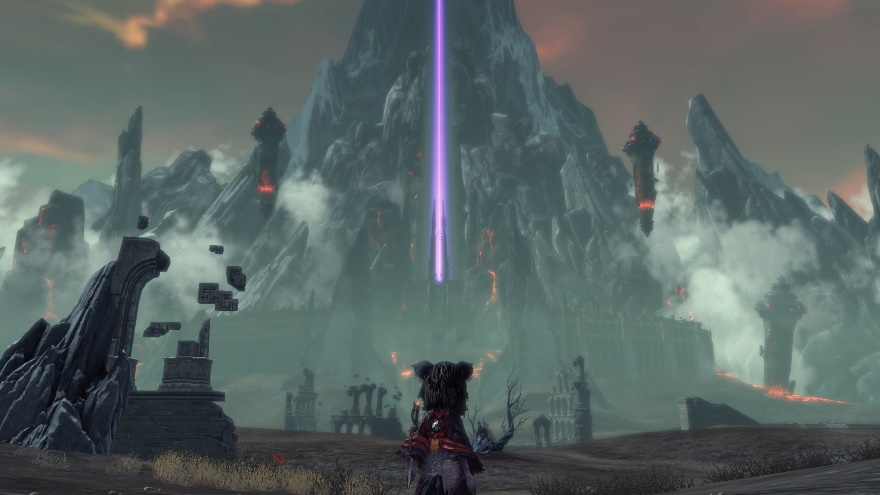 Finally, let’s blast off to Star Citizen with Ichi! Here’s an interesting contrast of ship vs. building, if you pay attention to the details.

“The ship is the Hammerhead, a anti-fighter corvette, it would take some serious handwavium for it to blast almost straight up. But more to the point of the column – the building on the surface is the four kilometers tall. It’s the Hurston Corp building, complete with cantilever suites, and it is visible from space.” 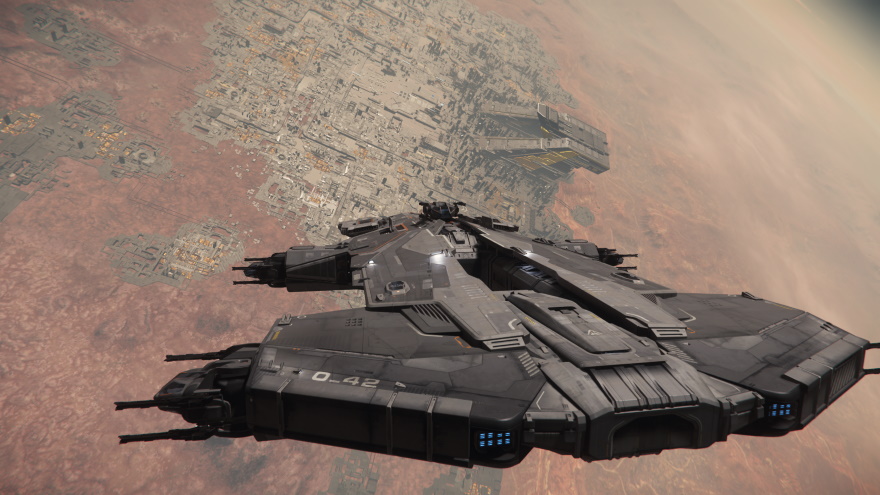 Stormwaltz’ tree picture up there made me think about how often we see nature repurposed in interesting ways. This week’s screenshot challenge is to show a picture of flora (plants and trees) repurposed — as a building, as a weapon, or even as a creature.

Well, how about a player character who’s a plant, wearing plant armor, in a plant-city, wielding a plant-bow with their faithful plant-hound by their side?

The open-world pseudo-rpg Assassin’s Creed: Origins has really surprised me. The vast “sense of place” in the game’s recreation of Ptolemaic ancient Egypt is striking.

From small details, through to large re-creations (e.g. The fabled, time-lost Library of Alexandria — my heart skipped a beat when I passed through its doors) to the characterizations of the NPC characters as recognizably human people, rather than talking “museum pieces”, the game is as close to the feeling of genuine “time travel” as I expect I’ll ever get.

I’m off-topic this week, alas, but I wanted to share some pics of something unexpected I stumbled upon.

I learned from the late, lamented The Secret World MMORPG that the ancient Egyptians mummified thousands upon thousands of cats.

This wasn’t only connected to the intermittent worship of the cat-goddess Bast, but to the simple fact that, if you wanted your cats to be with you in the afterlife, you mummified them, if possible.

In the game, I cracked through a loose wall in a crumbling tomb and discovered a cache of mummified cats!

There was also an tribute of sorts to one of the cats who had passed on — whether this was a developer memorializing a real-life pet, or meant to be something appropriate to the game world, I’m not qualified to say, but it was cool to discover!

The pics are much more “orange-y” than I would like, but that’s re-created ancient torchlight for ya!

A concerto for philodendron and pothos… O.o

PS: Thanks for the plugging my latest contribution again, Mr. Justin. /bows

Thanks for the feature this week! :)

Here is my toon just outside Lyhe Mheg riding the Korpokkur Kolossus (which is, according to wiki derived from a butterbur plant–see what I did there?)

Dang, Vincent, you’ve got such a good eye for pics. I hope you take photographs in real life as well, because you constantly show a real knack for finding and framing a subject in interesting ways.

It’s not a talent everyone has, my man.

Hope you and yours are well!

Thanks for the kind words, I hope everything is good on your end :)

I could have linked a ton for obvious reasons but limited it to a shot of the treehouse base in GW2, the character select for the plant side in BfN, showing Oak and Acorn, and BfN in game as the Oak!

The Acorn can turn into the Oak, kind of a plant version of a mech, and other acorns can ride on top of the oak to heal the team and shoot as well! I like the treehouse outfit for that Oak build too, it’s a great idea for a costume for the big tree character!

Very nice! Plants Versus Zombies: Garden Warfare 2 seems to be “the game which keeps on giving” for you, and that’s awesome. It’s great when you find a game you like that you can just keep on playing!