It’s a weird year when rogue servers are getting more love than some live MMOs, but we’re not sorry to see it. One of those servers is Star Wars Galaxies Legends, which just dropped a whopper of a community report with news of future updates and events.

Let’s start with the event, since it’s something completely new to SWG fans, as it’s not just a recycled event from the SOE days. It’s a brand-new festival called The Days of the Aned-Kla, and it’s coming early next year to help fans celebrate the server’s fifth anniversary. 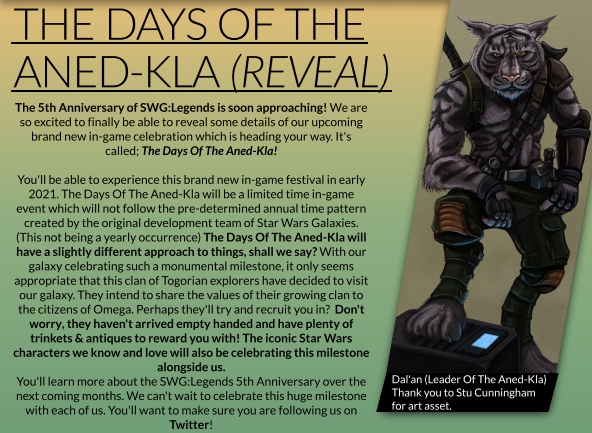 But what you’re probably even more interested in is the continuing teasers for Bespin, one of the planets the team has been working on since at least 2019 (that we know of!). SWG Legends dropped two more screenshots for the in-progress world, one an exterior shot from what is presumably Cloud City, and one of what sure looks like the iconic carbon freeze chamber.

Travel to Bespin in one Star Wars Galaxies emulator… eventually

Here’s the older shots that the team has released:

There’s a bit more to the letter, including a teaser for the Halloween event – look, it’s September 1st, which means it’s officially Falloween season, deal with it – and a look at the fancy new support ticket system. Check out the whole transmission on the server’s official site.

The emu community never ceases to amaze me – with the restoration of service for a loved world ripped from us, to the creation of new content to keep people going…

I didn’t have a great experience on SWGEmu – but I think I’ll definitely check Legends out! That screenshot on the bridge made my stomach flip haha.

Bree, I’m a LOTRO player and missed out SWG when it was originally out. I see you play this, any old school similarities to LOTRO? What do you like about SWGL?

It’s not really alike LOTRO. It’s a sandbox, the leveling experience is actually weak. The biggest draw of SWGL is that is a breathing world you actively wants to be part of. Having a house, being a known crafter, or a competent soldier, etc etc.

Yeah I figured they were pretty different based on that alone.

Honestly, what I like best about it is that it brings together people who don’t have much in common. I don’t roll with the roleplayers or gank with the PvPers or fly with the pilots or raid with the heroix people – I’ve done all that, but not really anymore; I craft with the crafters, and then trade with everyone else because the player economy ties everyone together. :D That’s honestly what I like most, that it caters to everyone instead of just one group with everyone else being tossed a bone as an afterthought. And SWGL has kept that tradition going.

I don’t think it has much in common with LOTRO – honestly, I was playing LOTRO more for questing than anything, so you could say I was playing both because they offered very different things. I think out of all the themeparks, LOTRO has one of the nicer crafting systems, though, and while it’s super different from SWG’s, they both taking crafting seriously, which matters to me. Housing too – LOTRO’s is far more limited, but it’s still nice to see devs who care about it.

If it is just combat and questing and storyline you’re after, LOTRO is the superior game, though. SWG’s takes some real effort to get through, especially in 2020. But the rest of the game makes up for that for me.

Thanks for the response. I have heard about the legendary crafting (puns) and have often thought of joining if only for that. LOTRO’s crafting is not something I play for except maybe the farming while I work at home. If the crafting is good in a game, I will try and play it for that alone. Housing is a nice addition as well.

I’d warn you about the jank, but if you play LOTRO, you know jank well, hehe. It can be culture shock for a while until you get adjusted to the older graphics/UI/movement! But once you do, yeah, there’s no better MMORPG out there for somebody who wants to be a full-time dedicated crafter and merchant over a long period of time. Can’t believe I am saying that about a 17-year-old game but here we are. :D

Yeah, me and jank go way back!

SWG is really, reeeeally clunky. But it’s a gem of a game if you get past all that.

One Shots: Hug a jellyfish today, why not?

The MOP Up: Dauntless dials up the dazzle