I’ve always had a great fondness for when video games can tell a quick story without words but rather with objects placed in such a way that the viewer can suss out what’s happened. Hurbster is a sucker for environmental storytelling, giving us this screenshot that tells us of mutually assured destruction between an adventurer and a monster.

I mean, if you got to go, this is a pretty metal way to do it. 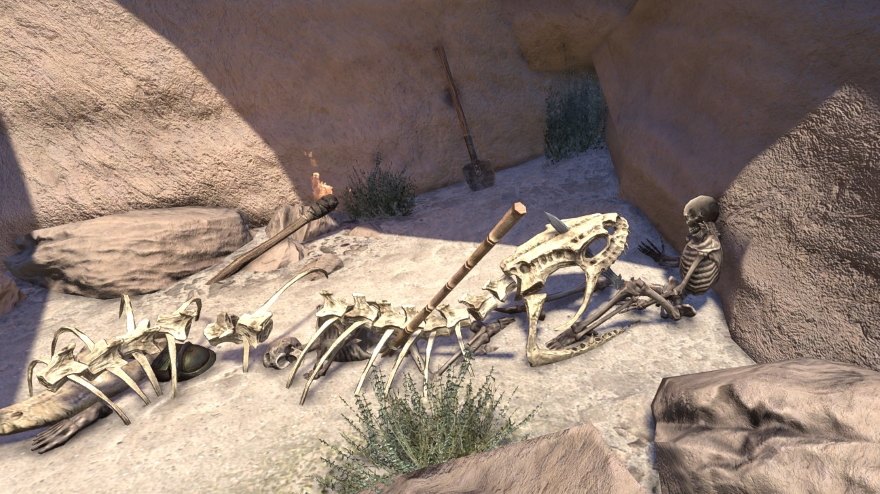 “I downloaded Guild Wars 2 again,” SmiteDoctor reports. “The story is weaksauce, but the game is pretty, open world is fun, and it’s easy to play when you’re drunk, which is exactly what I plan on being with my next two nights off with my wife at work.” 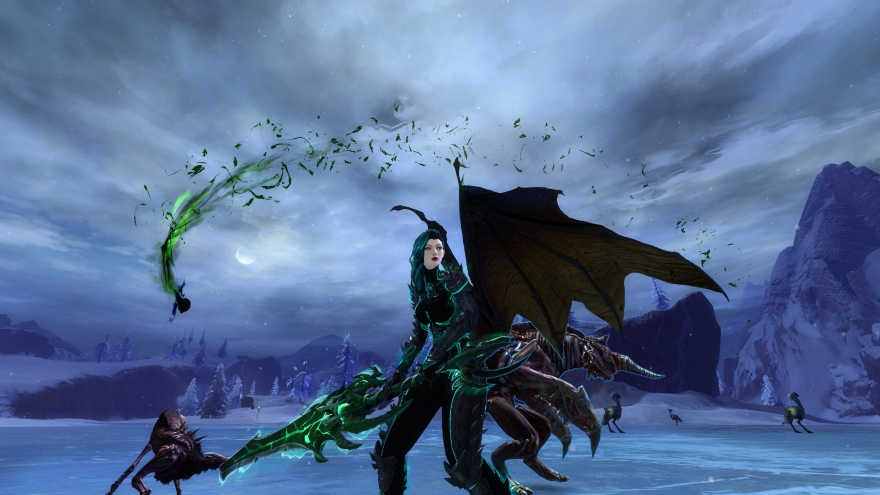 New World is a game that I expect a whole lot of screenshots from, especially when it launches next month (can’t wait!). Hikari was checking out the beta and reported, “New World is pretty enough. The camera controls leave something to be desired, but it’s a survival game so that’s not always something that is considered.” 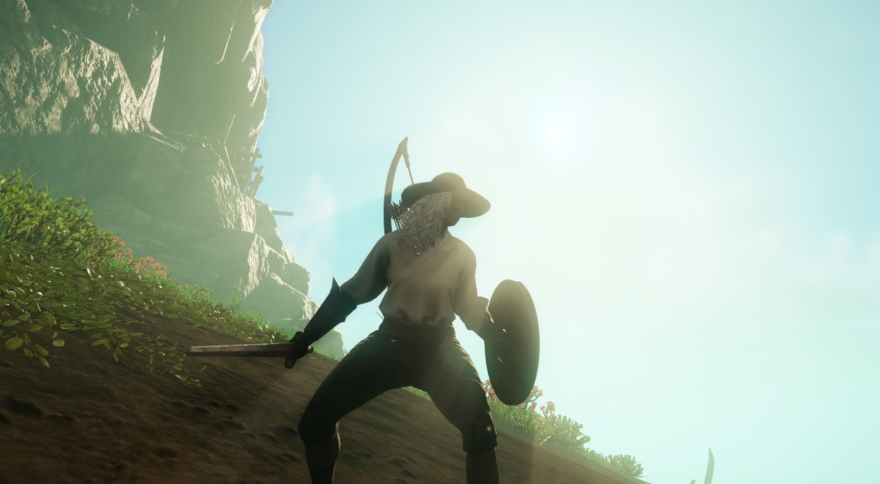 Speaking of new games, Bereman99 (the first 98 didn’t come out of the vat fully formed) is enjoying a bit of Swords of Legends Online these days. “It’s definitely a themepark MMO with the quintessential themepark design. You’ve got the combat rides, the dungeon rides, the PvP rides, the side activity rides.”

But does it have bumper cars? 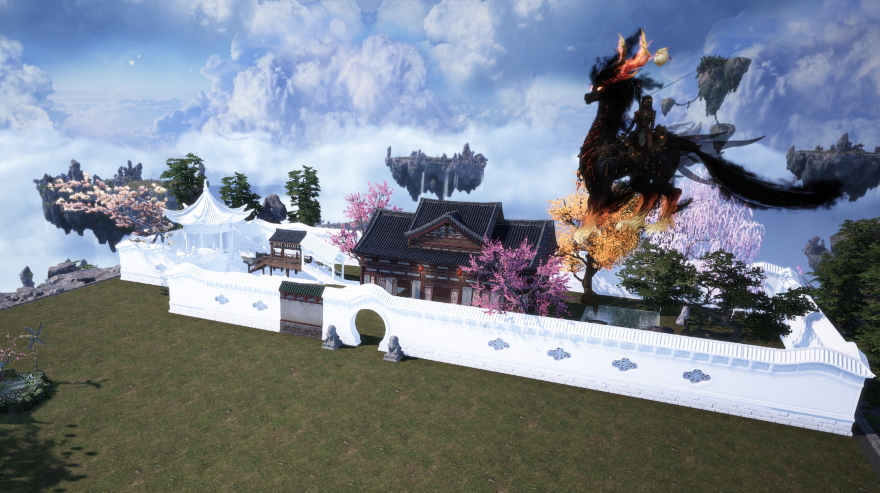 IronSalamander8 gave us another neon-infused picture from — where else? — an online Plants vs. Zombies title.

“While the vast majority of the PvZ shooter community prefer the two Garden Warfare games, one has to admit that for its faults, Battle for Neighborville can be beautiful. July is the ‘summer nights’ event so Giddy Park, the main hub has a lovely night effect, fireworks, and all kinds of cookout references.” 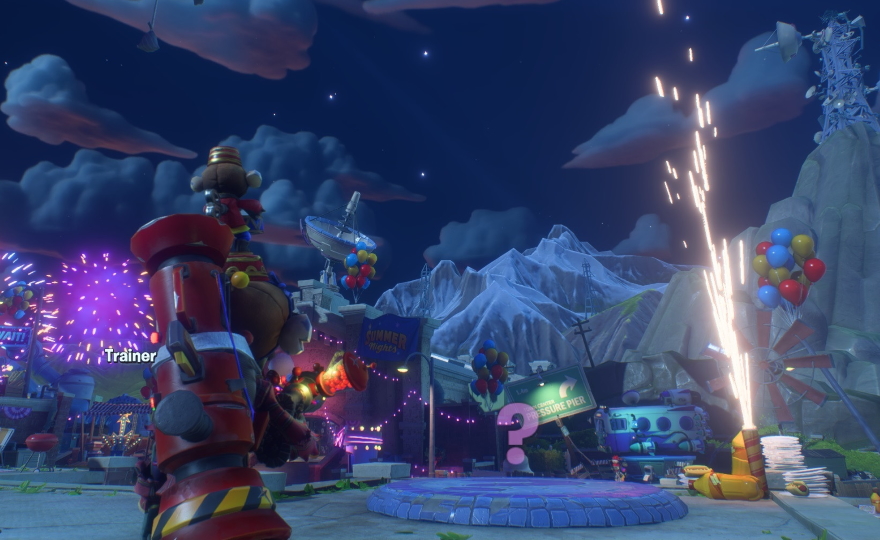 Where are you spending your long summer nights? Get grilling up some amazing screenshots to post and elicit envy and admiration from your peers!

YOU
SHALL
NOT
PASS!

Here are a few shots from Vabbi in the Brand in GW2, I’m in one of those Djinn safe areas which explains the visual distortions.

Oh those summer nights in the brand, where Kralky is hitting on you with the Brand like you’re the hottest thing in Tyria.

This one’s better I think.

What to do on a long summer night? Why, enjoy an apples of course. My Elezen here is, of course, very protective of her apples. No sharing from this pirate-themed lady.

In the beta world, specifically the beta that is New World – while I’m on the fence about various mechanics (some I like, some I don’t, some I’m ambivalent about), I do think they’ve done really well at creating a “frontier wilderness” atmosphere.

Thank you for sharing some New World pics. It’s always exciting to have new MMO around.

I know, another lotro shot. But there’s a story! A few years ago the lotro team did a rework of some of the older zones, breaking down a few of the more obvious barriers and making the transition between zones a bit more natural.

Today I was poking around near the far end of the Lone Lands, near the last bridge, and I notice a hill where previously there was an impassable cliff face. So I climbed up, and got this shot. It seems like they included it just to give you a view down the Hoarwell.

Thanks for the feature. I’m sure all MMO’s are filled with such storytelling, I’ve just played ESO for years and know where a few of them are. Here is another one, along with a couple of summer snaps.

Did you ask the fellow from the top picture if he wanted a glass of Amontillado?

The featured picture with the giant snake skeleton reminds me of a cartoon I saw once. “Never give up!” and it’s a heron trying to swallow a frog, and the frog trying to strangle the heron from inside the beak.

Alright I’ll take the hint, no more ESO. I’m calling sick ‘Mental Health Day’ from work tonight any way so I’ll try to get a few GW2 shots up.

I feel personally offended that your first featured is a MM Necro.

That’s how I roll, I suck doing anything else.

Seriously, I know you roll solo like me but it would be nice to friend you just to shoot the shit while we solo in GW2.

I kinda feel like leveling a new Guard/Ele full coreworld mapcompletion. If you want it, hit me up and we can schedule some days to give it a go. I just need to decide if he’ll be a Asura or a Charr.

Asura would be better for jumping puzzles, I think Charr with their movement and girth would make it worse than using a Norn.

Tried looking you up but your name brings nothing up in contacts, I guess you’re on a Latin American Mega Server?

Do a little dance, make a little love…:)

Summer Nights? Oh dear.. well, this is all Justin’s fault.

Summer days drifting away
To, oh, oh, the summer nights

Tell me more, tell me more
Like does she have a car?

She swam by me, she got a cramp
She ran by me, got my suit damp

I saved her life, she nearly drowned
She showed off, splashing around

If I didn’t know this was FF14 I’d assume you were using that tonic to make giant cats appear in GW2.

It’s GW2 with a permanent Chatoyant Lens.
We actually helped MJ get one on stream one year.
https://wiki.guildwars2.com/wiki/Chatoyant_Lens

I need this in my life.

50 Tigers Eye Pebbles and 10 Beryl orbs and you can buy it from the vendor in Lion’s arch.

Buy 10 elixirs, then exchange those for the lens