It’s been about a month since Monster Hunter Rise’s expansion Sunbreak released, and I’m still enjoying myself. Personal issues exploded during release that prevented me from giving release a proper treatment, but I’ll combine a few notes from that with my overall experience for today’s column, since we MMO players know that online games can change quite quickly once updates have released into the wild.

Unlike many online games, though, Monster Hunter Rise: Sunbreak still gives the impression that its lowest levels of content are being appreciated without its higher levels tiers being desolate.

One of the things that I’ve always personally disliked but appreciated as an option in the MH series is solo content. Yes, you weirdos who like single-player content covered on your MMO site can still solo or have people drop-in to help, but contrary to some past MH games, here it’s nice that I don’t need to do solo content before having access to multiplayer, either for myself or for my friends.

That isn’t to say you can do everything right out of the gate, as you still need to work through the ranks and tackle Urgent Requests to unlock new tiers, but multiplayer content is still fairly open. That being said, disconnects still happen and don’t automatically reconnect you to friends, but we’ll get to that later.

I’m slightly jumping the gun here, but “Follower Collab Quests,” which let you take certain NPCs out to “bond” with them, are single-player only. They’re nothing deep, but engaging with them has been interesting enough that I often tackle the single-player content before the multiplayer stuff, kind of like a practice run that also gives me materials to prepare me for the worst. I admittedly didn’t upgrade my gear for a long time, with my armor sticking with me until I reached the fourth rank quests, but even for a veteran like me, there were benefits. Master Rank (MR) monsters not only drop new items but some old rares more frequently, which allows you to build up sets you may not have been able to grab before or craft gems (called “decorations”) to kit out your armor.

Still, the NPC companions are… well, newb-ish. For example, the first NPC I brought out with me mounted a monster but didn’t use the finishing move. I’m not even sure I’ve seen one do this. Many of them can use a cutting weapon, but even when I focused on hitting the tail for nearly the whole battle (after breaking the head easily with my blunt weapon), they never hit the tail to severe it. Both of these are rookie mistakes, and it’s disappointing that the game isn’t modeling better hunting techniques, though I suppose it does also help ensure that bots don’t replace real players. 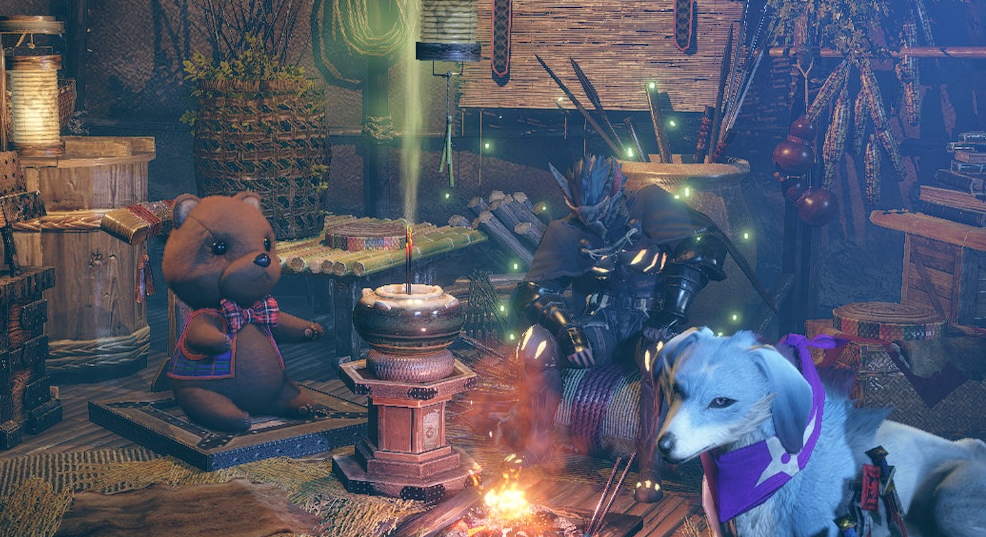 As you may have heard from various preview videos, a few things have changed. The “Move Around Village” Command has expanded into an “Open World Map” that lets you fast travel between Kamura and the new location, Elgado Outpost. We’ve got new Switch weapon skills (your in-game one; please don’t use the console to whack people), new lottery via amiibo scans, new melting pot items, new craftables, plus the ability to switch between Switch skill sets in combat.

All of this plus (relearning some skills if you’re a bit rusty) does make getting into the new story and quests a little time-consuming. Some quests will keep you in the old world, but others will take you to the new zone, the first of which is the Jungle. The Jungle has a very Monster Hunter World feel to it, with one of the new NPCs noting that you can throw a kunai at some rocks to make them fall. No, it’s not quite the same as the levels built around needing the clutch claw and slinger, but it’s a nice nod to the last generation.

As with other MHR levels, you can also kind of see where the puzzles might be. The Jungle has a big tree in the middle with what looks to be multiple platforms which immediately reminds you that hunting monsters is just one of many kinds of content you can enjoy. The Pokemon Snap-esque missions where you take pictures of certain monsters and/or behaviors remain, as do deliveries, base building, discovering rare non-combat animals (though not as decorations a la MHW, sadly), and lore.

There’s also a deluge of side quests early on, particularly for Palicos, the cat NPC assistants you can bring. I tend to favor Palamutes, the dogs, since they also act as mounts, plus they can now store additional overlaw items and help you track down certain things, like plants and critters, without doing a quest to unlock those abilities. Admittedly, I was reminded that in small arenas, the Palico are the superior fighting option, but the Palamute’s mounting skill is hard to surrender, especially as even with the new secret moves, I mostly just use the Palicos for healing and getting extra loot.

Overall, though, the new skills did make me look harder at the animal side-characters in ways I largely ignored before. I still feel as if most players can just grab whatever pet they like and drag it around (as long as it’s a dog so I don’t constantly leave you behind…), but I’m visiting the Buddy Expert more to find just the right pet for certain situations.

New subquests the expansion added also give some diversity. I especially like the tail-cutting one, not only because it was and is one of my favorite things to do in mainline Monster Hunter games but because I sincerely hope it motivates more players to aim for specific parts rather than seemingly attack monsters as if every hit were equal. Now if only there were more breakable heads and quests to motivate people to hit there…

The new Switch skills (such as Switch axe’s option between a long, charge building finisher or a quick burst of damage finisher) are fairly solid. Switch-axe in particular has gotten a lot better at closing the gap not only with MHR but in Sunbreak in particular. It’s still no hammer in terms of mobility, but as someone who’s used it as my main weapon since MH3, I’ve never felt this mobile before. It’s a bit cluttered, but your UI also shows how to use the Switch skills during combat, which may look ugly but is quite useful when you’re switching it up often.

Of all the changes, wall climbing without needing a wirebug sounded like one of those /shrug moments for me, but once you play with it, it’s one of the biggest new palpable changes. Previous situations where I’d get corned by bad timing suddenly turn into new opportunities not only for escape but for counterattacks. It’s not just that you don’t need the wirebug; it’s that the wall climbing is seamless, giving a higher sense of freedom, especially in the vertical sense. It really pushes that “rise” part of MHR’s name.

Community on the rise

Community-wise, not much has changed since my 30-day impressions of the base game. I still find that the Japanese players I meet seem highly skilled but aggressively catch each monster, potentially wasting any carve buffs. They might even be more competent than before, and I’ve certainly learned a few tricks from them myself, such as ramming the quest mob I mounted into another big monster so I can instead mount that and deal greater damage to the quest mob. It’s not a new mechanic, just one I rarely saw used, but I’ve been loving the results.

I’ve bumped into more competent Western players, but I still find that many still don’t seem to understand the mechanics, which isn’t unexpected; the MH series has been popular in Japan far longer, and any monster that appeared in a previous title largely reacts the same. This means that newer players, especially in countries where the game was hugely popular, still have to learn the ins and outs, while veteran players are instead able to focus on newer mechanics that often go beyond the basics.

Both of these matter not only for trying to get through a hunt without failing but because the previously mentioned failure to reconnect to your group can leave you in wildly different states. A disconnect from a veteran group often feels “clean” in that I don’t feel that I inherit as many problems as when I’ve grouped with newer players – things like a lack of supplies, multiple deaths eating away at my chances, a group that largely attacked any part of the monster rather than areas that can be severed for more carves…

On the one hand, these disconnects make having a community or hunting partner that you know and trust much more valuable. On the other, though, it’s also very frustrating that even when you are with your partner, you may struggle to rejoin that partner (assuming you used the right option; remember, if you get kicked and want to rejoin your friends, choose “Abandon” instead of “Return” or you’ll be locked out of the room).

Again, while not much has changed, I hope these anecdotes help illustrate that the expansion has led to skill growth within the community, even if it’s slow, which is something I honestly can’t remember feeling in many traditional western MMOs. Part of this may be because MR monsters get new tricks, and combined with new abilities, they can more easily tear a hunter down within seconds. But I’d like to also think it’s because Capcom has given players more nudges to learn new skills, varied armor pieces to get people to revisit older monsters, and and reasons for players to mingle more, allowing newbies and vets to meet up and potentially learn from each other.

Yes, the lack of a keyboard and very little use of voice chat means direct communication for Switch users results in very little intentional teaching. However, like MHW, MHR and particularly Sunbreak feel more visual. Even in the rare situations when I may not know how someone did something, I have the vocabulary to google it and find out how to do it myself.

While Sunbreak isn’t a perfect expansion, it delivers all the basics I think we expect in an expansion in a way that’s made the game at least as gripping as the base game was. If you enjoyed MHR but haven’t gotten the expansion, I’d advise you to rectify that. I had done several rank 1 quests right before submitting this article, and I had nearly no wait time to begin, so it’s not too late to get in on the action. And for long-haulers, with the upcoming armor augmentations, hunters looking for the perfect loot to chase will have yet another reason to stick with the game.