It was just over a week ago that Landmark‘s servers went offline in preparation for a major upheaval that affected nearly every system in the game, from a total reworking of topography to a complete character wipe. Indeed, big changes were ready to burst forth! And fans sat in eager anticipation of the servers’ return so they could jump in and experience everything because while we’ve had announcements and patch notes to prepare us, knowing what changes lie ahead is never the same as living them. What’s better than expected? What leaves a little to be desired? Here are my week-one impressions of life after the wipe.

One complaint players have had for a while is that the game feels like a ghost town. With so many islands to spread out on and the imminent threat of losing everything you’d worked for keeping others away, population was pretty thin. That has definitely changed. Players who remember the initial land rushes will nod knowingly: It’s hard to find an ideal spot! That’s not to say that there is no land available, but after a weekend of open servers, most of the inland waterfront slots are all claimed, as is a good share of the newest biomes. Speaking of the new biomes: If you haven’t seen them, you really should. The additional color palettes that deciduous and volcanic bring are so welcome, as are all the new props. The only weird thing is how abruptly the atmosphere changes for volcanic even if it is a swathe of only a couple feet! It is unsettling on the eyes to pop in and out of those colors so quickly.

Seeing the world come alive with players again is pretty awesome… and not. I am still not a fan of seeing construction — be it breathtakingly beautiful or really rudimentary — every few steps. I want to see open land; I want to leisurely scan unbroken vistas and enjoy the sunrises and sunsets. Instead, we are back to tripping over neighbors and having our eyes catch on numerous distant blobs that haven’t yet rendered. I’d personally like to see a bigger buffer around claims to allow for more open space as well as a cap on how many root claims can be plopped down on each island. Need more room? Make more islands! If an island feels more empty, then great. Not every place should be a metropolis teaming with activity. With these islands, there’s no need to server merge as in many games; just revel in the open feel of some areas. And personally, I am still holding out hope for the promised larger landmasses that will equal multiple islands all connected.

That said, I still absotively, posilutely love finding, exploring, and admiring new player-made creations! I am not advocating in the slightest for a smaller population, which would mean losing out on amazing sights, but I do desire lower population density so that that such discoveries are pleasant surprises stumbled upon instead of something I smack my forehead into every 20 steps or so.

Speaking of stumbling upon things, I am seriously hoping this is just a beta bug because every time my mates and I went to lower tiers, we ran into the same exact ruins in the caverns! The tier one, tier two, and tier three caverns we explored all shared ruins. In one tier three cavern, the same ruin was placed twice!

An added benefit of this update is that there are five styles of starter homes players can choose from to place, ensuring that even those who don’t feel like building or aren’t yet comfortable in their construction skills can have a decent abode on their claim.

Moreover, for anyone who had trouble placing attached claims where another claim buffer intersected theirs, Wednesday’s hotfix made it available again. I have tested this personally and it is indeed fixed. 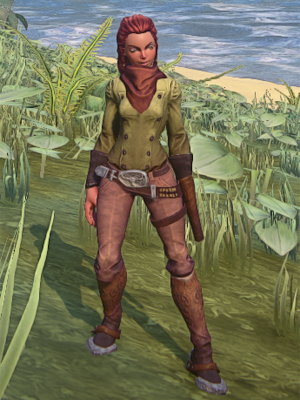 If you love sandboxes, chances are you like having choices. And most folks stretch that to include what their character in game looks like. I happen to be one of those people. That’s why I greatly appreciate the additional hairstyles (I am sporting a new coif myself). More than that, I am so dang stoked for the new outfits that are available! There are new sci-fi suits, fantasy frocks, and now even western wearables. That’s right — we finally have a selection of cowboy clothing options to gussy ourselves up in, and I am finding these outfits to be my favorites. (I just really need a six-shooter to slip in my holster!)

Personally, I am trying to keep one of each theme in my inventory at all times so that I can fit the feel of any claim I happen upon during my adventures, though it actually appears I needn’t bother. Why? Because the clothing has been dropping at such high rate right now that when you add in the clothes you earn from the plethora of achievements (more on those in a minute), your inventory fills up right quickly. And inventory space isn’t something we have in abundance. I seriously can’t have that much loot luck! I have five copies of one outfit alone in one color, which doesn’t account for all my copies in other colors. On the positive side, that means I have some clothing to give away to folks on the OPTV streams! On the negative side, everyone probably has them all by now anyway. Maybe it is all a ploy to get folks to buy bag space; I am pretty sure that will be my main Marketplace purchase. It does appear that as of Wednesday’s update, the clothing drops rates have dropped off, but we’ll have to see if that is sustained.

As much as I read through patch notes, this one little gem slipped by me (and therefore totally surprised me when the update went live): “Founder’s Pickaxe can now be upgraded.” Instead of your cool founders item getting tossed aside as you craft advanced tools, you can just keep upgrading when you need to harvest higher tiers.

Other than that, crafting is a bit of a disappointment to me. I am not a fan of crafting being overly simplified, and this is just way too “click button, get prize” for me. I don’t think easy necessarily equals fun, and I miss salvaging as at least an extra layer in the systems. However, we have been told that salvaging will return in its more complete form later, so there is that. I don’t know yet how I feel about that little button beside my hotbar that lets me insta-craft any prop wherever I am. I am sure I will like this better when I am trying to decorate a mega claim and don’t want to keep running back and forth to my crafting equipment. In fact, considering how it will save on bag space doing it this way, I already like it better than I did a few moments ago. 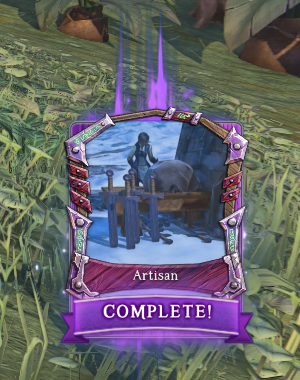 When the devs said the patch would herald achievements, they weren’t kidding! There is a slew of of them, and each time you complete them, you get a pyrotechnic display in celebration of your accomplishment. I am not kidding: You get a sparkly pop-up that explodes on your screen in a flash of lights and sound. I have to say, as much as I understand the reasoning behind the system and even applaud the effort to give direction to new folks, the current implementation makes me uncomfortable. It feels like telling players “you are all super-special winners!” for really doing nothing special at all. Throwing a parade with excessive fanfare and sparkles for picking up a tool is just way too overblown. One thing I think would make it more palatable for me is to seriously tone down the achievement notification itself.

There’s another aspect that nags at me: I hate to admit it, but the achievement system is taking away from the sandbox nature of the game for me. True, I can turn the UI element off so I am not watching achievement progress, but I still know the system is there. And it taunts me! Once progress has been started in some area, I find it almost impossible to keep myself from dropping everything and running off to complete it. Of course, I want the gifted goodies we’re rewarded with for completion, so how could I not want to jump on the rails a while and load up on cool loot? I do appreciate that players can get to the most fun aspects of the game (like grappling and pulverizing) more quickly, but again, I just think it is overdone a bit.

Lest you think I am all negative Nelly on this update, I am not. I’ve spent more time in Landmark this past week than I have in the last couple of months easily — maybe even longer. Friends and I are having fun again, just exploring and checking out the sites. The knowledge that I won’t have to start over again again fires me up something fierce; I am ready to to make some serious progress now and harvesting is fun once again. I am having fun!

Even so, Landmark is still a beta, and everything is still being balanced, tweaked, and otherwise adjusted. I can accept that. I expect it even. But after playing for a year and a half, I do yearn for some kind of permanence, and I have that now with my character and my in-game progress. I am sure I am not alone in that sentiment. I’ll admit that as the game continues its development, I am hoping some adjustments to lean the way I’d like. Until then, I’ll enjoy myself and make my plans. Oh, the plans I have. Now if you’ll excuse me, I have some more spelunking to get to…

You can still sign up for Fractured Online’s early February alpha...