Despite being a two-year-old game, The Elder Scrolls Online has made a good showing at E3, which really shouldn’t have surprised me — but it did. According to ZeniMax marketing, the game has surpassed even its own expectations. I don’t think that we can say that ESO is the most successful Elder Scrolls game ever; looking at the raw numbers, we can see that Oblivion outsold ESO, and after five years players are still making new and more complex mods for Skyrim, which has also outsold ESO. But regardless of what you think of the game, seven million copies sold does mark ESO as one of the most successful MMORPGs to date.

Along with the statistical report, ZeniMax also announced a slightly controversial change coming to ESO called One Tamriel. The idea is that players should have the freedom to travel the whole in-game world without arbitrary restrictions. With the success of level-syncing in the recent DLCs, ZeniMax felt it should continue this trend to the rest of the game. Although I agree with this decision, I can understand some of the concerns of the player who are resistant to this change. That’s exactly what I’d like to talk about today.

Let’s jump into the pros and cons of One Tamriel.

The first thing that comes to mind for me is that One Tamriel will give us that same feeling we get in most Elder Scrolls games: You can go where you want, do what you want, and set your own pace. In the current game, the zones do kind of open up once you hit level 12 or so, but you’re still limited to that one specific zone until you progress to the level minimum for the next zone. But One Tamriel will literally allow you get on your horse and ride from one end of Tamriel to the other. (Well, there might be a bit of a wayshrine jump between factional zones.)

The biggest thing I enjoyed about Skyrim was that I could just go anywhere, and as long as I had the skill, I could take on any mission or dungeon that I wanted to. I missed that in ESO. The biggest appeal for Elder Scrolls Online, besides playing The Elder Scrolls with other people, was to be that all of Tamriel was open for exploration — at least, that’s what many players thought, so when we logged into the game for the first time, only to find out that it was very linear, our hearts sank. Because of the less-than-stellar exploration at launch, many players didn’t even consider it an Elder Scrolls game.

I believe the current game is more than worth jumping into because of many of the recently added features, but if you’re looking for that one last little bit to push the game over the edge of good to great, One Tamriel is the feature you’re looking for. 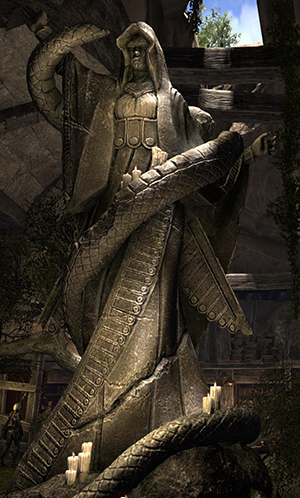 Some of the earliest tabletop RPGs have been about making your character stronger as you play through. Many of those old PnPs used a linear leveling system. Wizards of the Coast did that with Dungeons & Dragons and the Star Wars RPG. There was a solid path to greatness, and if I’m completely honest, I’ll admit that kind of progress can be very satisfying, especially to those who are achievers. And although One Tamriel will still have a leveling system and each level will have its own rewards, there will no longer be that strong sense of progression. Each level becomes a meaningless hoop to jump through.

I can’t say that linear progression has ever been a reason for my playing an RPG, but I can understand that want. World of Warcraft became the most popular subscription MMORPG in the west based on it. Sandboxy players might not understand this desire, but there is clearly a reason that some people get excited every time an MMO announces that it’s raising the level cap.

I believe the satisfaction in ESO for the leveling enthusiasts will have to come from the individual skill levels. This will hearken back to the time of Ultima Online or Star Wars Galaxies… or if you’re super old, West End tabletop games. The achiever will want to hone specific skills and gain the satisfying linear progression that way instead of an overarching character level.

Do only the quests that you want

I enjoy the quests in Elder Scrolls Online. There are some very satisfying feats of heroism, and the fact that NPCs remember some of the things that you’ve done makes doing some of those heroic quest even more worth it. The quests can also dive into some deep and dark character development, making them interesting and moving.

But with tens of thousands of quests, there is no way that ZeniMax could hit the mark with all of them. Some of the questlines are clearly better than others, and some are just bad. Although we can’t magically make the bad questlines just disappear, we can skip them when One Tamriel launches. Right now, though, we still have to play through certain bad quests because we need them to move to the next zone.

Sometimes I enjoy seeing a questline from beginning to end without stopping. Of course, then I will go back and retrieve the other quests that I ran into on the way. Some storylines lose their momentum when you’re sidetracked by other, smaller quests that aren’t part of the overarching story.

When Star Wars: The Old Republic switched to a level-syncing system, one of the developers said that the only reason that people would have a problem with their version of level-syncing is that they really enjoyed plowing through low-level content like a bulldozer. I don’t believe that’s 100% true, and ESO’s level-syncing will be different because it works both ways (leveling up and scaling down).

I can see why people will object to level-syncing because of this for a couple of reasons. First, it can be cathartic to just mow down mobs of enemies without any effort. And secondly, there is a sense of satisfaction to being able to say definitively that you are done with a zone and you will never have to worry about going back because it’s no longer trouble for you.

Of course, this list isn’t exhaustive, but these are the key pros and cons from my perspective. Which ones did I miss? Which are the reasons most important to you? Let me know in the comments below, and I hope to see you in Tamriel soon.

EVE Online highlights how industrial players provide the fuel for the...

Jeff Kaplan leaves Blizzard Entertainment and his position as director of...