Yesterday, Daybreak finally broke its long silence on PlanetSide Arena with a teaser trailer, and as of today, the studio’s got a new dev letter. Gamers will recall that last December, Daybreak announced a massive-scale battle royale game called PlanetSide Arena, a buy-to-play title hitting early access in January. It was delayed to March, and then to “summer” as the studio refunded pre-orders. Then followed six months of quiet until yesterday’s video, and now today’s dev announcement, which confirms the game will make summer after all as it’s launching into the first phase of its early access on September 19th.

“We’ve always thought of PlanetSide as an evolving saga that will eventually escalate beyond Auraxis to interstellar war, and PlanetSide Arena is where it will start,” Daybreak says. “Expanded factions, new weapons and vehicles, battles on distant alien planets (and the space in between) are all part of our vision. Over the next year we will begin to explore a future that will see an evolution of the empires and introduce new ways to wage all-out planetary warfare, filled with new game modes and classic favorites reimagined, all at a scale that can only be created through a PlanetSide experience.”

“Our initial launch in Early Access will feature the new Squads mode (12 soldiers per Squad) and Teams mode (3 solders per Team) in epic 300-player matches. Three initial character classes (Assault, Engineer, and Medic) and an expansive motor pool including tanks, hovercraft, and jetpacks offer players a variety of strategies and playstyles to choose from in every match, with freer movement mechanics and more explosive combat options than ever before. The new personal loadout system, a visual overhaul for the game, and character mods that add utility to your weapons and battle suits are just a few of the additional new features we’ve worked to implement since our first beta sessions. PlanetSide Arena will continue to add additional modes, vehicles, weapons, classes, events, and maps throughout our time in Early Access – including Massive Clash, an intense base vs base conflict that supports up to 1,000 players.”

There’s a new roadmap and trailer too, pinpointing Q2 2020 for the full launch. 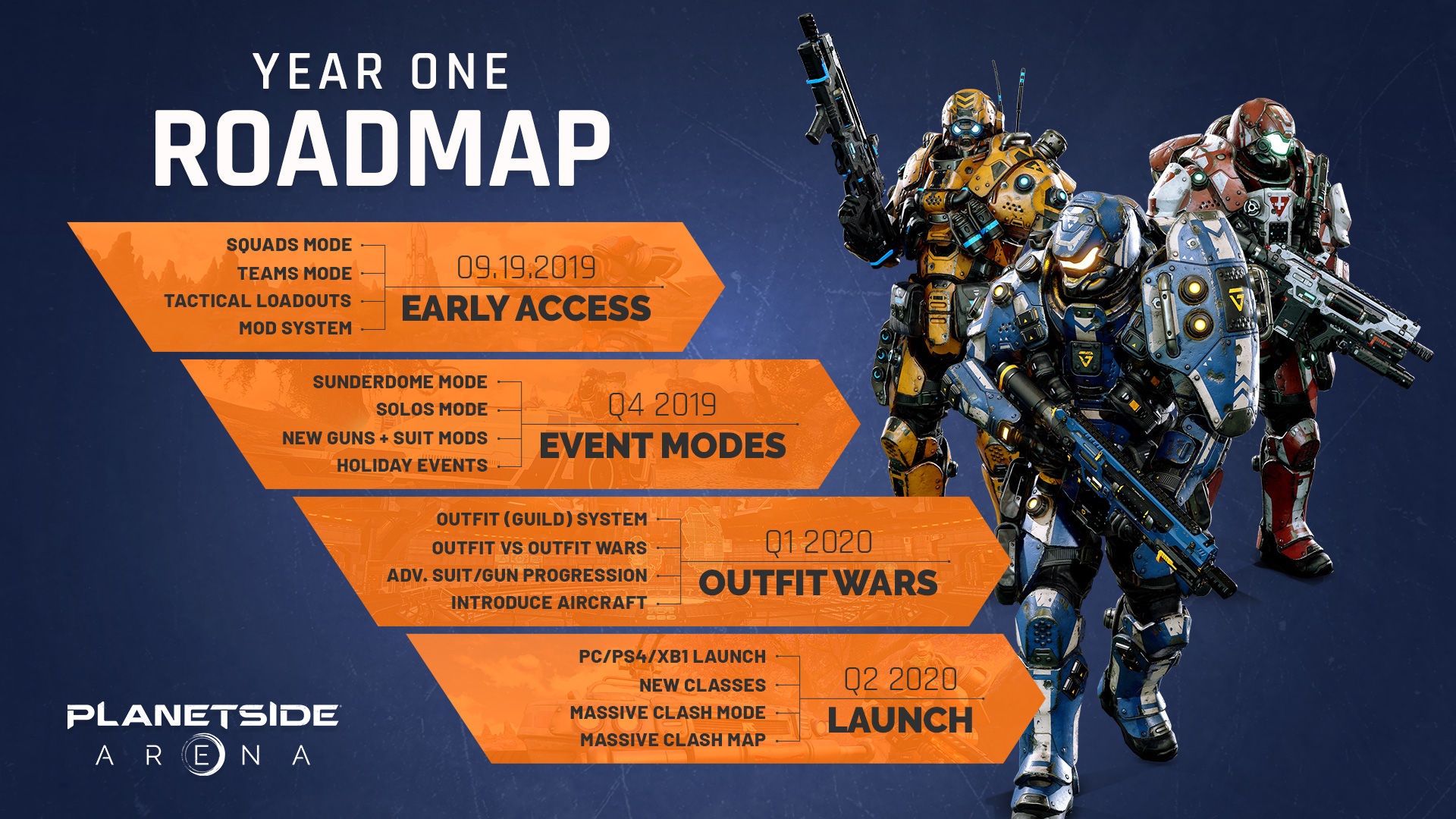 Worth noting again is that we’ve been covering Daybreak’s behind-the-scenes filings of new corporate names and trademarks, hinting that some sort of studio split or at least rebrand in the works. Get caught up on everything we know about PSA!

Leaderboard: How worried are you for PlanetSide Arena and Daybreak right now?

Daybreak is delaying PlanetSide Arena again, this time to summer 2019, and it’s refunding preorders too

Leaderboard: Will you be playing PlanetSide Arena?