There are certain things you can count on in life, things to set your clocks by. One of those is my quarterly chat with Grinding Gear Games’ Managing Director Chris Wilson to discuss Path of Exile’s upcoming content. So I was expecting our conversation last week about the next league. What I was not expecting was to hear that it’s a secret!

END_OF_DOCUMENT_TOKEN_TO_BE_REPLACED
Thankfully, he wasn’t referring to the entire league — just the story. Wilson gave me the heads-up on a number of different features of the Delirium league, which starts March 13th for the PC and the week of March 16th for both consoles. He showed off new league mechanics, new skills, and new gear. He shared the greater character diversity and more customization tools incoming. He just wouldn’t share the why behind it all. I have to admit, this league entices me like no other precisely because I have to discover the story for myself all while my character slowly descends into insanity.

Let’s learn what we can about Delirium. Of course, I also couldn’t pass up a chance to ask for a Path of Exile 2 update either!

For the first time that I can recall, the league preview didn’t include plot elements. Wilson explained it would be light on them because devs want the players to uncover the story for themselves as they play. Who is the antagonist? Why is this all happening? You won’t know until you experience it. That is by design, and I couldn’t be happier! This is exactly my kind of play! I am all about the story, and getting to uncover the narrative myself is the greatest incentive to dive in. Others may not be as entranced as I am at this, but I’m pretty confident that discovering a mystery is still enjoyable for many.

Instead of any whys and wherefores, Wilson provided a look at the what that players will encounter in Delirium. In each area there will be a Mirror of Delirium, where a ghostly version of your character is reflected. When you touch the mirror, you enter a state of delirium for a period of time. Delirium completely alters the area you are in, filling it with an expanding mist, altered zone monsters with new abilities, and even new delirium monsters.

“The catch here,” Wilson explained, “is that the difficulty of this and how rewarding the content is scales up a lot as you get farther away from where [you] started. [… ] As you get deeper into the madness, as it were, your mind starts to manifest more crazy stuff.” This includes rare and unique monsters splitting in half and demons popping out of them to attack! Just what is going on in my mind in there?

The delirium state gives players control over their risk vs. reward. “This is allowing the players of course to choose how deep they want to push in terms of the madness,”  Wilson said. “Ideally, maybe they push it a bit too far.”

Wilson emphasized that Delirium is about pushing past the boundaries of PoE’s strengths. As he put it,

“The goal of this expansion is to play into what we think makes Path of Exile great. The first aspect is lots of action combat with risk and reward trade-off. And the second thing is character customization.”

The risk vs. reward trade-off is definitely a focal point of this league, and with the Mirrors of Delirium, it’s certainly packed with action. Each delirium event is a brief window of hard mode; players have to decide how far to proceed. Any content can be affected by Delirium — including boss encounters, previous league events, and even endgame maps — adding an additional layer of difficulty and rewards. (It’s quite different from Breach, which couldn’t stack with existing content or other leagues and couldn’t scale.)

Each Delirium area contains a specific type of random Delirium reward. This could be map items, rare gear, or currency items. Killing enough creatures in the event will grant you one of the items. Progress toward earning one is then reset, and you have to decide if you can push further in and earn another all while the monsters get harder and crazier.

Endgame maps have a special features: In addition to random Delirium events, players can apply Orbs of Delirium to uniformly apply it to the entire map. Additional orbs will increase the density of the mists and the difficulty. Can you make a map that’s too hard to complete? Yes, yes you can. The orbs also set the reward theme. All maps affected by orbs will drop Simulacrum Splinters. One hundred of these are combined into a Simulacrum, the item that enables access to a special new endgame challenge. No, Wilson won’t tell us about it as it is a second endgame battle that wraps up the Delirium story. 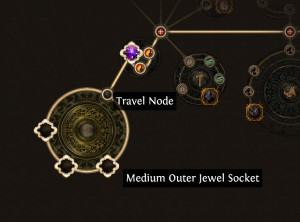 Cream of the character customization crop

Choices start long before stepping through into the mists. Customization was also a big focus here, but not in the usual way. Wilson noted how the team normally offers some options in the way of new builds: “But this time we’re trying some crazy things, possibly the biggest character customization improvements we’ve made in a number of years now.”

One of these new customizations is the all-new delirium cluster jewels. The jewels extend the passive skill tree/bush. Placing this at the edge of the skill tree opens up more skill clusters that can, in turn, have additional sockets to add more cluster jewels! These need to go in descending order, so you cannot put a large cluster jewel in a small one. It goes large to medium to small. All of the notable passives possible on these jewels are custom ones from a pool of 280 new ones. As with other PoE items, you can reroll their properties.

One unique jewel, One With Nothing, adds a build-defining keystone passive called Hollow Palm Technique; this opens up an unarmed monk combat playstyle. Voices, another unique, has no passives but three medium jewel sockets. Another non-cluster jewel, Split Personality, adds more buffs the further you socket it from your class starting point. Here’s Wilson’s take:

“This system here is great from a character diversity point of view. Not only because it gives players so many more things they can do but also because they are dealing with random items. It is very difficult for them to copy each other.”

New skills also allow for more character diversity. Wilson explained that this time around there are no new archetypes. Instead, the devs made skills that they’ve wanted to make for a while without having to bend them to fit something; these can be used by any archetype. “We just wanted to make some cool stuff and not tell the players how to use it,” he told me.

There are four new gems and three new support gems. One skill is Blade Blast. All blade skills in game now leave blades behind, and Blade Blast can explode those discarded blades. Kinetic Bolt is the next revealed skill. This is a boon for those who love wands: It’s a starter skill but scales along with you. It creates a forking bolt that deals physical damage from your wand, with a solid area of effect.

Of the 13 new unique items, four are a gear set themed around the secret villain. You’ve got Perfidy, a melee-focused body armor that allows you to carry two Banners around. There’s also Algor Mortis, which are caster gloves that open up new hybrid cold/lightning build opportunities. The other nine uniques are jewels. 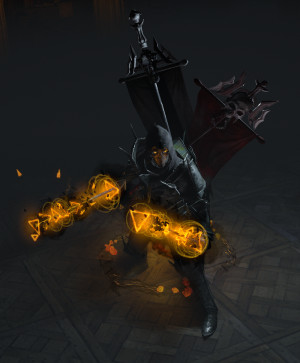 As always, more happens in Path of Exile than just a new league. Wilson announced that players enjoyed the Metamorph league so much more than expected that it is being folded into the core game. I am quite interested to see what a Delirium Metamorph would be like! (So is the Death Counter.)

Additionally, the atlas is getting more work on top of the changes and patches throughout December. In the Delirium expansion, the Conqueror spawning will be changed to be deterministic, and the UI will show how many maps have to be completed in each region before the boss spawns.

In other improvements, Vaal side areas will always spawn as rare, the Temple of Atzoatl will be more dense and rewarding, and a Sextant 3:1 trade-up vendor recipe is being added.

No news is good news for PoE 2

Although I really hoped to get a scoop on the progress of Path of Exile 2, Wilson said things have been going along well but that he didn’t really have enough to share at this point. He explained that progress hit a bit of a block thanks to the Coronavirus; there’s been a few weeks of delay as some contract assets couldn’t be completed when workers had to stay home. However, he did emphasize that new content is fully designed so it can be a part of PoE 2.

While we all wait on PoE 2, we’ll celebrate PoE getting into the top dozen most-played games on Steam again! And that’s only counting half the players, as about 50% of users play through Steam.

Get ready for some insanity in Delirium!