So I did something completely unexpected: I bought Fallout 76. It wasn’t my idea. A few people in my guild had been talking about how much fun it was, especially after the launch of Wastelanders, and my husband wanted to give a spin, and so here we are. It’s been an experience that has been both exactly what I expected (which wasn’t much) and more than what I was expecting.

Let me start with why I hadn’t played up until this point. I have watched the slow moving train-wreck that is Bethesda with misstep after misstep for the better part of two years. From baffling “no NPCs makes it gooder!” to “the nylon bags we bought from the unmarked white van parked around the corner from the office are just as good as canvas,” I wasn’t impressed. It seemed like a hot steaming pile of developer hubris about what gamers really want, and… well, I quite literally wasn’t buying it.

Now that I’ve sunk about 30 hours of played time into the game, has my opinion changed? Yes! Or well, no. Maybe? Let’s walk the wasteland, both metaphorical and virtual, together, and you can see how the opinion of a newbie to the game differs from the earlier impressions of our veteran Fallout writer. 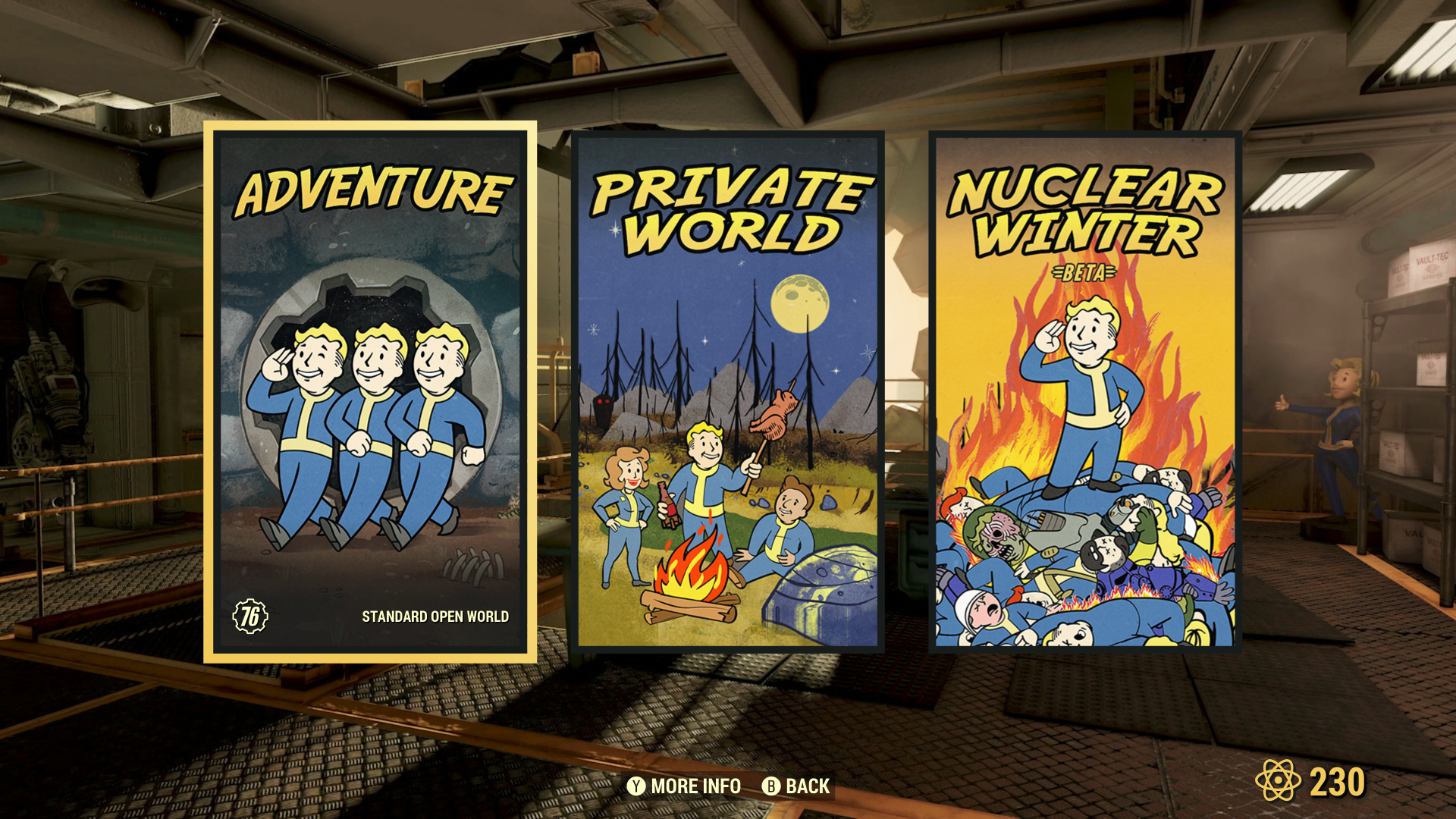 Wow, they really want to make sure you know that there’s an Atom store and that you should buy things from it. Because you can see the menu to log into the game when launching, there’s a wonderful Atom store pop-up that you have to dismiss before you are allowed to log into the game. It’s distracting and a bad introduction to the game, especially if you’re not a fan of obtrusive MMO monetization.

Now, the store does offer free items every week. In the main menu, the Atom Store has a huge “FREE” badge next to it to let you know. But the game doesn’t make the free things easy to find; you have to scroll through everything in the store to find the items that are marked as free. It’s a wonderfully annoying way to make sure I have to look at more crap in the store.

References to the Atom store are peppered throughout the experience. You are never quite left unaware of the fact that you could be spending more money on the game than the $40 you’ve already coughed up.

I spent many of my early hours of the game random shouting profanity at the game – not because the game was hard but because the control scheme for the game is bizarrely terrible. It’s a stitched-together monstrosity of control schemes that would give Mary Shelley nightmares. For example, to get the menu to log out of the game, did you know you need to open the map first, then open the game menu? Or how about to open your friends list, you also have to open the map.

There are, of course, keyboard shortcuts for these things, but they are equally baffling. Instead of the typical “O” for friend’s list as we see in most online games, Fallout 76 will cheekily tell you can open your social menu by hitting Ctrl-Tab. But it will only tell you this after you’ve been invited to group with someone. Up until then, you have to go hunting to find the shortcut. It’s also not especially helpful that the tooltip explaining the shortcut (and the team invite) is on the screen for only a second, so it’s easy to miss the notification altogether. If you check out Game Controls by opening your Map, hitting “Z” for the game Menu, then mousing down to Settings and opening Game Controls – the keyboard shortcut isn’t even mentioned.

Like previous Bethesda games, Fallout 76 makes copious use of the Tab and Space keys when interacting with the game world. But they don’t function consistently. Sometimes you hit Space to interact with something, and sometimes hitting Space cancels the interaction. Sometimes you hit Tab or “E” to interact, and sometimes those keys have different functions. My frustration came in that I was forced to understand how the same keystrokes functioned differently in different contexts with seemingly no rhyme or reason.

This is all old hat to people who’ve been playing the game for a while; they probably don’t even think about the kludge anymore. But it stands out to a newbie. 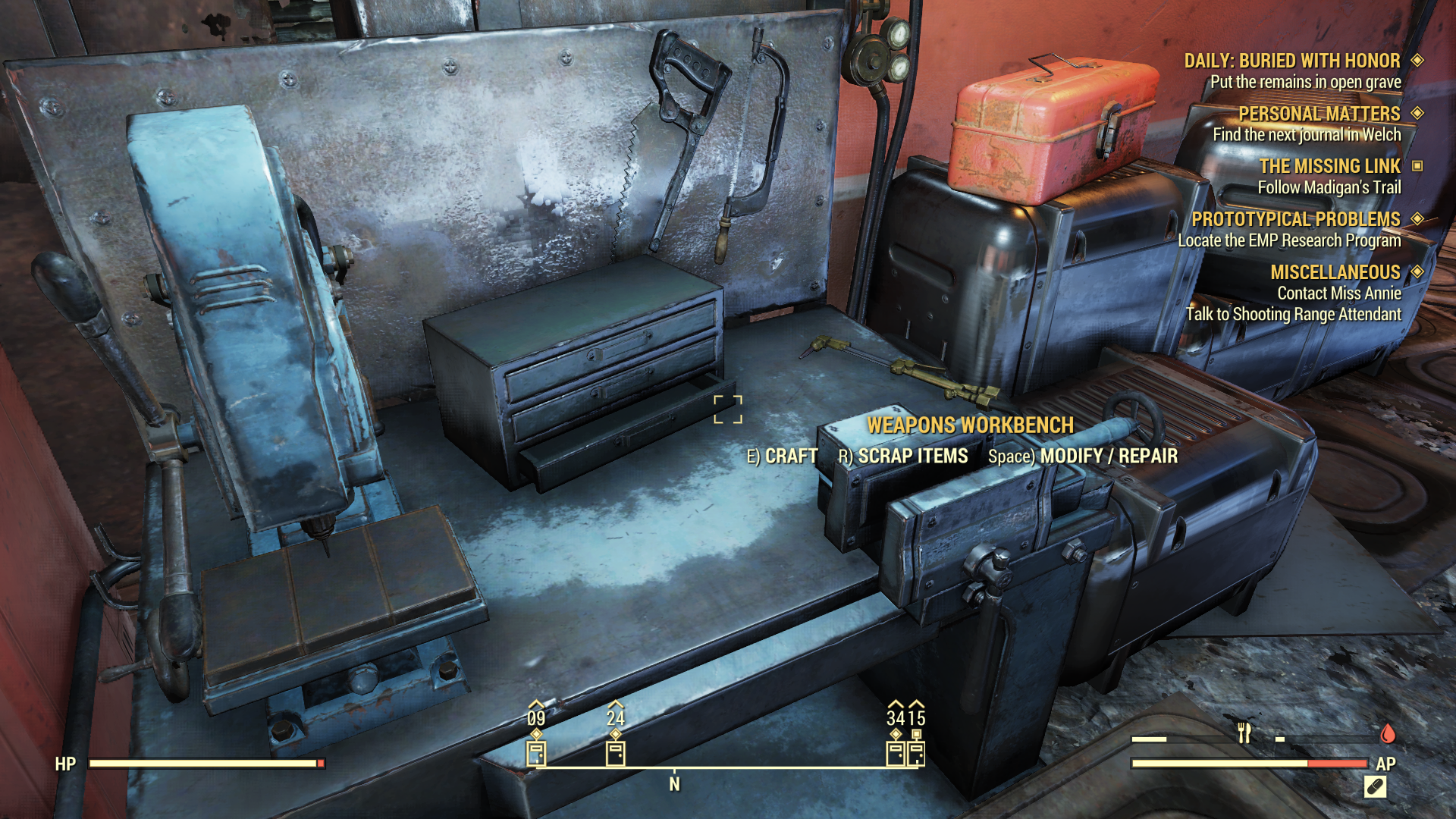 Using the crafting benches is especially messy. You can do several things at a crafting bench: scrap materials, craft new, and repair/modify your items. But there’s a different key to access each of those functions. If you walk up to a crafting bench and accidentally hit the key to craft instead of scrap, you have to completely exit the bench and go back in. The devs have made this slightly better with the Crafting to Modify/Repair, but I think it’s pretty clear you are still exiting and interacting with the bench again; they just automated that one.

User experience monstrosities not withstanding, the game has bugs beyond measure, way more than I would expect for a game that’s been in gamers’ hands for 18 months. Most annoying to me is actually related to the control scheme: Frequently the game ignores where your cursor is. If you are trying to quickly navigate through menus with mouse clicks, the game will periodically decide that what you are mousing over isn’t really want you want and select a different option. I have accidentally scrapped weapons and armor as a result of this, or had to go through the navigation menu of a terminal two or three times.

My husband and I tried two different Events in the game. Both were “Defend X from waves of attacks.” During the first one, we got to the last wave and it wouldn’t complete because there were still mobs for us to kill but we couldn’t find them. Despite the fact that they should have been running at us, we spent about 10 minutes running around trying to find them. Eventually, we discovered them, but in order to get them, one of us had to leave the event area, thereby forfeiting our rewards for doing the event.

During the second event we attempted, the first wave just… never completed. We weren’t able to find any mobs even after exploring for 10 minutes, so we just said screw it and walked away.

Taking screenshots freezes the game for minutes at a time. Mobs will randomly teleport around or not move at all, even when shot or thwacked with something hard. I will say I’ve never seen see mob respawns in the game world, which is a nice atmospheric touch. It seems as if the devs intentionally make them respawn out of the sight of the player. I have, however, had mobs randomly spawn inside my C.A.M.P – invisible, untargetable, but very audible as they destroyed my stuff. Then they randomly pop into existence just in time to start slapping me around.

And yet I don’t hate it

The game is a mess… but it’s a mess I want to play. Despite an infuriating interface, despite the jank, despite unremarkable combat, I’m having fun. I can’t imagine what playing the game before the addition of NPCs was like, but I suspect it would have felt too much like a real wasteland – too empty and too desolate.

While Bethesda’s QA practices are extremely suspect, its storytelling is still some of the best in the industry — the non-verbal storytelling in particular. The game pulls me in because I want to know more about the people who lived here or are living here. Walking into a building and seeing a skeleton fallen over a crib. Walking into a kitchen to find another skeleton with its head in the oven. Walking up to a house to find two teddy bears in front of a checkers board. Walking down a street and seeing mannequins set up in the middle of the road. These scenarios are compelling for me.

I listened to one holo where the NPC was talking about being locked in closet and dying. I find myself almost obsessively trying to find a piece of civilization that’s still functioning as you find the destroyed remains of attempts to carve out a piece of sanity in the world after the bombs dropped. I find myself fighting against the futility of it all as I wander the wasteland. But Fallout 76, and the Fallout universe overall, conveys a heaviness. It’s a critique of rabid nationalism, materialism, and more damningly, a treatise on the ultimate futility of the human condition. Attempts to the make the world a better place will end in failure, with you on a pike outside a raider’s camp or part of super mutant’s meat sack.

We find ourselves in extraordinary times, where an ill-considered tweet (redundant, I know) can make the Fallout universe a whole lot less fantasy and a whole lot more reality, a situation that compounds this heaviness. There’s a kernel of possibility that we could easily end up there that consistently settles into background unease both in the game and not.

All in all, it’s a fun but deeply dysfunctional game. I wasn’t expecting it to be as fun and engaging as it is, but I did expect the asinine bugs throughout and wasn’t let down. Thirty hours into the game, I’ve already got my money’s worth out of the game. Will it hold my attention for another 30 hours? I don’t know. But for right now, I have more stories to find in the wasteland.