Well, there’s one way today’s World of Warcraft’s Q&A session is going to be different at BlizzConline 2021: There is absolutely zero chance that an audience member will be able to interrupt it. This would be because there will be no live questions because the event is all streamed, so all of the questions will definitely be checked ahead of time very clearly.

Whether or not the rest of the various questions answered for this iteration of the game’s annual Q&A will qualify as good news remains to be seen, but we’ll find out together, won’t we? As always, the liveblog will take place down in the comment section, with relevant answers being brought into the main body of the article as we go. The panel is live at 3 p.m. EST. 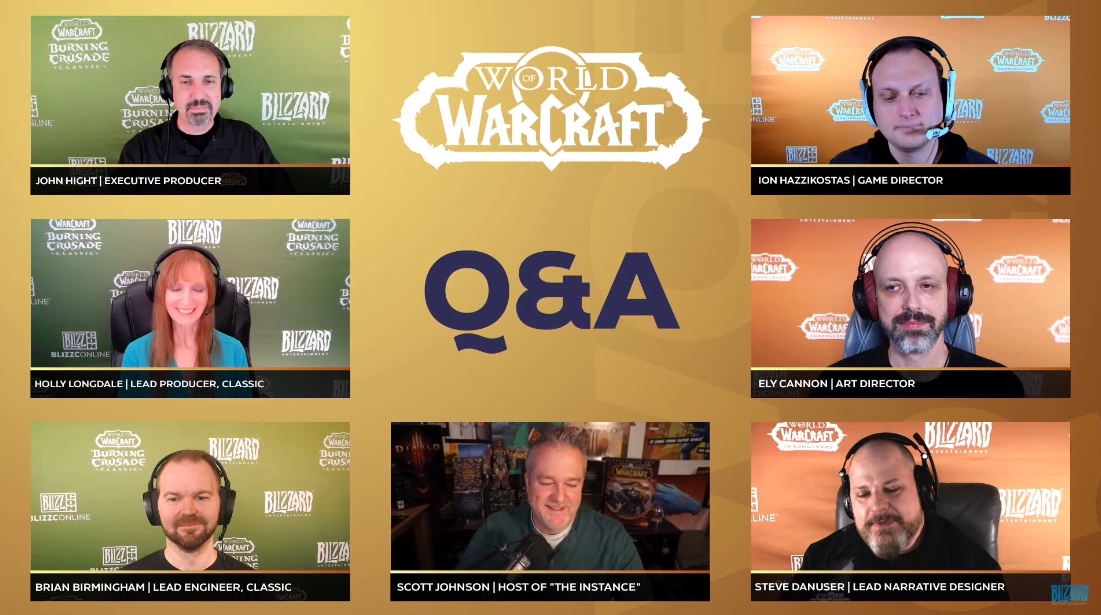 Q: Can you elaborate on the Anduin and Sylvanas story?
A: Very central to the storyline. It culminated with that cliffhanger with Sylvanas and the sword; it’s awesome for BlizzConline to show what happened, and we understand why the Jailer wanted Anduin (to walk into Bastion).

Q: When Anduin walks past Uther, does Uther know what’s happening?
A: On some level, he recognizes that power, and it’s not lost on him that it’s a kingly figure with long blonde hair.

Q: Classic is getting Burning Crusade; when moving while keeping a copy, will I see any differences logging into my two different characters?
A: When you log in at prepatch, the snapshot of that character is right from the prepatch; that’s who moves forward. The choice comes on log in. You’ll have to log in to a separate classic server if you choose to remain on classic. Servers will not change. “We do expect the majority of players” will head to TBC Classic, Longdale says.

Q: How will high population numbers be handled in TBC Classic?
A: To a certain degree, that’s part of the memory; they’re making sure that the servers are stable, but fighting over spawns is part of the game. They will make some targeted changes if there are problem areas.

Q: Will we be receiving more race/class combinations?
A: Customization is important, but differences are also important. They want to have some differences. For now, they think they’ve gone about far enough. No plans in the middle of Shadowlands.

Q: How did the team’s workflow change during the pandemic?
A: Hight says it all happened very suddenly; at first it was just a matter of trying to settle in and work with the tech changes. The most important thing was that the game could connect people and bring people together.

Q: What happened to the Archon? Is she dead or wounded?
A: She’s wounded, but she does survive. Patch 9.1 picks up right in the aftermath.

Q: Do you plan to address the faction imbalance soon?
A: Blizz knows there’s a very real problem especially at the high end. This has been a growing issue. What caused the problem? An imbalance in racials. At this point, the team doesn’t think they’re imbalanced, but social dynamics are what keep people on factions or change. It would take something tremendous to make a massive switch happens. The devs have started asking where the boundaries of “Horde” and “Alliance” lie; it’s important that faction matters, but not at the cost of people’s enjoyment.

Q: Has a swing in faction ever happened for story moments?
A: The team says that across the game as a whole, faction balance is pretty even.

Q: Are there plans to do more realm connections?
A: It was a massive undertaking, especially in 2020. Paused the process when Shadowlands launched because it was a higher priority and it had an effect on realm populations. It’ll be employed as needed, but they don’t want to overuse it.

Q: Horde and Alliance raiding and dungeoning together?
A: Hazzikostas says he’ll never say never. This is a HUGE change from the usual annual answer of “no no no no no no.” The devs think should be able to choose your faction without having to think of guild reasons.

Q: Will our amount of anima be increased later? Can sanctum upgrades be unlocked account-wide?
A: Adding new sources in Chains of Domination, cosmetics themselves are generally account-wide, and the anima progression is meant to last for most of the expansion.

Q: Will we see Sire Denathrius again?
A: Probably at some point they will because he had such a memorable performance in voice acting. The devs pay attention to how well-received NPCs are.

Q: When will we see more heritage armor?
A: Devs are working on the missing armor sets – they will be released over time, some of them in the nearer future.

Q: Will there be more new customization options added during Shadowlands?
A: No. (Sorry, Allied Races.)

Q: Was giving those extra options worth it?
A: Oh, definitely. Community has been very happy about it.

Q: What are the actual requirements to flying, and can we fly from area to area?
A: Pathfinder will only require completing the full covenant campaign; once you’ve done that, you can fly within the shadowlands. You can’t fly from zone to zone.

Q: In TBC classic, will there be class tuning that might be notably different?
A: Broadly, no; devs want the most tuned and correct version of TBC, but they do want to adjust some things like faction imbalance.

Q: Is there work currently be done on new Torgahst anima powers for spec-specific powers?
A: Yes, and new powers will be added and included throughout the expansion’s duration.

Q: Would you ever consider bringing back 10-man content as a different difficulty or instances?
A: Effectively, all raid content is 10-man content. Smaller group with a big adventure is the design goal of megadungeons.

Q: Will summoning stones be available at launch in TBC Classic?
A: Yes, those will be in at launch and the devs say it’ll be a pleasure to bring them back.

Q: What’s Bolvar up to and where is his story going in Shadowlands?
A: He was pivotal in getting people there and starting things up, and he will be front and center through Chains of Domination.

Q: In TBC, how will PvP titles be established?
A: The battlegroups were about technical restrictions, and so a small percentage of people at the top will be awarded the titles.

Q: Can Teldrassil be rebuilt/regrown?
A: The devastation was pretty definitive; the story there is not yet done, however.

Q: Will you open fresh Classic servers in addition to the TBC servers?
A: No fresh start servers now, but they’ve got eyes on it in the future.

Q: Any concerns about layering?
A: Honestly, the focus is on letting people play; better to have layers on to facilitate play for a bit more.

Q: How do you get the wandering ancient mount?
A: It’ll be out next month.

The Stream Team: A very Voltaire AQ3D on Skullpunch Island