I’ll admit it: When EG7 acquired Daybreak back in 2020, I was very dismissive of the report that mentioned a console edition for Lord of the Rings Online. I figured that it was just big talk from a company trying to justify dropping a cool $300 million on an impulse buy near the store checkout.

END_OF_DOCUMENT_TOKEN_TO_BE_REPLACED
But then last month we got EG7’s Q3 2021 investor report, and wouldn’t you know it, but this console thing is still being mentioned as a “mid-term” project for the company alongside a graphics revamp and some sort of user experience update. So I can’t be dismissive any longer — it’s high time we seriously give the idea of a console edition of LOTRO some thought. Is it possible? Is it wise? Is it all just hype and bluster? 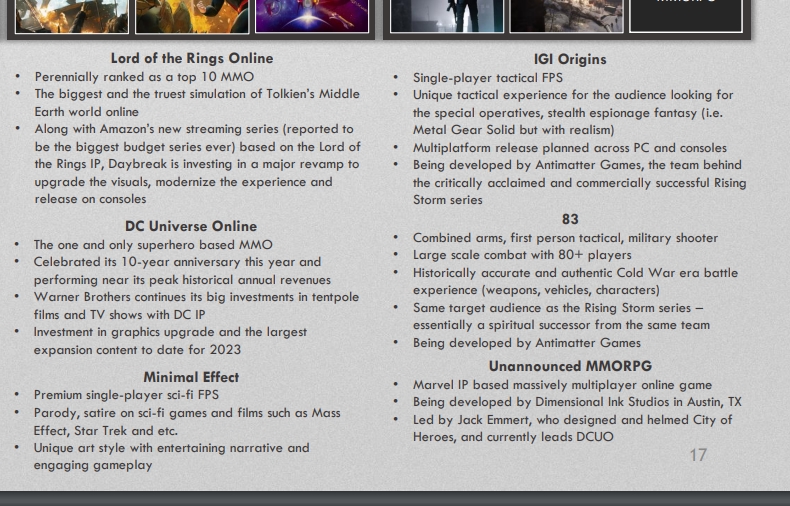 Let’s start by looking at the exact wording from the report, which I’ve reposted there for posterity. POSTerity. Eh, ignore me. After showering LOTRO with sunshine and flowers, EG7 writes, “Along with Amazon’s new streaming series based on the Lord of the Rings IP, Daybreak is investing in a major revamp to upgrade the visuals, modernize the experience, and release on console.”

How I interpret this is, “Amazon is about to make Lord of the Rings a hot IP all over again when it gets its TV series off the ground, and so we feel justified pouring some money into our older MMO based on this IP which, coincidentally, is the only one on the market.”

We then get three initiatives: a “major” visual revamp (which is anyone’s guess, based on how hard it would be to completely redo every art asset in this game), a modernized experience (again, whatever that is), and a release on console. You’ll note that there’s a lack of more specific details, such as what any of this actually represents, what consoles LOTRO would be developed for, a timeframe, and what “investing” means in terms of budget and additional manpower.

Now, this is all EG7 saying this. Standing Stone Games, ever since the transition to the new owners, has been consistently coy about this — neither confirming or denying. Several times on livestreams, SSG representatives will carefully say things like, “Well, that’s what they’re posting, and we can’t comment on it. But here’s what we’re doing in the game right now…”

If this is a real thing in the works, then next year’s Producer’s Letter would be an ideal time to confirm this from the studio’s standpoint. Otherwise, we’re left with the owners saying that this is the case without the studio backing them up for whatever reason.

The idea of Daybreak investing more in LOTRO rings true to me, at least. We’ve seen the hiring of a producer and engineers, job postings for more positions, and mentions from the executive producer how better server tech is being (or has been) purchased. Then on page 7 of the EG7 report, we get this mention under the summary for MechWarrior 5’s Piranha: “In Q4 2021, as the team further ramps down on MechWarrior 5, the plan is to fully utilize Piranha’s talented team to staff various key projects for the group such as the Lord of the Rings Online update.”

To put myself out on a very long limb, something is happening for LOTRO. Yup. I feel comfortable saying that.

Focusing on the topic of a possible console edition of the game, my mind goes back to a lot of the concerns that I had last year. This MMO is on an older framework that wasn’t designed from the ground-up to be compatible with consoles (compared to, say, FFXIV or ESO), so it’ll have to be adapted. It may be too old to work on a console, period. It’ll need some sort of controller support that it doesn’t have and a way to reduce a complex and fiddly UI to some analogue sticks and a handful of buttons.

This is where I figure that the “modernize the experience” part comes in. My working theory here is that all three of those items that EG7 listed are part of one interconnected project — a project to bring LOTRO up to form visually and in its UI so that it can be put out on console without being a hot disaster.

The user interface is very creaky at this point that could use an overhaul. And in fact, Standing Stone Games has confirmed that some sort of UI work is in the pipeline, so that tracks. If we see this actually happen, especially in a way that would allow for controller support, then I’ll move past “extreme skepticism” to “grudging attention.”

Please note that I, personally, have nothing against bringing LOTRO to consoles, provided that it was done in a way that wouldn’t get SSG and the game laughed out of town. Sure, theoretically, it could be a boon to the game, especially if it can be done in time to capitalize on the Amazon series. A new wave of players could benefit the game as a whole, but you’d want to remove as many of the significant obstacles to them sticking around as possible — obstacles such as a messy business model, aging visuals, and a not-quite-intuitive UI.

So bring it on, EG7 and Daybreak. I love this game and am not going to fight you if you want to dump money into making it better and widening its audience. I have no idea how huge of a project this would be, but I suspect it’s rather substantial, so there would be a substantial expectation for a good return on that investment.

At the end of the current day, however, there are far too many questions and far too little communication about this subject to draw any firm conclusions. That won’t stop us from speculating about a future where you could pick up LOTRO on Switch, Xbox, or PlayStation, will it?