MMO twitter has been ablaze since yesterday’s announcement that Daybreak is being bought up in its entirety by Swedish games company Enad Global 7, largely thanks to the huge swath of information EG7 is offering to investors on Daybreak, a company that has been notoriously tight-lipped about its plans to the point that it actually misled everyone about who owned it for three years and then tried to cover it up afterward. So let’s dig into the most interesting bits of the presentation, shall we?

Daybreak’s Jack Emmert is the big boss at Standing Stone Games. We knew Emmert was top dog at Dimensional Ink, which is working on both DC Universe Online and another unnamed MMO, but now we know that he’s also at least nominally in charge of SSG and its titles, Lord of the Rings Online and Dungeons and Dragons Online. Yesterday, EG7 confirmed that Daybreak owns SSG and its licenses, something gamers had long assumed was true but didn’t know for sure (again, Daybreak is notoriously tight-lipped about pretty much everything). And that’s not a new move; EG7’s timeline says the acquisition happened back in 2016, the same year Daybreak and SSG led everyone to believe that it was just a publishing changeover. So, if you’re wondering who’s ultimately responsible for SSG’s poor communication issues this year, well, look to the top. (TAGN’s Wilhelm noticed that DI and SSG are nested under Darkpaw, which is nested alongside Rogue Planet, all of them under Daybreak.)

DC Universe Online really is Daybreak’s biggest game. We’ve long suspected it, but now we know for sure: DCUO claims 419,000 monthly actives. Intriguingly, less than a tenth of those subscribe, very different from the EverQuest franchise. We’re assuming this is down to the fact that DCUO is on console, where it thrives. It brought in over $26M this year. 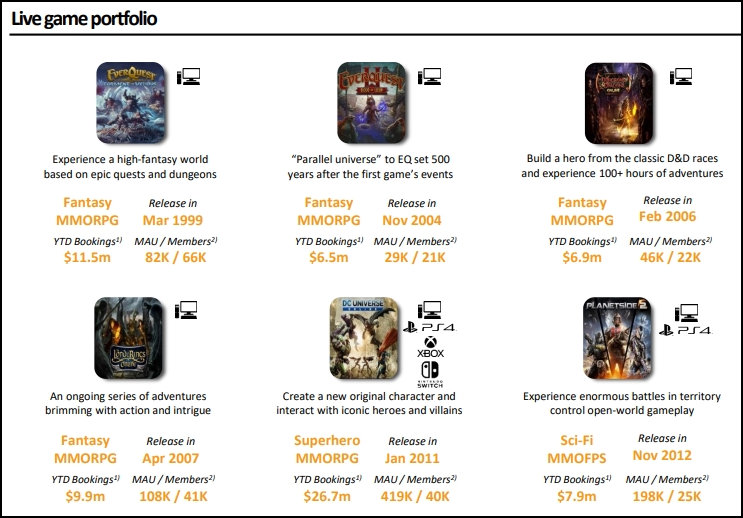 Lord of the Rings Online and Dungeons and Dragons Online are no slouches either. In the middle of the pack for players and revenue are the Standing Stone titles. In fact, by subs alone, LOTRO’s near the top of Daybreak’s pile, and by monthly active players, it’s the studio’s third-biggest playerbase, with 108,000 monthly actives, 41,000 of whom subscribe for annual bookings of almost $10M. DDO is smaller, with 46,000 MAUs, half of whom sub for nearly $7M bookings in the last year.

Lord of the Rings Online might be coming to console. One investor slide specifically references “planning visual and technical updates for LOTRO for PC and nextgen consoles to capitalize on Amazon’s highly publicized large investment (~$500m) in LOTR TV series.” Even if this doesn’t happen, it’s a really good sign that LOTRO is in it for the long haul and won’t be letting the TV show go to waste.

DCUO is seemingly being made ready for next-gen consoles too. EG7 mention its plan to “modernize visuals, upgrade key game systems and add brand new large content update to capitalize on the nextgen consoles growth cycle for significant growth opportunity.”

Daybreak’s license agreement with Marvel isn’t dead. Back in 2018, Daybreak laid off a significant number of developers involved in a secret game with a major IP. At the time, our sources were able to tell us what it was but didn’t want it revealed, but Reddit eventually leaked it all anyway, confirming what we already knew: that it was a multiplayer Marvel title. EG7, however, says that Daybreak still has the “license agreement with Marvel.” Of course, how long it lasts and whether anyone is going to do anything with it now is another story.

Yes, Daybreak is still working on other titles. We knew Dimensional Ink was working on an unnamed title, and EverQuest franchise reps have been hinting about a new title in that line almost since the minute EverQuest Next went kaput. EG7 doesn’t shed much light on any of these, though, simply referencing a single “unannounced project.”

So who the heck is EG7? From our digging last week after the Piranha acquisition, we learned it’s a Swedish conglom of games companies. Several of the C-suite execs are from Petrol, which appears to focus largely on games marketing. It talks up its “rapid growth” and goals of both developing and publishing games with a “buy-and-build strategy,” so at least superficially it doesn’t appear to be the kind of company that buys other companies merely to hollow them out and resell or discard them. Daybreak has essentially doubled EG7’s holdings.

Daybreak counts 178,000,000 total registered users. We’ve never gotten numbers like this about Daybreak until yesterday. Of course, it’s unclear how many of those players are still around, or whether that’s an accounting of game accounts or core accounts (I mean, I’d be like 10 of those if it’s by game). Overall, it’s reporting around $666M SEK ($78.5M US) in revenue for 2020 to date.

What about H1Z1? EG7 mentions it several times as one of Daybreak’s original IPs, but it isn’t being reported here for its revenues or assets. As MMO players will recall, Daybreak already had an arrangement with investor NantG a few years back to develop and distribute various versions of H1Z1, as well as mobile versions of EverQuest and esports arena. None of those extra bits are mentioned in this report, nor is any entanglement with NantG. To our knowledge, Daybreak is still operating at least the PC version (called Z1 Battle Royale), though it’s effectively in maintenance mode. We’re not entirely sure who owns the console version H1Z1 right now, as it’s listed as an IP but not included in the games portfolio, but it’s at least still being updated.

It’s also not clear what’s going on with Cold Iron Studios. Cold Iron, staffed and led by former Cryptic devs who rubbed elbows with Jack Emmert way back when, was bought up by Daybreak this past summer. The studio reportedly had 40 devs working on an Alien MMO-turned-shooter and reported directly to Daybreak’s CEO. Neither the studio nor the Alien game (or its IP) are mentioned in the press release or investor report, however, so we don’t know what’s up there. (Thanks to GreaterDivinity for reminding us of this!)

There are a few head-scratchers in the presentation. EG7 tells investors…

All in all, we’re in agreement with MMO Fallout on this one:

Have a look through the key slides yourself: