ArenaNet has just dropped a press release and dev blog full of good news for Guild Wars 2 and its players. Let’s go over the highlights!

Guild Wars 2 is thriving thanks to End of Dragons. ArenaNet says its active playerbase has “more than doubled over the last two years,” and End of Dragons has now outsold Path of Fire. While these aren’t exactly hard numbers, they’re probably not a surprise given Guild Wars 2’s ever-sweetening revenues and living world return events over the last year.

Guild Wars 2 will see another expansion. End of Dragons is not the end; a fourth one is happening. In the meantime, the team is working on “the next story update for Guild Wars 2, including a new map set in the Cantha region.” The studio admits this is an extremely early tease for the expansion, “so don’t expect news anytime soon.”

Living world season 1 is coming back in 2022. Yes, we said season 1. The studio is turning that ephemeral season into five permanent episodes that’ll roll out over the course of 2022. “Our goal is to provide a cohesive bridge between the personal story and Living World Season 2 and give players the opportunity to earn many of the legacy achievements and rewards that have been unavailable all these years,” ArenaNet says. Flame and Frost will release on April 19th, with the season concluding with a new strike and challenge mode in Battle for Lion’s Arch.

The Steam launch is still happening. You’ll recall that Steam was meant to happen in 2020 but got held back in favor of work on End of Dragons. Steam is back in the cards now; the team is hoping to make it happen this year but won’t commit to a date. Likewise, the team is “working on getting DirectX11 ready to exit beta.”

WvW revitalization is still a priority. The team is still “working on addressing population balance” with WvW and will be returning to running restructuring betas as well as addressing core systems, balance, and rewards.

Expect better comms and regular updates. ArenaNet says it’ll publish “regular” state-of-the-game blogs and “quarterly” profession updates as classes and specs are becoming a higher priority for the studio. “We’ll be releasing some PvP and WvW balance changes in the March 29 update, and our first major profession update will drop on June 28.”

ArenaNet has clarified its leadership structure. Studio Directors John Taylor and Colin Johanson have reintroduced Amy Liu as Executive Producer and Josh “Grouch” Davis as Game Director, indicating Liu and Davis will be interfacing with the public from here on out – which they do immediately when running down the game’s priorities.

“First, we need to prioritize delivering consistent updates for our players. The release of End of Dragons and the resolution of a story arc that was 10 years in the making feels like a fitting time to reevaluate the overall Guild Wars 2 experience specifically, how we provide regular content updates to our players and what those updates contain. This means continuing to tell compelling stories that expand the world of Tyria while providing a better experience for those who enjoy game modes such as World vs. World, Player vs. Player, and endgame group content. Second, it’s important that our plans allow our team to maintain a healthy work/life balance. We’ve always believed that our top priority is the health and well-being of our employees, and we’re more committed to that now than ever. This will help ensure that the exceptional team behind the End of Dragons expansion will continue to be happy at ArenaNet for years to come. Our work on this front will largely be invisible to you and will mostly focus on improving our planning and day-to-day development processes.”

“While the end of the Elder Dragon cycle might seem like a natural moment to start winding things down, we’re happy to say loudly and emphatically that Guild Wars 2 has a bright future ahead of it,” Johanson and Taylor say.

Finally, and because you’re probably wondering, yes, Super Adventure Box is happening. We’ve got hard dates for some of these along with the pretty roadmap: 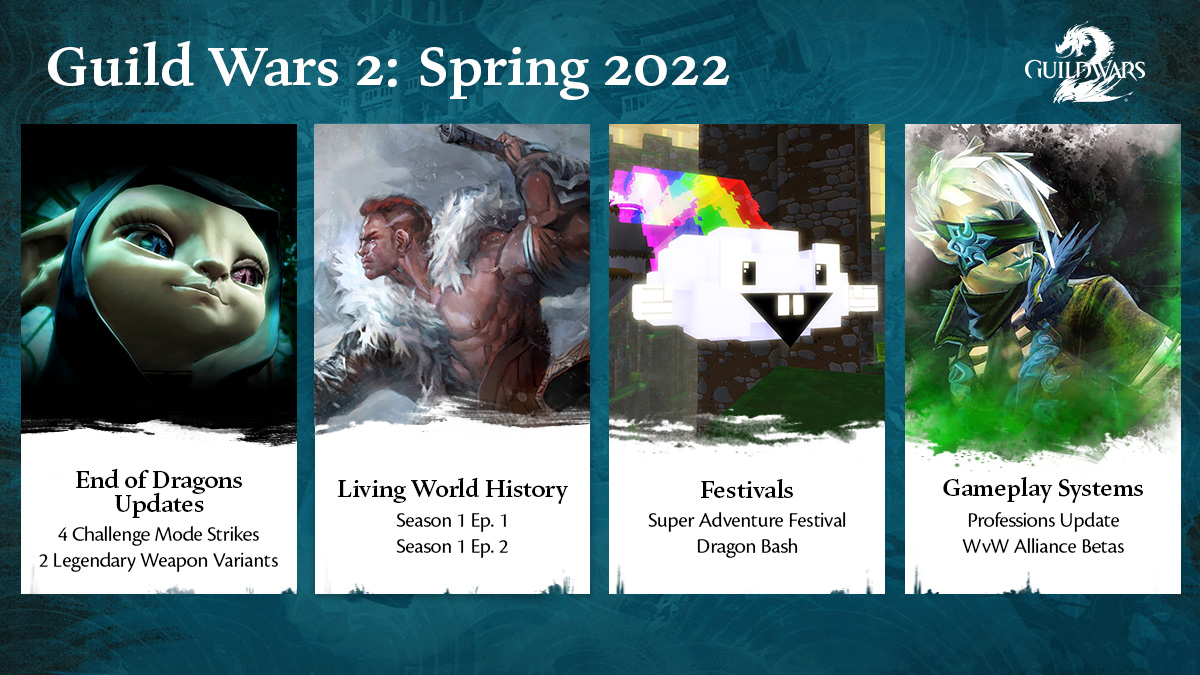