Mirror of Kalandra. Path of Exile players know this is a super rare currency item that has been in the game since the beginning. This can be used to create a mirrored duplicate of equipment, items, or even maps. But players haven’t known anything about who or what Kalandra is. That question will be answered in the next PoE expansion: Lake of Kalandra. And players won’t have to wait long for all the answers as Lake of Kalandra launches next week on August 19th for PC. (Sorry, Xbox and Playstation players, you have another week to wait as the console launch is August 24th.)

Luckily, we don’t have to wait for information on the expansion as today’s livestream reveal offered a look at what players can expect in the expansion and its accompanying league. Grinding Gear Games’ Chris Wilson shared details on the Kalandra league, endgame improvements, balance changes, and new items, skills, and support gems as well as explained how three previous leagues has been revamped into the game. During a press preview ahead of the stream, Wilson added a few more tidbits of info we’ve collected here in Wandering Wraeclast this afternoon. Read on to learn more and watch the Lake of Kalandra trailer. And if you’ve missed the stream, we’ve included the full vod to check out!

Though the Mirror of Kalandra itself is, as Wilson put it, “obnoxiously rare,” and 99.999% of Exile players will never have seen one before, everyone can experience the mirror effect on a large scale in the Kalandra League. The league takes place at the namesake of the famous mirror, which happens to be Lake of Kalandra. And yes, there is a Kalandra herself, but you won’t learn about her and her motivations until you play through the league!

The lake itself is a mirror, but instead of mirroring items, it reflects entire encounters from Wraeclast. Wilson noted that these encounters can be hordes of monsters, extremely powerful foes, or even league content. Players should not be surprised to run into the Harbinger boss. While playing through the league, players will occasionally come across pillars protruding from the ground with a mirrored tablet resting upon the top. This will be their access to the Lake of Kalandra experience.

In keeping with Grinding Gear Games’ focus on giving folks ways to customize their experience, the league offers the ability to design their lake-encounter layout. Using the tablet on the pillars, players will construct a custom set of encounters at the Lake of Kalandra by moving or even swapping the various tiles (entrance, reflections, and water) on the tablet. The further an encounter tile is from the entrance, the harder it will be — and the better rewards it will have. Each additional encounter tile away from the entrance adds one to the difficulty counter.

What if you don’t like what is offered on the tablet? While progressing through the league, players will be able to unlock special abilities that will grant the power to manipulate the options, including skipping, rerolling the list of options, and even exile a choice completely so it will never appear again. Once players reach maps, they can itemize their mirrored tablets so that they can not only be saved to play later but be traded to others.

The rewards in the Kalandra League depend on what encounter is reflected. An encounter based on a past league grants the rewards from that league, while those that aren’t related to past leagues generally yield a reward chest that rises out of the Lake after the encounter is completed. Certain reflections, however, grant players access to a  new variation on rare items exclusive to this league. Completing the encounter grants access to some reflecting mist. This mist generates a rare ring or amulet with an unusual set of mods (some are very high and beneficial, and some are very negative and harmful) as well as a reflected copy having inverse mods (negative ones are now positive, and vice versa). Players have to make the choice of which item to take. As Wilson noted:

“It’ll often be a tough choice, with each item having its own strong pros and cons. But sometimes, you’ll be offered an item where the negative mods aren’t downsides for your build, and the juiced up positive mods are very attractive. There are also some special new jewelry base types that you can rarely receive from this process.” 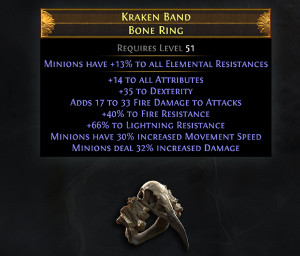 On top of this, one rare and difficult encounter will actually reward players with an advanced version of this crafting process that allows them to make a mirrored copy of their own ring or amulet. Will players gamble some of their best jewelry to try to double the values that really matter to their build and negate the ones they don’t care about? The final reward is for the very lucky: a special league-exclusive unique ring Kalandra’s Touch that mirrors the effect of your other ring.

For those curious about the endgame, Wilson’s announcement that there will be improvements of new content and new ways to customize the endgame experience in every expansion leading up to Path of Exile 2’s release is a welcome one.

In this expansion, GGG is introducing Atlas Memories to everyone as a core feature; there’s no waiting until the league ends. Wilson shared with us that the Atlas Memories system has quite a large amount of endgame content and brings more variety to players. And those who love lore will get to expand on the backstories of the NPCs!

In these rare memories of NPCs, players will live through a special experience certain NPCs had while they were exploring maps themselves. For example, one memory item is Niko’s experience with a series of maps that were entirely consumed by permanent Breaches, like a Breachlord’s Domain. In another, Kirac stumbled into the staging ground for the Harbinger invasion of Wraeclast. Each memory will run over four to five maps, in effect giving players a number of bonus maps to run for the price of one, Wilson also said that devs intend to launch with 20 memories, and if it is popular, more can be added in the future. In fact, the GGG devs already have ideas for as many as 50.

In addition to Atlas Memories, Lake of Kalandra introduces a new unique map, and it brings back the Trialmaster from Ultimatum — as well as the uniques he drops. The map, called The Tower of Ordeals, can be created by completing difficult endgame Vaal content.

As any Path of Exile fan knows, GGG gives plenty of information with each reveal, and this isn’t all there is! Tomorrow, we’ll dive into the rebalancing efforts and the revamp of three previous leagues that will also be included with Lake of Kalandra.