Our March sampler-platter edition of Choose My Adventure is quickly coming to a close. There’s only one more vote to take, one more game to play, and one more character to create. Our task this week, as with previous weeks, is two-fold. First, we must talk about Marvel Heroes, (spoiler alert: awesome). Second, we must choose a path for our Torchlight II hero. It’s a big responsibility, but I think we’re up for it.

So join me, CMA-ers, on this last round of OARPG voting. Dungeon time is almost over.

Here’s how I imagine the pitch meeting for Marvel Heroes, which is currently named Marvel Heroes 2015: “Hey, what if we took Diablo III and made it enjoyable? Oh, and Captain America is there.” Gazillion Entertainment’s design philosophy with Marvel Heroes is one that more developers, especially free-to-play developers, should jump on. Marvel Heroes doesn’t bog you down with tutorials, drag you through long, scripted encounters, or hide your cool powers away for some 20-hour level unlock. Instead, it’s just fun. Immediately. Install game; have fun. 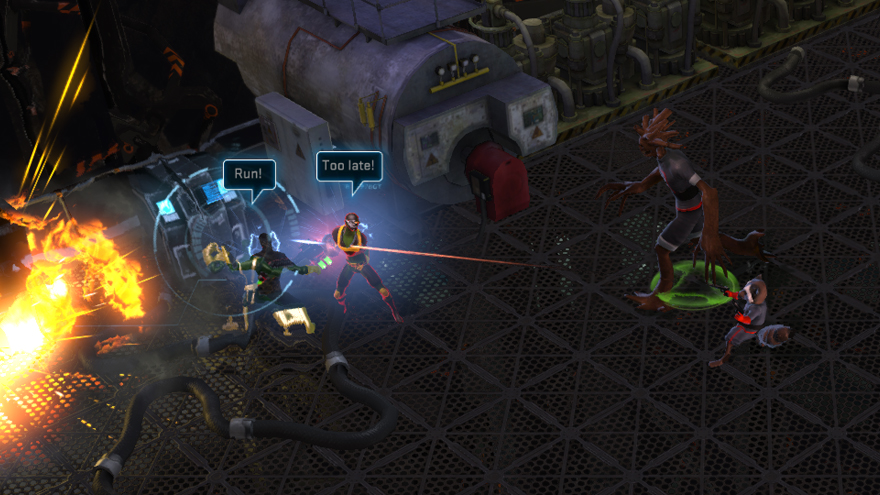 When our voters selected Rocket Raccoon as our starting character, I was wary. Is it just Guardians of the Galaxy hype controlling the vote? Are voters, as they have done in the past, just trolling me into a terrible class choice? After spending a few hours hanging out with Rocket, I think the answer to both questions is a resounding no. Rocket Raccoon is a stellar hero. His abilities are pure joy. Let’s catalogue some of the things I was able to do just upon reaching level 10:

Rocket Raccoon is a three-part hero. There’s the raccoon part, which dashes across the screen and blasts enemies with a laser pistol. There’s the technological part, which creates stationary turrets that pump out massive damage while slowing enemies and projectile attacks. And then there’s Groot, who runs around next to Rocket and generally smashes anything that gets close to him. Have I mentioned that Marvel Heroes is fun? It’s fun. 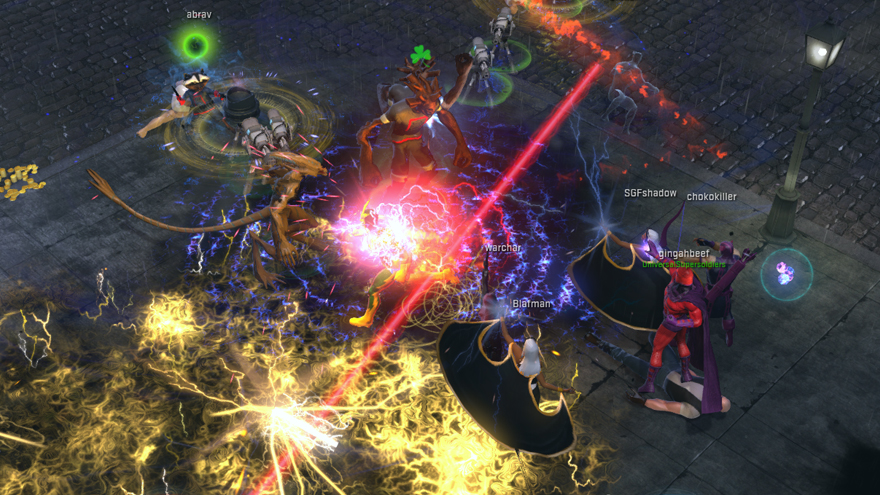 It’s also fast-paced. You level quickly. The game throws huge piles of enemies your way — enemies that are constantly changing based on whichever supervillain is causing a ruckus. In one scenario you’re laying out Hydra henchmen; in the next it’s symbiote-afflicted civilians. In the first couple of hours you’ll face off with Black Cat, Electro, Green Goblin, Living Laser, and more. If you’re a fan of the Marvel universe, it’s basically real-time fan service.

If you’re a fan of the Marvel universe, it’s basically real-time fan service.
Marvel Heroes‘ first open world comes in the form of Hell’s Kitchen, turf of lawyer/vigilante Matt Murdock (aka Daredevil). Live events pop up here and there, with you and a bunch of other low-level heroes crashing through foes, accidentally blowing up cars, and generally wreaking havoc on evildoers. You’ll find little missions that task you with entering a building and clearing it out, taking care of a few nasty henchman, or tracking down and defeating a more high-profile foe. You can pop back to the game’s hub (Avengers Tower, if I remember correctly) at any time. 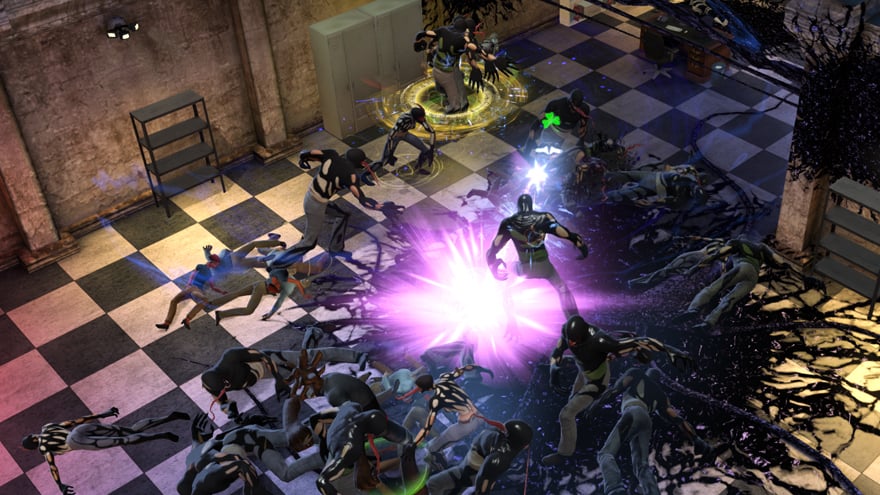 The short timetable of this month’s CMA means I won’t get to explore Marvel Heroes much further, but I had a blast with what I saw. The skill unlocks come at such a rapid pace that it’s hard to keep track of them. Villains are varied enough to avoid being boring cannon fodder. The voice acting is adorable, the plots comic book-ish, and the attention to Marvel lovers apparent. It’s a little weird to see three Human Torches running around setting things on fire, but with online games and a limited starting roster, I suppose some forgiveness is necessary.

I’m also a fan of the initial character unlock system, which allows you to play any of the starting heroes to level 10 before determining which one you’d like to unlock for further play. That’s a substantial amount of playtime before making any sort of real commitment, and the initial unlock doesn’t cost you anything. I went ahead and unlocked Rocket Raccoon since we’ll be featuring him in-stream later this week. 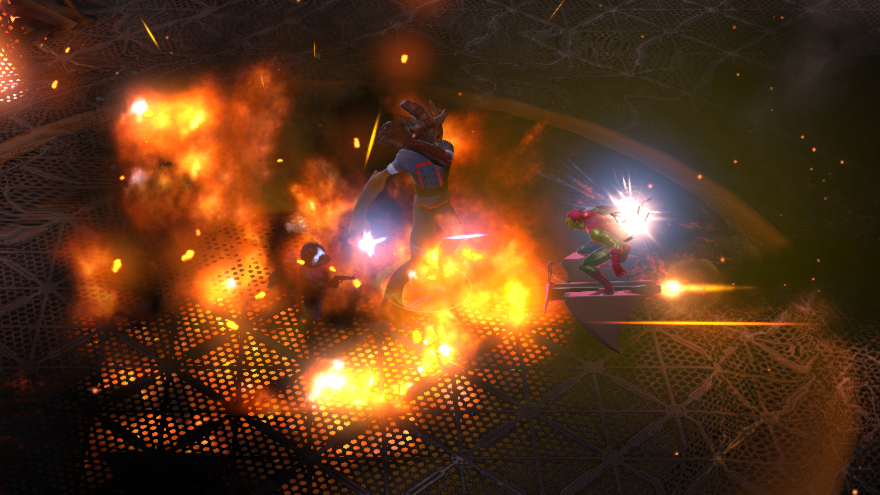 All in all, Marvel Heroes was an exciting, happy break from the dark, gross dungeons we’ve been living in since the start of the month.

Torchlight on its way

Next up in the OARPGCMA spectacular is Torchlight II. This one, unlike the others this month, I have experience with. Developed by Runic Games, the Torchlight series is a dungeon crawler along the lines of Diablo III and Path of Exile. It’s a little bit brighter in color palette and to me feels less serious, but otherwise the genre cues are all there. Waves of enemies, point and click destruction, and lots of loot. 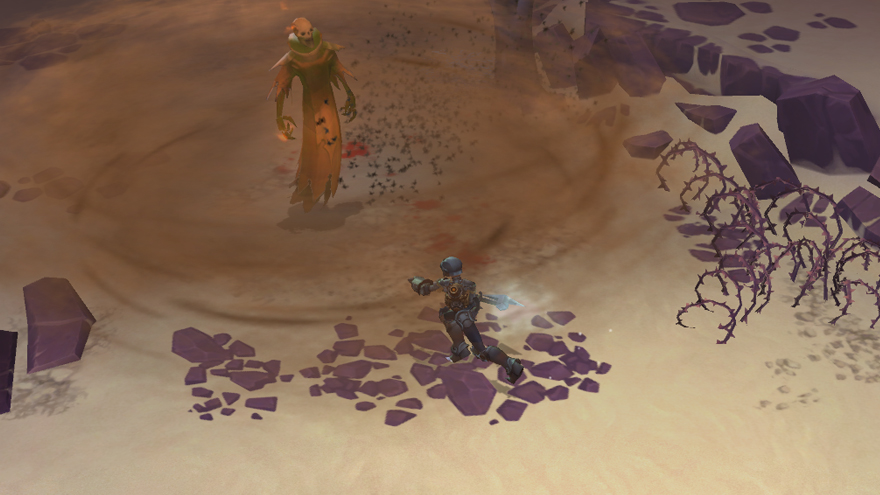 Our first and most important step is choosing one of Torchlight II’s four player classes. They fit into the familiar archetypes: Embermages are spell casters, Engineers are tankish, Berserkers are melee DPS, and Outlanders are ranged damage dealers:

CMA: Pick a class, any class.

Loading ...
Torchlight also lets us choose our gender, so let’s get that one handled:

Loading ...
And, most importantly (to me, anyway), Torchlight II gives us a pet that helps in battle. All pets are the same in terms of stats/abilities; this choice is purely cosmetic: