OARPGs on the whole aren’t known for their sunshine-and-roses atmospheres. Most involve dank dungeons, gloomy graveyards, and other alliterative environmental tropes. With Path of Exile, the team at Grinding Gear Games has set a new bar when it comes to grim. Until this weekend, I’m quite confident I’d never looted a crucified corpse.

But hey, that’s the trip we signed up for when we made this month’s CMA all about the dungeon crawls. So let’s get to it.

All of the gems

Path of Exile starts by dumping you half naked on a beach. Your first actions as a character are to pull yourself up out of the mud, grab a weapon, and get to fighting. Make your way across the shabby terrain by carving a path through hordes of undead and cannibals and you’ll eventually find a tiny little town/quest hub where you can begin your adventure in earnest. It’s in this town that you’ll first see other players running about and access typical OARPG things like your stash. 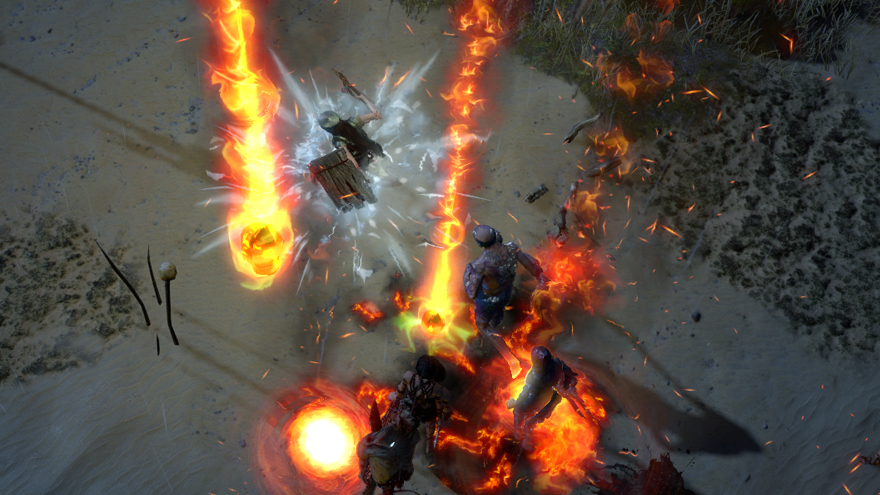 Voters last week sent me on the path of the Witch, a ranged damage-dealer who uses offensive and defensive magic spells. In the first few moments, the class isn’t all that interesting. Left-click fires off your one attack; simply point and click until the things in front of you fall. But Path of Exile’s skill system is wonderfully designed, and things quickly become more fun and more complicated. You aren’t simply awarded spells for leveling up, nor do you follow some sort of established progression from one spell to the next. Instead, spells come from gems that you socket into your weapon.

You can find gems out in the wild or receive them from quests. Which gems you use is entirely up to you, as long as your weapon has the right gem slots available. By the end of my time with Path of Exile, I had discovered a gem that created fire traps on the ground, one that threw slowing frost blasts through groups of enemies, one that was a more typical fireball-type spell, and more. Gems level up independently of your character and provide you with a really interesting way to customize your gameplay — just because I’m a Witch and you’re a Witch doesn’t mean we’re doing the same stuff. 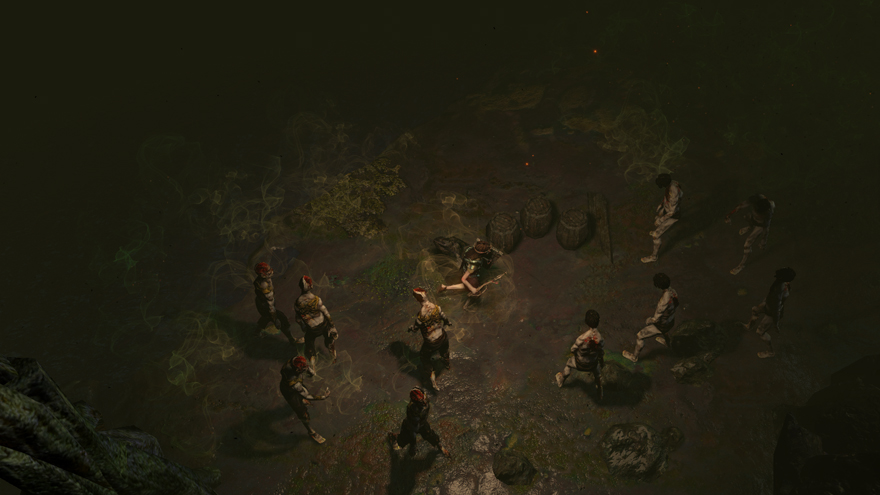 Skills are augmented by Path of Exile’s absurdly deep passive talent tree. As in other games, skill points are allotted to you as you level, and you spend those points on enhancing your character. But unlike other games, Path of Exile has talent trees that are all connected to one another, meaning you can eventually work your way over to passive enhancements that may not necessarily benefit your actual class. The result is an open, flexible approach to character building that leaves you free to experiment. 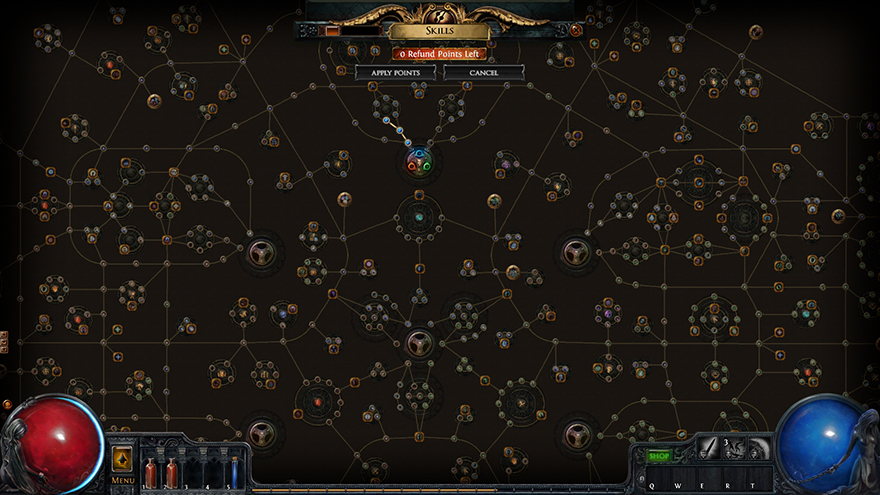 Path of Exile gets you to the action very quickly. It doesn’t teach you skills with scripted story encounters; instead, it throws huge packs of mobs your way regardless of whether you feel ready. Path of Exile is super-dark and a little mean, and it makes no effort to apologize to the player for either. I can understand why the game is doing so well: There’s vast depth in character builds, challenging encounters everywhere you look, and an utterly beautiful but ultra-sad world to explore. It’s as if Dark Souls and Diablo had a baby. 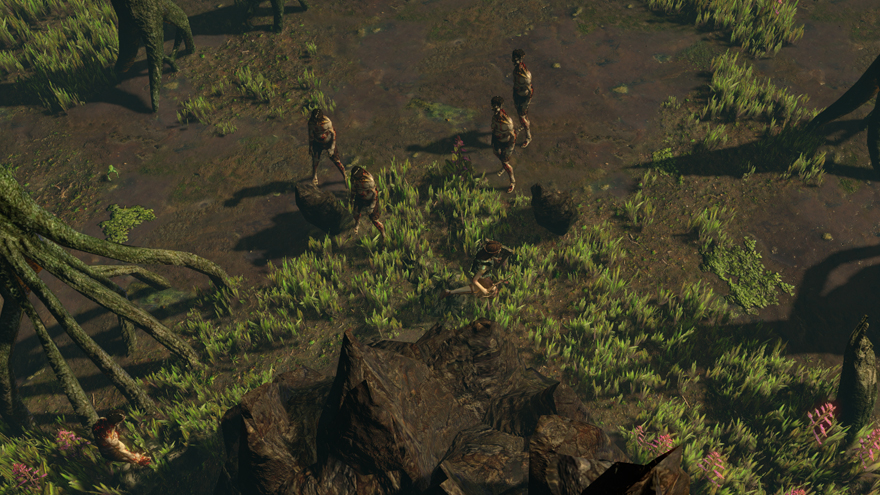 I hesitate to compare Diablo and Path of Exile directly. With such limited time to explore, it’s hard to say one is “better” or “harder.” What I can say is that Path of Exile, being free-to-play and offering immense depth almost immediately, does a better job of selling its vision. If I had to choose one to keep playing, Path of Exile would be the easy winner based on the early game experience.

I mean, geez. Did you see that talent tree!?

We’re halfway through our OARPG CMA. Diablo III and Path of Exile are done and gone. Next, we take on some slightly lighter fare with Gazillion Entertainment’s Marvel Heroes 2015. I’ve never played Marvel Heroes, but I do know that practically everyone on the MassivelyOP team (and in our comments section) is obsessed with it. For the unfamiliar, Marvel Heroes is an OARPG that puts you in the role of a famous Marvel comic book character and tasks you with saving the world, one click at a time. 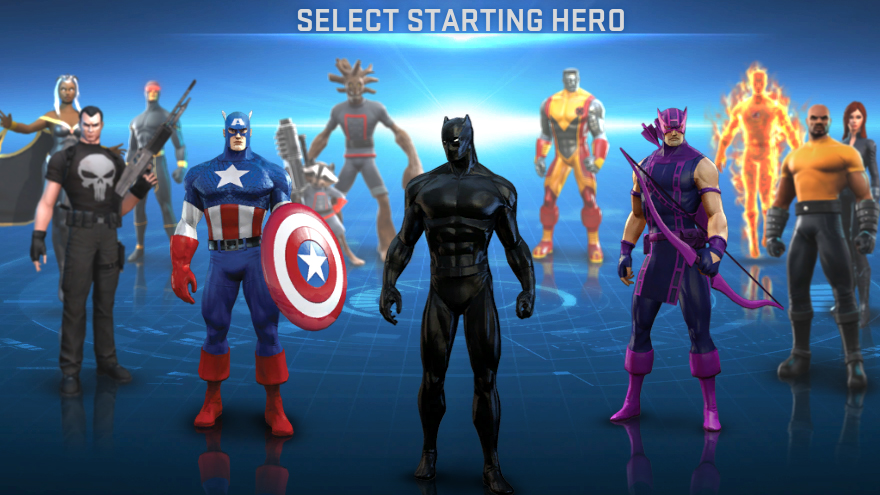 There’s not too much to decide in this one considering the heroes are fairly established. But we do have to at least choose a starting hero before we can begin!

Loading ...
And that’s that! Get your votes in by Friday, March 20th, at 11:59 p.m. EDT if you want them to count! Don’t forget to check the Stream Team schedule for an idea of when we’ll be playing the game.

Catch you in the multi-verse!