In the first part of my Skyforge closed beta impressions, I took a look at the tutorial and character creation process. Suitably impressed albeit with some concerns, I advanced into the game proper by heading to the Divine Observatory.

The Observatory is sort of the headquarters for all of the immortals in the game. I’m informed that while I’m technically a god, I’m not almighty and will have to work for my pay. I can do that by answering distress calls (prayers?) from people around the planet, which is as good an excuse as any to zone-hop and test out my newfound skills.

My first combat mission assigned me to Dankit Island, a pretty enough location with a neat monorail line running through. Before I got too deeply into the quest, I fiddled around more with the interface and combat controls.

Let me give Skyforge some credit here: The UI is a slick piece of work. It’s fairly minimal, all things considered, and puts on the screen only what it absolutely needs to for the moment. You’re not going to have tons of hotbars of skills in this game; Skyforge takes the “limited skillset” approach to MMO design, keeping your combat options at just a handful at any given time. What I really appreciated is how the quests would automatically update on the tracker, allow you to quickly grab rewards, and then they disappear when finished. Taking one or two busy-work clicks away from the players felt freeing somehow.

Instead of heading to my main quest, I moseyed on over to a side objective. There I found that the game will keep automatically adding objectives to your tracker when you get near to certain points, so I ended up chaining together several sidequests that kept me busy for a little while. Can I just say that firing off homing rockets and watching my prey run away in terror before getting blown sky-high is perhaps one of my favorite things in the world now? 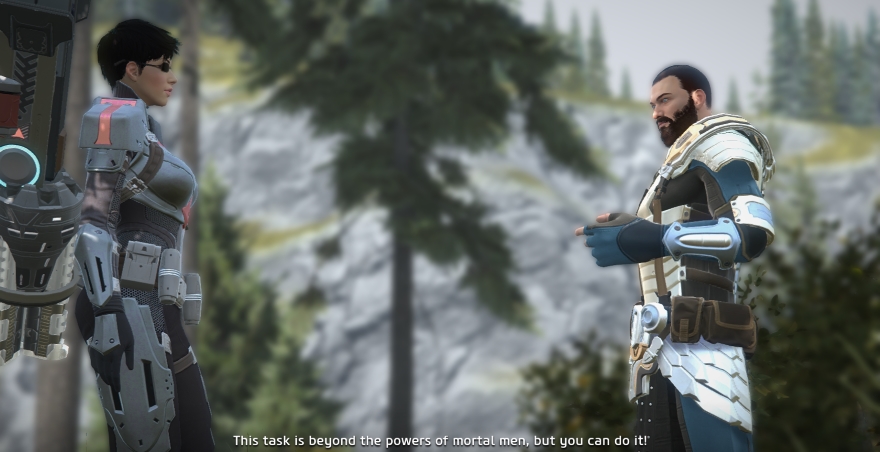 While I wasn’t seeing a great amount of loot other than credits and a single, solitary ring drop, at least completing tasks was netting me “sparks.” With enough sparks, I was unlocking new skills for my gigantic assault rifle/plasma cannon. The flamethrower was a nice touch.

Side missions done, I used the auto-direct feature to guide me to the main quest giver. Despite his beard, he had the voice of an 18-year-old kid. I’m finding that Skyforge’s cutscenes can be great if they’re dialogue-free, but once people start talking, it goes downhill in a hurry. Bad lipsyncing, tepid voice acting, and weird camera movements make them an unpleasant experience.

I decided to switch classes and give the Lightbinder a try. The Lightbinder is a support class that does a bit of healing and shielding, although some of its skills are context sensitive. If I target an enemy with Pulsating Flare, I’ll do straightforward damage, but if I target a friendly player, I’ll boost her next attack. Neat-o.

Once you get the hang of it, combat in Skyforge has a decent flow to it. It’s very clicky and a little positional (perhaps more so down the line), but the strikes feel right, and it’s accomodating to other players jumping into a brawl. In fact, the big bad boss of Dankit Island saw a steady stream of attackers seeking their quest reward, and from my observation, everyone who tagged in was able to successfully complete the mission. I hung out there for a while, buffing players who were fighting. Good times.

All in all, Dankit Island was a short excursion, after which I ended back at the Divine Observatory. Here the game opened up more options for my character, including the above Ascension Atlas. The atlas is basically your character’s talent tree, and there you can spend different colored sparks to progress. It’s mostly linear for a while, although it does end up branching out as you go further into it.

Here’s an interesting screen that opened up. Well, currency isn’t interesting in and of itself, but this notice that there are limits to the number of credits and sparks you can earn every week definitely was. I’m guessing that it’s either a free-to-play restriction of some sort or a way to curtail farmers or both. All I know is that players aren’t especially fond of being given limits on progression.

I was happy to get a capsule that spat some rewards at me for leveling, including a new costume (a surprisingly modern casual getup). If Skyforge has a lot of costume options as rewards, I could really get on board with this. As with classes, you can switch costume options on the fly with no penalty.

At the park nearby, I met my first follower: an NPC who decided for whatever reason to believe in me. I guess he’d never seen a level 1 character mow down rat-people before. While I appreciated the free stuff, I’ll admit the whole “becoming a god” conceit is a strange facet to this game. Is it blasphemous for a person of real faith or bizarre to those who have none to play a game where they’re treated as a god? Is it insulting or extremely narcassistic to indulge in an MMO that puts you on such a grandiose pedestal? Is it maybe all a little silly?

I mean, I know we’re used to the whole “you are the chosen one among five million other chosen ones picked to save the world entire” trope, but this is kind of taking it to a whole new level. It’s probably moot to question it, however. I have no choice if I’m to keep playing; as with so much else in this game so far, Skyforge keeps you on rails. 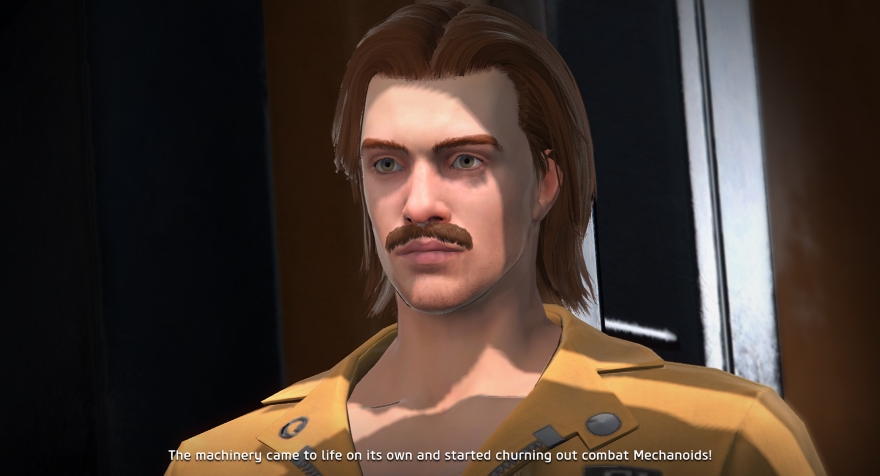 Next up on this fledgling deity’s to-do list was to head over to a different continent and deal with a robot rebellion in an automated factory. I was quite amused by the choice of moustache that was given to the lead engineer NPC. If he was going to suddenly start spouting double entendre or cheesy come-ons, I vowed to log out on the spot.

Like Dankit Island, the robot factory was a straightfoward romp, like a mini-dungeon that others would occasionally join. I’m starting to wonder whether this is just Skyforge’s way of dipping my toes into the water of a much larger game world or the rest of the MMO will be a long series of dungeon runs.

At least at this point, I’m left a little underwhelmed. Don’t get me wrong — I’m not bored. The combat is fairly fun, the ability to change out classes gives a lot of variety, and the graphics are high-tech eye candy. But I haven’t seen anything through this point that suggests that there’s a lot of depth to the game. I’m definitely not feeling it in the story or NPC departments.

My mind keeps comparing Skyforge to Neverwinter in this regard. I actually liked Neverwinter a lot, even though it cast away pretensions of being anything other than a full-fledge combat simulator. But Neverwinter was always more of a guilty pleasure than a long-term stay because of that, and I’m wondering if Skyforge will be much the same.

When it comes down to a simple gut check after a few hours in the game, I can honestly say that I do want to keep playing Skyforge because it’s enjoyable. I’m not seeing anything so far that leads me to believe that it’s going to rock the MMO world, but maybe it’ll do just fine aiming for a comfortable middle spot and finding an audience to match.

Wtf another one who don’t know what p2w is.. This game is so not p2w you’re confusing p2 advance(xp boost) with p2w. You realize those who got caps in the order system too right ? You need greatness and greatness are the blue leadership nodes in the atlas so when you cap sparks you cannot get greatness so you can’t progress the order either… So there you go not p2w. I was 40k prestige in russian open beta with god form without ever paying a dime.. You should thank them for making it so fair for ftp players. Actually paying or premium in this game is worst since you reach all caps faster so I would say ftp players have a more enjoyable experience. This is the best ftp mode I have seen so far in any mmo’s not like some mmo who claim to be ftp cough..swtor..cough.

matth6904
it is already a pay to win
buy scroll, update order, you can cross ppl with 20k of prestige j r k.
This limit cap is broken. Queu can take 12 hours.
So this game is beautiful but it’s simply same as another pay to win and add a ridiculous pay to not play sytem.

You realize if they remove weekly cap the game becomes pure p2w right ? What an idiot you are.

SKYFORGE
– WORST EVOLUTION SYSTEM IN MMO’S HISTORY!
65h of gamplay per weeks minimu befor reach the limit of evolution !
Playing 2 days++ per weeks and doing facebook games 5 days is
not my conception of mmo.
80% of the player hope for an update who remove/upgrade this limitation.
Limitation grow up each weeks but honestly further you advance further you need
more sparks for everything so it is useless.
WITHOUT limitation issue this game is one the best mmo ever.
With this limitation he win the – Retard Awards –

I love how this is derailed to a purely religious topic, and no one mentions the absolute mediocre game behind that.

Eliot_Lefebvre dewdodu It was just meant to be a quip, if we honestly can’t make pretend technically speaking doesn’t matter your most belief with have a problem with the game. Ex. Christian with its no other god commandment.

I’ll keep this on my watch list, looks promising, however the apparent lack of an open world concerns me.  That’s kind of a deal breaker, at least from my point of view.

Syppi That’s funny, since I usually have that reaction to being the “chosen one” but as a god (one of many), it made me think of all the world mythologies and stories about gods really messing up and screwing over humanity. In some ways, I figured a game that included godhood would include consequences on a very grand scale.
I’m… guessing your play time didn’t reveal anything that cool though, huh?