END_OF_DOCUMENT_TOKEN_TO_BE_REPLACED
It’s a good time to be a guild in Neverwinter. That’s because on August 11th, every guild — no matter how large or small — will get their own massive zone to adventure and build a base of operations in when the game’s seventh free expansion, aptly named Strongholds, releases. Just how massive is massive? When Executive Producer Rob Overmeyer states that the area is easily three times larger than Neverwinter’s largest zone, he’s not exaggerating!

I toured the zone with Overmeyer and Community Manager Alex Monney, and I can tell you that even the trailer doesn’t do the scope of the area justice. (When a dev can actually get lost for a moment during the tour, you know it’s spacious!) Even more than that, Overmeyer noted that the zone was built for expansion, and players will see dark areas on the edges of the map where the zone will expand in the future.

As a self-proclaimed connoisseur of housing, I was impressed by Neverwinter’s first foray into the feature. It may not have the extent of decorative personalization that I prefer, but there’s a bit of available in the form of what building amenities are added. And the stronghold has plenty of functionality, which will bring guilds together to do more than just sit on a bar stool and tell stories.

As much as I love housing, sometimes you want a feature to fit into a game instead of just be thrown in just for the sake of it. Luckily, strongholds have a deep history in Dungeons & Dragons. Overmeyer explained that the idea of players earning and holding keeps was introduced in the very first D&D books. “In later books and modules,” he told me,”the cost for things for strongholds like houses, towers, holdings, and keeps and such, as well as maintaining the lands, became a part of the rule set.” That carried over into the second edition, which added rules for the large combat system. “For the seventh module we’re taking from the pages of the original D&D manuals and bringing to to the digital space,” he said. “It’s our chance to expand on that original system.” In the game, the system will be introduced to players via story and cutscenes.

Beyond the history of Strongholds, Overmeyer said PWE “wanted to provide really cool challenges for guilds and collaborative advancement in the game — something for the whole guild to tackle.” 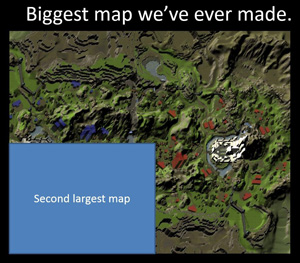 I’ve never been silent about the fact that I think working for something gives you a greater sense of accomplishment, and guilds will definitely have the chance to feel accomplished when they secure their strongholds. While a zone is given to each guild for free, a keep isn’t just handed to them. Instead, guilds will have to conquer the area and fight off various critters that also want to call the place home. Overmeyer talked about an orc tribe, Many Arrows, that the guilds will have to fend off. Players will be tasked with necessary missions as well, such as scouting, aiding guards, and recovering supplies. An intresting thing to note: As the keep levels up, so too does the difficulty of the tasks and the mobs guilds fight against in the zone. New enemies will appear, including mercenaries, wizards, and even a score of dragons.

What is especially nice is that this housing feature is not restricted to just the largest guilds; even the smallest guilds will get their own spaces. Overmeyer emphasized, “It isn’t limited to endgame; there’s tons of stuff for small guilds and big guilds alike to do.” There are quests for players, ones that are set within the map itself and some that send you out into the rest of the game world.

Once you de-critter your keep, you have to build it up in order to reap the rewards. This will be done via a guild coffer, a special repository for all the materials needed to construct your keep and its surrounding buildings. While everyone can donate items and assets to the coffer, guild leaders can set permissions dictating who can build and who can establish which building project will be tackled, and guild members will be able to see which one they are working towards. Necessary building items come from playing the campaign, skirmishes, PvP, and resource gathering (including resources garnered from the stronghold zone). “Almost everything a member of a guild does can be used to help the guild advance in some way,” Overmeyer told me. Donatable items include resources, campaign currencies, gear, gems, gold, and astral diamonds. A fun bonus to this system is that players actually earn guild marks for donating; marks can be used to purchase things from the guild store.

Once guilds have claimed their land, they get to improve it by building and upgrading structures like towers, marketplace, lumber yards, and barracks as well as upgrading the keep. All structures will have 10 ranks that can be upgraded, and new things are unlocked at each new rank; the guild keep itself has 20 available ranks. As the keep itself is upgraded, players will see a change in not only the physical structure but the population of the city; it will bustle with more NPCs, both those with functions (like merchants and quest givers) and those who just add that lived-in, populated feel.

Each plot on the map holds a specific collection of structures, such as for resources or boons (buffs that are unlocked for the entire guild). Some will even come into play during PvP. And since there are more structures available than there are spots to place them in the zone, guilds will have to decide which ones fit their playstyle most. At launch, there will be seven PvE boon structures and two PvP ones to choose from, with a total of 25 different boons available. However, only one boon for each can be active.

Additionally, guilds will have a specific event encounter available to them. It will be extremely difficult, but it will also confer great rewards. Overmeyer described to me the Greed of Dragon 40-man encounter, where guilds will have to split up and figure out how to take several dragons down. “It’s the most challenging, guild-specific event in the game,” he said. “It is not something that’s just rinse and repeat. It presents a challenge, and part of that challenge is coordination.” He emphasized that players won’t be able to just dogpile on each dragon in turn and then move on because once one dragon is vanquished, the remaining ones aren’t apt to sit around and await a similar fate.  Overmeyer stresses how D&D dragons are’t dumb beasts with wings that look like lizards; they are intelligent and magical. If your compatriots were vanquished in an unfair fight, would you just sit there and wait until the group comes for you? Once one is defeated, there is a short time before the others just leave.

Since the dragon event supports up to 40 players, how will the smaller guilds get to participate? Overmeyer explained that it the events are accessible for smaller guilds; since rewards are based on how many dragons are defeated, smaller guilds can focus on attacking fewer dragons. He also said that the team has some good ideas on how smaller guilds can help each other. Everyone who participates in the event will get goodies. “Some of the best rewards in game are going to come go from [this] event,” he said.

Choose to protect your keep

“One of the things that is really important about Strongholds is that it’s this huge PvP endgame advancement system for guilds,” Overmeyer told me. “We’re very excited to bring in large-scale guild PvP.” Although I did not personally get to see this feature in action, the PvP side of strongholds is a very interesting concept. In it, two guilds will face off against each other in a 20v20 MOBA-style match to defend their keep while trying to conquer its opponents. Each guild’s stronghold zone will literally be hooked together to make one three-lane playfield. Players will use resources on the map to make siege engines, and the guild that curries favor with the big dragon that might show up with enjoy some large, fiery assistance.

One of the best aspects of the feature is that the PvP is purely consensual: Guilds have to opt in to the PvP. Said Overmeyer,

“The important part of that is that it’s not mandatory PvP. It’s not like you have a zone where other guilds are going to move in and start burning your keep down. It’s opt in; it’s queuing together and fighting other big guilds in PvP.”

Even better, the queue will match the opponents up at a time when they choose to, namely being when they are online and prepared; as Overmeyer said, “No 3:00 a.m raids where your entire keep is destroyed.” Smaller guilds can participate here as well: When there aren’t enough to field 20 from the guild, the ranks will fill with others.

Ah, glad to finally get the info I wanted, whether the pvp in strongholds would be optional or not. Glad to see it’s purely optional. I may just have to go back to Neverwinter.

Huxys It’s a 20v20 map. I think it will be fine. We will see how large PVP guilds will dominate it…

I don’t know how many games with catapults and stone walls I can take…!

The Daily Grind: What’s your favorite place to just hang out in an MMO?

Age of Conan announces a test for the new Onslaught group...

Path of Exile’s latest patch introduces a mid-season nerf to an...