My call the other week for aerial shots triggered a cascade of submissions. You people really like your heights and flights! So I have a lot of those to share with you in coming weeks, but we’ll start out today’s gallery with Ralph the Wonder Llama’s picture of a player-glider coming in for a landing.

“One of the things I’ve always enjoyed about Firefall is the gliding,” Ralph wrote. “I really think it’s my favorite mode of transportation. Nothing wraps up a good fire-fight like climbing to the top of the nearest precipice and launching off into the quiet night air. In this shot my ARES pilot is coming in to land at FOB Sagan for a little R&R after a long night of bug stomping and Chosen slaying. Yeah, life is good!” 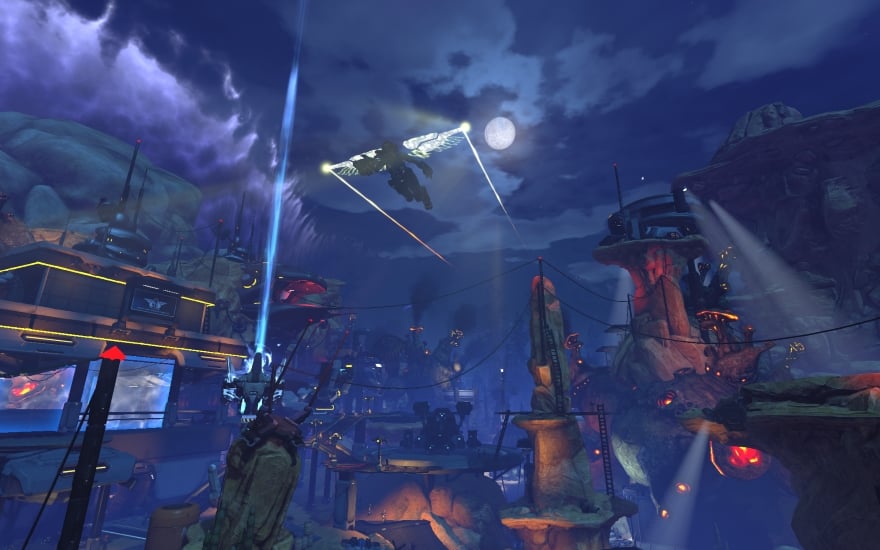 And just because you might not have a flying mount doesn’t mean that you can’t — temporarily — transform your ground mount into an impressive falling brick! For example, take Frank’s journey through the skies in Final Fantasy XIV. No, he did not survive the impact, but at least he managed to get a good selfie in on the way down.

“Here Axelay and company descend from the heavens to embrace their FATE,” he sent in, knowing my weakness for all things punny. 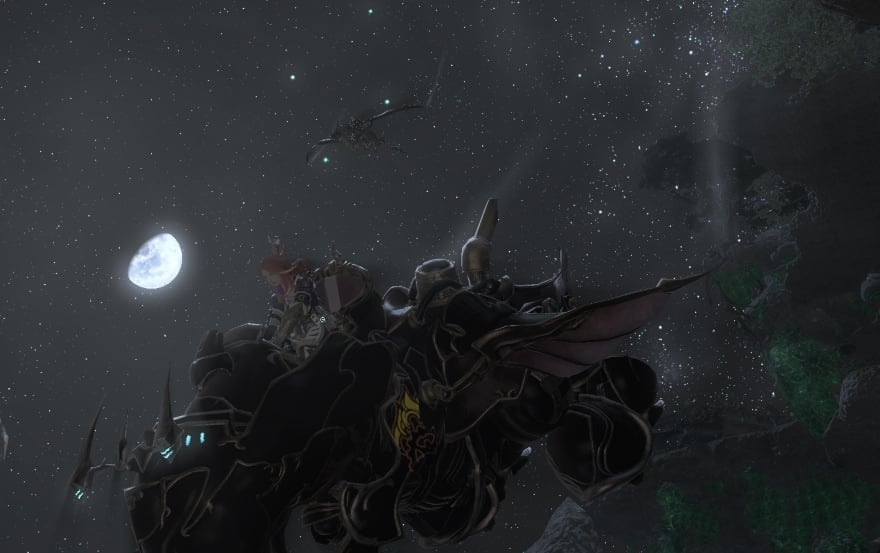 “Here is a shot from EverQuest II,” said Rozyn. “Sorry it’s just a boring character shot, but it’s the only time I think to take any! Here is some nice sinister-yet-pretty stained glass windows in Freeport for my Coercer to look sinister-yet-pretty in front of. Her bubble wand does detract from her sinisterness though.” 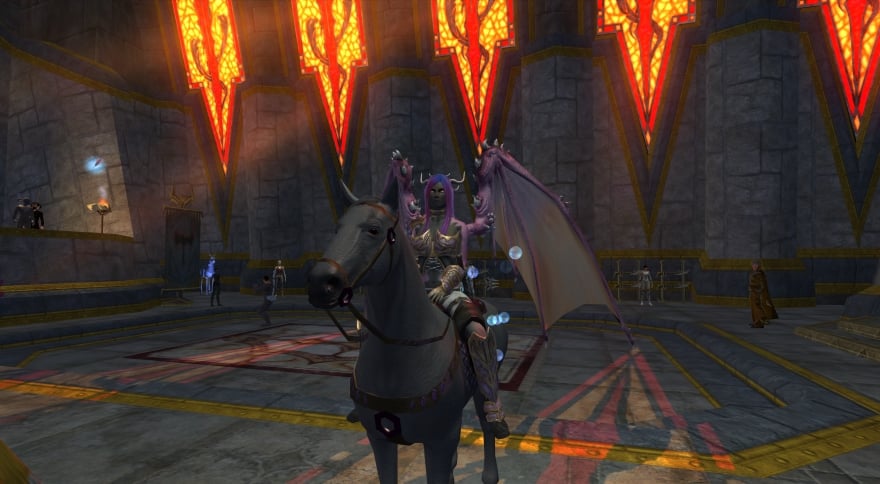 I have to say that you all are doing a bang-up job of filling the comments section every week with scads of incredible pictures. It’s like a fun collaborative project that, for a brief moment, encourages everyone to put aside petty gaming differences to bask in pretty colors and scenic views!

This one from TBPlayer2112 leaped out at me: “Haven’t taken many shots with my new PC, but that will be remedied in time. I did take one the other day in Elder Scrolls Online. It’s kinda dark but I love how the ‘spirit of the forest tree-guy’ looks.” 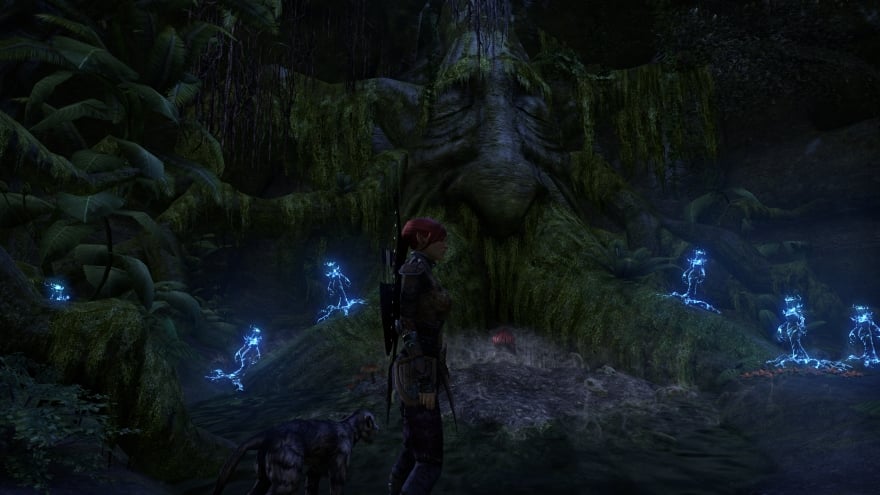 Let’s end on another aerial shot, shall we? This one is from Qarran in Blade & Soul, who has this reminder for the controlling player: “You, behind the keyboard! Quit looking at my back tattoo and focus! We are going to have to land around here…” 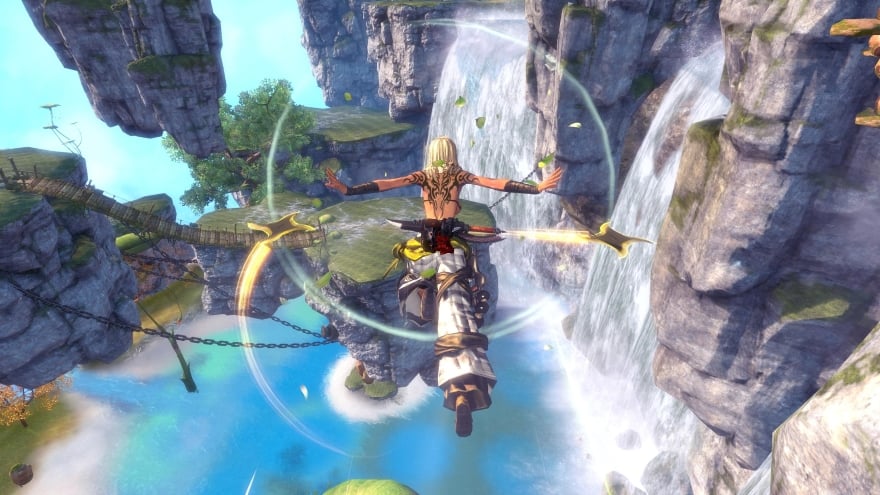 If you’re anything like me, I’m betting that you can’t resist taking pictures of grim, morbid, or disturbing scenes that you come across in your MMOs. This week’s screenshot challenge is to submit the best of those along with your thoughts on the scene!

My Tamer was exploring some underground caverns in the Calpheon region and stumbled upon whatever the hell this thing is. I prepared my self for battle but soon found out he was friendly and just wanted to teach me some lore. Black Desert is a truly crazy game.

Xijit Ya – no just changing the font in that.  BDO is more limited with their windows too.
Prize for most open has to go to ESO with the mods.

deekay_zero Zulika_Mi_Nam BalsBigBrother
Just referring to that awesome first pic – here is the intro it immediately reminded me of.

mysecretid Damonvile TBPlayer2112 That’s true. My one alt. is about lvl 10 and he’s wearing rags while waving a crooked stick as a staff around.

LordOfBread
It’s had it’s problems, but yeah, I’m always surprised at just how much fun Firefall is to play.
It’s one of those games where I start out thinking, “Okay, I’ll just play this for an hour, now that dinner is finished”, and next, I’m thinking, “What? What do you mean it’s 4 a.m.?”
It always seems to suck me in.
And yeah, the glider flight and jump-jet stuff is way more fun than can be explained to someone who hasn’t tried it for themselves.
Cheers,

Here’s a couple creepy ones.  One is from the secret world the rest are from rift