Sometimes MMORPG players might get the feeling that game companies will let just about anything slide in order to keep the most revenue streaming in, but that’s not the case with one particular hopeful City of Heroes successor: Ship of Heroes. Studio Heroic Games is predicating the game on a positive atmosphere, which starts from the ground up.

At this year’s PAX West, I sat down with CEO Casey McGeever to talk about the game: where it’s coming from, where it is now, and where it’s going. We discussed funding, rivalries, community, and the wild backstory about the massive ship that heroes will be living on. After that, I attended the CoH successor panel to hear about the three largest superhero MMORPG games currently in development. Let’s suit up and dig in.

As much as Ship of Heroes is being built for the City of Heroes crowd, it isn’t City of Heroes. There are some obvious differences, not the least of which is the location: It’s set on a ship instead of a city. OK, to be fair, there is a city in the ship, but the ship itself is a gigantic, 20-level microcosm of a world five centuries in the future. But that’s not all. “We’re going to emphasize and put in a much more advanced crafting system, harvesting and crafting in fact,” McGeever explained. “Crafting and harvesting bring in communities and allow people to specialize, and help create a system where you don’t just go in and bash things, level up, and leave.”

Of course, some things are meant to stay be similar. That list includes superheroes, robust character customization, and the positive community. SoH, McGeever told me, is about enhancing what was had in CoH. As he put it, “City of Heroes was a great game. I myself had 60 Incarnate characters on three servers.” At the same time, he recognizes that the gaming scene has moved on and developed further over the years. Heroic Games wants to take incorporate modern advancements into its title.

Noting the game’s failed Kickstarter from earlier this year, I asked whether the team is concerned about falling behind in development? McGeever rejected the idea. “We are right on target,” he said. “We’ve never missed a milestone yet.” In fact, the game will have a testing phase in September and another in December, thanks in part to a steady stream of donations through its website. McGeever assured me, “We have the funds to push ourselves to beta. We already know that. We know we are going to succeed. We know we are launching.” Although there are no plans for a future Kickstarter, he acknowledged it could happen. For now, the company is sticking with just donations from the community. 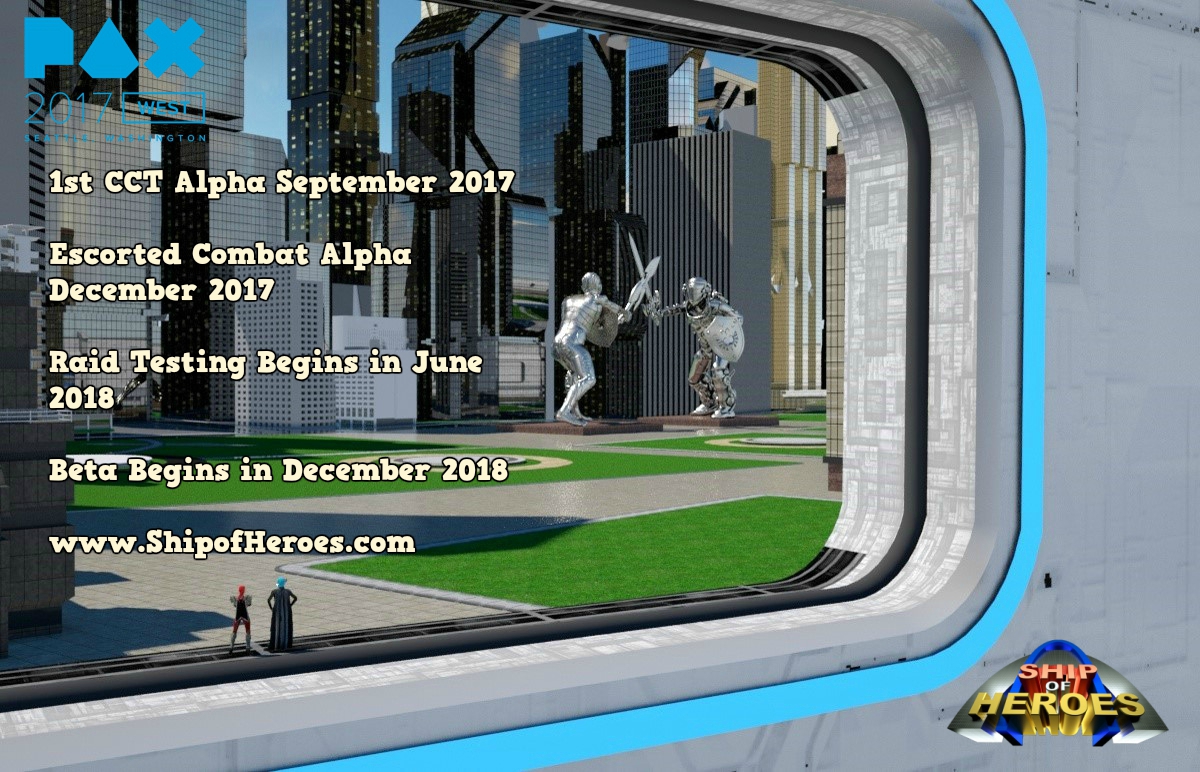 The whole reason for making the game is the community. “I’ll tell you what I like the most about City of Heroes that I’d like to recreate in Ship of Heroes is the positive community,” McGeever told me. Noting that negativity seems so prevalent in many places in games and that politeness has gone, he declared, “We’re designing the game with many, many little subtle things to try to bring a more courteous, a more positive community back. We’re willing to be a smaller game to have a more positive community.” These things include a more beautiful environment, 24/7 chat moderation (one level of volunteers, then a level of professionals), and a character and account reputation system.

“I want to create a place where the roleplayers come because they are having a good time, and the crafters come,” he explained. The game isn’t about endgame content; it’s intended to be more about the social experience, a place to go regularly to see your friends. “That’s part of the whole magic of what City of Heroes had.” He said it won’t be just CoH players who come to this game but also “those who have a certain outlook on life, who want to have some fun.” How serious is Heroic Games about having a positive community? “Put it this way: We think people should be unafraid to form or join a pick-up group.” 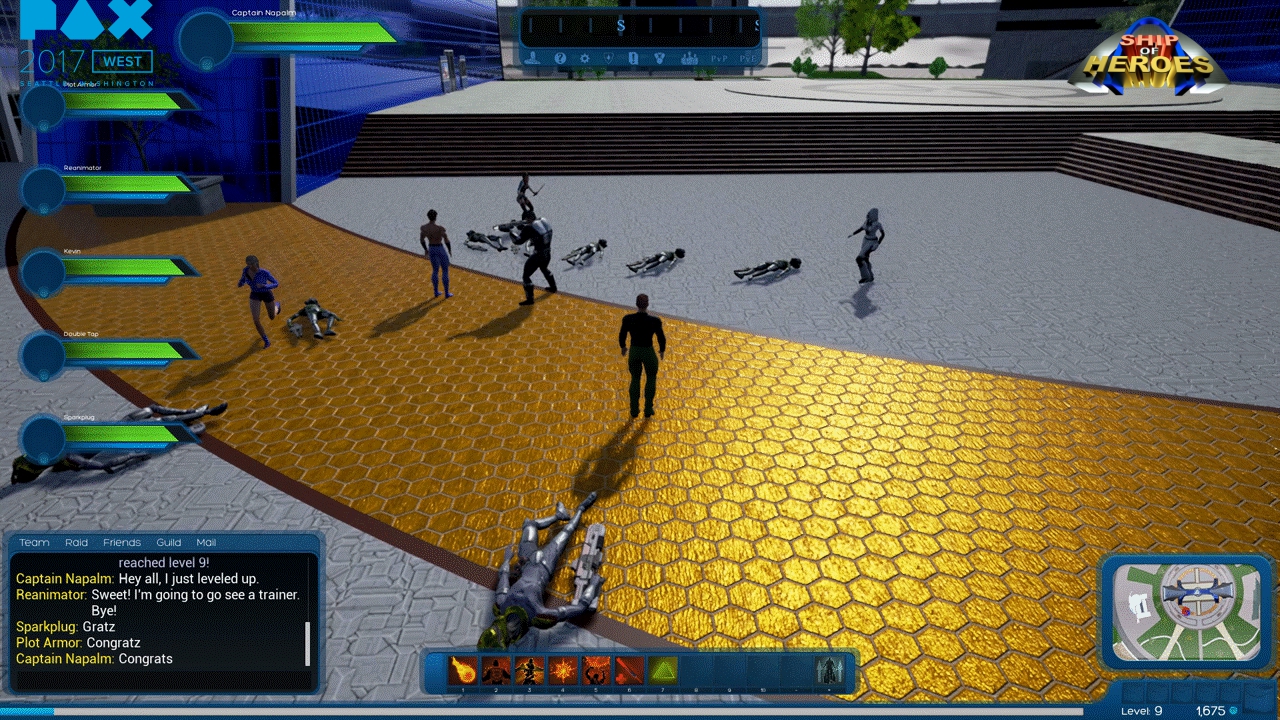 Speaking of community, when I asked about any possibly rivalry among all of the successor games — Valiance Online and City of Titans, specifically — McGeever said there was none. In fact, he said said the three teams communicate often. Besides, he notes, the pool of players is not fixed, and each game’s launch will only expand the market.

“Each of us is adding to the success of the others,” he emphasized. “It’s not a fixed pie that we’re going to divvy up amongst the three of ourselves.” Or any other superhero game, for that matter! “We have done polling and surveys on this. We already know that for every ex-CoH player who is going to come back to the market that there are two who’ve never played the game.” Indeed, he believes that the most common reason many who want to support and play his game do so because they never played CoH and want to, so they want to give SoH a go.

Life aboard the ship, off the ship

McGeever set the stage for the game, describing the backstory and how the ship will be traversing space, traveling between planets. While in the beginning, the gameplay will be restricted to the ship (and probably only a certain number of levels on the ship), in time that will grow. Eventually, there will be planets and space stations where the ship can dock, picking up passengers (new NPCs!), leaving passengers, trading goods, and conducting all sorts of commerce and exploration.

Considering that according to the storyline the ship has been in space for 200 years by this time, McGeever reminded me that its history would logically include raids from other ships, counter raids, visits and trading with other planets and ships, and so forth.

The ship will turn this into a blessing, transforming one of the levels into a massive habitat called the Harvest Pit; it contains the most valuable but dangerous plants and animals there for players to go and harvest. This harvest room is also part of the economy of the ship as it has materials to trade once it docks into a port. 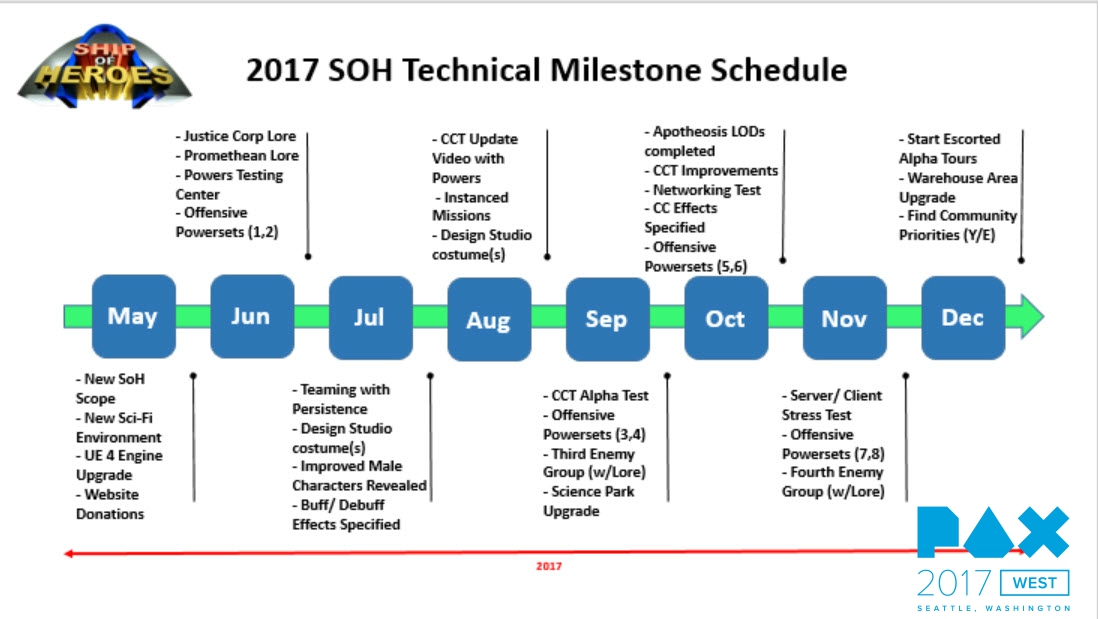 So yes, the life will go beyond just the walls of the ship. McGeever described how the plan is for the ship to travel the galaxy, making port on various planets. These planets will be varied — some very developed, some agricultural, some newly colonized, etc. It will take a long time to cycle through all the planets. And each time the planet can have a larger explorable area, offering more content. If players miss one chance at a certain planet, it will cycle around again in a number of months when the ship returns.

McGeever then described how this cycle can affect the story and play on the ship. There are hundreds of mercenary bands that players will discover and interact with, both on the ship and on planets — including NPC superheroes who may have been exiled from their Freedom ships for inappropriate behavior. Think of the depth of story possible there! 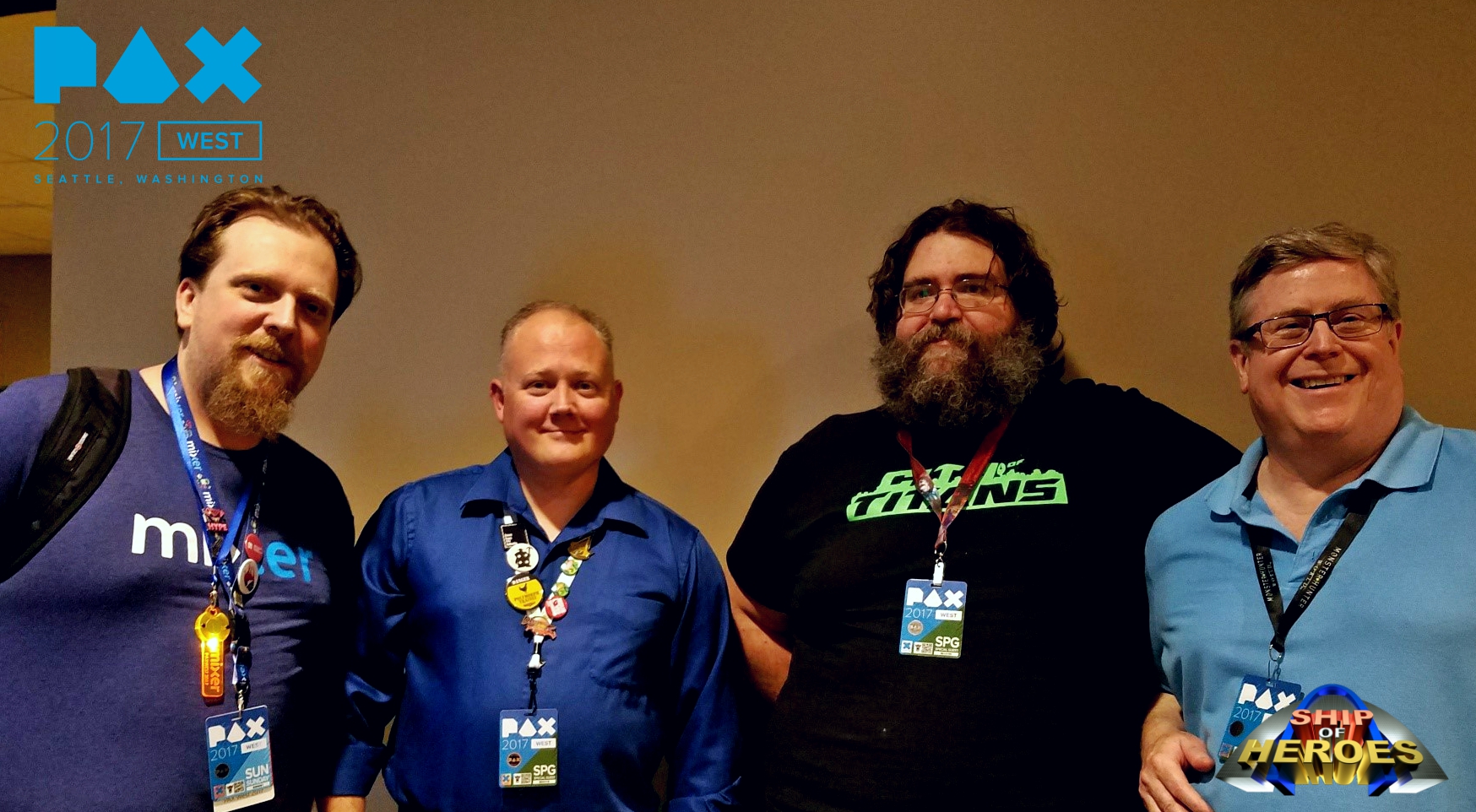 One of the panels at PAX was a gathering of the three titles that are all making new homes for the CoH players who lost theirs when NCsoft took it down five years ago. Ship of Heroes, Valiance Online, and City of Titans all had a representative there to talk a bit about their games and answer audience questions. You can watch the entire stream below, and check out the Ship of Heroes timeline above that includes dates for the planned alphas.