Automaton Games CEO James Thompson came along with Improbable, Bill Roper, and Mavericks to this year’s E3, where I got a second chance to see how everything in the battle royale/MMO hybrid is doing since GDC. I know battle royale is a hot topic around here, and the reaction we saw at GDC did have me worried about Mavericks’ potential audience.

Thompson was quite eager to talk about Mavericks, especially its battle royale side, but as someone who’s much more of an MMORPG player, I felt the one key thing we found common ground on was that Mavericks is aiming to be less of a simple genre game and more of a “platform” to build on, not because of any strength of the BR or even MMO genre but because of its ability to run a simulation. For virtual world fans, this is something I feel we should be paying more attention to.

Back on the field

Once again, during the demo I found myself having to kill my fellow players in the wilderness as a mystical killer fog closed in on us. However, this time, there was some story involved. Without going into too much detail, I can say the idea is that the game takes place in the far future when human life can be infinitely extended. In order to maintain order among various faction, governments put people onto an island to work out their rage, though they’re unable to die (or escape) while there.

Pre-fight, your character hangs out in the Capital, a large city with a huge Skyscraper that can act as a point of reference during your BR matches as well. While the Capital as a social hub left much to be desired in my pre-alpha build, the devs did mention that it will eventually be filled with other players looking for groups, vendors, and even minigames.

Aside from minigames, it sounds like standard fare, but with a few twists, mostly for the BR genre which, let’s be honest, doesn’t have much in the ways of a persistent 3-D lobby. While the team didn’t want to talk about monetization, I was told it won’t just be selling a bunch of cosmetics. Instead, cosmetics will be tied to missions, not quests, as those will be something coming much later. Missions will be influenced by things the devs observe the players naturally doing and turned into something akin to achievements, so doing missions will unlock wearable prestige you can show off in town. It may be something like “kill 6 people with a sniper rifle,” but nothing disruptive or annoying, especially to competitive players. Nothing’s set in stone, but the plan is to watch what players do.

Before we jumped in, Thompson spoke at length about how Mavericks pushes the BR genre by giving players more information. By simulating a world where grass is bent where it’s been stepped on, footprints are made but washed away in rain, and fires can start and spread to nearby buildings, players are given a kind of agency not yet found in other battle royales.

Unfortunately, they weren’t all found in this build either. Part of that is because we’re at E3. I know some people may be sick of hearing this, but online games really don’t demo well as is, especially multiplayer ones, simply becaues of the internet connection issues. Mavericks, however, also needs to work with SpatialOS. A lot needs to be happening to show off the gameworld, so limited to no internet connection is going to hurt a SpatialOS game even more than other online games.

That isn’t to say that Thompson and his team weren’t able to give hints at what’s possible. I was able to notice grass I’d walked through. Sound from guns in the distance helped me figure out where the action was more so than usual, as I could get a better sense of where a fight had broken out. But fire didn’t spread. Water didn’t seem to do much. My character movement was stiff, even lacking a slide animation for going down hills. These, it turns out, weren’t live in our demo, and I’ll get back to that shortly. What was live was death. The amount of time it took me to check for details and attempt to set up a trap was usually in vain, as the death fog would force me out. Hiding behind cover and trying to determine which grass was bent ended in my getting headshotted.

Even when I was able to make it to the center of the map before the others, there just wasn’t enough I felt I could do to make the world feel like, well, a world. It still felt like playing a realistic BR that didn’t bring much innovation to the table. We’ll probably have to wait until we can experience the game at home before the game’s systems start to shine. This isn’t a PR line I was fed, but something that’s been concerning me about how players have been reacting to SpatialOS games thus far. 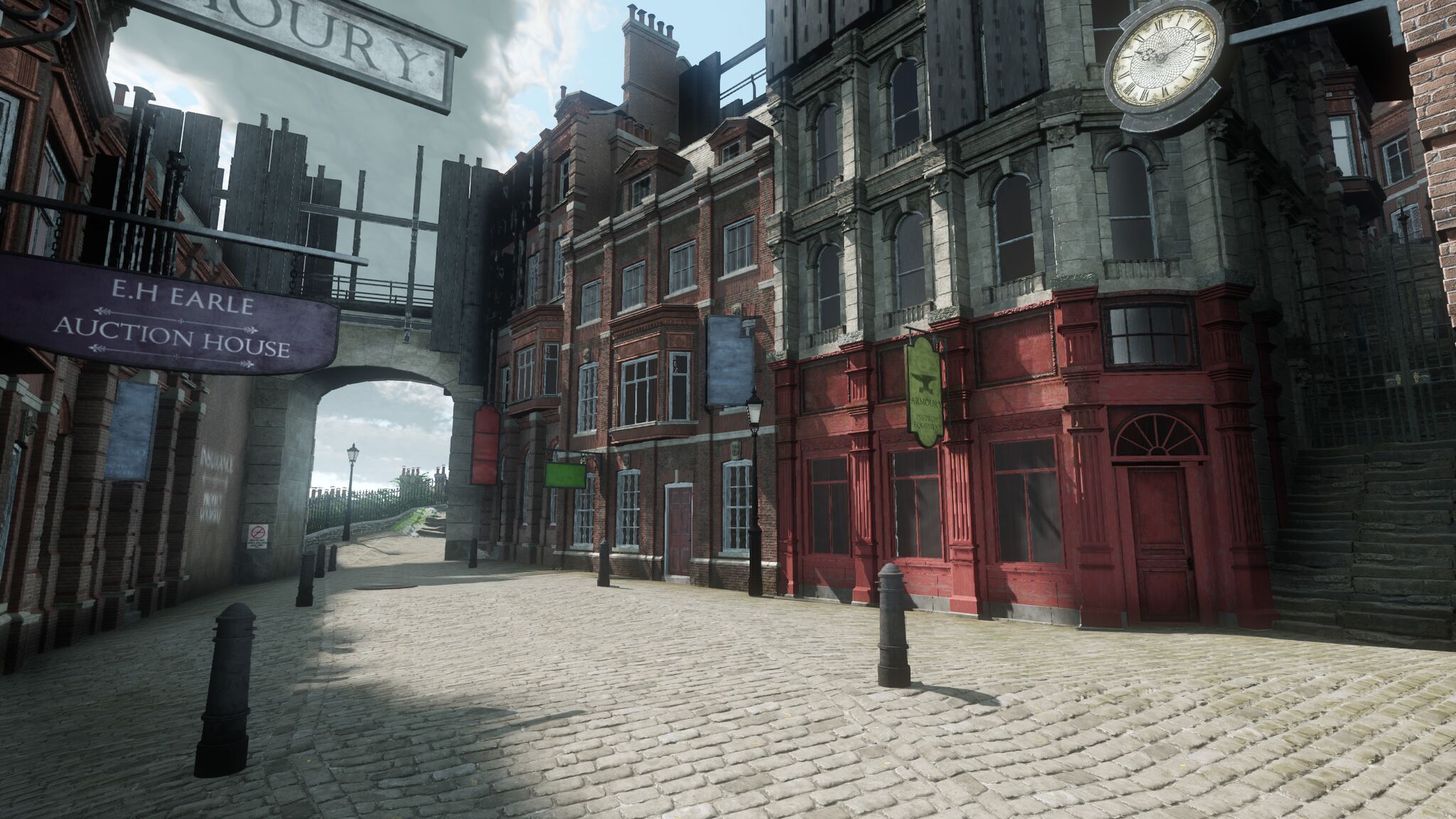 I was fortunate enough to chat with Thompson soon after I finished a few rounds of his game, so I mentioned the lack of environmental interaction, which was when he explained the additional issues of demoing the game and needing a stripped-down version for the convention. It’s more than understandable; it’s commendable, though unfortunate. Even the graphics seemed to take a hit in the translation process, as the screenshots I was given look better than what I remember playing.

However, even at home, environmental interaction is tricky. While the game does have spreadable fire, building the levels and accounting for certain variables is quite important. As the game takes place outside, there’s a lot of stuff that can potentially burn. While testing spreadable fires, for example, the devs have actually set fire to whole levels by mistake, both horizontally and vertically.

The latter is important because the team’s decided to include physics. There won’t be any floating cities after destroying the first floor of a building a la Minecraft. It won’t be the same way Worlds Adrift approaches physics, either, but falling trees are still dangerous no matter whose team you’re on. How dangerous they’ll be at launch remains to be seen, but Thompson doesn’t think a lot of people will use falling objects to set up traps. Bullets seem to do a good enough job of that, especially as they can pierce certain objects. Yes Deadpool fans, that does mean you can potentially get multiple headshots off of a single bullet.

Additional animation and function, like sliding down hills or being able to climb small edges, will also appear in the full game. Even better, when the game enters early access this December, players will be able to leave the Capital and explore a bit of the outside world. No further details than that, or if missions will be available at the same time, though it’s something Thompson says he’ll check in on.

Much of Thompson’s focus is on the idea that Mavericks and its hyperrealist angle gives much more potential for player agency. I like the idea, but as we saw with the initial Steam early access for Worlds Adrift, players don’t always latch onto those kinds of things when low-hanging fruit like ganking and griefing are easier to grab. Thompson feels that the two are very different games, and I agree to a point, but both are PvP games built in virtual worlds capable of really good real-world simulation – at a cost. Violence is the first thing enacted by players as we’ve seen time and time again, and as I mentioned, my attention to detail felt more like a liability than an advantage.

Again, this isn’t my usual genre, and with my MMORPG-first perspective I may have gotten a bit myopic, but when I watched others play, they didn’t seem to really looking at the details of the world or battlefield. They were constantly moving, constantly hunting, and constantly killing. It reminded me of why Fortnite and its cartoons graphics and fantasy made it so accessible.

Thompson, however, is chasing an older crowd that hopefully can appreciate the small details. Having actual trap objects is fun, but Mavericks tells you to start a fire and lure people in instead. The devs could still be humorous if they liked, but it’s not the area they’re pushing. It’s a platform. The game is starting with a battle royale with a social hub, and could grow into more. Regular updates are supposed to occur, so hopefully those city minigames happen. It’s definitely still one to keep an eye on.

Get caught up on all of our E3 2018 coverage and awards from the show this year!
Advertisement