Today, Wargaming’s ARPG Pagan Online launches into early access on Steam. Just before this launch, the developers were kind enough to provide us with an invite to check out the current state of this action game inspired by Slavic mythology, and that’s actually what we’ve done!

I’m a fan of ARPGs, and I’ve always been a bit of a nerd for ancient mythology, so I of course leapt at the chance to give Pagan Online a try. I admit I don’t know Slavic myths very well — I picked up a little from The Secret World and Dungeon Siege III, but that’s it — so I can’t say how closely this game hews to the original legends. Given its cartoony and sometimes tongue-in-cheek style, I’m guessing probably not that closely, but it’s still a change of pace from the usual Tolkien-esque fantasy.

The game world is heavily instanced along the lines of grinders like Vindictus or SoulWorker, but as I got further in I did start encountering larger maps, so there is still some element of exploration, and the graphics have a gorgeous, colorful style that makes the locations really pop.

The basic formula for Pagan Online will be familiar to anyone who’s played Diablo or any other ARPG: There’s an isometric camera, and you spend a lot of time clicking and looting. You know the drill.

Perhaps not surprisingly, it can be a bit repetitive. However, I did find that every time I started to get bored, the game would throw a new monster type at me or introduce some other twist to keep things fresh.

I was particularly amused by encountering a Golden Chicken, which is sort of the opposite of Diablo III‘s Treasure Goblins. You get bonus loot if you manage to make it through the encounter without killing the chicken, which can be rather tricky considering pretty much all your attacks are AoEs. 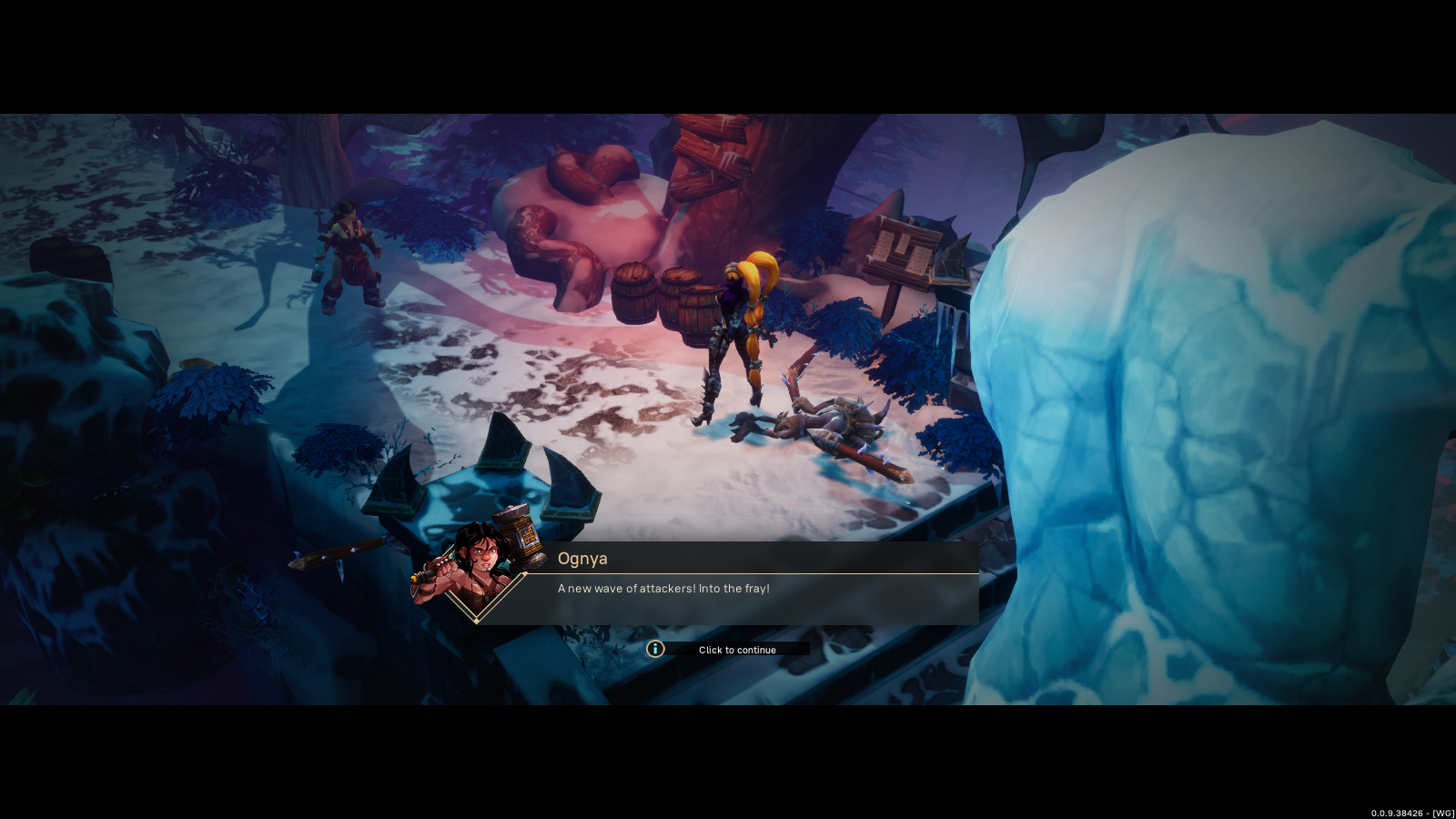 The controls are a little odd compared to similar games. Pagan utilizes WASD keys to move, instead of click-to-move like most ARPGs. It’s a bit awkward at first, but you get used to it.

Something else that’s a bit different about Pagan is that its playable characters are more like those of a MOBA. There isn’t much in the way of character customization. You pick a character, and they have a set toolkit of abilities. You can tweak their appearance by unlocking different skins and color tints, and I was pleased to see pretty robust options on that front.

Having no real way to customize your build or playstyle feels distasteful at first, but to be fair, true build diversity is pretty rare in games like this. It’s almost refreshing to encounter a game honest enough to not even pretend you have a choice.

I went with Anya, a blood mage whom I described to another MOP staffer as “basically Harley Quinn with a laser whip.” And I was pretty happy with that choice. Anya’s mix of ranged damage and life steal abilities clicked for me pretty well.

I found positioning played a big role for her. One of her abilities drops down a whirlwind that slows and bleeds enemies. With the right placement, you can force enemies to run through it to get to you. Better yet, she has another ability that sends out a vampire bat to deal damage in a line before returning to Anya, and it deals bonus damage to bleeding enemies. It makes for a most satisfying combo.

Looking over the list of other unlockable heroes (eight in all right now), I could see some really fun and creative ideas. The phrase “weaponized tambourines” came up, and boy that is something I didn’t know I needed in my life.

However, that does bring me to the one thing about the game that sends up a red flag for me, and that’s the “unlockable” part. 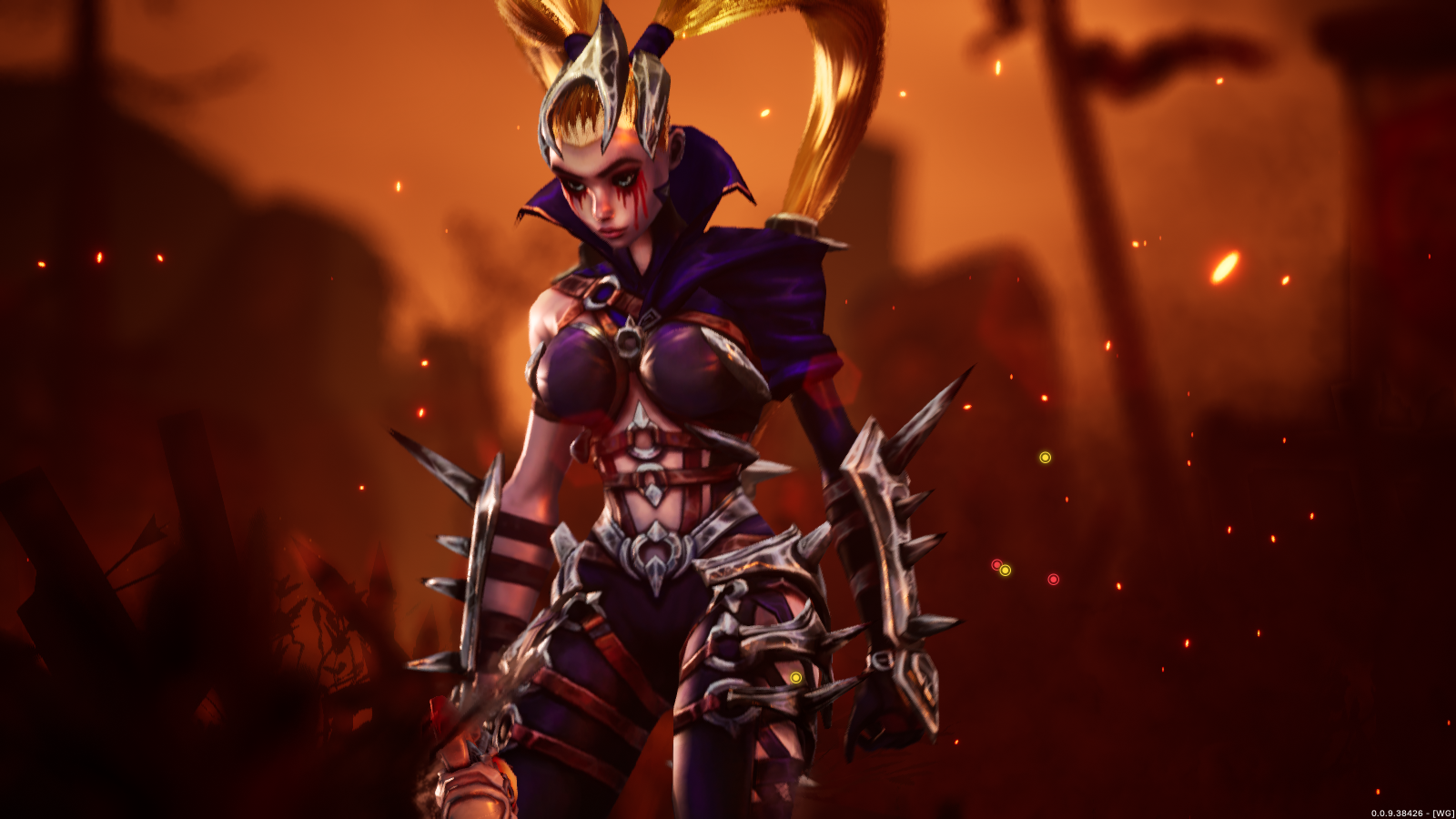 Pagan follows the Marvel Heroes model for unlocking characters. Once you choose your initial character (from only three available starters), you’re locked in. In order to play as another hero, you need to earn “shards” to unlock them. Shards are also used to unlock skins and other customizations.

There’s nothing that I like about this. With Pagan, I was lucky enough to be fairly happy with my first character, but it’s pretty common for me to have to reroll a couple of times in RPGs before settling on a class/character that works for me, and I’m sure I’m not alone in this. Marvel Heroes drove me away quite effectively by locking me into a character I didn’t enjoy, with no way to reroll without spending money or spending hours grinding.

There was no apparent cash shop in the build I played, but I fully expect this system to be monetized at some point. It’s the only reasonable explanation for such a mechanic.

Making matters worse, shards are specific to each hero, meaning there’s not even a way to target the specific character you want. Whom you unlock appears to be entirely up to RNG.

I understand that unlocking and leveling new characters is meant to be a core pillar of the game. There’s even a legacy system that grants you an account-wide XP boost based on the total levels of all your heroes. But I think you can still have that without making it such a grind to unlock new characters. I think learning them and leveling them is challenge enough. At the very least, it doesn’t need to be this obnoxious.

Aside from that glaring issue, Pagan Online seems to be a pretty solid game. I have a few other complaints, but they’re nothing too terrible. For example, there’s a lot of story, but it could be executed better. The dialogue is not great, either in writing or acting. 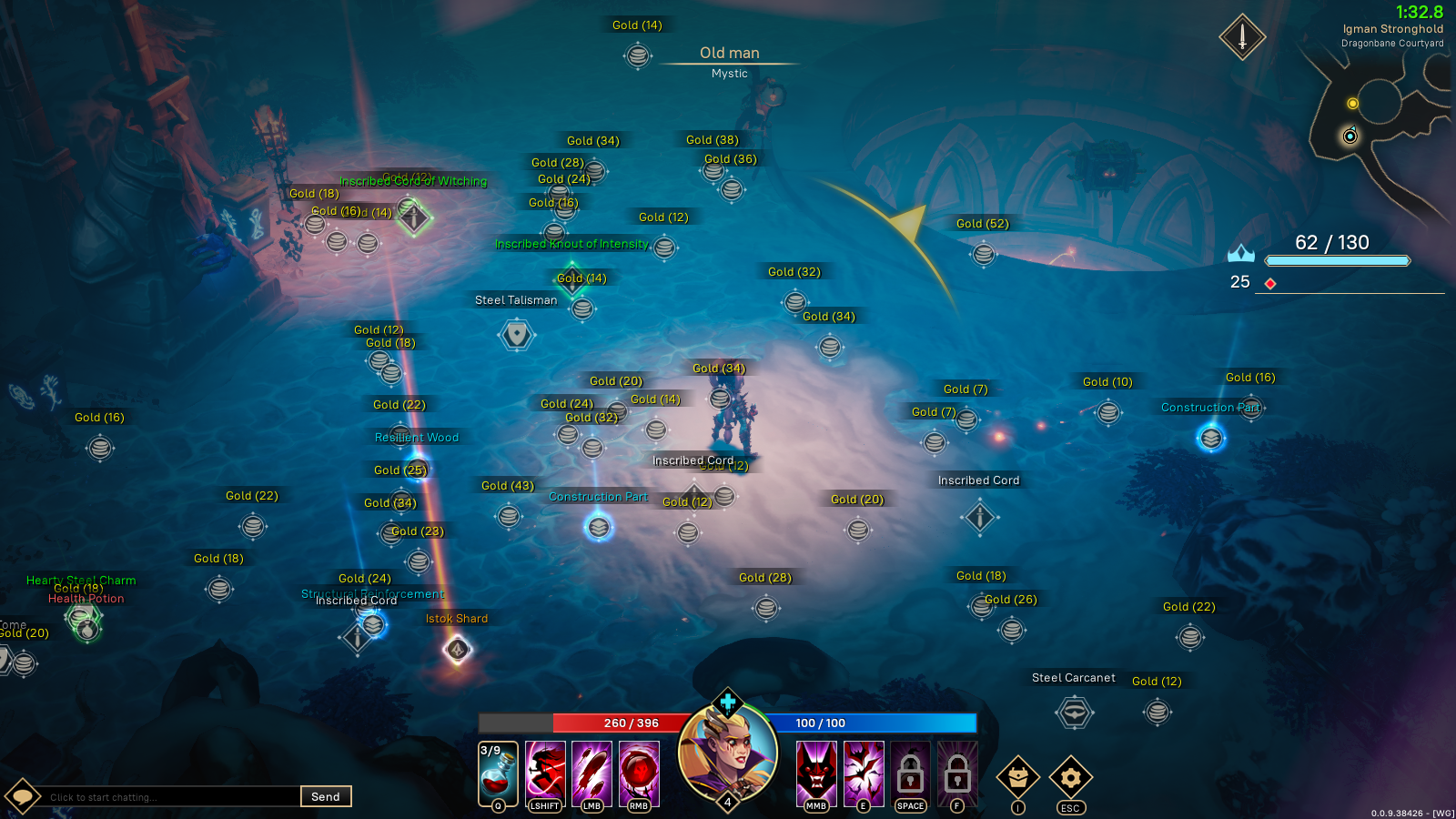 There are also currently some features missing. Most notably co-op play has not yet been enabled, and even to a hermit like me that does seem like a bit of an oversight. But it is coming, and Wargaming is a sufficiently large and successful developer that I have reasonable faith in its ability to deliver on its promises. This isn’t some crowdfunded title that may or may not ever launch with all of its features, if at all.

And the content that is currently in the game seems very well polished for an early access title. I had some issues with disconnections at one point, but I assume that’s just pre-launch jitters. Everything worked fine after that. I didn’t encounter any bugs.

I’m sufficiently bothered by the hero unlock mechanics that I can’t quite give Pagan Online an unequivocal recommendation just yet. It’s my hope that the unlock system will be improved somewhat when launch rolls around. I realize it’s probably too late to do away with the unlock mechanic altogether, but at the least I think shards should be made universal rather than hero-specific, and ideally players should start with a chunk of shards so they can quickly unlock a second character if they don’t like their first one.

If that issue can be sorted, this will be a game I’d be happy to give my unvarnished recommendation to. Unlock mechanics aside, Pagan Online is pretty dang fun.