It’s been a tumultuous couple of days in the Guild Wars 2 community following the announcement of the Icebrood Saga – saga, not season, as ArenaNet is apparently moving away from strict seasonal episodic structure in favor of more varied types of content for this arc of the game.

END_OF_DOCUMENT_TOKEN_TO_BE_REPLACED
On Friday, the team staged an event in Seattle on the first day of PAX to announce the saga. The degree of success of that event is of course a matter of opinion; our staff watching it was intrigued by some of the reveals, but the overhaul mood was a bit confused, as many of us wanted more from the arc in lieu of a proper expansion. But the more vocal parts of the community took that sentiment to an extreme, with a stack of Reddit threads and memes echoing disappointment – and much worse. Here’s one of the benign ones with over 3K ups as I write this:

Anet’s Announcement in a nutshell from Guildwars2

Apparently things took a nastier turn along the way, ramping up past grumping about NCsoft and ArenaNet’s leadership and heading into much more abusive territory. There were even multiple threads mocking what NCsoft VP of Marketing Mike Silbowitz wore onstage (both still there as of this morning). While at least one former ArenaNet dev took the playerbase to task for expressing feeling “let down,” Content Marketing Manager Rubi Bayer (who vets will recall once worked at Old Massively alongside many of us) posted a couple of threads on Twitter explicitly addressing the more toxic and abusive elements of the gaming community. 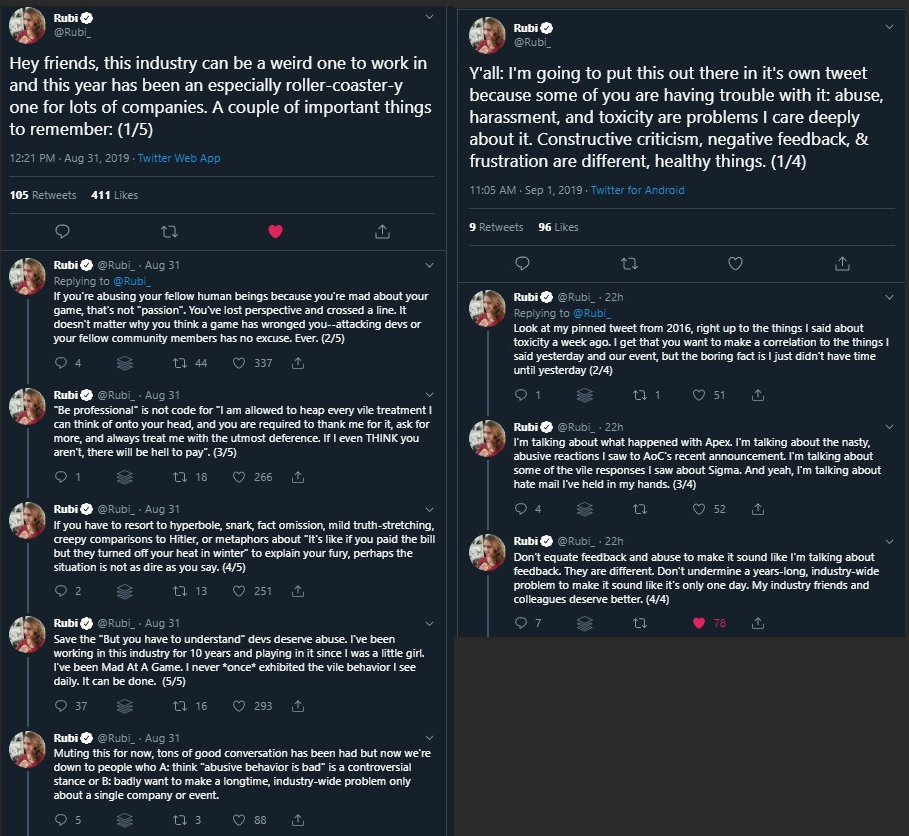 The commentariat was mixed about Bayer’s rather sensible comments, with some posting agreement and some alluding to last summer’s GW2 dev/community fiasco. But ArenaNet staff addressing the particularly vile vitriol rather than other feedback then turned the conversation in a familiar direction of late, at least for those of us who watched the Apex Legends team effectively dodge well-deserved criticism when a group of toxic trolls inevitably took it over the line and shifted the narrative. Reddit in particular now has a crop of threads with criticism specifically for the companies involved here.

“This is now the 3rd time within just a month I’ve seen a developer (as in the company) put out some kind of copy and paste statement that plays the victim and reads: ‘We know people are disappointed but we’re all human too so could you please all stop being so toxic and abusive because we’re the poor victims in all this while taking your money,'” one heavily upvoted thread argues.

“Let me be perfectly clear. YES these are humans and under NO CIRCUMSTANCES should ANYONE send any kind of insults or abuse or threats or anything at developers, or anyone in general really. That’s just not okay and we all need to treat each-other better. But I’m on the internet A LOT and I see maybe 1 in 40,000 people (obviously BS numbers but it’s very very low) who say something TRULY offensive. The other 99% is people expressing legitimate criticism or feedback or suggestions or who are just genuinely disappointed or want to know what happened to X or Y which was promised…years ago. It is NOT okay for developers to use that 1% as some shield or cop out, as a reason that they don’t have to engage with or respond to the other 99% of their community that just want answers or some basic dialogue. These people are your CUSTOMERS, engage with them about the product you are trying to sell to them. Be upfront about whats going on in your studio and REALISTICALLY when and of what size content can be expected. It’s not fair, and even downright disrespectful for developer (game companies) to keep writing off EVERYONE on the actions of a very small % of bad apples.”

So, what exactly is the non-toxic criticism? In particular, players single out the perceived ongoing lack of communication and structure and a proper roadmap chiefly over the last two years; we not only don’t know the scope of this saga, but we have no idea what’s next after that either, which is why so many people resort to datamining to figure out what’s inside ArenaNet’s head from week to week. But there’s also concern over lack of new content in the realms of elite specs, fractals, PvP, WvW, and raiding. Heck, people are disappointed about rewards too and were a bit miffed that Anet/NCsoft rented a theater for a blog’s post worth of content – and merch marketing – arguing that the countdown itself was better than the reveal. Even Wooden Potatoes refers to the game’s “weird and gloomy future” as presented at the event.

It’s not all toxicity and grumpiness, however; some folks have pointed out that expectations were way too high in a year when a third of the studio was handed pink slips and that the presentation was in line with the new studio’s realistic outlook (I’m still raising my eyebrows at the “four content teams” thing). And plenty of gamers lit into the trolls hassling the rank-and-file devs too.

We’ll have our more detailed examination of what was in the reveal – and what was missing – tomorrow after the holiday in Flameseeker Chronicles, so stay tuned for that.