The end of the decade is upon us. Many are now reflecting on how our lives have changed over the past 10 years. We’ve graduated high school, graduated college, and possibly entered the workforce as adults. Some have been married, been separated, or even built little, tiny, miniature versions of ourselves. Knowing full well that none of us will ever see another year ending in a “–teen,” let’s talk about what really matters – video games!

This past decade we’ve seen video games truly come into the mainstream in a way gamers of yore never even dreamed of. We started the decade strong with video game movies like Prince of Persia (everyone sits down by the fire for their annual Prince of Persia viewing, right?) and ended with hype dances a-plenty. And yet, there isn’t a single, shining example of the excellence of PvP in a MMO in pop culture.

We’ve seen some amazing innovations in terms of bringing PvP to the forefront of gaming – battle royales being only the most recent flavor-of-the-month. But our MMOs continue to struggle with the same concepts and game designs we began with.

Esports grew into a legitimate industry

In 2010, the concept of true esports on a large scale was still a novel one. Of course, gamers have been competing since the dawn of the industry. And sure, we had many gaming tournaments before we called them esports. But it was nothing compared to what we have now. Students can actually earn scholarships to represent their school esports team – crazy. If you’d told me back in 2009 that kids (ahem, young adults) are going to earn scholarships for playing video games in the near future, I would have several choice words for you that I can’t impart here.

Esports and gaming have been a defining element of this decade. While Counter-Strike and Quake and StarCraft and plenty of other games had prized tournaments before that – all the way back to 1972, as a matter of fact – we can’t debate that it was only in the last 10 years that it has truly taken off and permeated the mainstream. League of Legends’ first world championship tournament took place in July of 2011. Since then, the number of games and their popularity has skyrocketed.

Developers began to create compelling games that were not only enjoyable to play but also fun to watch. It was only a matter of time before one of those games hit just the right level of difficulty, visual appeal, and business model to become a cultural phenomenon.

Look, I swear it up and down. I’ve never played Fortnite. As if its societal impact weren’t evident enough, it continues to seep into my gaming column in spite of me. As much as I might want to glaze over the fact that this is a game, that it does have PvP, and that it is somewhat “massively,” I simply cannot ignore that it is a huge crescendo at the end of this decade in PvP gaming.

You could say that everything up to now was leading up to a game like Fortnite. But the fact is, Epic Games innovated and tried something a little new. It used lessons learned from other games and combat simulators, like PUBG before it. It added its own spin and style (and – ahem- considerable marketing power), and clearly what we got resonated with a lot of people.

So we need to ask ourselves: Where is the innovation in the MMO space, and why is it that we continue to see game after game being developed with the same concepts in mind – only with a shiny new veneer?

The PvP MMOs on the horizon (a horizon that appears to be never-ending) nearly all have the same playbook: large-scale battles in a destructible sandbox PvP environment, keep and territory defense, crafting and trade, and guild-oriented systems. It’s PvP alphabet soup. Everyone claims to be building games with all the pieces in there, but nobody ever bothers to figure out why or how those pieces should fit together. Or whether they even need to be in there in the first place! I don’t need a letter “c”; I already have the “s” and “k.” Better yet, “c” represents the “ch” sound now. English just got easier.

I know I’m going to get some heat from my guildies and many of you, but the truth is ugly. It isn’t so much that PvP MMOs are disappearing; it’s that we don’t see them innovating the way other games are. That PvP soup above – it’s exactly the same as it was ten years ago. Hell, that’s probably the same concepts Richard Garriott laid out when designing the original Ultima Online 20 years ago, although likely now with far less idealism and faith in the inherent goodness of players. So what are we doing?

Graphics and infrastructure have gotten a lot better, but the struggles remain the same.

The next decade of PvP

I don’t know what the games I’ll be playing in 2030 will look like. I know I’ll still be playing some form of MMO. We see the line between traditional and massively multiplayer continue to blur. It reached the point that Old Massively and MassivelyOP couldn’t even fit all the games into one bucket or the other, and so the not-so-massively genre was born. Perhaps by then there won’t be a line at all.

And yet I’m not sure how my PvP MMOs will get there. Will we finally achieve true large-scale hundreds-vs.-hundreds and thousands-vs.-thousands battles, and more importantly, will our hardware be able to handle it without rendering us all as slow-mo dots? Camelot Unchained is trying its damnedest; so are EVE Online, Dual Universe, and Ashes of Creation. And even if it is achieved, will those games have enough meat around them to make them fun and successful enough to bring in the gamers eager to play them? We need developers to not only push the limits of technology and what they want these battles to look like but find a way to make those games feasible and fun.

And I know fun is completely subjective, but look at all the games that have tried it. Warhammer Online, Guild Wars 2’s WvW, and all the RvR games of the past – we can’t seem to prevent combat at that scale from devolving into zergfests. Sure, it is fun in its own way, but not on the level we as PvP players want and deserve. We can’t create battles over territory that doesn’t result in a silly game of taking turns. When we get close to something meaningful, players leave or jump all into the winning faction. It isn’t fun to lose all the time, nor is it fun to have no one to fight. 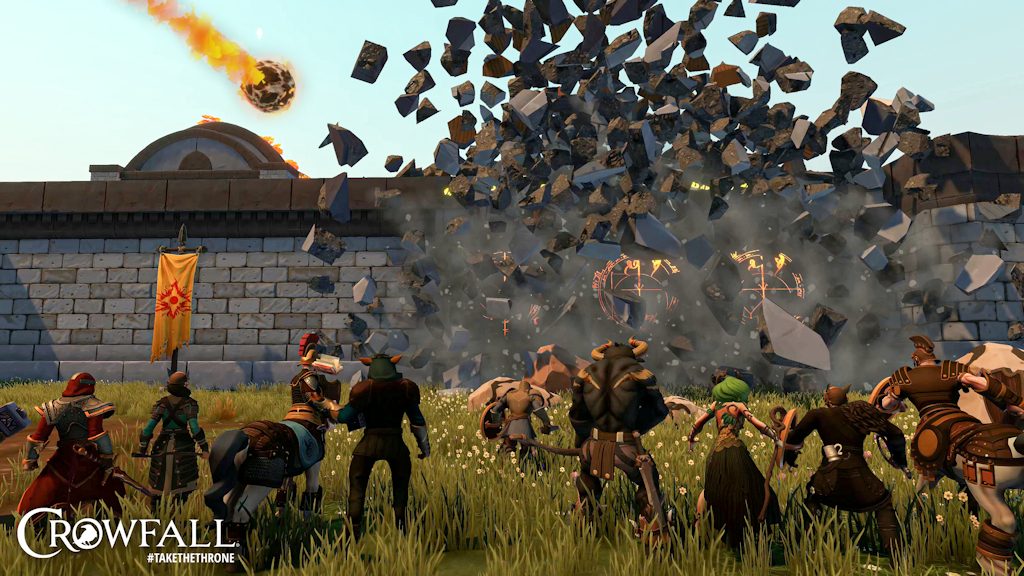 Crowfall originally sold me on its campaign-style gameplay. It sounded like a really innovative and unique concept being brought into the MMO space. But in practice, does the game play out that way? Will it at launch when it’s contending with more than just loyal testers? Or is it just a new coat of paint on that same old sandbox RvR game? Only time will tell.

What did you think were some of the standout moments in PvP this past decade? I’ve mostly focused on the rise of esports and the idea that innovation led there, but what do you think? Do you think the future of PvP MMOs is already out there somewhere, or is there something no one has even thought of yet that will rise to the top? Maybe MMOs don’t even have PvP in the future. How about that?