I regret to inform you all that my final moments in Albion Online were something of a bellyflop. A number of smaller frustrations just piled on top to effectively lead me to a realization of a pretty rough mistake and, subsequently, the end of my impetus to play more. Considering this is the final week of our time for this game, I think that’s appropriate.

As I was asked by the reading public, I stuck to the original plan of exploration. This, of course, meant I had to effectively stop exploring in order to learn the skills I needed to enhance my character and try once again to make some progress. With the goal set, it was first off to the Destiny Board to map out the things I needed to do and the next things I needed to unlock in order to make the tier of equipment I wanted. 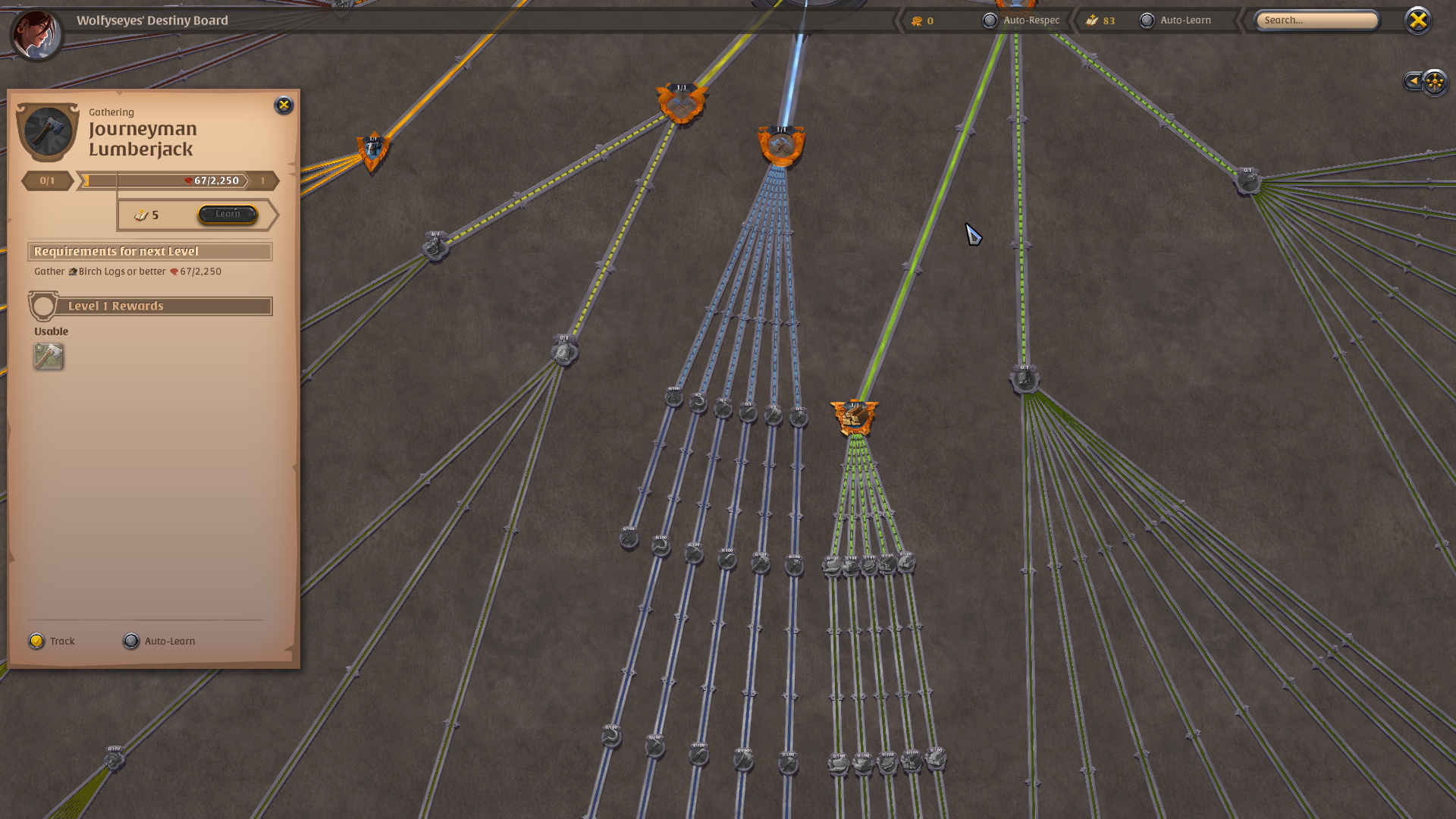 There were a number of new skills I needed to unlock, but I elected to start with the easiest one: lumberjack. That, however, did require me to look in to just what sort of wood I would need to start crafting the staffs I wanted to make. A little bit of looking around the Board seemed to suggest that chestnut planks were my next resource to focus on, so after a bit of Google-fu I found out what chestnut trees look like in-game and went to chopping.

Well, actually, I attempted to chop a chestnut tree, found out my axe was the wrong tier, had to go back into town to craft a set of the next range of gathering tools, and then get to chopping.

For a good long while, I was back in my sandbox comfort zone. I will never understand why, especially as someone who prefers PvE encounters like dungeons and raids in other MMORPGs, but something about sandboxes makes me into a pastoral task-loving locust, darting around and gleefully nibbling on all of the trees and rocks like a weird and possibly confused beaver. So it was that I was in my happy place in Albion, though it wasn’t a constant source of joy. You see, harvesting nodes aren’t instanced, and the area that I have been visiting has been pretty busy. So, naturally, there were plenty of other folks charging around looking for the same thing I was and leading to a race for untouched gathering nodes in that age-old open world game of Hungry Hungry Gatherers.

To the game’s credit, resource nodes do seem to respawn in pretty short order — a matter of seconds, even — but they also don’t show up fully recharged when they do first spawn. The large trees that I hack away at normally have three whole “chunks” of a lifebar to give, representing a total of nine pieces of material. When a large tree respawns, though, it only has three. This basically meant you couldn’t farm one respawning tree forever, which I can understand why, but also meant that large trees were either a full meal or a quick bite. 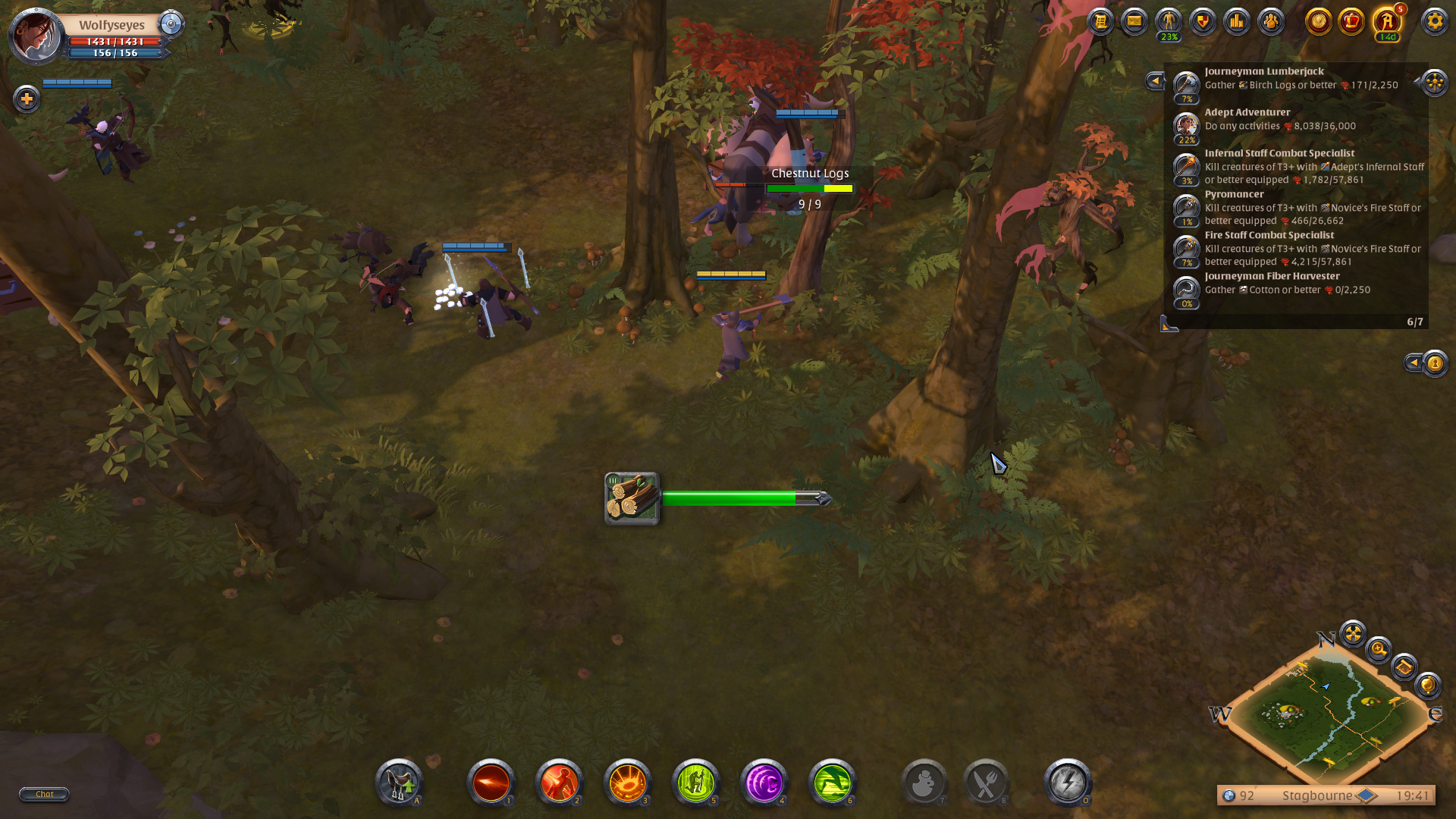 After some happy times gathering as many chestnut logs as I could stand before getting encumbered while running back and forth to the bank (and running into so many green portals, which figures now that I’m not actively trying to run into them any more), I figured it was about time I started getting into the process of making things. It was around here that I began running into a few problems. Most of them based on bad planning.

The idea was to get a bunch of timber, and then get a bunch of ore, and then spend some time smashin together some equipment to unlock tiers and get to the stuff I needed. Turns out, however, that I didn’t spend enough time getting through the lower tiers and knocking out some low-level kit. That’s not too egregious, I thought, until I ran into the realization that I was in the wrong biome for ore; my character is in the forest and not in the steppes or mountains, which means I was going to have to start traveling through possibly dangerous territory in less-than-ideal gear.

All right, fine. Let’s eschew the heavy armor battlemage and play to type with robes. I don’t know why this game — or any other game, for that matter — that has a hybrid class system is ultimately going to force you into specific role types when you pick your desired weapon, but that’s perhaps a soapbox rant for another day. So where can I find cotton to start making robes?

In the biome I’m not currently in, as you can see by clicking the image below.

Granted, I could walk to the appropriate terrain, but that was more risk and annoyance than I was willing to put myself through and so I decided to effectively bin the whole thing. Which really sucks because Albion Online does seem to have a lot of things that are intriguing about it. I just wish it was a little less married to the idea of materials being locked to biomes or certain areas. I also wish the game really did allow for some more hybrid class build options; a cursory look through some of the builds others have made seems to suggest that specializing really is the way to go.

These contrivances combined with smaller personal annoyances like click movement/combat effectively iced my enthusiasm for Albion Online. Which really is a shame because for “true” sandbox lovers, this really does feel like the full package, especially as a free-to-play game. Perhaps I’ll circle back around to this one another time, but for now, it’s almost a new month and time for something completely different. And that completely different is Roblox.

I actually had the idea of focusing on this game for CMA floated to me by Bree, and having had some casual, goofy fun in a couple of Roblox games already, I was all in on the idea. I hope you all will be as well, as this next month will basically be a bit like the Not-So-Massively Mix, but in a single game. To that point, here’s this week’s poll for which Roblox-built game to try out first:

Which of these Roblox games should I try first? Choose My Adventure! 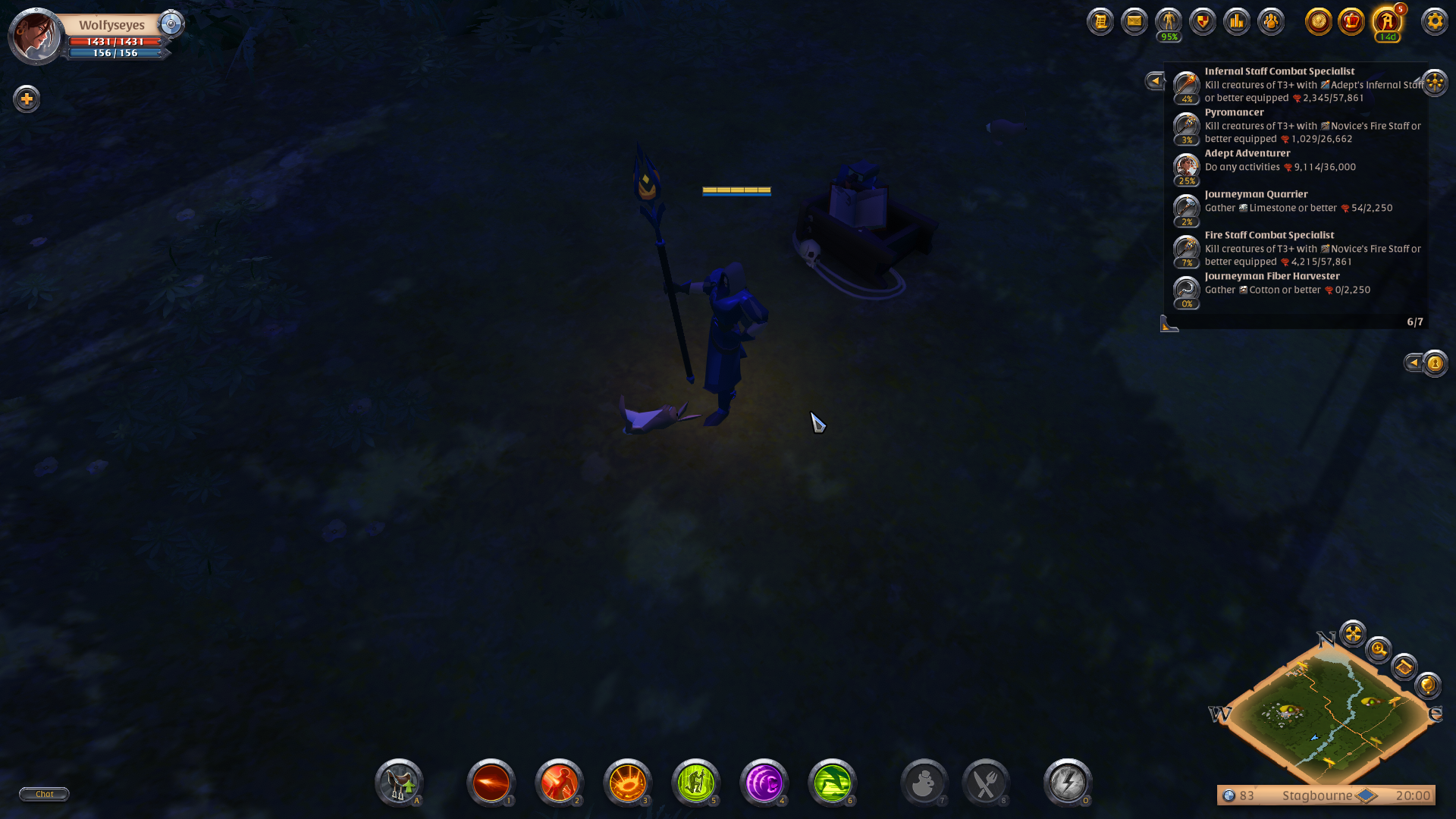 As usual, polls close at 1:00 p.m. EDT this coming Friday, April 4th. Until then, I’m looking forward to the sandbox MMO break and hope you’ll join me in this decidedly big change of pace.