Earlier this afternoon, Grinding Gear Games announced Path of Exile’s foray into in-game “pets” (with a twist!) coming with the new Sentinel league that will launch on May 13th and May 18th (PC/Mac and Xbox/PlayStation, respectively). Of course, every update has more than just one thing, and Sentinel brings endgame improvements and balance, revamped monster modifiers, and some quality-of-life improvements to both the base game and the league. Sentinel will also herald the launch of full controller support for the PC.

What Sentinel does not have is any class balance changes! Grinding Gear Games’ Chris Wilson discussed the changes — and the not changed — during the worldwide livestream reveal of Sentinel. There are tons of details, so we’ve also embedded the full stream so you don’t have to miss any of them. 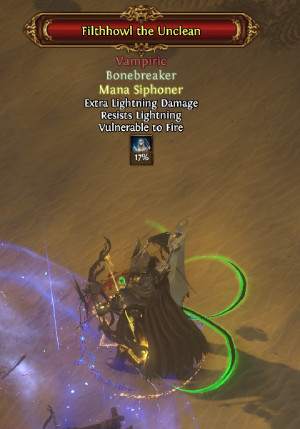 Beyond the league: No class balance!

For the first time ever, there will be no changes to class balance at all in Path of Exile. Wilson explained to me that this is an experiment: If it goes well, then it might happen occasionally going forward, though definitely not all the time. The idea behind doing no class balancing is that players can take the knowledge they already know about classes and hit the ground running right at Sentinel’s launch. Because they already know how the classes will work, there is no need to relearn things. While the team has to wait and see how this method is received, Wilson believes that many regular players will be positive toward this, whereas those who look forward to studying and creating new builds may be less inclined toward it.

While the character classes didn’t get any balancing or modifications this time around, the monsters still did. Wilson noted that most of the monsters’ modifiers were developed over a decade ago, so they were due for some freshening up. Here’s how he put it:

“What we need is a set of new mods that are highly impactful in combat, keyworded with one to two colored words that are easy to read at a glance, and capable of producing dangerous combinations. This is exactly what we designed the Archnemesis mods to be — a replacement for the core monster mod pool.”

He told me that from update 3.18 onward, all previous monster mods have been replaced by Archnemesis mods. However, GGG has not retained any other part of the Archnemesis league, so there is no inventory or recipe management involved. Instead, magic monsters have one archnemesis mod shared across their pack, and rare monsters will typically have two mods.

While there is no change in class balance, that does not mean there are no other changes to the game. The rest of the Sentinel update homes in on improving the new endgame that was introduced in Siege of the Atlas, which focused on giving players control over the type of content they want to play. Sentinel doubles down on this concept, giving players more ways to make the endgame experience match their own play.

First, Sentinel introduces 20 powerful keystone passives to the Atlas tree. Here are a few examples: The Singular Focus keystone makes it significantly more likely that players’ favored maps will drop, whereas the Stream of Consciousness keystone prevents players from modifying maps with fragments or scarabs (but when extra content is being rolled, each of the base chances is 50% higher). The Wandering Path keystone (which increases the effect of all small passives on the Atlas skill tree and disables all notable passives) and the Grand Design keystone (which increases the monster pack size in each map by an amount proportional to the number of notable passives you have allocated) are meant for very advanced players who have completed their atlas trees and want to get a very specific outcome with all of their skill points.

Next, Sentinel also introduces two types clusters of passives, sealed domain and secular focus. These allow players to seal away types of maps they don’t want to play so they wont be dropped or focus on the ones they do want to drop.

Finally, uber versions of seven of the pinnacle boss fights have been added; players can access these via six new keystone passives. Wilson told me that “these fights are designed to challenge the absolute best Path of Exile players and suffice to say, they’re brutally difficult.”

Another quick note about a endgame changes is that maps no longer drop from just the boss, so players can just rush a map to the boss to farm them. Instead, maps will drop off a random mob within the map. Also, there are adjustments to altars.

Wilson pointed out that Path of Exile’s challenge system hadn’t changed for the last 21 leagues. That’s a long time! So for Sentinel, the team drew on its experience to find easy ways to update it. The result is a plan to retain the model of 40 challenges with rewards that unlock as players progress through them, but adding a goal of providing substantially more challenge (and rewards) to end-game players. As Wilson explained,

“In order to achieve this, we have crunched down the easier challenges so that the first reward unlocks after only 6 and the second at 12. These are equivalent in difficulty to 12 and 24 challenges from the old system, respectively. This change gave us a lot more space to ramp up to some incredibly difficult challenges towards the end, which will take a lot of time and skill to complete. There are now ten different rewards you can unlock, which comprise two complete armor sets, each with a pair of wings. But be warned, the challenges you must complete are much, much harder than any that we have ever set you before.”

New uniques by the payers, for the players

Every update has new unique items, but Sentinel has (another) twist! Besides new unique items at the new uber pinnacle boss fights, there are five uniques that have been created by players. The winners of the race to kill POE’s pinnacle bosses in the hardcore solo self-found mode got to collaborate with GGG on the design of a unique item that would drop from a boss in endgame. Wilson said that five unique will be features in Sentinel, and one more is coming in 3.19.

Of course, everyone always wants to hear about how PoE 2 is coming, and Wilson was happy to share that development going very well right now, especially since the team can work together in the office again.